The Real Impact of Crimean Sanctions (1). The State of the Sanctions Regime as of 1 February 2020 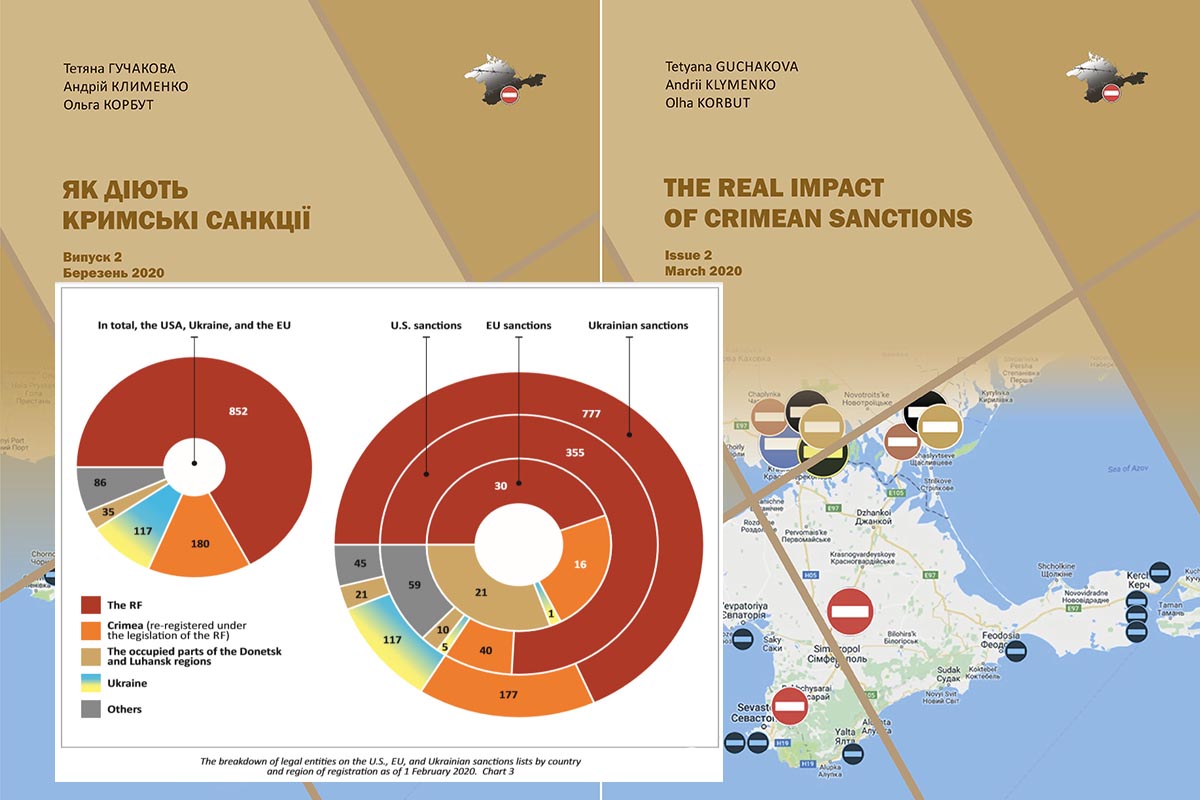 The BlackSeaNews presents a series of publications on the real impact of Crimean sanctions on Russia's economy:

The occupation and subsequent illegal annexation of the Crimean peninsula by the Russian Federation (hereinafter referred to as "the RF") in February-March 2014 and Russia's further aggression against Ukraine have become a turning point in the global history of sanctions.

Certainly, the use of various restrictive measures in an attempt to coerce a particular state to change its policies is a centuries-old practice. But the problem that we all have been facing since 2014 raises the stakes considerably. It challenges us to answer whether, in the 3rd millennium, the civilised world is capable of changing the aggressive policy of a nuclear power, a founder and permanent member of the UN Security Council, without the application of military force.

The authors hope that the results of our work that has spanned the 6 years of the occupation of Crimea and remains ongoing will make a valid contribution to the understanding of the subject.

In the spring and summer of 2014, the ﬁrst decisions on sanctions related to the occupation of Crimea became eﬀective. The active military phase of the Russian Crimea operation began on 20 February 2014 and ended on 18 March 2014 with legitimising the fake "referendum", which was held in already occupied Crimea on 16 March 2014, in the RF.

The programme of U.S. sanctions over Russia's aggression against Ukraine began on 6 March 2014, when U.S. President Barack Obama issued an Executive Order (EO 13660) "Blocking Property of Certain Persons Contribung to the Situation in Ukraine".

The decree declared the state of emergency and imposed personal sanctions: blocked assets and banned entry into the United States of persons responsible for or those who had directly or indirectly parcipated in the actions that undermined the democratic order in Ukraine and threatened peace, security, stability, sovereignty, and territorial integrity of Ukraine.

Executive Order 13661 of 16 March 2014, signed by the U.S. President, extended the scope of the state of emergency. Sanctions against a number of Russian oﬃcials imposed by the order included freezing their bank accounts, arresting their property, and refusing to issue them U.S. visas. While the EO listed seven names of those aﬀected, the order allows the Treasury Secretary to add to the list per agreement with the Secretary of State.

On 20 March 2014, Executive Order 13662 introduced the sectoral sanctions against Russia. The decree imposed sanctions on individual entities operating in the military and other sectors of the Russian economy.

On 27 March 2014, Resolution A/RES/68/262 "Territorial integrity of Ukraine" was adopted at the UN General Assembly 68th session 80th plenary meeting. It called upon "all States, international organizations and specialized agencies not to recognize any alteration of the status of the Autonomous Republic of Crimea and the city of Sevastopol... and to refrain from any action or dealing that might be interpreted as recognizing any such altered status".

This resolution set the basis for the system of international legal acts on the annexation of Crimea and the related sanctions.

On 25 June 2014, the ﬁrst European Union Regulation 692/2014 came into force, which banned the import of goods from Crimea and Sevastopol to the EU countries as well as the direct or indirect provision of ﬁnancial services for such import, including the insurance and reinsurance services.

On 19 December 2014, the U.S. President signed another Executive Order, No 13685, directly related to the Russian occupation of Crimea. The decree prohibits the import or export of goods, services or technologies from or to Crimea, as well as any new investment in the Crimea region of Ukraine by a United States person, wherever located.

The Crimean sanctions prohibit ﬂights of aircraft and calls by sea-going vessels, export and import of products and services to/from the territory of Crimea, including ﬁnancial services, insurance, leasing, investment, tourism, lending, and contracts with enterprises operating under the jurisdiction of the RF on the territory of Crimea and so on

The Oﬃce of Foreign Assets Control (OFAC), a unit of the U.S. Department of the Treasury, supervises the administration and implementation of the sanctions.

Additionally, since the spring of 2014, the elements of the continental blockade of Crimea from mainland Ukraine have started being implemented (see the map). 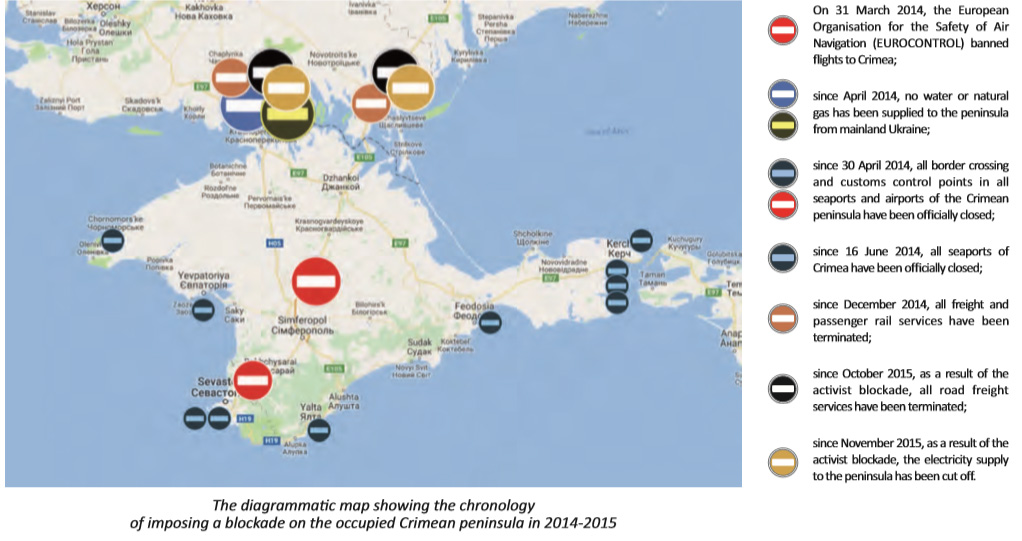 From the end of 2015 to May 2018, the Crimean peninsula de facto turned into an island, creating an entirely new reality both for Crimea and for the RF.

From late 2015 to May-December 2018, when the motorway part of the Kerch bridge became operational, cargo between the RF and Crimea was delivered by sea only, while passengers – in roughly equal shares by sea and air via the Kerch Ferry Terminal and Simferopol airport, and only from the territory of the RF.

Only the passage of citizens and private cars with a capacity of up to 8 passengers is now allowed across the administrative boundary between Crimea and the Kherson region of Ukraine.

It is worth noting that, according to the Ministry of Resorts and Tourism of Crimea, before the occupation, in 2013, 66% of passengers arrived in Crimea by rail, 24% – by road, and 10% – by air. Passenger sea traﬃc was insigniﬁcant.

The sanctions, combined with the transport blockade, cuting oﬀ the electricity, gas, and water supply to the Crimean peninsula, forced the RF to incur unanticipated huge additional costs for the urgent purchase of ferries, construction of new port berths, the underwater power cable, the gas pipeline, and the Kerch Strait bridge.

Therefore, the transport and infrastructure blockade, coupled with other sanctions, forced the occupying state to incur unanticipated huge addional costs for the urgent purchase of ferries and construction of new port berths, as well as the Kerch Bridge. In 2016, Russia was also forced to promptly build the underwater power cable and gas pipeline across the Kerch Strait.

The State of the Sanctions Regime
as of 1 February 2020

U.S. sanctions over Russia's aggression against Ukraine have been imposed by the four presidential decrees (executive orders):

In the following years, new names were added to the U.S. sanctions lists (based on the decisions of the U.S. Department of the Treasury). The last update took place on 29 January 2020.

European sanctions have been imposed by the three EU Council regulations:

Ukrainian sanctions lists have appeared as decisions of the National Security and Defence Council and have been approved by decrees of the President with varying frequency since September 2015.

The latest current decrees are:

In total, the lists of legal entities under the Ukrainian, U.S., and EU sanctions include 1,270 enterprises, political and military organisations¹.

Chart 1 shows the overlaps between the lists in all combinations. They clearly show that it is too early to speak about the full synchronisation of the sanctions imposed by Ukraine, the USA, and the EU.

The ﬁrst U.S. sanctions against legal entities over Russia's aggression against Ukraine were imposed by the United States on 20 March 2014.

The ﬁrst legal entity was included in the EU sanctions list on 12 May 2014.

The ﬁrst Ukrainian sanctions list was approved on 16 September 2015.

As of now, the latest entity added to the sanctions base is the Russian Transport Company Grand Service Express, a railway operator that oﬀers passenger rail service between Russia and occupied Crimea over the Kerch Strait bridge, which was subject to U.S. sanctions on 29 January 2020.

In Chart 2, one can see an enterprise that was subject to sanctions before 2014. It is a Russian company that has been listed as a transnational criminal organisation by the U.S. TCO program since 2013 and was put on the Ukrainian list in 2018.

The enterprises on the sanctions lists registered on the territory of the Russian Federation account for:

On the consolidated list of legal entities that are subject to the U.S., EU, and Ukrainian sanctions:

There are 10% of such enterprises on the Ukrainian list. These include subsidiaries of Russian banks and numerous branches of Russian IT companies, which is logical in general;

• 7% – are registered in other countries, these are foreign, more often oﬀshore, reincarnations of Russian enterprises;
• 3% – are registered in the occupied parts of the Donetsk and Luhansk regions. A signiﬁcant proportion of them are political and military formations.

The above analysis shows that there are enormous opportunities to expand the sanctions against Russian enterprises over the aggression against Ukraine by synchronising the Ukrainian, U.S., and EU sanctions.

Our research has shown that during the years of sanctions, only 88 (6.9%) of the companies included in the sanctions lists were liquidated. For the most part, some changes in the status of businesses are noticeable after U.S. sanctions are imposed on them.

With the liquidation of an enterprise subject to sanctions, its function, which was the grounds for sanctions, does not disappear – it is transferred to another legal entity. Out of the 88 liquidated legal entities, 32 have oﬃcial successors, out of which only 11 are under sanctions.

1. The full database as of 1 February 2020 is available at the link hps://www.blackseanews.net/ﬁles/sanctions-01022020.pdf.
On the U.S. Sanctions list, an additional 10 entities that are included in other sanctions programmes have been added to our database: TCO (Transnational Criminal Organizations Sanctions Regulations); Syrian Sanctions Regulations; CYBER2. These legal entities are also on the Ukrainian list.