The Real Impact of Crimean Sanctions (5): the Imposition of U.S. Sanctions against Russian Plants over the Production of Warships in Crimea 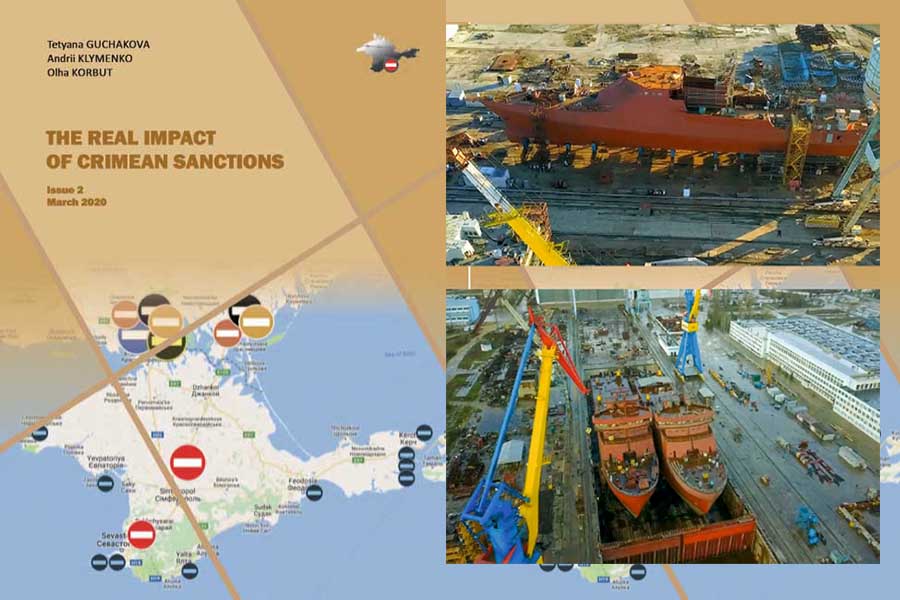 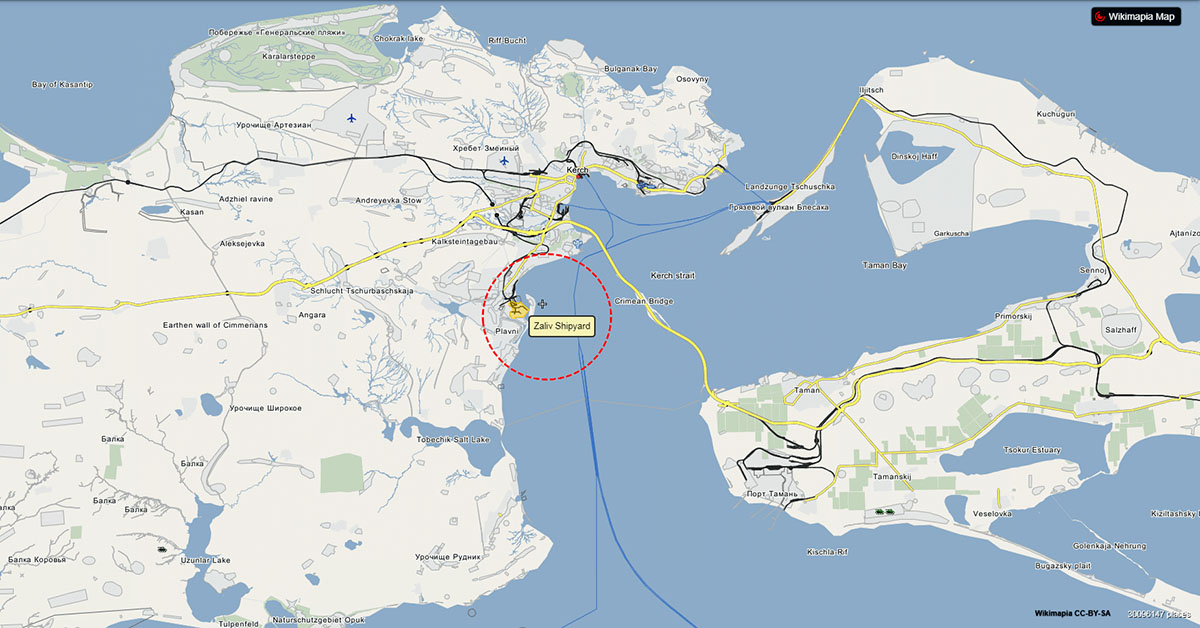 Zaliv shipyard (Kerch) on the map of Crimea, wikimapia.org

During 2018, numerous reports on the construction of warships at the seized Crimean Zaliv shipyard and other enterprises were published¹. The publications mentioned the following:

AO Zelenodolsk Shipyard Plant, named after A.M. Gorky, the Republic of Tatarstan, part of the AO Ak Bars Holding company. It is one of the largest ship manufacturers in Russia and has surfaced in Crimea as a collaborator with Feodosia's Sklopastic.

However, the Zelenodolsk Shipyard Plant's main "success" on the peninsula is its illegal seizure of the property of the Kerch Zaliv shipyard in August 2014, where many ships for the Russian Navy are now being built.

PAO Zvezda (St. Petersburg) is the only RF's manufacturer of diesel engines for power plants of Project 22800 Karakurt small-size missile ships that are being built at the Morye shipyard.

AO Kontsern Okeanpribor (St. Petersburg) is Russia's leading enterprise in the development and supply of hydroacoustic weapons to the Russian Navy and for export. In 2017, the Morye shipyard began the construction of an experimental multi-role high-speed vessel of Project 03550 Sleming-2, which is being built under a state contract for the experimental development concluded between the Ministry of Industry and Trade of the Russian Federation and AO Kontsern Okeanpribor. 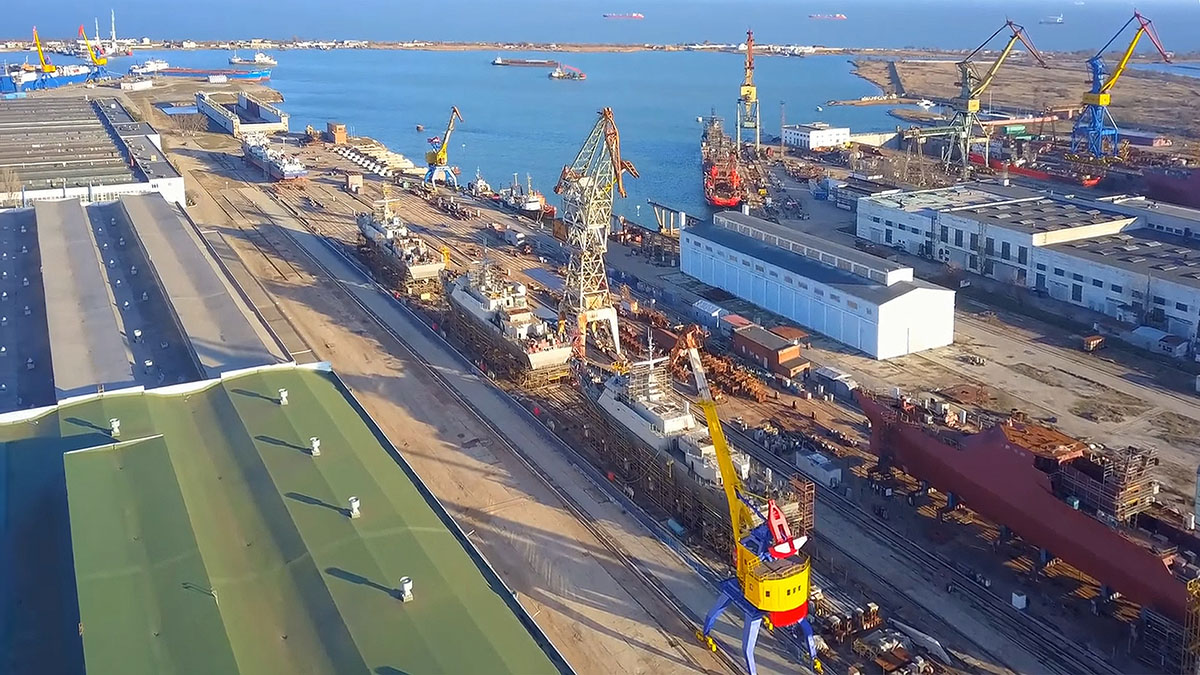 A panoramic view of the Zaliv shipyard facitities. On the right-hand side of the largest shipbuilding docks in Europe: at 364 metres long and 60 metres wide, Zaliv has one of the largest shipbuilding docks in Europe that has no equivalents in the RF. The Sevastopol and Vladivostok attack helicopter carriers for Russian Black Sea fleet to be built here in May of 2020. Photo from the BlackSeaNews archive, February, 2020.

On 15 March 2019, the U.S. Department of the Treasury announced the imposition of sanctions on the following enterprises²:

PAO Zvezda (Zvezda) is a supplier of diesel engines to the Russian Navy.

Zvezda has also supplied components for Russian naval vessels that were being built at the Federal SUE Shipyard "Morye" in Crimea. Zvezda is being designated pursuant to E.O. 13662 for operating in the defense and related materiel sector of the Russian Federation economy.

Of course, military production at Crimean plants has not stopped. Since the unplanned suspension of the construction of the missile corvettes at the Morye shipyard in Feodosia, the Zaliv shipyard in Kerch has remained the only Crimean plant where a large-scale military shipbuilding programme continues. 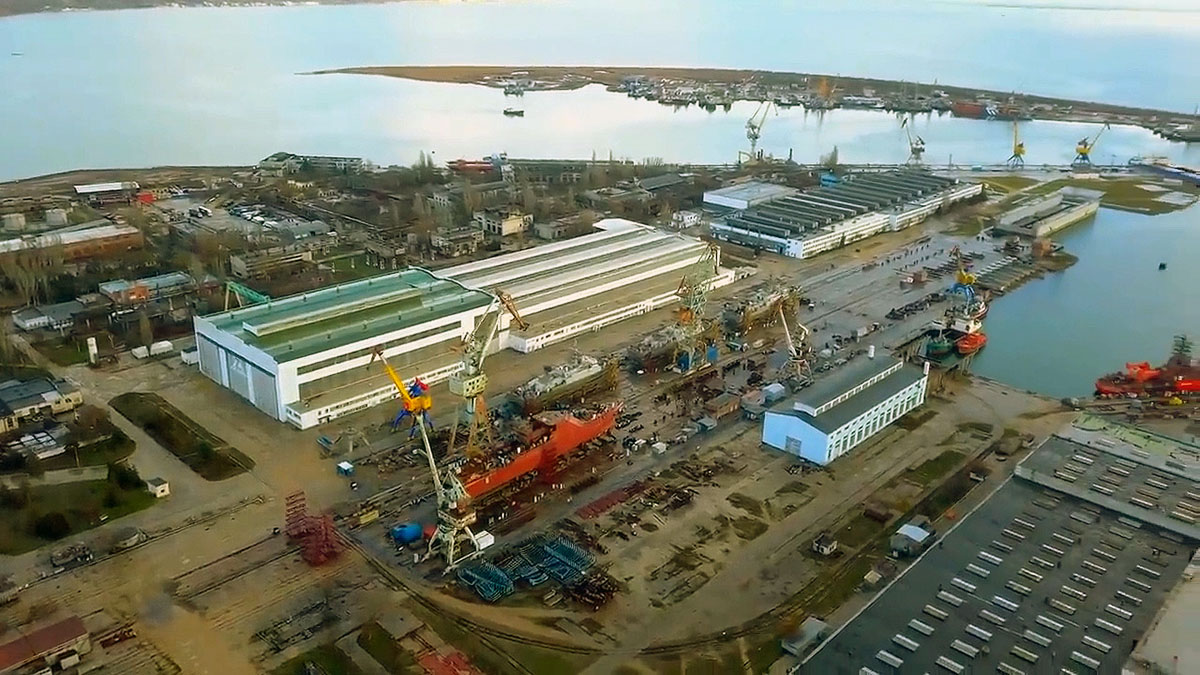 The view of the facilities of the Zaliv Shipyard. Photo from the BlackSeaNews archive, February, 2020.

As of 1 June 2018, as part of its state defence contract, the Zelenodolsk Shipyard Plant is building the following vessels for the Russian Black Sea Fleet at the Zaliv shipyard:

• the main ship of this project, Vasily Bykov, had been completed and on 25 March 2018, it headed from Kerch to Novorossiysk for state testing (in December 2018, it was commissioned into the Black Sea Fleet of the RF);

• the missile corvette Pavel Derzhavin laid down on 18 February 2016 is currently under construction, it is ancipated to be launched in 2019, the completion of construction is scheduled for 2020;

• the missile corvette Sergey Kotov was laid down on 8 May 2016. It is currently under construction and is anticipated to be launched in 2019, the completion of construction is scheduled for 2020.

the Tsiklon corvette was laid down in the summer of 2016;

the contracts have been signed for the Passat and Briz corvettes.

At the same time, the two cable vessels of Project 15310, Volga and Vyatka, are now being constructed for the Black Sea Fleet of the Russian Federation.

Those are large vessels with a deadweight of 8,000 tons, a length of 140 metres, and a width of 19 metres, whose purpose is to listen to or damage international submarine communication cables in the Arctic waters.

In addition, Zaliv is currently constructing for the Black Sea Fleet of the RF

All that poses a threat not only to Ukraine but also to practically all the EU states and the Mediterranean.

With that, we must point out that at 364 metres long and 60 metres wide, Zaliv has one of the largest shipbuilding docks in Europe that has no equivalents in the RF. Therefore, we anticipate that its use for the needs of the Russian military will continue growing.

As of 1 January 2020, the programme to construct warships for the Black Sea Fleet of the RF at the Zaliv shipyard, as part of the Zelenodolsk Shipyard Plant's state defence contract, is as follows:

• the Pavel Derzhavin сorvette launched on 21 February 2019 is being completed aﬂoat, the completion is scheduled for 2020; it has become the ﬁrst warship to be built entirely at the Zaliv shipyard; 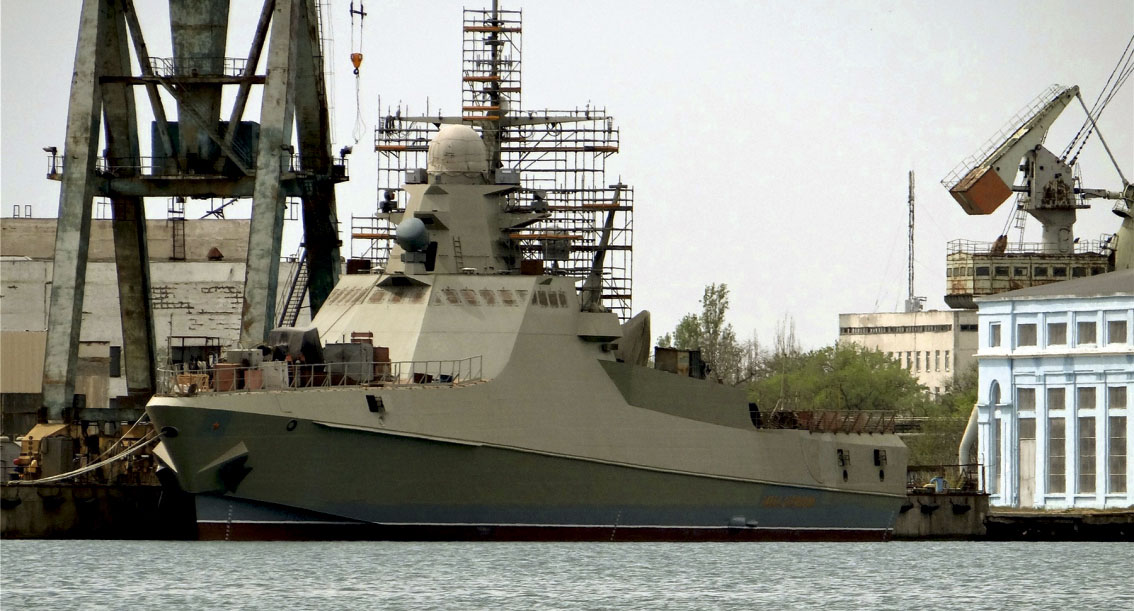 The Pavel Derzhaviin corvette of Project 22160 (yard number 163), laid down on 18 February 2016, the completion of construction is scheduled for 2020, is being completed afloat at the dockside at the Zaliv shipyard, May 2019. The photo from the BlackSewNews archive

• next to it, at the dockside, the rescue vessel Spasatel Ilyin (yard number 113) of Project MPSV07 is being completed; 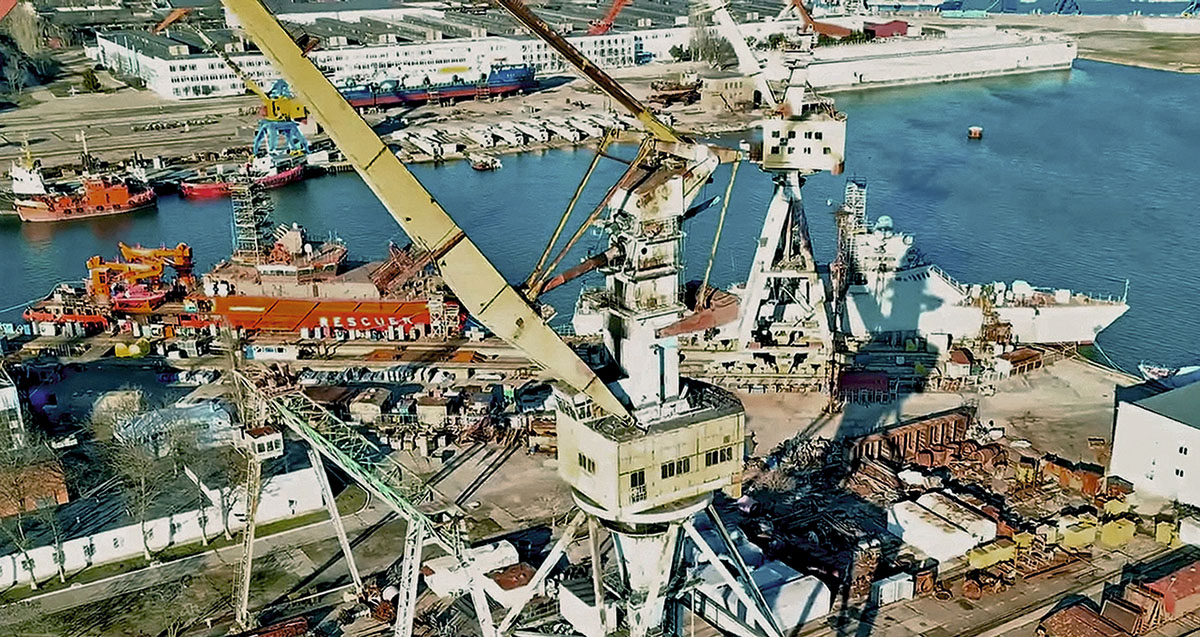 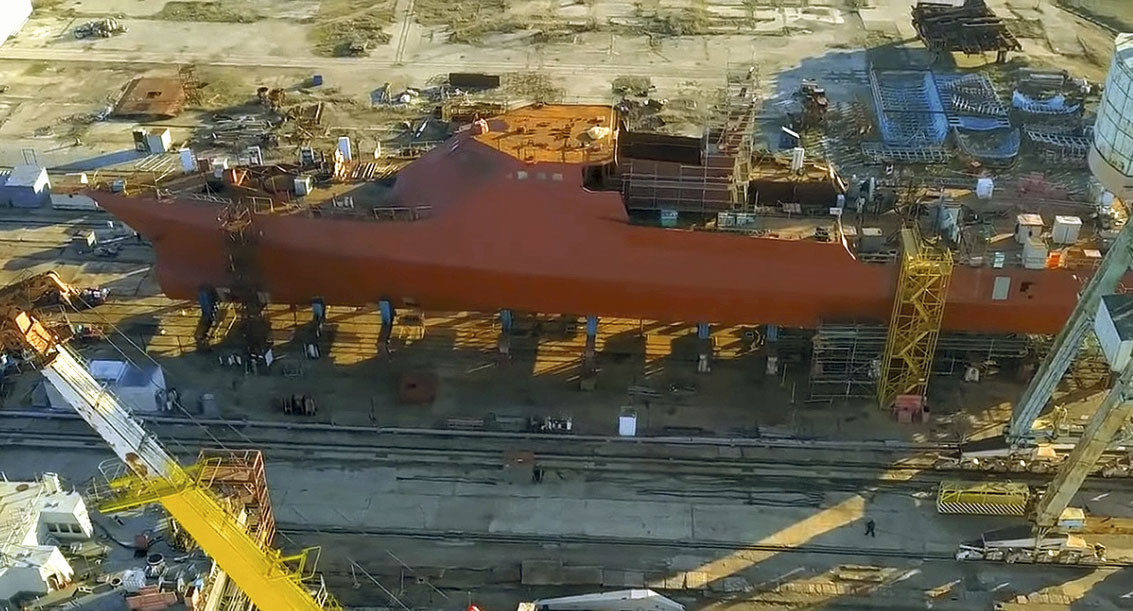 The Sergey Kotov corvette of Project 22160 (yard number 164) is under construction on the open slipway at the Zaliv shipyard. February, 2020. The photo from the BlackSeaNews archive

• all the three missile corvettes of Project 22800 Karakurt – Tsiklon, Askold, Amur (yard numbers 801, 802, and 803) – are under construction on open slipways, with all the hulls formed and equipment being installed; a gun has been mounted on the Tsiklon corvette, navigation equipment is being installed; 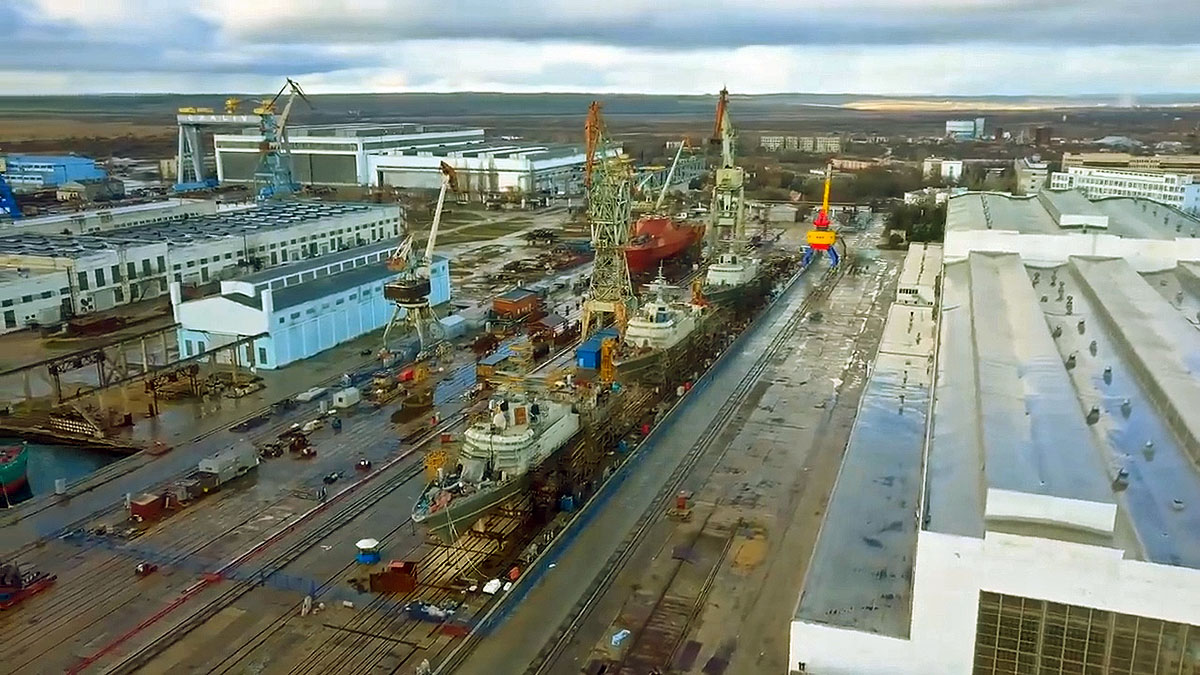 A general view of the open slipways of the Zaliv shipyard. In the foreground, from left to right, are the three missile corvettes, Tsiklon, Askold, Amur, of Project 22800 Karakurt. In the background is the construction of the Sergey Kotov corvette of Project 22160, January 2020. The photo from the BlackSeaNews archive 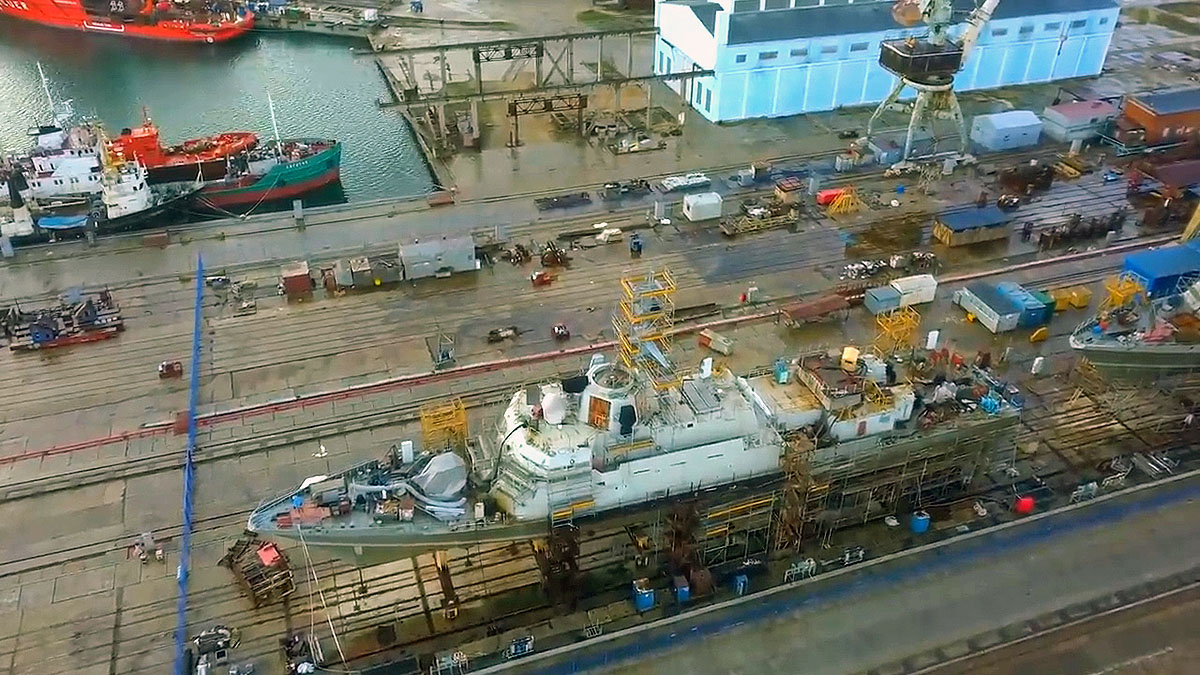 Tsiklon missile corvette of Project 22800 Karakurt, yard number 801 at the open slipway of the Zaliv shipyard. The construction has been performed as planned. February, 2020. The photo from the BlackSeaNews archive

• the construction of the Volga and Vyatka cable ships of Project 15310 is proceeding slowly due to the complexity of import substitution of foreign equipment. The Russian Navy expected to get them for its Northen fleet in 2018-2019... Now the deadlines have been postponed to 2021-2022). 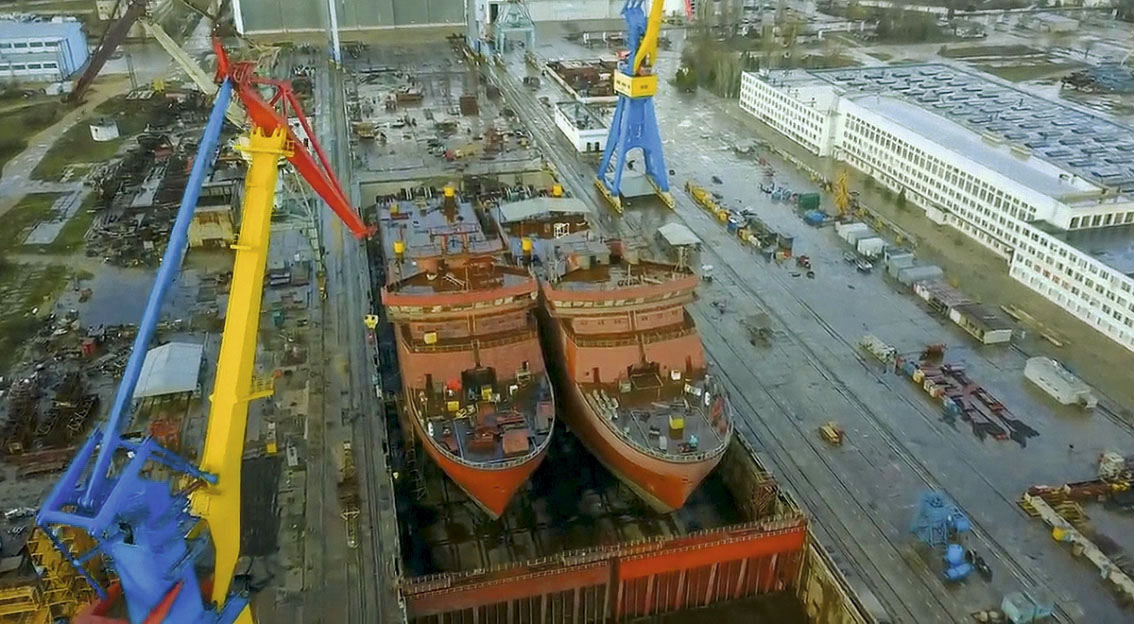 The Zaliv shipyard dry dock. The contruction of Volga and Vyatka cabel vessels for the Russian Navy with a deadweight of 8,000 tons, a length of 140 metres, and a width of 19 metres. The deadlines have been postponed to 2021-2022. January, 2020. The photo from the BlackSeaNews archive

The RF has ambitious plans and hopes for the Zaliv shipyard...

The displacement of the ships of the new for the Russian Navy class will be up to 25 thousand tons, the maximum length – about 220 m.

One such amphibious assault ship will carry more than 20 heavy helicopters on board, will have a well dock for amphibious boats, and will be able to carry about 1000 marines.

It is expected that they will be named Sevastopol and Vladivostok – the two similar in class French Mistral ships, the sale of which to Russia was cancelled after the Russian aggression against Ukraine began, had the same names.

The presence of such amphibious assault ships in the Black Sea Fleet of the RF will greatly enhance the Russian inﬂuence on the military-strategic situation in the Black Sea-Mediterranean region.

Note that the construction of warships of this class will require production cooperation with hundreds of plants in Russia.

The related companies in this project will have to cooperate with the two plants that are already under international sanctions, including the U.S. sanctions – the Zaliv shipyard in Kerch and AO Zelenodolsk Shipyard Plant, named after A.M. Gorky, the Republic of Tatarstan, part of the AO Ak Bars Holding company. 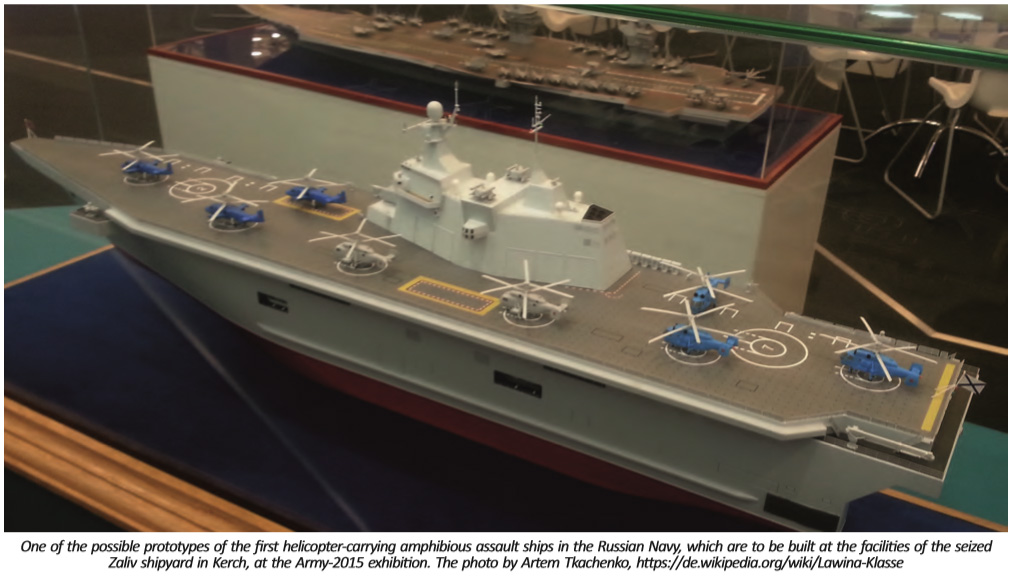