For Russia, the occupied Crimea is not only a huge military base, but also, a powerful component of its military-industrial complex.

At present, the process of technological integration of Crimean enterprises in the Russian military-industrial complex is complete, while its legal integration is nearing completion.

As early as April 4, 2014, at an ad-hoc meeting of the ministry's board, the Russian Defense Minister Sergei Shoigu announced his intention to provide the industry of the occupied peninsula with the state defense orders, emphasizing the importance of «effectively utilizing the manufacturing and technological potential of the Crimea defense industry».

In mid-April 2014, Russia’s Kommersant reported that the Ministry of Defense had already compiled the list of 23 Crimean enterprises of interest to the agency. Referencing its sources in the ministry, the newspaper reported that «It has been done in line with the directives of President Vladimir Putin and the process is being supervised by Deputy Minister of Defense Yuri Borisov. Currently, the proposals on the efficient use of the enterprises are being developed».

According to Borisov himself, «we will start working on ensuring the workload for the enterprises after finalizing all the formal procedures, such as licensing and re-registration».

Almost all Crimean defense companies are now either being swallowed by the large Russian corporations, leased by Russian enterprises or at least, have so-called «curators» in Russia.

The institute of such curators was officially introduced in 2016, when the Ministry of Industry and Trade of the Russian Federation ordered that the Crimean enterprises were assigned supervision. The responsibility of the curators is to share work orders with the factories they supervise and ensure their modernization.

That means that imposing sanctions against the seized Crimean enterprises does is meaningless without imposing them on the Russian defense enterprises affiliated with those.

This publication analyzes the activity of the RF in regard to the Crimean defense enterprises that are part of the Ukroboronprom concern.

At the beginning of 2014, the the Ukroboronprom concern included 13 enterprises, namely:

Of those 13, ten continue operations as separate entities.

By the order #118 from February 28, 2015 «On Certain Issues of the Property Nationalization», the occupation authorities of Sevastopol had «nationalized» the SE Radiocommunications Design Bureau and unofficially liquidated it thereafter.

SE Skloplastic has become part of the JSC Feodosia Shipyard Morye that after auctioning off will be transferred to the Kalashnikov concern.

The Monitoring Group of the Black Sea Institute of Strategic Studies, the BSNews and the Maidan of Foreign Affairs has identified 59 Russian companies that collaborate with the seized Crimean enterprises and therefore, are the primary candidates for sanctions.

Note that as of now, 52 of the 10 seized and 59 collaborating enterprises, are not on any sanctions lists at all.

All of the enterprises together with their sanctions status are listed in the two large tables below. 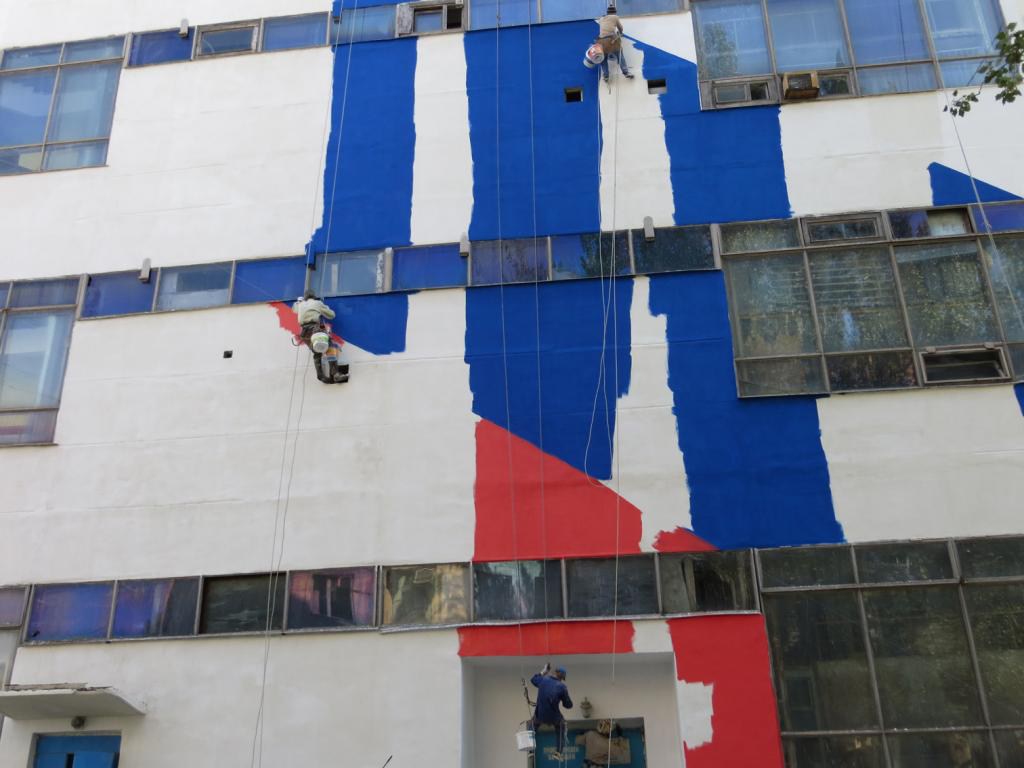 2014. Feodosia Optical Plant is being re-painted in the colors of the Russian flag.

The Russian companies that collaborate with the Crimean Ukroboronprom enterprises include:

1) JSC Pella Shipyard that leases 12 Shipyard Morye facilities for the construction of small missile vessels of the 22800 Karakurt project. Currently, three rocket ships are being built. Specifically for operation at the Morye Shipyard, Pella Shipyard has created its subsidiary Kaffa-Port, Ltd.

Also, JSC Pella Shipyard has been officially assigned to SUE RC Skloplastic in order to provide the latter with orders.

At the same time, the Pella Shipyard successfully operates in the German Hamburg at the J. Sietas Shipyard, acquired by Pella in March 2014. 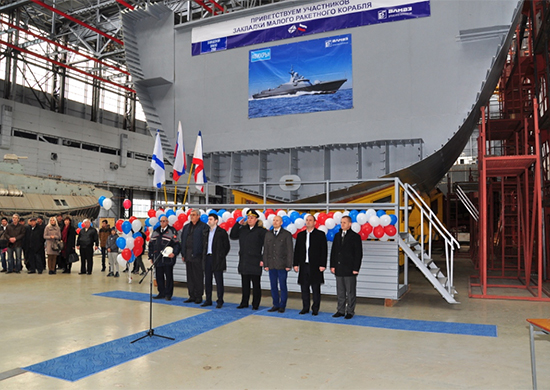 December 2017. The commissioning ceremony for Vikhr, the third missile boat of the Karakurt 22800 project, at the Morye Shipyard. Photo by the Russian Ministry of Defense.

In July 2017, it became known that the new generation of Scania E2011 engines (Sweden) were put into operation on the Project 23040 vessels.

In 2016, Morye shipyard was contracted by the JSC Zvezdochka Ship Repair Center, particularly its main branch Ship Repair Plant #5, to restore the shell of the corvette Kasimov.

According to the company, as of July 2017, DTB Sudokompozit had manufactured over 5000 m2 of middle-layer panels for the construction of a ship built at JSC Central-Nevsky Shipbuilding Plant.

6) JSC Zelenodolsk Plant named after A.M. Gorky, one of the largest ship manufacturers in Russia, part of the OJSC Ak Bars Holding company (Tatarstan). Has surfaced in Crimea as a collaborator with Feodosia’s Sklopastic.

The company’s main «success» on the peninsula is its August 2014 raid seizure of the property of the Kerch shipyard Zaliv, where many ships for the Russian Navy are now being built. Since Zaliv hasn’t been part of Ukroboronprom, it will be a subject of our future publications.

7) JSC United Shipbuilding Corporation. By the orders of the Ministry of Industry and Trade of the RF, it has been officially assigned first to SUE RC Skloplastic and later to SE Design and Technology Bureau Sudokompozit in order to provide those with orders. Is already on the Ukrainian and US sanctions lists.

9) JSC Admiralty Shipyard (St. Petersburg), a leading Russian company in the field of tanker and submarine shipbuilding. Collaborates with the SE Fiolent Plant.

1) JSC Almaz Central Marine Design Bureau (St. Petersburg), part of the JSC United Shipbuilding Corporation. Almaz is the developer of the project 22800 Karakurt small rocket ships that are being built at the Morye shipyard. The project was developed in 2015 on the basis of the Scorpion rocket and artillery boat project 12300 created by the same bureau in the 1990s.

2) OJSC Zvezda (St. Petersburg), is the only RF manufacturer of diesel engines for power plants of small project 22800 Karakurt missile ships that are being built at the Morye shipyard.

3) JSC Concern Oceanpribor (St. Petersburg), Russia's leading enterprise in the naval development and supply and export of the hydro-acoustic weapons.

In 2017, Morye Shipyard began the construction of an experimental multi-purpose high-speed vessel of the 03550 Sleming-2 project, which is being built under a state contract for the development of the OCP, concluded between the Ministry of Industrial and Economic Development of the Russian Federation and JSC Concern Oceanpribor. 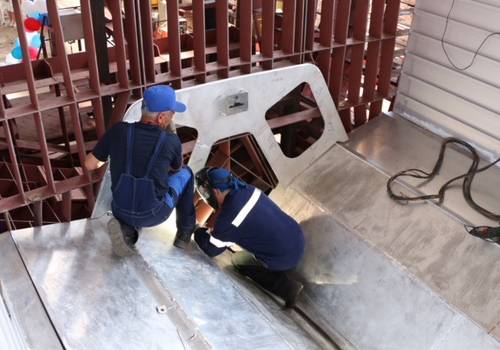 Construction of the experimental multi-purpose high-speed vessel Sleming-2 of the 03550 project. Morye Shipyard.

4) DM Technology, LLC (Moscow), a Russian manufacturer of water-jet technology, particularly, water jet drives and convertible marine engines. Participates in the development of the water-jet drive for the experimental multi-purpose high-speed vessel of the 03550 Sleming-2 project currently built at the Morye shipyard.

In addition, in 2016-2017, at the request of one of the power structures of the Russian Federation, the company was the first to create a high-speed multi-purpose boat to be used in the Sea of Azov.

7) SPB Marin LLC (St. Petersburg), provider of propulsion systems based on imported marine engines and diesel generators for shipbuilding plants of the Russian Federation. Is a distributor of Bukh (Denmark), a service dealer of Twin Disc Corporation (USA) and an official partner of Discom (The Netherlands). It is also a large supplier of propulsion systems based on Scania (Sweden) marine engines in the Russian Federation.

In 2016-2017 Marin delivered to the Morye shipyard a set of equipment for the A160-YR project diving boat, as well as completed its commissioning and testing.

In March 2016, the company announced the signing of a contract for the supply of two Scania DI 1642 M 10-53 engines for installation on the A160-YAR project vessel. 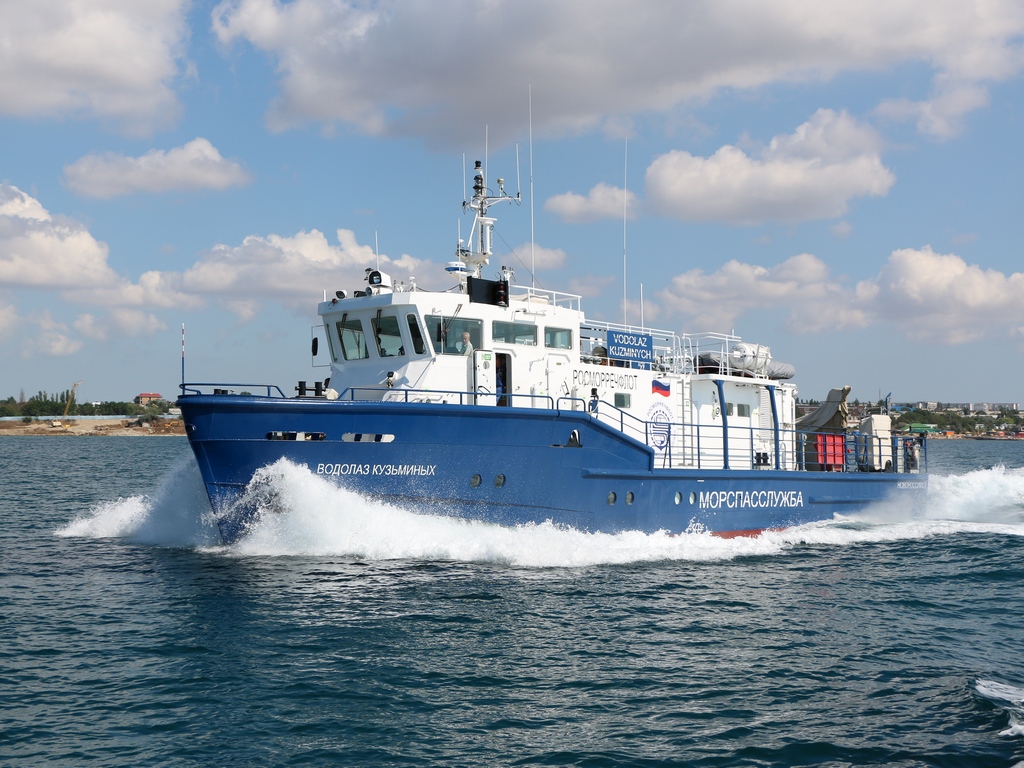 8) Energoremont, LTD (Moscow), specializes in comprehensive ship repair and maintenance, as well as repair of diesel engines and diesel generators.

By the order of the Ministry of Industry and Trade of the RF, Energoremont, LTD has been officially assigned to the Feodosia Ship and Mechanical Plant in order to provide the latter with orders.

13) OJSC Central Design Bureau for Marine Engineering Rubin (St. Petersburg), part of the JSC United Shipbuilding Corporation. A multifunctional marine engineering design bureau that has designed over 85% of the submarines that at different times were part of the Soviet and RF Navy. In addition, the company partners with oil and gas companies in developing equipment for the development of oil and gas fields on the continental shelf.

Many of the above enterprises have been noticed to collaborate with the Fiolent Plant.

1) PJSC United Aircraft Corporation, (Moscow). Is on the Ukrainian and EUsanctions lists. By the orders of the Ministry of Industry and Trade of the RF, UAC has been officially assigned to the SE Yevpatoria Aviation Repair Plant in order to provide the latter with orders. After auctioning the Yevpatoria Aviation Repair Plant, it will become part of the PJSC United Aircraft Corporation.

2) JSC Russian Helicopters (Moscow), part of Rostec. Is on the Ukrainian and US sanctions lists.

3) JSC Technodinamika Holding company (Moscow), part of Rostec, a leading Russian developer and manufacturer of aircraft equipment, including chassis, fuel and flight control systems and auxiliary power machinery. Is on the Ukrainian and US sanctions lists.

By the orders of the Ministry of Industry and Trade of the RF, the JSC Technodinamika was assigned to the SUE RC Scientific Research Institute of Aero Resilient Systems in order to provide the latter with orders.

According to the occupation "Ministry of Industrial Policy of the Republic of Crimea", after completion of the process of transformation of the State Unitary Enterprise of the Crimean Republic the Research Institute of Aerospace Systems" into a joint-stock company, the company will become part of the JSC Technodinamika. 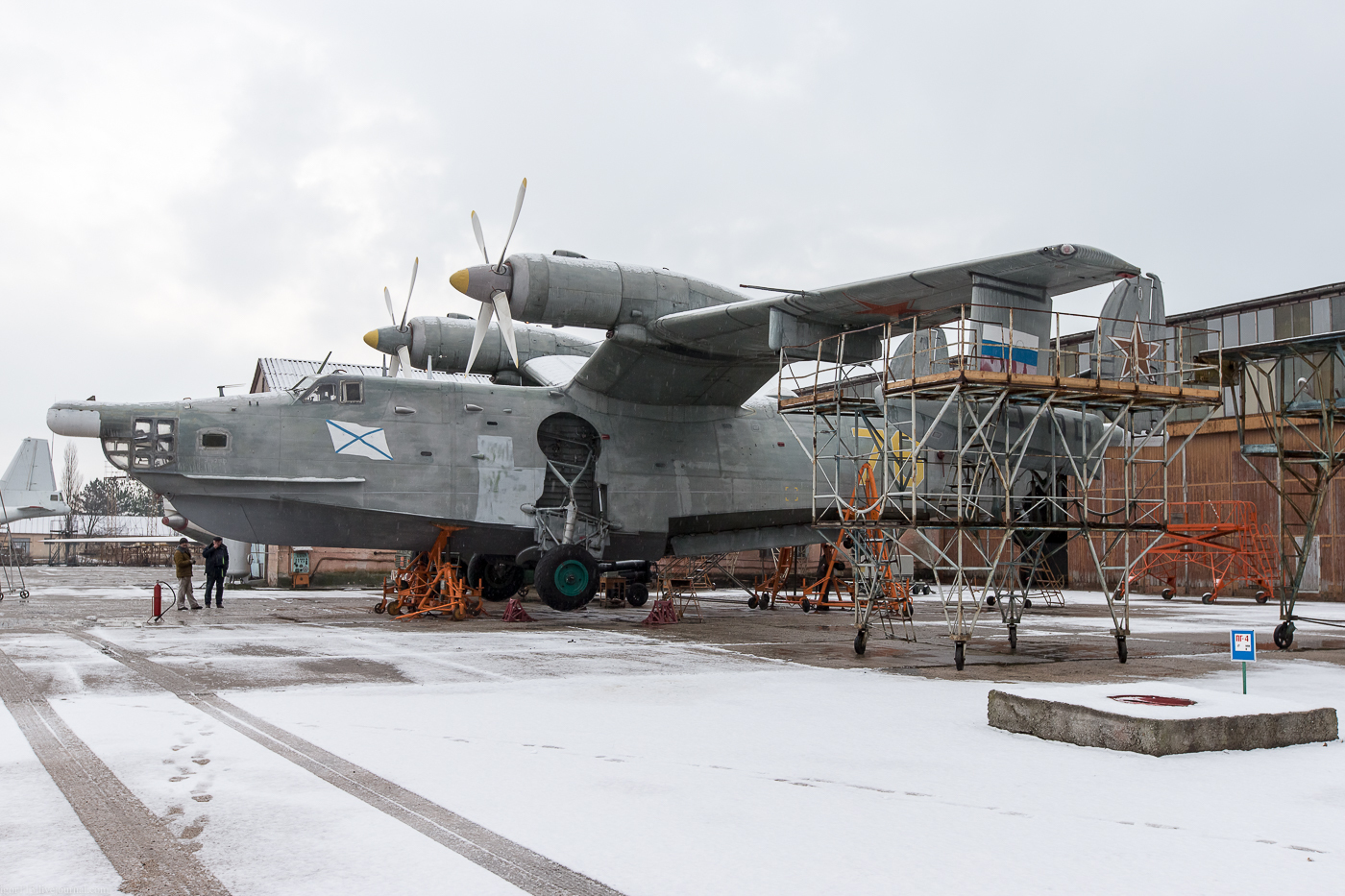 5) JSC 121 Aircraft Repair Plant, part of PJSC United Aircraft Corporation, a leading enterprise in repair and modernization of the tactical aviation aircrafts and engines. A separate subdivision titled Service Center Saki 121 ARZ has been created on the territory of the Evpatoria Aviation Repair Plant in Novofedorovka.

There are many other defense entities that collaborate with the seized Ukroboronprom enterprises.

One of the leaders is State Corporation for Assistance to Development, Production and Export of Advanced Technology Industrial Product ROSTEC (is on the Ukrainian and US sanctions lists) and the 10 enterprises that are part of it, excluding the aircraft and shipbuiding ones.

– JSC Kalashnikov Concern (is on the Ukrainian, EU and US sanctions lists)

– Shvabe OJSC Holding (is on the Ukrainian and US sanctions lists) and the following companies that it includes: JSC Shvabe Tech Lab, JSC Novosibirsk Instrument-Making Plant and OJSC Vologda Optical & Mechanical Plant

– JSC Remdiesel, a subsidiary of the PTC KAMAZ

For instance, JSC Remdiesel has developed and manufactured the Tornado K-53958 chassis for the Panzir-SM missile system. The Panzir-SM has been designed by the JSC Instrument Design Bureau named after Academician AG Shipunov and built by the JSC Shcheglovsky Val, while the Fiolent Plant has been one of the contractors. 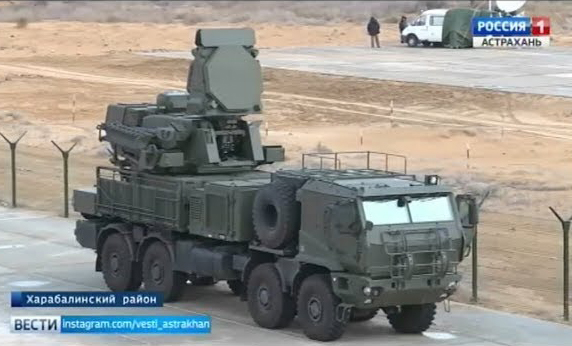 March 2018. A testing prototype of the Panzir-SM on the Tornado K-53958 chassis. A news report on the Russia-1 TV channel.

Another major company is the OJSC Research and production corporation UralVagonZavod (is on the Ukrainian, EU and US sanctions lists) and its member-companies, namely:

– JSC Ural Design Bureau of Transport Machine-Building, a research and development enterprise, 90% of the work is the development of military vehicles.

Also, there is the OJSC Concern Almaz-Antey with such member-companies as:

The list goes on to include the enterprises of the JSC Concern Granit-Electron, JSC Concern CSRI Elektropribor, PJSC Power Machines managed by Severgroup and several other independent defense equipment manufacturers.

For details, see the tables below.

Companies Connected to the Russia-seized Enterprises of Ukroboronprom

Activity of the Occupation Authorities in Regard to the Concern UKROBORONPROM Enterprises Seized in Crimea, and RF Legal Entities that Collaborate with Those (pdf)