The Real Impact of Crimean Sanctions (4). Missed Deadlines for the Production of Karakurt Missile Corvettes at the Morye Shipyard in Feodosia 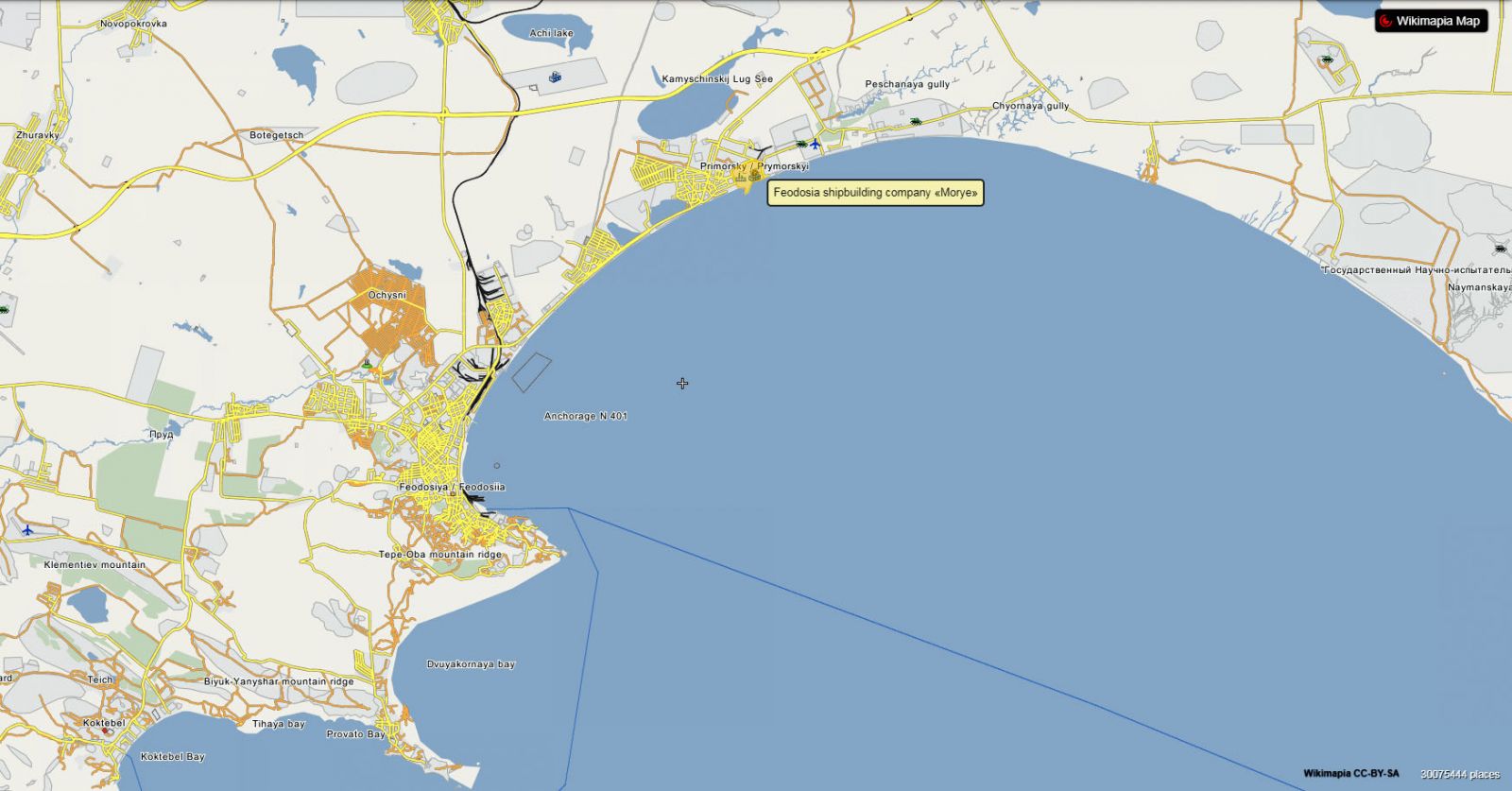 The Morye Shipyard, Ukraine's state-run enterprise is a part of Ukroboronprom concern. It is located in Feodosia (Primorske), occupied Crimea. 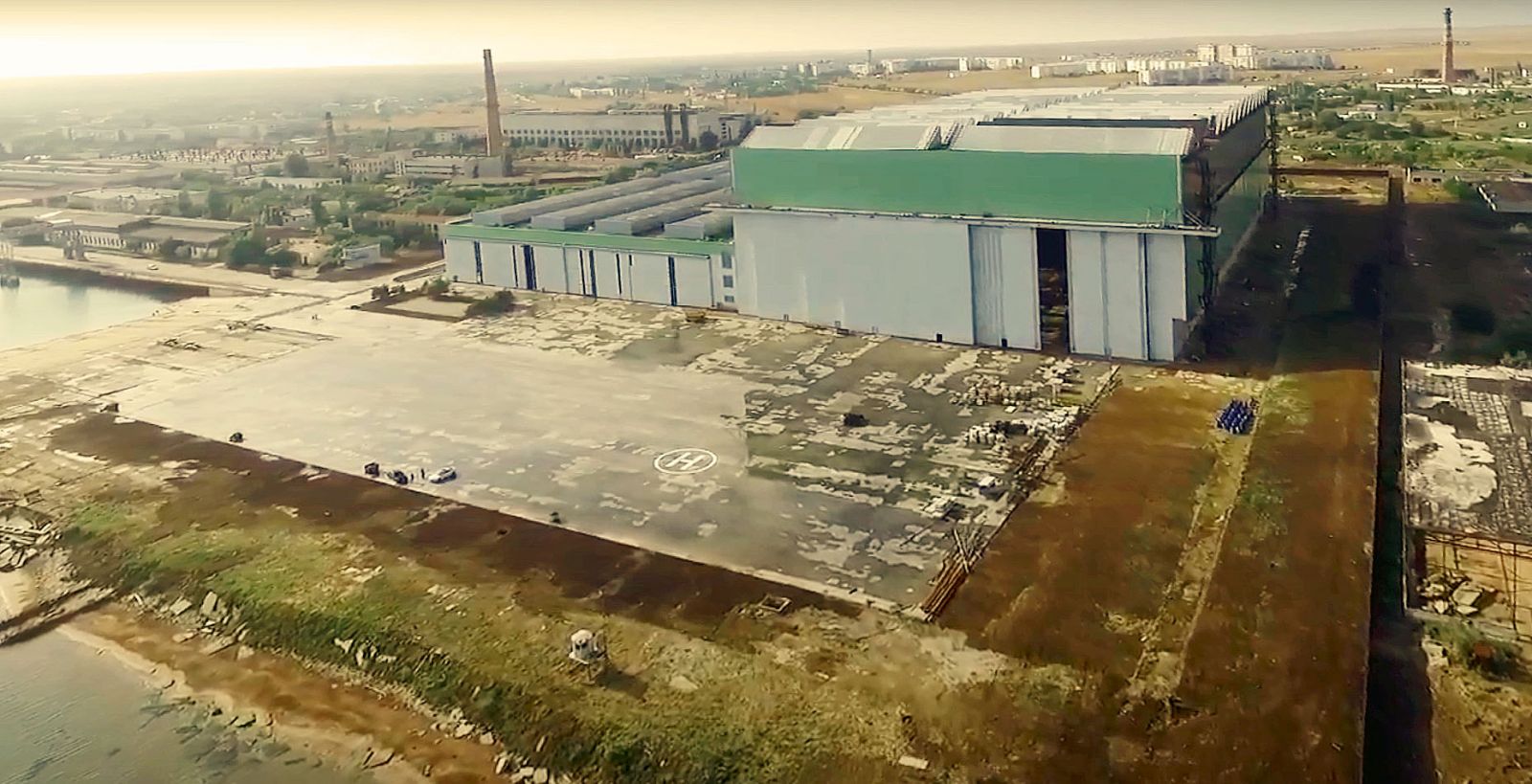 The view of the Morye Shipyard in Feodosia, Crimea, in January 2017. Photo: BlackSeaNews archive

On 21 June 2018, the proposals for new Crimean sanctions¹ were presented at a press conference at the UNIAN news agency (Kyiv). They were also formally submitted to the U.S. and EU embassies. The proposals read as follows:

Even before the "oﬃcial lease" of the Morye shipyard, on 10 May 2016, the Pella shipyard started building Shtorm, the ﬁrst in a series of 3 missile corvettes of the new Project 22800 (codename Karakurt), for the Black Sea Fleet of the Russian Federation, as part of the Russian state defence contract. The vessel is scheduled to be commissioned in 2019.

On 17 March 2017, the shipyard began the construction of Okhotsk, the second missile ship in that series, and on 19 December 2017 – Vikhr, the third corvette, both to be completed in 2019. 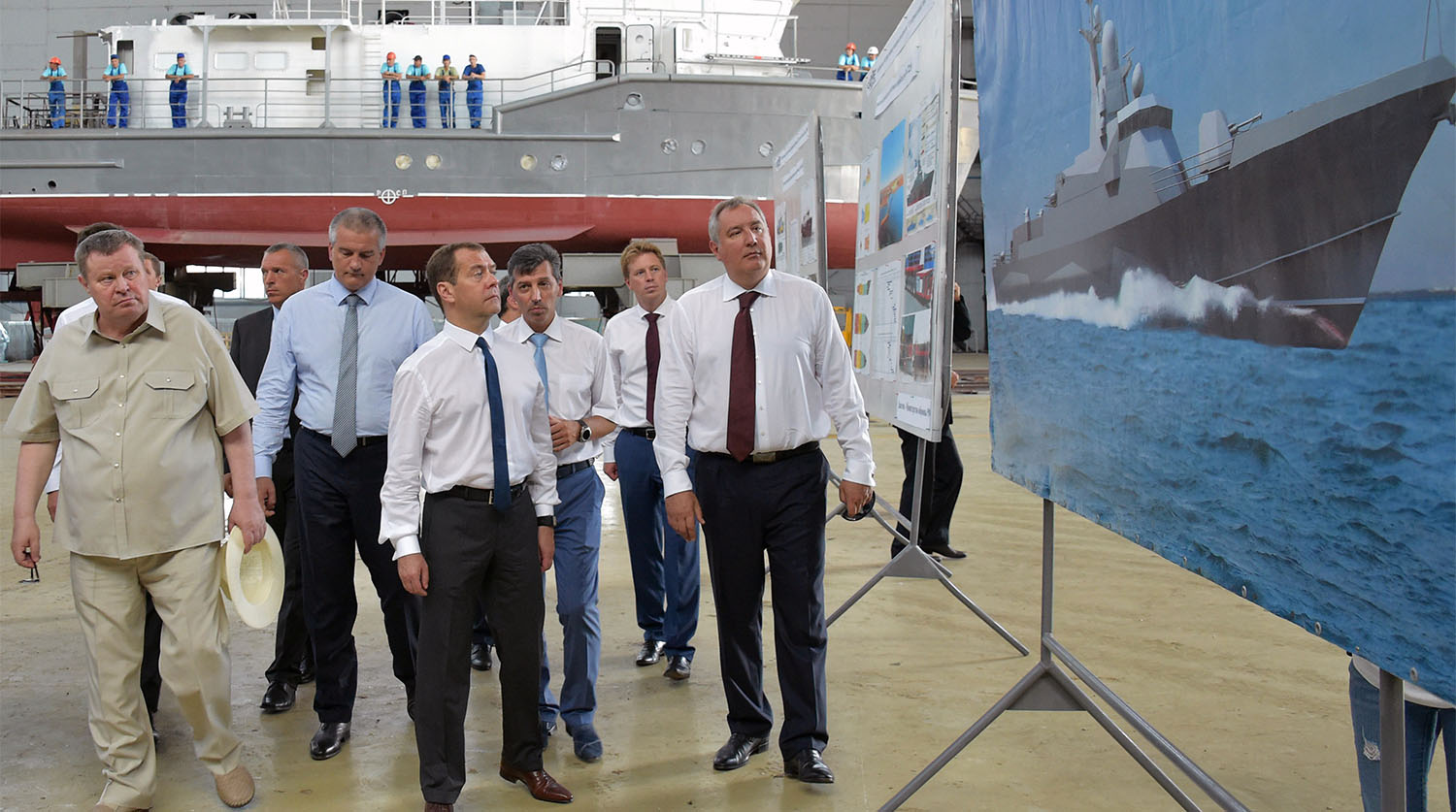 The RF's prime minister Dmitry Medvedev with the envoy to the Southern Federal District Vladimir Ustinov inspect the construction of Karakurt corvettes at the seized Morye Shipyard in Feodosia on 4 August 2017. https://www.gazeta.ru/politics/2017/08/04_a_10819105.shtml

Sanctions proposals by the Monitoring Group: blocking all Pella's assets and prohibiting U.S. and EU businesses from any collaboration with the OAO Leningrad Shipyard Pella².

The ﬁrst of the three "Feodosia Karakurts" – the Kozelsk small-size missile ship, yard number 254 (during laying down it was named Shtorm), was laid down on 10 May 2016, it was scheduled to be commissioned into the Black Sea Fleet in 2019, and was actually launched on 9 October 2019 in an unﬁnished condition.

On 17 October 2019, the GERMES tug (IMO 8920945) began towing the Kozelsk small-size missile ship from the Morye shipyard in Feodosia across the Kerch Strait to the Taganrog Bay of the Sea of Azov, where on 19 October it handed the towing over to the river tugs KAPITAN SHLYGIN (MMSI 273311220) and REYDOVIY 13 (MMSI 273360340), which both continued to tow it to Volgograd, and the latter – further to Kazan, where the Kozelsk small-size missile ship was transferred to other vessels to be towed up the Volga-Baltic Waterway (passing from the Rybinsk Reservoir through Lake Beloye, Lake Onega, the Svir River, Lake Ladoga, the Neva River, see the map on p. 13).

On 16 November 2019, the Kozelsk small-size missile ship was delivered to the Pella shipyard in Leningrad Oblast. The towing operation took 32 days. 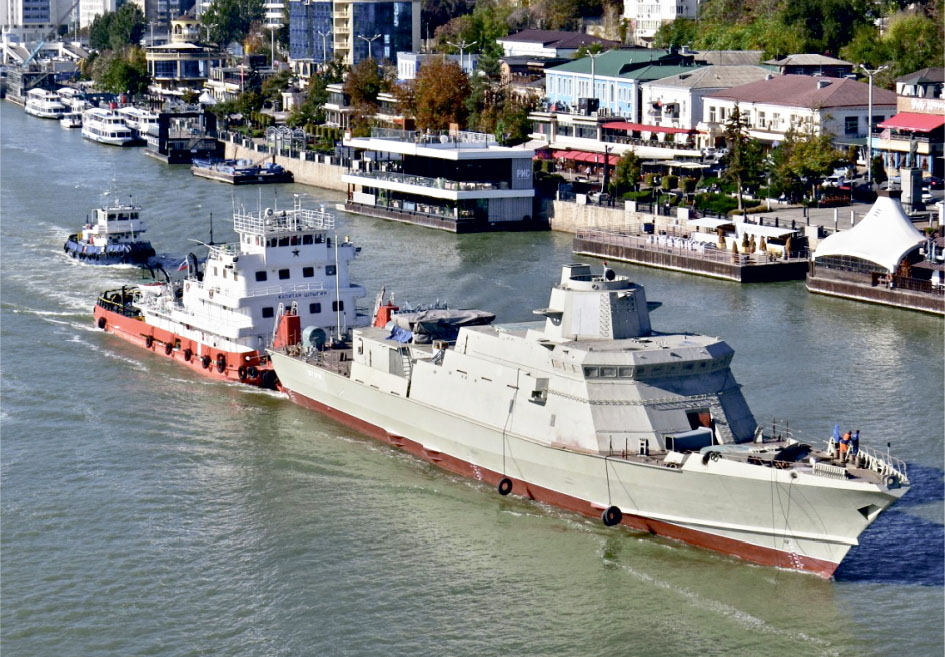 The Okhotsk small-size missile ship, yard number 255 (during laying down it was named Tsiklon), was laid down on 17 March 2017. It was scheduled to be commissioned into the Black Sea Fleet in 2019 and was actually launched on 29 October 2019.

It was immediately towed to Rostov-on-Don by the ANTEY tug (IMO 8020147), arrived at the Alexandrovsky roadstead, the Don River, on 2 November 2019, and on 6 November, the Okhotsk small-size missile ship was delivered for a temporary winter holding anchorage to the Aksay boat basin of the Port of Rostov-on-Don (the 2nd cargo area, 17 Levoberezhnaya St., stanitsa Olginskaya, Aksaysky District of Rostov-on-Don, the left bank of the Don River). 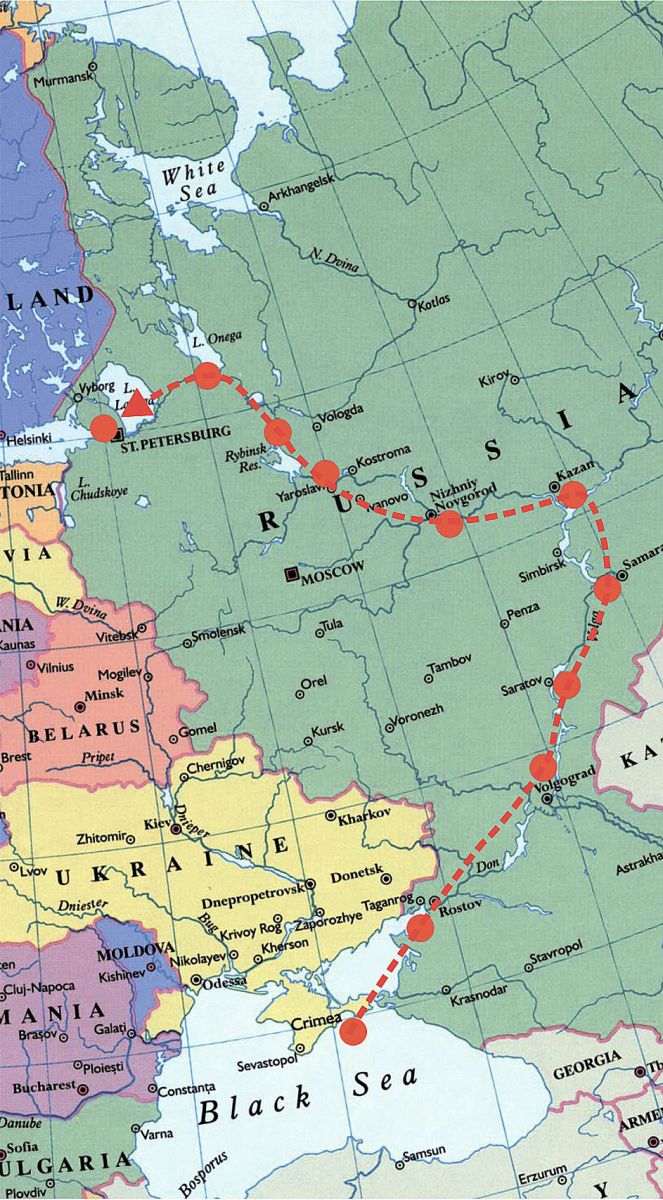 The towing route of the unﬁnished missile corvettes from the Morye Shipyard in Feodosia, in occupied Crimea, to the Pella Shipyard near St. Petersburg up the rivers of the RF.

The threat of sanctions has led to the suspension of the construction of the missile corvettes for the RF's Black Sea Fleet at the seized Crimean Morye shipyard and the sudden redeployment of the unﬁnished hulls of these ships.

This means that in order to avoid international sanctions, the Leningrad Shipyard Pella decided to suspend the construction of the three missile corvettes of the Karakurt Project simultaneously in October 2019, a year before the lease term expires; and it launched unﬁnished hulls of varying degrees of readiness and organised their towing to the Pella shipyard.

Note that the towing of the second and third ships started at a time when it was already clear that they would not be delivered to Leningrad oblast before the RF's inland waterways were closed to navigation (usually the navigation closes in mid-November).

That is, the two unﬁnished corvettes instead of staying in winter on the covered ways of the Morye shipyard in Feodosia will winter in the water area of the Don River, which will be frozen until April 2020, i.e. for almost six months. They will be able to reach their destination no earlier than mid-May 2020 after the navigation through the locks of the Volga-Balc Waterway opens.

Thus, even the mere threat of sanctions has led to the suspension of the missile corvettes construction at the seized Morye shipyard in Feodosia and to an increase of at least half a year in the construction time of these corvettes, which should have strengthened the missile capabilities of the RF's Black Sea Fleet.

1. https://press.unian.ua/press/10161413-u-maydani-zakordonnih-sprav-ﬁksuyut-aktivizaciyu-rosiyeyu-sprob-postaviti-pid-sumniv-efektivnist-sankciy-pro-neji-video.html 2. Details: New Economic Sanctions Against the RF in Connection with its Illegal Activity in Occupied Crimea https://www.blackseanews.net/en/read/142641