The Real Impact of Crimean Sanctions (6-8). The Peculiarities of Economic Processes in Russia and Occupied Crimea under Sanctions 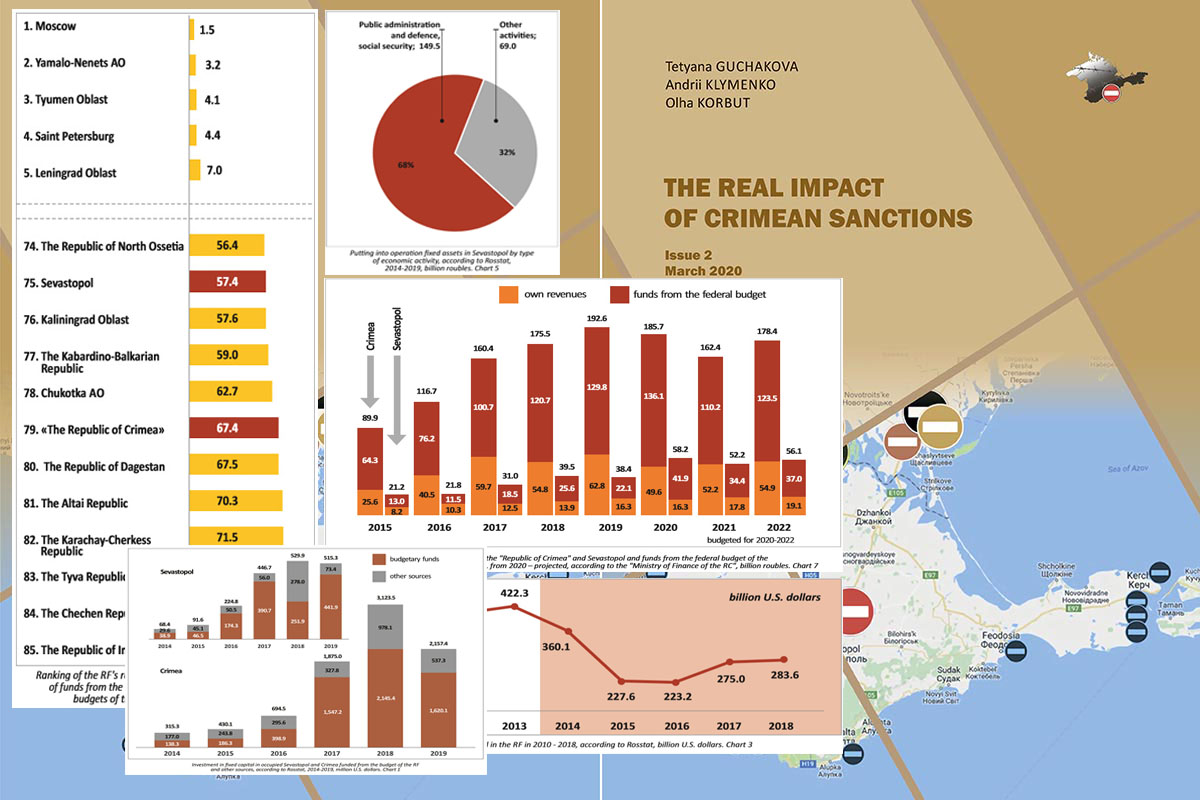 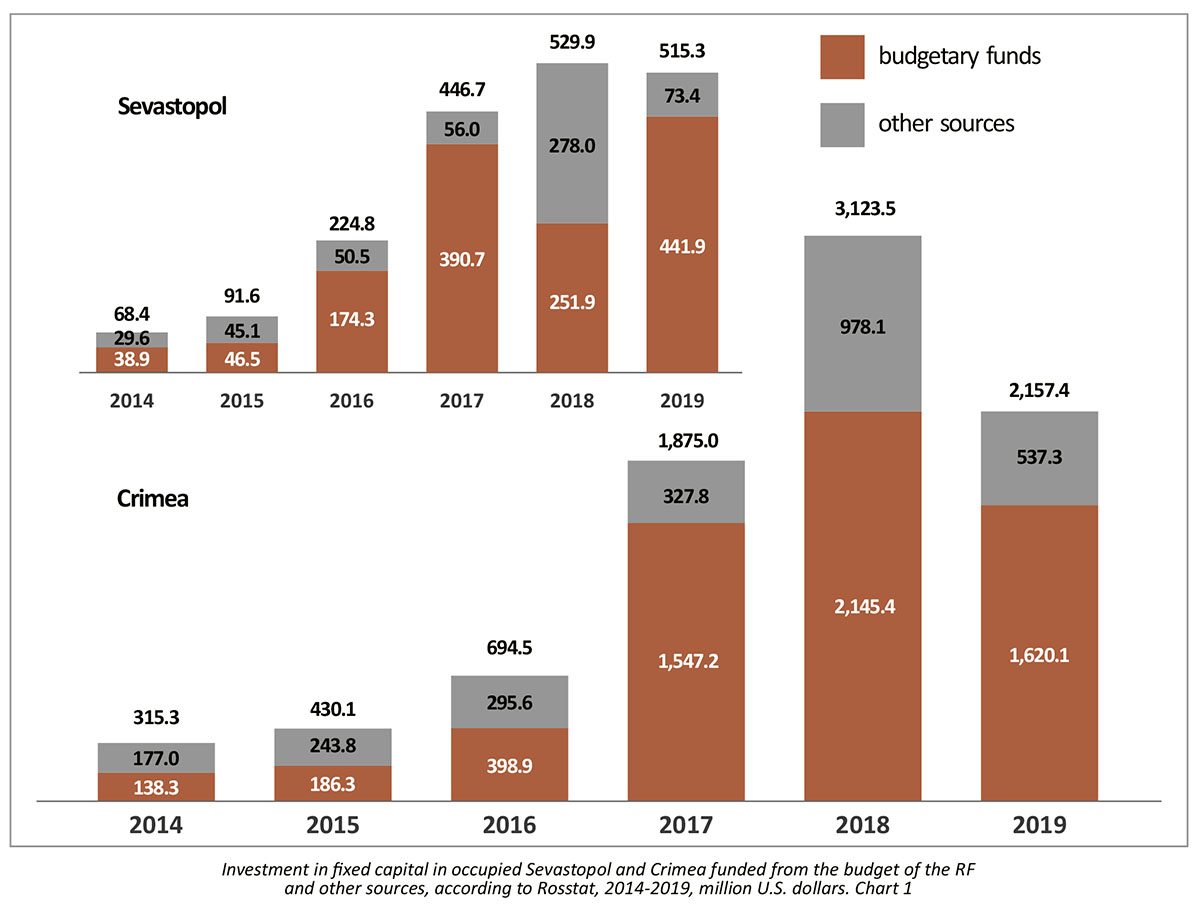 During the period of the occupation of Crimea, the authors repeatedly referred in their studies not only to the analysis of particular industries or types of economic activity but also to the peculiarities of general processes in the Crimean economy under sanctions¹.

At the time of this publication, the economic processes on the peninsula (for all their "exoticism" in the world of the market economy) have already become established for the long run. As long as there is the occupation and sanctions regime, no fundamental changes can be expected.

It is worth reminding that the ﬁrst year of the occupation – until the summer of 2015 – was the year of certain "imperial romancism". It was characterised by the "Russian nationwide fountain of optimism and investment ideas" of creating a "new showcase for Russia" on the seized peninsula – with "Silicon Valley", nanotechnology, a gambling zone, a "ﬂagship" free economic zone, and 7-star resorts...

For this purpose, on 31 March 2014, the "Ministry of Crimean Aﬀairs" was created, and later thousands of investment scouts from large and small corporations from Russia and other countries went to the peninsula.

The regime of international sanctions and blockade was a huge surprise for the Russian authories.

As early as the ﬁrst half of 2015, they realised the fallacy of their original concept, and on 15 July 2015, the "Ministry of Crimean Aﬀairs" was dissolved.

One year later, on 28 July 2016, the status of "new Russia" was lowered – the "Crimean Federal District", which had been created on 21 March 2014, on the third day after the act of annexation, was liquidated.

The so-called "constituent entities of the Russian Federation" the Republic of Crimea and the city of Sevastopol were merged into the Southern Federal District of the RF with the administrative centre in Rostov-on-Don.

The peculiarities of the real "economic model of Crimea", which can be described in two words: "militarisation" and "sanctions", should be taken into account when analysing the Russian statistics in general, and those for Crimea and Sevastopol in particular.

After the occupation and imposition of sanctions, these statistics turned into a propaganda tool and an instrument for concealing the real state of the economy.

In addition, the imposition of sanctions prompts the RF to hide an ever-increasing amount of information related to the occupied peninsula and activities that fall under or may fall under sanctions. All previously public information of the Russian Federation on state defence orders has been classiﬁed.

Therefore, some conclusions and generalisations can only be made by comparing the statistics and information ﬂow.

1. T. Guchakova, A. Klymenko. "The Socio-Economic Situation in the Occupied Crimea in 2014-2018". – Kyiv. 2019. "The Gray Zone". The Crimean Peninsula: The Four Years of Occupation". (The annual report "Occupied Crimea under Sanctions and Blockade in 2014-2017"). Edited by A. Klymenko. – Kyiv. 2018.
2. A. Klymenko. T. Guchakova. “The Militarization of Crimea as a PanEuropean Threat”. Based on the data gathered by the joint Monitoring Group of the Maidan of Foreign Aﬀairs, the Black Sea Institute of Strategic Studies, and the BlackSeaNews online portal (www.blackseanews.net). With contributions by O. Korbut. Kyiv. 2019

Russia's Investment in Fixed Capital in
Occupied Crimea and Sevastopol

According to Rosstat, during the years of the occupation, investment in ﬁxed capital in Crimea and Sevastopol has totalled $8.6 billion and $1.9 billion respectively. Of this investment, $6.03 billion (70.2%) in Crimea and $1.34 billion (71.6%) in Sevastopol was funded from the state budget (see Chart 1).

This was mainly the investment in the facilities under the so-called Federal Target Programme "The Socio-Economic Development of the Republic of Crimea and Sevastopol until 2020" (hereinafter referred to as "the FTP"), as shown in Chart 2. 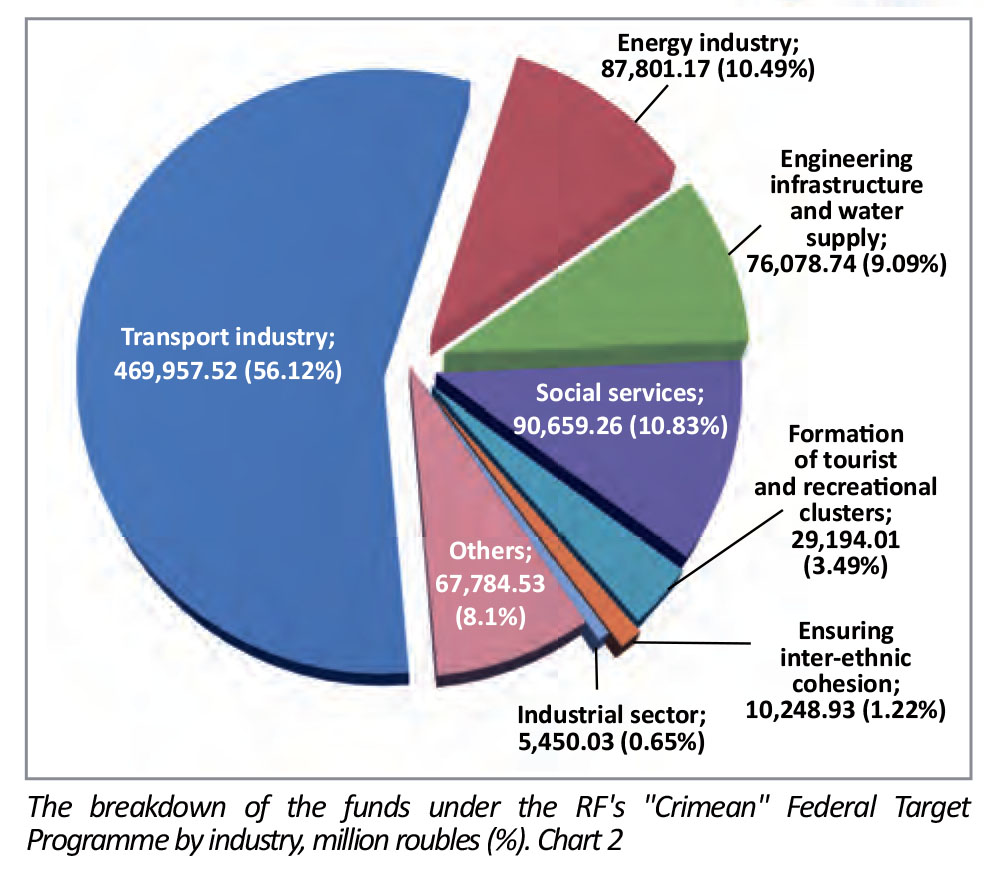 The authors have thoroughly analysed the FTP at various stages of its adoption, correction, and implementation.

• an underwater power cable and gas pipeline, road and railway bridges across the Kerch Strait;

• the Tavrida motorway from Kerch to Sevastopol;

• the reconstruction of the airport in Simferopol and many smaller-scale projects.

Apart from 70% of budget investment in ﬁxed capital, the considerable size of investment "from other sources" in occupied Sevastopol and Crimea during the occupation years – $532.6 million and $2,559.6 million respectively – deserves attention (See Chart 1).

• investments from enterprises of the military industrial complex of the RF in military production at Ukrainian plants seized as a result of the occupation;

• investment in the construction of road and energy infrastructure, other facilities under the FTP, the funds for which were allocated not directly from the budget of the Russian Federation, but through Russian state and quasi-private corporations or bank loans;

As the Russian economist Vladislav Inozemtsev explained, "since 2014, over 200 foreign companies have ceased their operations in Russia, and in 2018, Russian entrepreneurs closed their businesses 2.15 times more often than they started new ones. Only eﬀorts of the state, whose share in total investment reached 18%, excluding the investment programmes of state companies, helped avoid the collapse of investment in ﬁxed capital" (3).

Note that Russia's investments in infrastructure megaprojects on the territory of the Crimean peninsula were largely forced – the urgency of making these investments was a direct consequence of the occupation of Crimea, that is, of the international sanctions regime and the trade, transport, water, and infrastructure blockade by the mainland Ukraine caused by the occupation.

What Russian Investment Money is Spent on
in Crimea and Sevastopol

As the following topic is quite specialised, for the convenience of those readers who do not deal with accounting on a day-to-day basis, let us recall the following deﬁnition:

Fixed assets are tangible assets (such as property, plant, and equipment) held by an enterprise or organisation for using them in the production process or for performing management functions. Fixed assets have an expected life of more than one year (or longer than an operating cycle if it exceeds a year). 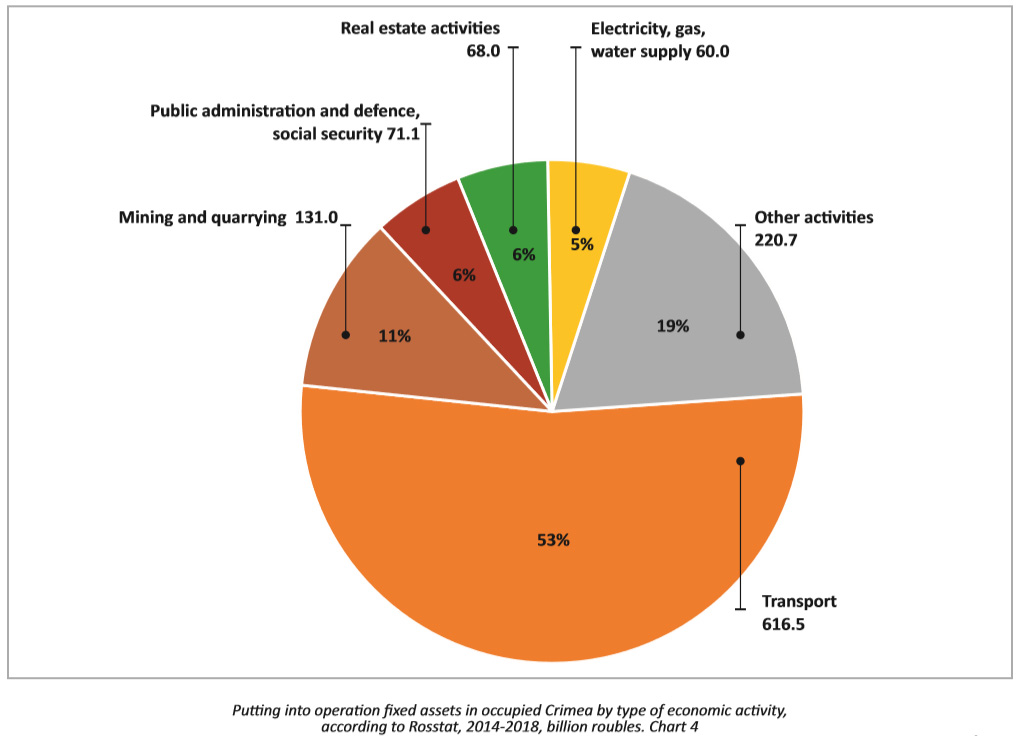 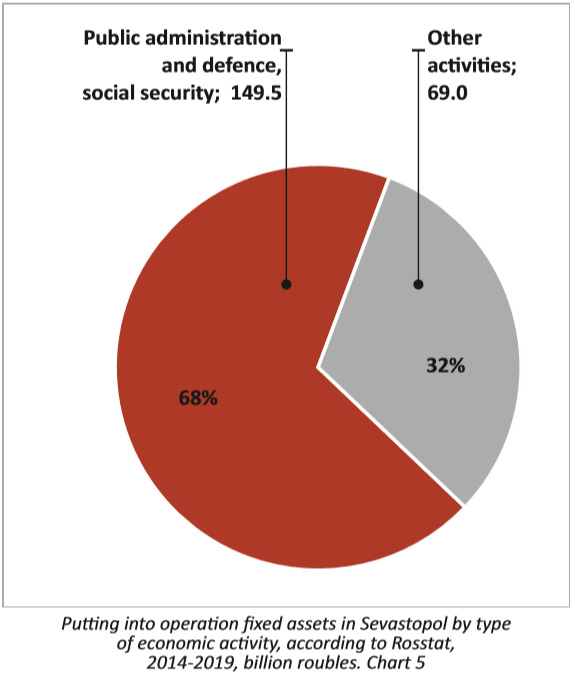 The presence of this topic in our review is explained by the results given in the charts (see Charts 4 and 5), above all – by the type of economic activity marked in red.

In the oﬃcial RF's classiﬁcation², this type of activity has code 84 and the name "Public administration and defence, compulsory social security".

The main ingredient of this Russian cocktail of military defence and social security is the activity listed under code 84.22, "Defence activies".

"...This class includes administration, supervision, and operation of military defence aﬀairs and land, sea, air and space defence forces such as:

• reserve and auxiliary forces of the defence establishment,

• health activities for military personnel in the ﬁeld... ".

Thus, the red segments of the charts, especially the one on Chart 5, which applies exclusively to Sevastopol, the main base of the Black Sea Fleet of the RF, indicates that over the years of the occupation, military facilities and equipment worth up to 150 billion roubles have been put into operation in Sevastopol.

These facilities and equipment were assigned to the Black Sea Fleet and naval aviation headquarters located in the city.

The fact that defence activities account for about 70% of ﬁxed assets put into operation in Sevastopol demonstrates which industry has been given the highest priority in the city's economy.

The so-called "Republic of Crimea" has somewhat diﬀerent tasks, which is shown in Chart 4.

Our analysis of Russian investment activity on the peninsula has demonstrated the following: the main reason for the existence of the occupied Crimea territory for the RF is to provide transport and critical infrastructure transit from the territory of the RF to the military base in Sevastopol across the Kerch Strait.

• providing logistics support – reliable and fast transportation of troops, armoured vehicles, missiles and shells, fuel and other supplies from the territory of the RF to military bases and airﬁelds located in or operated from Sevastopol;

• providing military facilities with engineering infrastructure – water supply, sewerage, heat supply, power supply, gas supply, and communication systems (the provision of this infrastructure to the population of the peninsula is funded residually);

• providing critical services, such as health care, trade, for members of the Russian armed forces, civil servants, law enforcement oﬃcers, and their families (the provision of these services to the rest of the population is funded residually).

The Heavily Subsidised Budget Model
of Crimea and Sevastopol

After 2015, it became clear that the regime of international sanctions and the blockade of the occupied peninsula by mainland Ukraine made not only economic development but also ﬁnancial selfsuﬃciency of Crimea and Sevastopol impossible.

Since then, the analysis of the budgets of Sevastopol and the "Republic of Crimea" has lost its economic sense. 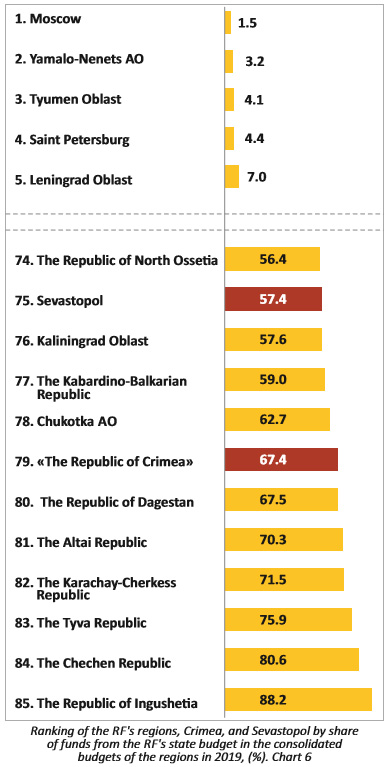 The basis and, at the same time, the main intrigue of the annual budgeting on the Crimean peninsula are the same – the size of the government subsidy from the Russian Federation.

That is, due to the sanctions the Russian Federation was forced to move to the only possible "economic model" for occupied Crimea, the main features of which are as follows:

• "the island of Crimea" is isolated from the civilised world and connected only with the Russian Federation by the bridge across the Kerch Strait, the underwater power cable and gas pipeline, and by air;

• almost 70% of the "island's" expenses are covered by the budget subsidies from the Russian Federation; some income comes from the sale of "trophy" Ukrainian property, the buyers of which are Russian companies and individuals subject to international sanctions;

• the reason for the existence of the "island" is perhaps the world's largest military base of global geopolical importance with the latest weapons; the main activities are the production, repair, and maintenance of military equipment, housing construction for the Russian military, intelligence oﬃcers, and oﬃcials;

• investment in "civilian" infrastructure projects is made to address the problems created by the occupation;

• the civilian, military, industrial, logistical, and service infrastructure of the "island" is created mainly on the basis of "trophy" Ukrainian property; its development and maintenance are funded by the Russian government – be it budgetary investments or the funds of state and quasi-private companies; this work is performed mainly by Russian companies subject to sanctions;

• all state-ﬁnanced projects, programmes, and investment carried out on the "island" also serve a traditional for the RF purpose of enriching those who are assigned to implement them.

In 2019, own revenues accounted for only 32.6% of the revenues of occupied Crimea's republican and municipal budgets; the remaining 67.4% of the funding came from the budget of the Russian Federation.

In terms of the level of subsidy, occupied Crimea is in the same group as the most subsidised regions of the Russian Federation: the republics of the North Caucasus (Chechnya, Ingushetia, Karachay-Cherkessia, Dagestan) and such remote areas as Altai, Tyva, and Chukotka.

A certain increase in revenues in 2019 was artiﬁcial – for this purpose, the legal addresses of some companies involved in the construction of the bridge across the Kerch Strait were transferred to Crimea for them to pay taxes to the Crimean budget.

Due to the completion of the megaprojects, such revenues are no longer projected (see Chart 7). 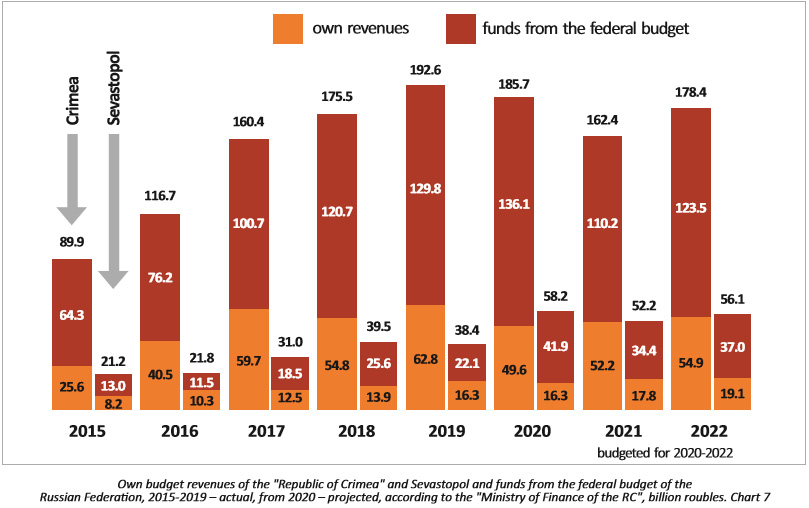 The slightly lower level of Sevastopol's dependence on subsidies is explained only by the fact that, as a result of the militarisation during the occupation, many members of the Russian armed forces and their families, who have quite high incomes and pay taxes to the local budget, have moved to the city. According to the authors' estimates, during the occupation, the population of Sevastopol has increased by at least 15%.