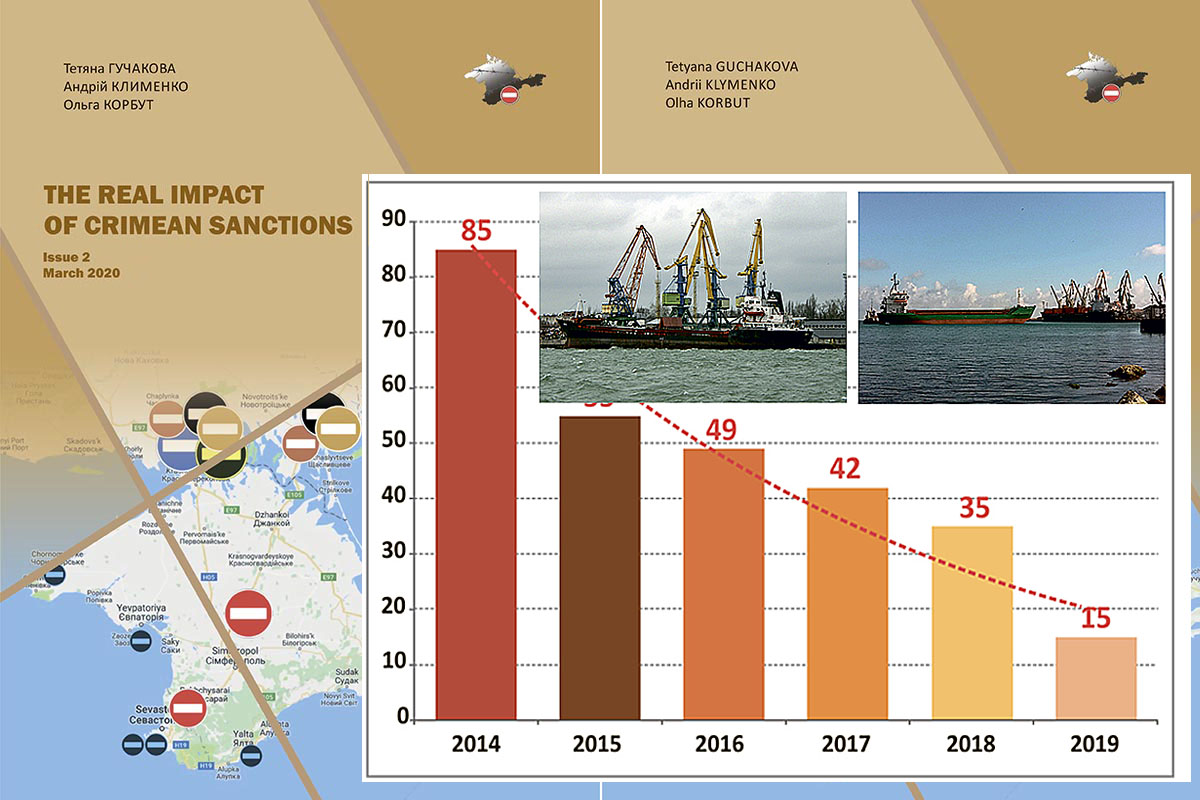 According to the monitoring, which has been conducted by the authors since the ﬁrst days of the occupation of Crimea, in 2014-2019, signiﬁcant changes took place in sea cargo links with ports of the Crimean peninsula as a result of international sanctions.

Over the 6 years of the occupation, the Monitoring Group of the Black Sea Institute of Strategic Studies and the www.blackseanews.net editorial team has "blacklisted" 143 vessels belonging to shipowners from 15 countries (except the RF) for entering the closed ports of the occupied Crimean peninsula.

The statistics for calls of foreign vessels, except the RF's ones, at the ports of the Crimean peninsula for 2019 are based on the monitoring data of the two independent groups, the www.blackseanews.net editorial team and the SeaKrime Group of the Myrotvorets Center (myrotvorets.news/category/ seakrime). The authors express their gratitude and appreciation to the colleagues for the opportunity to verify the data and to be sure of the fact that the sanctions were indeed violated. 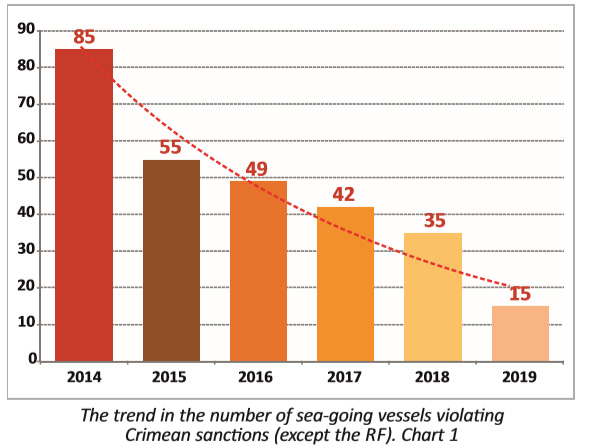 While in 2014, the ﬁrst year of the occupation of Crimea and the year of the imposition of sanctions, 85 vessels violated them, later the number of violators declined annually, and in 2019, there were only 15 such vessels, i.e. their number had decreased almost sixfold (See Table 1, Chart 1).

In 2019, only 15 foreign vessels (except the RF's ones) entered Crimean ports in violation of sanctions; in 2014, the ﬁrst year of the occupation, there were 85 such vessels... The maritime traﬃc has come to an almost complete halt. 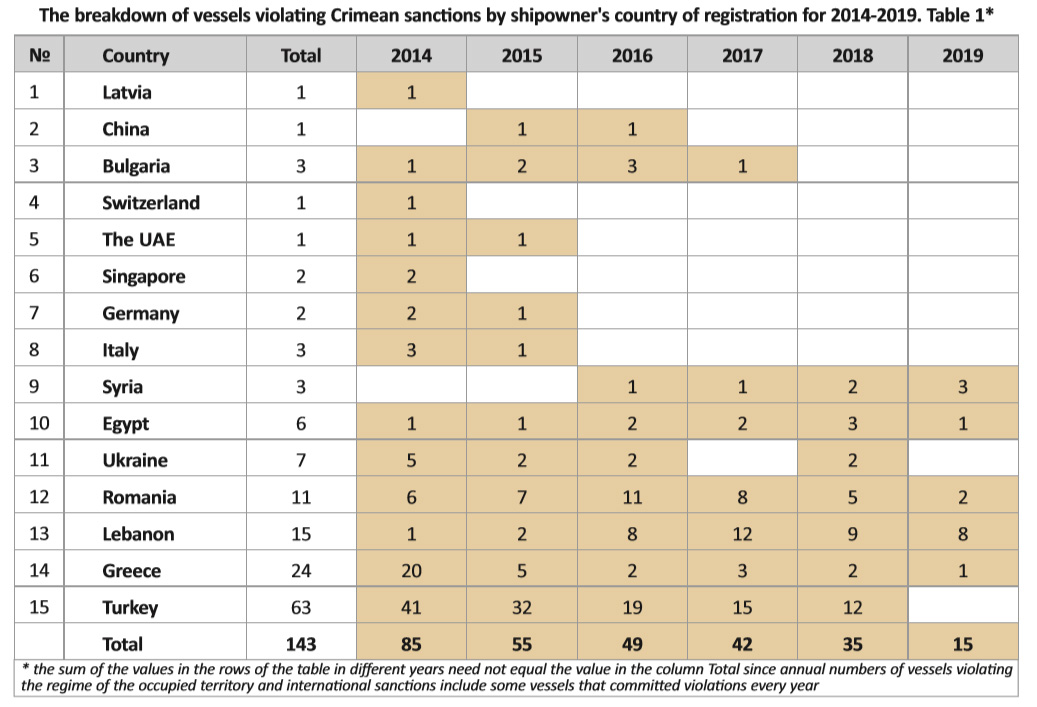 This is the eﬀect of the sanctions regime, the constant monitoring of its violations, and the reluctance of shipowners to be on public sanctions lists. This process has been signiﬁcantly inﬂuenced by the Ukrainian law enforcement agencies' willingness to arrest ships and prosecute shipowners, as demonstrated by some examples, as well as by the ongoing work of the Ukrainian diplomacy, civil society, and media in the respective shipowners' countries of registration.

The dramatic decrease in the number of violators has been caused primarily by the fact that vessels belonging to shipowners from Greece stopped entering Crimean ports in 2015, from Turkey and Romania – in 2019. In previous years, the vessels belonging to shipowners from these countries accounted for the largest number of violators.

In 2019, the vast majority of remaining violators (12 out of 15) were vessels belonging to shipowners from the Middle East countries – Lebanon, Syria and Egypt.

The breakdown of vessels violating sanctions by ﬂag state is given in Table 2. 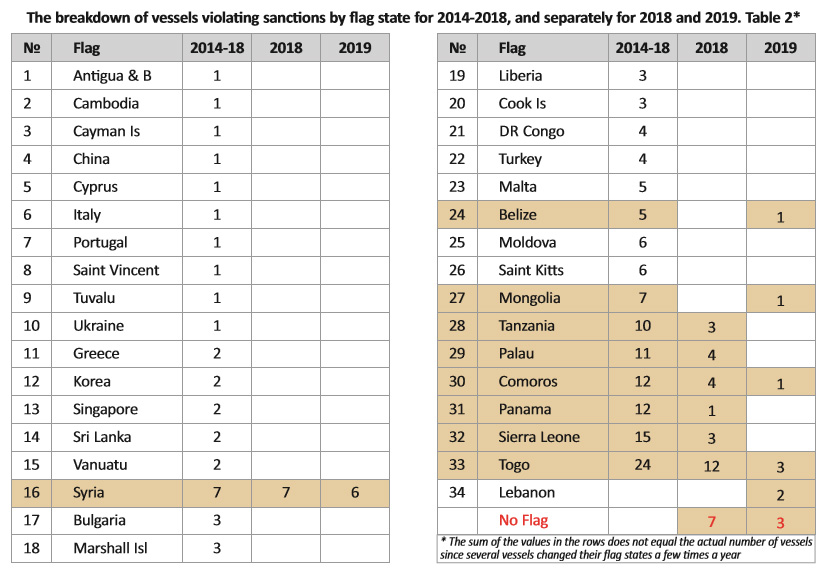 For reference. A shipowner's country of registration and a ship's ﬂag state are not always the same thing.

For example, most vessels violating sanctions that belong to shipowners from Greece, Turkey, and Romania, are registered under "ﬂags of convenience" – mainly those of African countries or exotic islands, where registration requirements for the technical condition of vessels are less stringent and the cost of the procedure is lower.

As early as the ﬁrst years of the occupation, the EU and NATO member states' ﬂags disappeared from the ports of Crimea. They were last seen on 18 March 2017 in Kerch on the mast of the Bulgarian gas tanker BRIZ (IMO: 8899720), which was transporting liqueﬁed gas to Bulgaria.

Other EU and NATO member states have escaped this precarious fate. Of course, this is not always the case with the ownership of vessels violating sanctions.

Moreover, the ﬂags respected in the maritime world – those of Panama, Singapore, Liberia – have completely or almost completely disappeared from Crimean ports. The decrease in the number of vessels violating Crimean sanctions in 2017-2019 was caused to a large extent by the activity of the Permanent Mission of Ukraine to the International Maritime Organization (IMO), which operates within the Embassy of Ukraine in the United Kingdom.

Based on the up-to-date information from the Ukrainian monitoring groups, the Mission of Ukraine to the IMO provided the maritime registration authorities of the respective countries with regular information on violations of Crimean sanctions by vessels registered under the ﬂags of these countries (see Table 2). 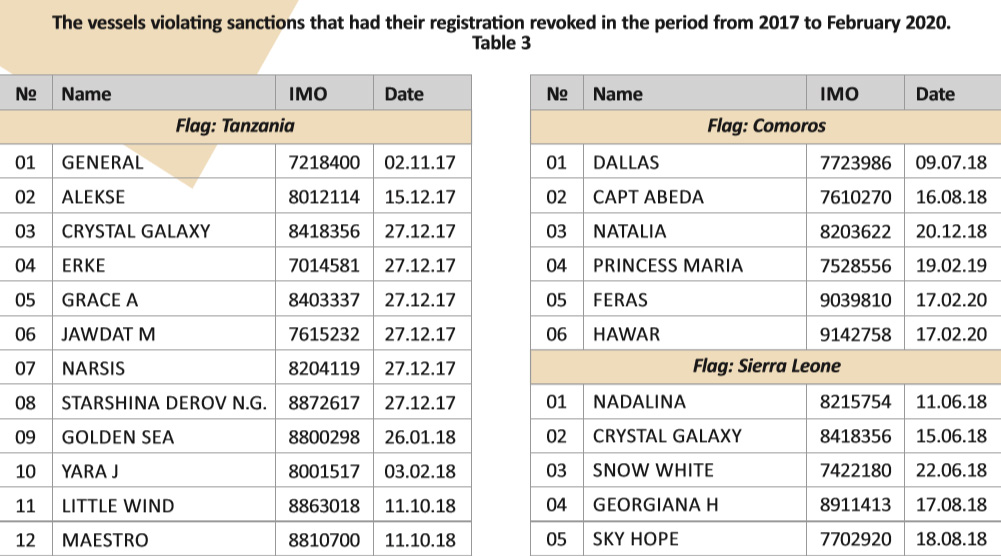 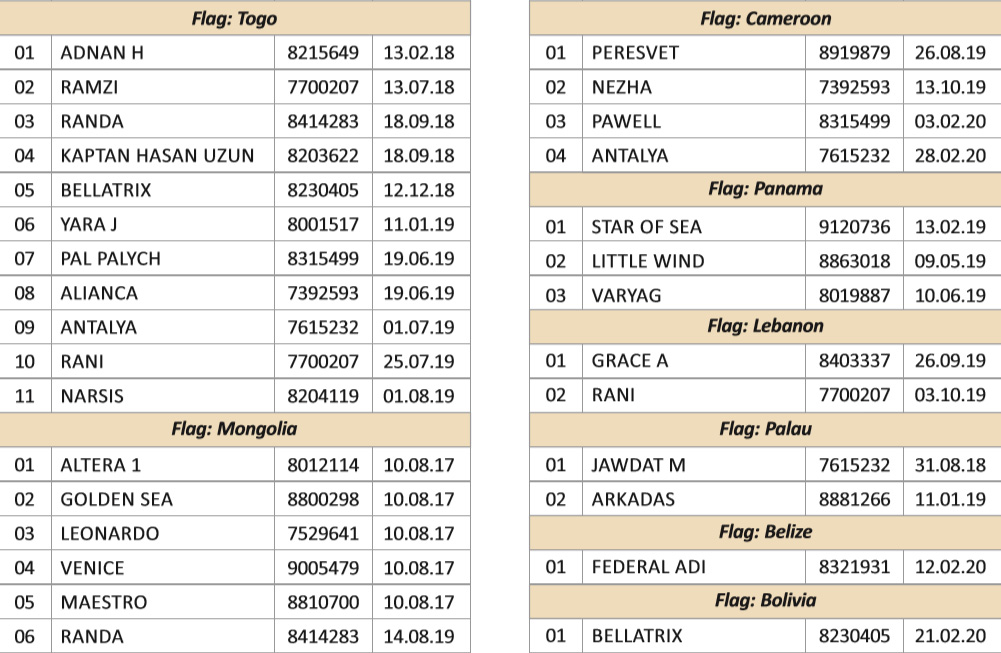 These decisions were taken in 11 countries and concerned 35 vessels violating sanctions: 20 such vessels had their registration revoked once; 13 vessels – twice; 1 vessel – three times, and 1 vessel – four times.

Of course, as the foreign merchant ﬂeet is leaving the ports of the occupied peninsula, it can only be replaced with ships sailing under the ﬂag of the RF. However, this ﬂeet has become unnecessary even for transportaon from the RF since the bridge across the Kerch Strait can be used for freight traﬃc.

The impossibility of legal maritime export and import due to sanctions has rendered the whole port industry of occupied Crimea unnecessary for the economy. 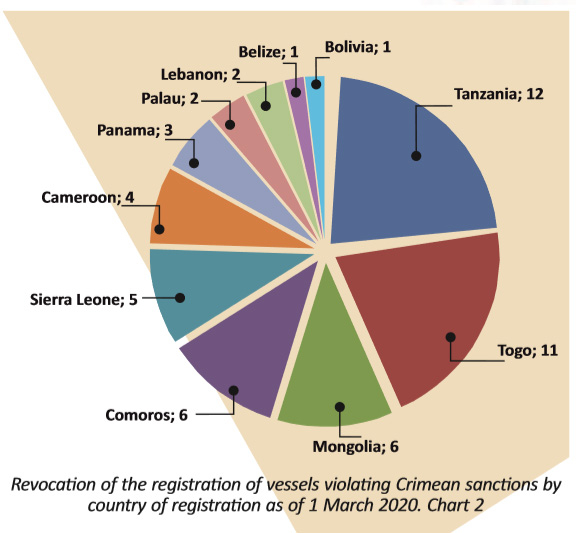