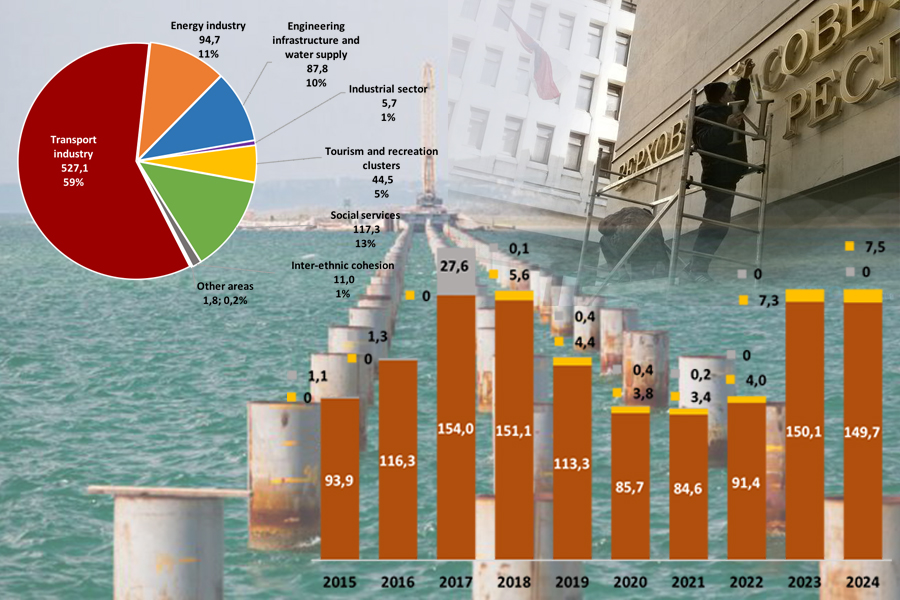 Before the occupation, Crimea and the city of Sevastopol had an extensive network of branches of commercial banks. The total of 67 banking institutions registered in mainland Ukraine had their branches on the peninsula as well as 2 Crimean banks, the Chornomorskyi Bank Rozvytku i Rekonstruktsii and the Sevastopolskyi Morskyi Bank.

The occupying state planned to use Ukrainian financial institutions to mitigate its problems of the “transition period”. However, none of the Ukrainian banks with independent branches in Crimea consented to continue working in the occupied territory under the Russian legislation, so Russian banks tried to fill the void.

During the occupation, at different times, 34 Russian banks started operations in Crimea. In addition, 2 local banks began operations under the Russian jurisdiction bringing the total to 36 (Chart 1).

As of today, 28 banks have had their licences revoked. Out of these, 5 banks have already been liquidated, 23 are currently in bankruptcy proceedings.

2 Russian banks that left Crimea after a brief attempt at work are still operating in Russia.

As of 1 September 2020, only 6 Russian banks remained on the peninsula. All of them are now under international sanctions.

The banks that are currently operating in Crimea are presented in Table 1.

The total net assets of the banks currently operating in Crimea are about USD 19.5 billion. However, 14.8 billion of this amount is the assets of the Aktsionernyy Bank Rossiya (Chart 2).

It is the bank headquartered in St. Petersburg, placed between 10th and 20th in the rankings of Russian banks, and specialised, according to Russian financial analysts, "mainly in providing services to large corporate clients, including enterprises and organizations that are part of the largest Russian strategic companies".

Sanctions prevent it from being an influential financial institution in the international market. Since the development of financial services in Crimea is not appealing to the bank, it mainly looks after the financial interests of its beneficiaries, Yuri Kovalchuk, Gennady Tymchenko, Oleksiy Mordashov, Serhiy Roldugin, and others who have already acquired a large amount of seized Ukrainian property on the occupied peninsula.

Another Russian bank (there are currently only two banks with "non-Crimean residence" in Crimea) does not deserve much attention due to its small size and scale.

As a result of sanctions, all the large Russian banks that used to operate in Crimea before the occupation, namely Sberbank, Alfa-Bank, and VTB, have since stopped operations there and do not intend to resume them.

Of the four "Crimean" banks, RNСB is the largest by asset size and the number of branches. It serves as the "main bank" of Crimea, provides settlement and cash services to a large number of legal entities, and is the only bank that processes payments of individuals.

Incidentally, in the near future, we can expect a further reduction in the number of banks in Crimea. According to Russian financial analysts, the Sevastopolskiy Morskoy Bank, which has been managed by the interim administration since January 2020, is planned to be merged with RNСB. In April 2020, by order of the Russian Central Bank, the authorised capital of the Sevastopolskiy Morskoy Bank was reduced to 1 (one) rouble.

According to Rosstat, during the years of the occupation, investment in fixed capital in Crimea and Sevastopol has totalled $8.6 billion and $1.9 billion respectively. Of this investment, $6.03 billion (70.2%) in Crimea and $1.34 billion (71.6%) in Sevastopol were funded from the state budget (see Chart 3).

This was mainly the investment in the facilities under the so-called Federal Target Programme "The Socio-Economic Development of the Republic of Crimea and Sevastopol until 2020" (the FTP).

The correlation between the level of financing capital investment under the Federal Target Programme and the amount of investment according to official statistics is shown in Chart 4.

In addition to 70% of budget investment in fixed capital, in Figures 3 and 4 we can see investment "from other sources".

The Russian Federal Target Programme "The Socio-Economic Development of the Republic of Crimea and the City of Sevastopol until 2020" was adopted in August 2014, adjusted several times, and finally extended until 2024.

Capital investment under the programme amounts to 1121.9 billion roubles, the remaining 135.4 billion roubles have been allocated for “other needs", such as urban planning documentation, the Era-Glonass system, the creation of communication channels "for the benefit of the Ministry of Defence of the Russian Federation, federal executive bodies, other bodies and organizations, communications operators to ensure national security and defence and law enforcement".

As for the goals of the Federal Target Programme and the specific projects that have been funded, the main objective of the programme is to remove the infrastructure constraints that have arisen as a result of the occupation of Crimea. They are:

Other areas of funding have big names, however, far less funds have been allocated for them:

It is clear that the priorities have not changed: megaprojects to overcome infrastructure constraints and measures to create telecommunications and industrial infrastructure account for more than 80% of the funds.

The main source of funding for the target programme has been and will remain the federal budget of Russia (see Chart 7). Funds from extrabudgetary sources of the FTP are defined in the programme as "credit, various types of loans, as well as own funds of investor companies.”

Thus, the state of the banking system of Crimea and the real nature of investment in the occupied territory indicates that under international sanctions Crimea by definition cannot become attractive for investors. It has been and will remain a financial burden for the budget of the occupying power.