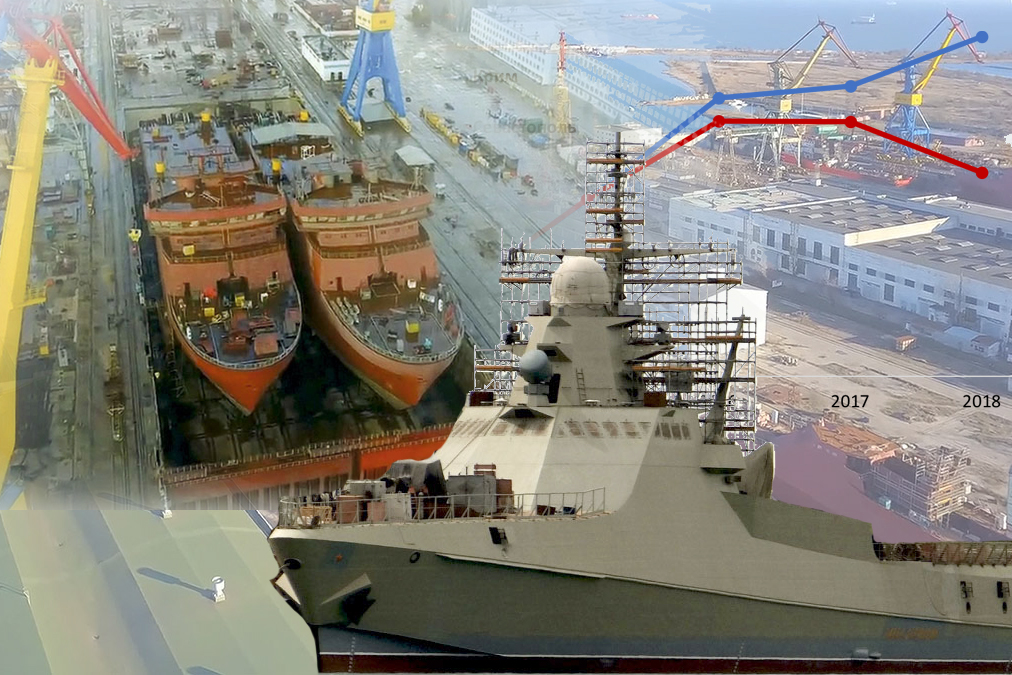 As early as 4 April 2014, at an ad-hoc meeting of the Collegium of the Ministry of Defence of the Russian Federation, Defence Minister Sergei Shoigu announced his intention to provide the industry of the occupied peninsula with state defence orders, emphasizing the importance of «using the manufacturing and technological potential of the Crimean defence industry effectively».

In mid-April 2014, Russia’s Kommersant reported that the Ministry of Defence had already compiled the list of 23 Crimean enterprises of interest to the agency. Citing sources in the ministry, the newspaper wrote that «it has been done in line with the directives of President Vladimir Putin and the process is being supervised by Deputy Defence Minister Yuri Borisov. Currently, the proposals on the effective use of the enterprises are being developed».

According to Borisov himself, they «will start working on ensuring the workload for the enterprises after finalizing all the formal procedures, such as licensing and re-registration».

Almost all Crimean defence companies have already been or are about to be taken over by large Russian corporations, have been leased to Russian enterprises, or at least have so-called «supervisors» in Russia.

The institute of such supervisors was officially introduced in 2016 when the Ministry of Industry and Trade of the Russian Federation ordered that the Crimean enterprises should be assigned supervision. The responsibility of the supervisors has been to share work orders with the Crimean plants they supervise and ensure their modernization.

The official registration of the curatorship by ministerial orders was assigned in August 2017 after another list of the "Crimean" US sanctions. The assets, stolen in Crimea sinсe the occupation have changed a lot: the names of companies have been changed, they have been transferred from one department to another as well as became joint-stock companies etc. Currently, the scheme of changing the ownership due to the "privatization" of assets is getting more popular.

At year-end 2015, Crimea was declared "the leader in terms of the growth rate of industrial production" in Russia with a growth of 165.5% in Sevastopol in 2014 and 127.2% in Crimea. That growth was mainly due to the provision of Crimean enterprises with military orders.

In April 2016, the then Russian President's envoy in the so-called "Crimean Federal District" Oleg Belaventsev said that the military-industrial complex, which included about 30 companies, was a strategic direction for Crimea's industrial policy.

According to representatives of the Crimean "government", the Crimean enterprises are receiving a sufficient number of state orders mainly due to the personal attention of President Putin and "the firm decision to place a large number of orders at the Crimean shipyards".

However, facing the international sanctions and strong competition from Russian defense companies for state defense orders, it is complicated to achieve the desired level of efficiency in use of Russian occupation of Crimean enterprises.
In October 2019, according to the head of occupation authority of Crimea Sergey Aksenov, the level of loading the machine-building and shipbuilding enterprises in Crimea reached the average of 40%.

As a result of the occupation, the aggressor acquired 13 Ukrainian defence enterprises, which had been part of the Ukrainian state-owned Ukroboronprom concern, as "war trophies".

At the beginning of 2014, the Ukroboronprom concern included 13 Crimean enterprises, namely:

Of those 13, ten enterprises continue operations as separate entities.

The Monitoring Group of the Black Sea Institute of Strategic Studies and BlackSeaNews has identified 59 Russian companies that collaborate with the seized Crimean enterprises of Ukroboronprom and a total of 149 companies collaborating with the Crimean plants on military production.

Some of the most striking examples of the use of trophy Crimean enterprises are provided below.

Leningrad Shipyard Pella first became a so-called supervisor and then a leaseholder of Feodosiia Shipyard More owned by the state of Ukraine (the city of Feodosiia, the Autonomous Republic of Crimea). After the occupation of Crimea, the More shipyard was seized, expropriated, and "transferred" into the federal ownership of Russia. On 15 November 2016, the More shipyard was leased to Leningrad Shipyard Pella until the end of 2020.

Even before the lease of the More shipyard, on 10 May 2016, the Pella shipyard started building Shtorm, the first in a series of 3 missile corvettes of the new Project 22800 Karakurt, for the Black Sea Fleet of the Russian Federation as part of the Russian state defence contract. On 17 March 2017, the shipyard began the construction of Okhotsk, the second missile ship in that series, and on 19 December 2017 – Vikhr, the third corvette.

Following the publication of this information in June 2018, there was a threat of U.S. and EU sanctions against the Pella shipyard. Afterwards, events unfolded as follows.

The first of the three "Feodosiia Karakurts", the Kozelsk small-size missile ship, yard number 254 (during laying down it was named Shtorm), was laid down on 10 May 2016, it was scheduled to be commissioned into the Black Sea Fleet in 2019, and was launched on 9 October 2019 in an unfinished condition.

The Okhotsk small-size missile ship, yard number 255 (during laying down it was named Tsiklon), was laid down on 17 March 2017. It was scheduled to be commissioned into the Black Sea Fleet in 2019 and was launched on 29 October 2019.

The Vikhr small-size missile ship, yard number 256 (the name was given during laying down and so far has not been changed), was laid down on 19 December 2017, launched on 13 November 2019.

After that, in order to avoid international sanctions, Leningrad Shipyard Pella decided to suspend the construction of the three missile corvettes of the Karakurt Project immediately, a year before the lease term expired. It launched unfinished hulls of varying degrees of readiness and organised their towing to the Pella shipyard.

Towing of the 2nd and 3rd ships began at the moment it was already clear that they could not be transported to the Leningrad region before the closure of navigation on the inland Russian waterways (usually navigation stops in mid-November).

AO Zelenodolskiy Zavod Imeni A. M. Gorkogo (Zelenodolsk Shipyard Plant, named after A.M. Gorky), based in the Republic of Tatarstan, part of the AO Ak Bars Holding company, is one of the largest ship manufacturers in Russia.

Zelenodolsk Shipyard Plant’s main «success» on the peninsula is its illegal seizure of the property of the Zaliv shipyard in Kerch in August 2014.

It should be pointed out that Zaliv has one of the largest shipbuilding docks in Europe. Being 364 metres long and 60 metres wide, the dock has no equivalents in the RF. Therefore, we anticipate that its use for the needs of the Russian military will continue to grow.

As of 1 October 2020, the programme to construct warships for the Black Sea Fleet of the RF at the Zaliv shipyard as part of the Zelenodolsk Shipyard Plant’s state defence order is as follows.

The construction of the three missile corvettes of Project 22800 Karakurt

The construction of naval cable ships of Project 15310 codenamed Kabel

Cable layers and ice-breaking vessels Volga and Vyatka of Project 15310 were laid down on 6 January 2015; launched on 18 August 2020. They have a displacement of over 10,000 tonnes, a deadweight of 8,000 tonnes, a length of 140 metres, and a width of 19 metres. Their purpose is laying marine communications cables, wiretapping or damaging international submarine cables, including in Arctic waters. Contract deadlines for the completion of construction in 2018 and 2019 were missed.

Their purpose is receiving, storing, transporting, and transferring liquid (diesel fuel, motor oil, water) and dry cargoes (food, equipment, weapons) to ships. The length of one such ship is 145 m, width – 24 m, water draught – 7 m, speed – 16 knots, deadweight – 12,000 tonnes, navigation area – unlimited, cruising endurance – 8000 miles. The ships were laid down on 26 December 2014, the deadlines for construction completion in 2017-2018 were missed due to Western sanctions. The formation of the ships' hulls and superstructures has been completed, the preparation of the hulls for electrical installation work is currently underway.

The construction of amphibious assault ships of Project 23900

On 20 July 2020, for the first time in the history of the Russian Navy, the two helicopter-carrying amphibious assault ships of Project 23900, Ivan Rogov and Mitrofan Moskalenko (yard numbers 01901 and 01902), were laid down at the seized Zaliv shipyard with the participation of the President of the Russian Federation.

The operational characteristics and even the general appearance of these ships are classified. It is known that one such ship will carry on board more than 20 heavy-lift helicopters, as well as ship-based unmanned combat aerial vehicles and reconnaissance UAVs, will have a well dock for landing craft utilities and will be able to carry about 1000 marines and 75 armoured fighting vehicles. Its displacement is up to 30,000 tonnes, length – over 220 m. The cost of one such ship is 40 billion roubles.
The commissioning of the first amphibious assault ship into the Russian Fleet is scheduled for 2025, the second – for 2027.

The related companies in this project will have to cooperate with the two plants that are already under international sanctions, including the U.S. sanctions. The construction of warships of this class will require cooperation with hundreds of plants in Russia.

The construction of other ships:

AO Vertolety Rossii (Russian Helicopters), Moscow, part of Rostec. The company is on the Ukrainian and U.S. sanctions lists.

By the orders of the Ministry of Industry and Trade of the RF, Vertolety Rossii has been officially assigned to Sevastopolske Aviatsiine Pidpryiemstvo (Sevastopol Aircraft Plant) in order to provide the latter with orders. FGUP Syevastopolskoye Aviatsionnoye Pryedpriyatiye is de-facto integrated into the Vertolety Rossii holding.

AO Tekhnodinamika, Moscow, part of Rostec. The company is on the Ukrainian and U.S. sanctions lists. It is a leading Russian developer and manufacturer of aircraft equipment, including landing gear, fuel and flight control systems, and auxiliary power units.

AO 121 Aviatsionnyy Remontnyy Zavod (121 Aircraft Repair Plant) is a leading enterprise in repair and modernization of tactical aviation aircraft and engines. The company is part of PAO Obedinennaya Aviastroiitelnaya Korporatsiya. A separate business unit of 121 Aviatsionnyy Remontnyy Zavod, Service Centre Saki, has been set up on the premises of Yevpatoriiskyi Aviatsiinyi Remontnyi Zavod in Novofedorivka.

However, not all trophy enterprises of Ukroboronprom in Crimea will be used by the Russian military-industrial complex. Some of them, which have equivalents in the Russian Federation, such as Feodosiiskyi Optychnyi Zavod, are likely to be liquidated.

This article has been published with the support of ZMINA
Human Rights Centre. The content of the article is the sole responsibility of the authors.