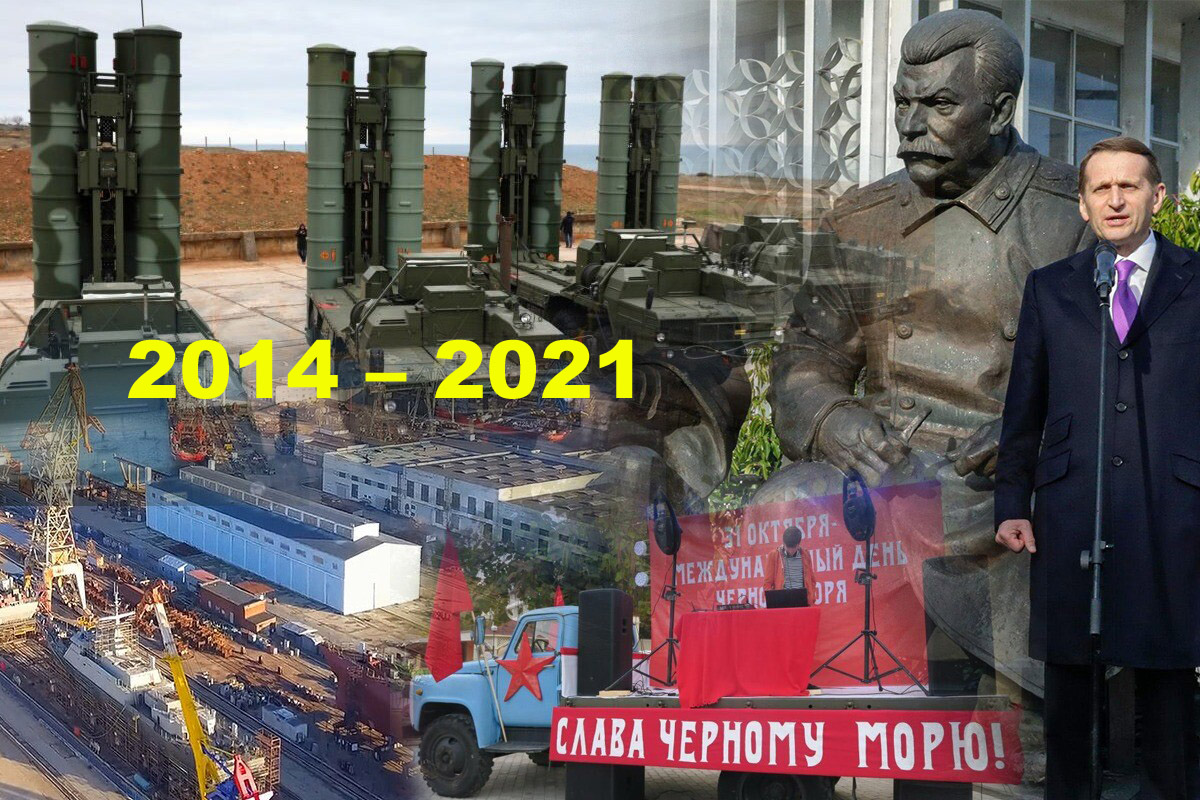 The socio-economic situation in Crimea after the occupation and illegal annexation by the Russian Federation is characterized by a rapid return to the Soviet era, ranging from the sectoral structure of the economy to the standards of accounting and reporting and social services for the population.

Despite the myth of Crimea being the "USSR-wide health resort" that existed in the Soviet Union, the real nature of the economic processes in Crimea in the Soviet era was different.

In terms of employment, land use, state investment, and output volumes, Crimea was:

The Crimean industry was based on the enterprises of military instrument-making in Sevastopol, Yevpatoria, Simferopol, and Feodosia and military shipbuilding and ship repair in Sevastopol, Feodosia, and Kerch.

At the same time, the data related to the defence industry and the military-industrial complex, such as the number of people employed and production volumes, never appeared in public official statistics.

With the end of the Cold War, during perestroika and in the years following the collapse of the USSR, the main Soviet-era industries of the Crimean economy were completely or mostly lost in the course of the political and spontaneous market changes.

The labour resources released from these industries have been absorbed mainly by small business, which in Crimea has never meant classic entrepreneurship that creates the middle class, but rather a means of survival and self-employment. By 2001, the new economic structure of the peninsula had developed, and until 2010, the food and chemical industries were the main drivers of the Crimean economy. The share of agriculture continued to decline, and its place was increasingly taken by trade and services.

A telling marker was that the “Ministry of Crimean Affairs” created on 31 March 2014, two weeks after the illegal annexation, was dissolved as early as 15 July 2015

During 2016, the RF completely abandoned the idea of turning Crimea into a "new showcase for Russia". On 28 July 2016, the status of occupied Crimea and Sevastopol within the Russian Federation was lowered: the "Crimean Federal District", which had been created immediately after the annexation, on 21 March 2014, was eliminated by Putin's decree. The so-called "constituent entities of the Russian Federation", the Republic of Crimea and the city of Sevastopol, were merged into the Southern Federal District of the RF with the administrative centre in Rostov-on-Don.

Among other things, that act established a uniform system for the political and administrative governance and the military command, because, since the beginning of the occupation, all Russian military units in Crimea have been part of the Southern Military District with the headquarters in Rostov-on-Don.

Since 2016, the militarization of Crimea has become not only the main focus of Russia's Crimean policy but also the main driver of the occupied peninsula's economy. As a result, for almost 7 years of the occupation, it is the "military development" of the territory that has been the most striking "success story" of the Russian Federation in Crimea.

That "military development of the territory" includes, first of all, building up a giant military base that equals or exceeds in terms of the number of military personnel the largest U.S. military bases around the world. Reliable transport, energy and water supply infrastructure for military purposes and dual-purpose one is being created.

At present, the economies of Crimea and Sevastopol are undergoing the "reverse" restructuring aimed at the priority restoration of the military-industrial enterprises and facilities preserved from Soviet times.

The main components of that "reverse" restructuring of the Crimean economy are as follows:

It is clear that, as in Soviet times, the official economic statistics do not show figures related to military activity. Therefore, to illustrate the "reverse" restructuring of the Crimean economy, the authors used the available statistics on putting into operation fixed assets by type of economic activity.

The most interesting type of activity in the official RF’s classification has code 84 and the name "Public administration and defence, compulsory social security". The main ingredient of this Russian cocktail of military defence and social security is the activity listed under code 84.22, "Defence activities". 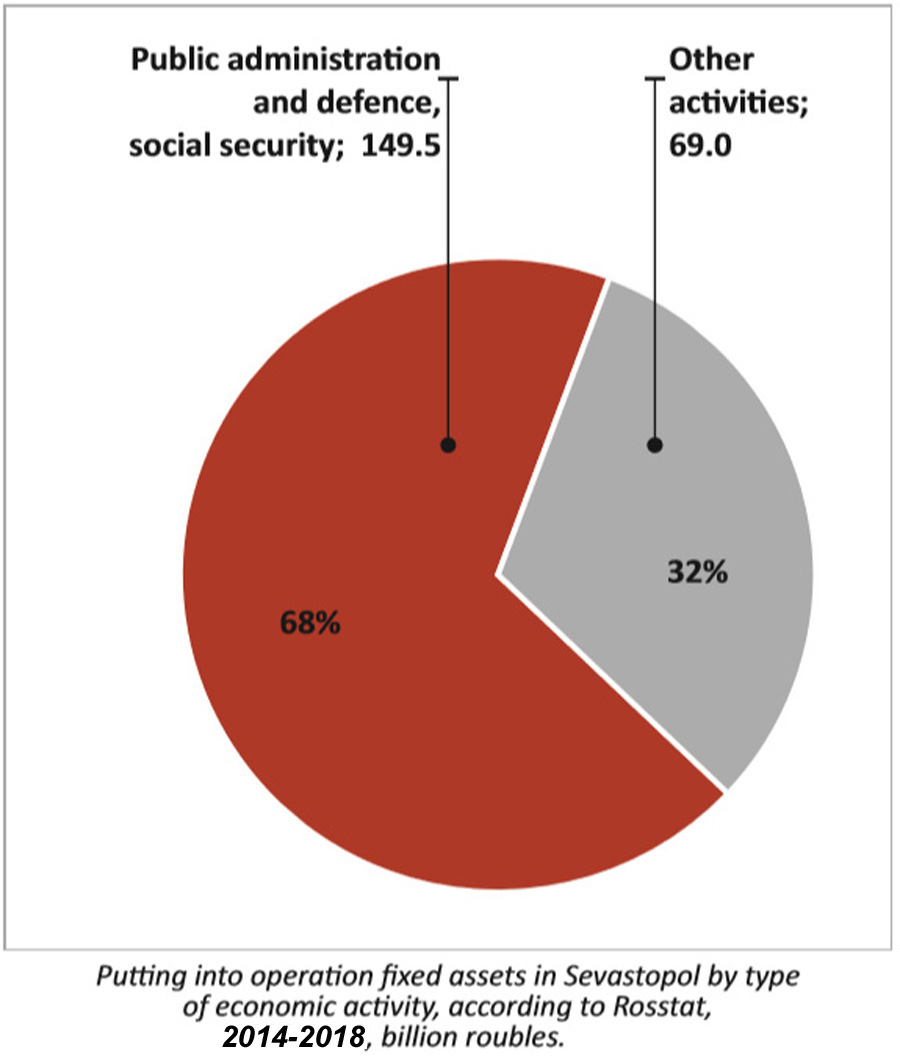 Thus, the red segments of the figures, especially the one shown in Figure 1, which applies exclusively to Sevastopol, the main base of the Black Sea Fleet of the RF, indicates that over the years of the occupation, military facilities and equipment worth up to 150 billion roubles have been put into operation in Sevastopol. These facilities and equipment were assigned to the Black Sea Fleet and naval aviation headquarters located in the city.

The fact that defence activities account for about 70% of fixed assets put into operation in Sevastopol demonstrates which industry has been given the highest priority in the city’s economy.

The so-called "Republic of Crimea" has somewhat different tasks, which is shown in Figure 2. 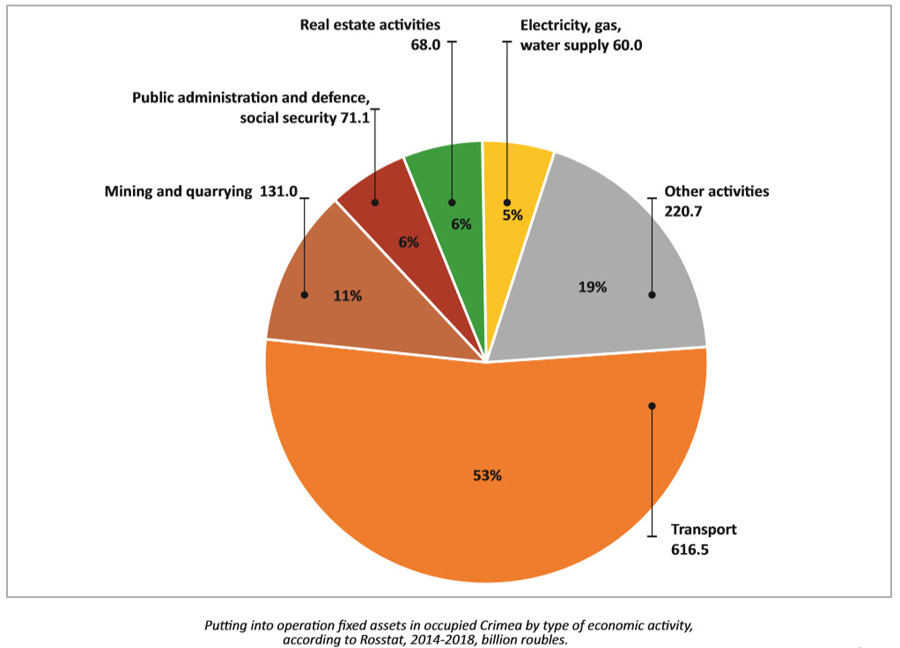 Our analysis of Russian investment activity on the peninsula has demonstrated the following:

the main reason for the existence of the occupied Crimea territory for the RF is to provide transport and critical infrastructure transit from the territory of the RF to the military base in Sevastopol.

As of November 2021, the following main conclusions can be made
about the reverse restructuring of the Crimean economy:

1) The programme of rearmament of the Black Sea Fleet of the Russian Federation with the newest missile ships, which had priority over other Russian fleets, is mostly coming to an end. Russia began to strengthen with such ships its other fleets: the Baltic, North, and Pacific ones.

by 01.01.2022, the number of new missile ships in service will have increased by another 3, i.e. the total number will be 16 with the missile salvo power of 128 missiles;

in 2022, it is planned to put into service 2 more ships, i.e. the total number will be 18 with the missile salvo power of 144 cruise missiles.

2) As of 1 November 2021, we can assume that the formation of a military-industrial base on the Crimean Peninsula to serve the needs of the occupying force of Russian troops is almost completed.

An exception to this main specialization is the construction in Kerch of the two large amphibious assault ships with an air wing (helicopters, UAVs, vertical take-off and landing aircraft).

Areas of specialization such as repair and maintenance of military aircraft, helicopters, air defence missile systems, and coastal cruise missiles will be much narrower in scope but not less important.

3) So, in 2014-2021, the military-strategic significance of the Crimean Peninsula for Russia has increased considerably, and the process continues. It accelerated even more after the completion of the Kerch Bridge due to the radical improvement of the logistics.

4) Summarising the statistics, calculations, and estimates outlined, we can conclude that during the years of the occupation, the population of the peninsula, including Sevastopol, has increased by at least 700 thousand – 1 million people due to external migration from Russia – «Migration weapons»: the replacement of the Crimean population with Russian.

Thus, the de facto population of the Crimean Peninsula is at least 3 million people compared with 2,350,504 people before the occupation.