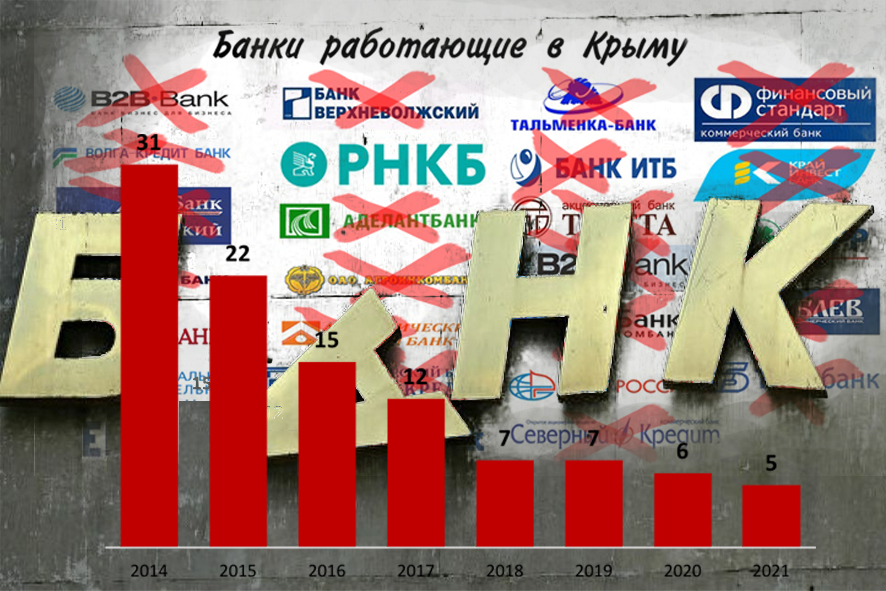 What Was Going On in the Banking Sector

Before the occupation, Crimea and the city of Sevastopol had an extensive network of branches of commercial banks. The total of 67 banking institutions registered in mainland Ukraine had their branches on the peninsula as well as 2 Crimean banks, the Chornomorskyi Bank Rozvytku i Rekonstruktsii and the Sevastopolskyi Morskyi Bank.

During the occupation, at different times, 34 Russian banks started operations in Crimea. In addition, the 2 local banks began operations under the Russian jurisdiction bringing the total to 36 (See Figures 1 and 2).

As of today, 29 banks have had their licences revoked. Out of these 29, 6 banks have already been liquidated and 23 are currently in bankruptcy proceedings.

2 Russian banks that left Crimea after a brief attempt at work still operate in Russia.

As of 1 October 2021, 6 Russian banks operated on the peninsula.

However, as early as 4 November 2021, there were only 5 of them left. The Sevastopolskyi Morskyi Bank was officially liquidated on 4 November 2021, and its remaining parts were taken over by the Russian National Commercial Bank (RNCB) after the "reorganization."

All of these 5 banks are now under international sanctions.

The banks that currently operate in Crimea are presented in Table 1.

The total net assets of the banks currently operating in Crimea are USD 20 billion. However, 14.7 billion of this amount is the assets of the Aktsionernyy Bank Rossiya (Rossiya Bank; See Figure 3).

This bank is headquartered in St. Petersburg and is 16th in the financial rankings of Russian banks. According to Russian financial analysts, the Rossiya Bank specialises "mainly in providing services to large corporate clients, including enterprises and organizations that are part of the largest Russian strategic companies."

Not only the bank itself but also some of its beneficiaries are under international sanctions. Since 2019, information about the bank's beneficiaries has no longer been disclosed, but the Rossiya Bank is known to be the bank of "Putin's friends," namely Yuri Kovalchuk, Gennady Tymchenko, Oleksiy Mordashov, Serhiy Roldugin, and other people, who have already acquired a large amount of seized Ukrainian property on the occupied peninsula.

An interesting detail: Putin's friend Nikolai Shamalov, who in 2018 owned a 9.6 percent stake in the Rossiya Bank, ceased to be a shareholder in 2019. According to investigators, this is due to the fact that Shamalov's son Kirill has divorced Putin's daughter Yekaterina Tikhonova.

Another Russian bank (there are currently only two banks with "non-Crimean residence" in Crimea) does not deserve much attention due to its small size and scale.

Of the three "Crimean" banks, the RNСB is the largest by asset size and the number of branches. It serves as the "key bank" of Crimea, provides cash settlement services to a large number of legal entities, and is the main bank that processes payments of individuals.

How Russian Banks Are Trying to Circumvent Sanctions

After 7 years of the occupation, the situation with the official banking sector in Crimea can be considered stable: it is unlikely that other Russian banks will try a risky experiment of entering Crimea.

The main market for banking services appears to be divided among the five existing banks. However, they are not able to satisfy all the demand for financial services. Moreover, there is a great temptation for other banks to work in this market, using "grey" schemes.

The main mechanisms for circumventing sanctions in the banking sector are as follows.

AO National Payment Card System was established by the Central Bank of the Russian Federation in July 2014 after U.S. sanctions were imposed on a number of Russian banks, and the international payment systems Visa and MasterCard stopped servicing cards issued by these banks.

Sberbank of Russia, despite regular public statements saying that it has no intention of operating in Crimea, began to offer mortgages to purchase real estate on the occupied territory.

"There is no such scheme that would allow us to operate in Crimea without falling under the whole pool of sanctions; I do not know such a scheme. If there were such schemes, we would definitely be there." Herman Gref, Chairman of the Board of Sberbank, October 2017.

The scheme has now been found.

The first mortgage agreements on Crimean real estate with the participation of Sberbank were recorded in 2019, but now this activity has become widespread.

To become a happy owner of the Crimean mortgage from Sberbank, you need:

The company was registered in Moscow in July 2015 and is not on sanctions lists yet.

At the beginning of November 2021, the site had 9,249 advertisements for the sale of real estate in the "Republic of Crimea" and 5,097 – in Sevastopol.

One can apply for a mortgage from Sberbank on the website, without visiting the bank, and begin the process of taking out a mortgage.

Thus, Sberbank provides grounds for strengthening the international sanctions regime against it.

Sberbank is currently on the U.S. Sectoral Sanctions Identifications (SSI) List, which does not involve blocking assets.

Incidentally, the Ukrainian subsidiary of Sberbank, despite repeated statements about its intention to leave the Ukrainian market, not only continues its operations but is also going through rebranding and choosing a new name that is not associated with Sberbank and Russia.

On 27 September 2021, Sberbank of Russia decided to change the name of its subsidiary AO Sberbank. Now it should be called "International Reserve Bank" joint-stock company ("IR Bank" JSC).

According to this decision, the owner has also authorized the bank's board to make decisions on the procedure and conditions for the use of new trademarks.

As reported with reference to the materials of the Patent Office of Ukraine, as early as 2018-2019, Sberbank submitted to Ukrpatent applications for registration of the names "International Reserve Bank" (IRB) in Ukrainian, Russian, and English, as well as related trademarks.

Thus, the state of the banking system of Crimea indicates that under international sanctions Crimea by definition cannot become attractive for investors. At the same time, Russia's activity on the occupied peninsula requires that sanctions policy and monitoring tools should be improved.

This article has been published with the support of ZMINA Human Rights Centre.
The content of the article is the sole responsibility of the authors.