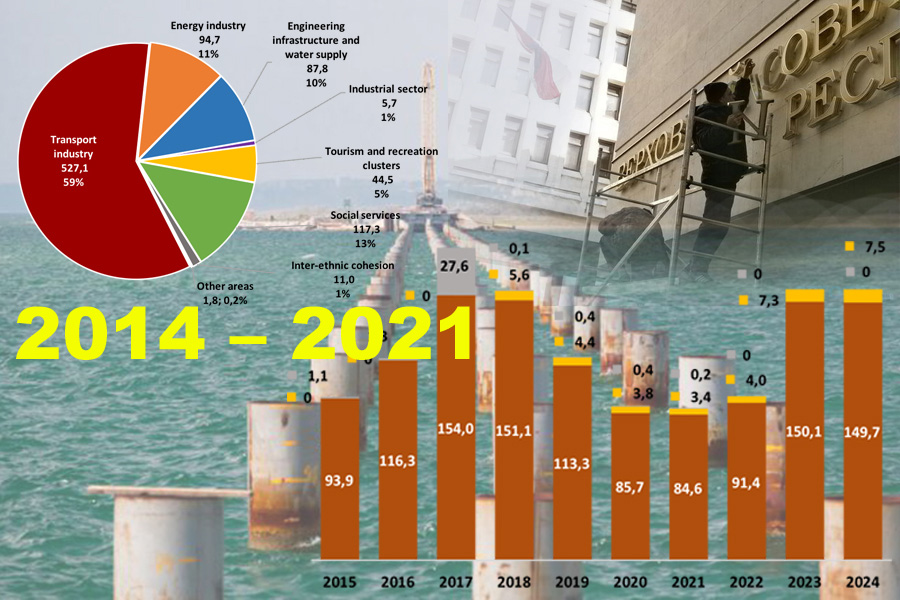 According to Rosstat, during the years of the occupation, investment in fixed capital in Crimea and Sevastopol has totalled $11.0 billion and $2.2 billion respectively. Of this investment, $7.5 billion (68%) in Crimea and $1.6 billion (73%) in Sevastopol were funded from the state budget (see Chart 1).

This was mainly the investment in the facilities under the so-called Federal Target Programme "The Socio-Economic Development of the Republic of Crimea and Sevastopol until 2025" (the FTP).

The correlation between the level of financing capital investment under the Federal Target Programme and the amount of investment according to official statistics is shown in Chart 2.

In addition to 70% of budget investment in fixed capital, in Figures 1 and 2 we can see investment "from other sources".

The Russian Federal Target Programme "The Socio-Economic Development of the Republic of Crimea and the City of Sevastopol until 2020" was adopted in August 2014, adjusted several times, and finally extended until 2025.

Capital investment under the programme amounts to 1240.9 billion roubles, the remaining 132.7 billion roubles have been allocated for “other needs", such as urban planning documentation, the Era-Glonass system, the creation of communication channels "for the benefit of the Ministry of Defence of the Russian Federation, federal executive bodies, other bodies and organizations, communications operators to ensure national security and defence and law enforcement".

As for the goals of the Federal Target Programme and the specific projects that have been funded, the main objective of the programme is to remove the infrastructure constraints that have arisen as a result of the occupation of Crimea. They are:

the removal of transport infrastructure constraints: the construction of the bridge across the Kerch Strait, the reconstruction of Simferopol airport, the construction of roads to increase transport accessibility of the Crimean Peninsula, and reformatting the existing transport corridors for passenger and freight traffic with the focus on Russia, the arrangement of checkpoints (about 63% of the funds);

Other areas of funding have big names, however, far less funds have been allocated for them:

It is clear that the priorities have not changed: megaprojects to overcome infrastructure constraints and measures to create telecommunications and industrial infrastructure account for more than 80% of the funds.

The main source of funding for the target programme has been and will remain the federal budget of Russia (see Chart 5). Funds from extrabudgetary sources of the FTP are defined in the programme as "credit, various types of loans, as well as own funds of investor companies.”

Thus, the real nature of investment in the occupied territory indicates that under international sanctions Crimea by definition cannot become attractive for investors. It has been and will remain a financial burden for the budget of the occupying power.