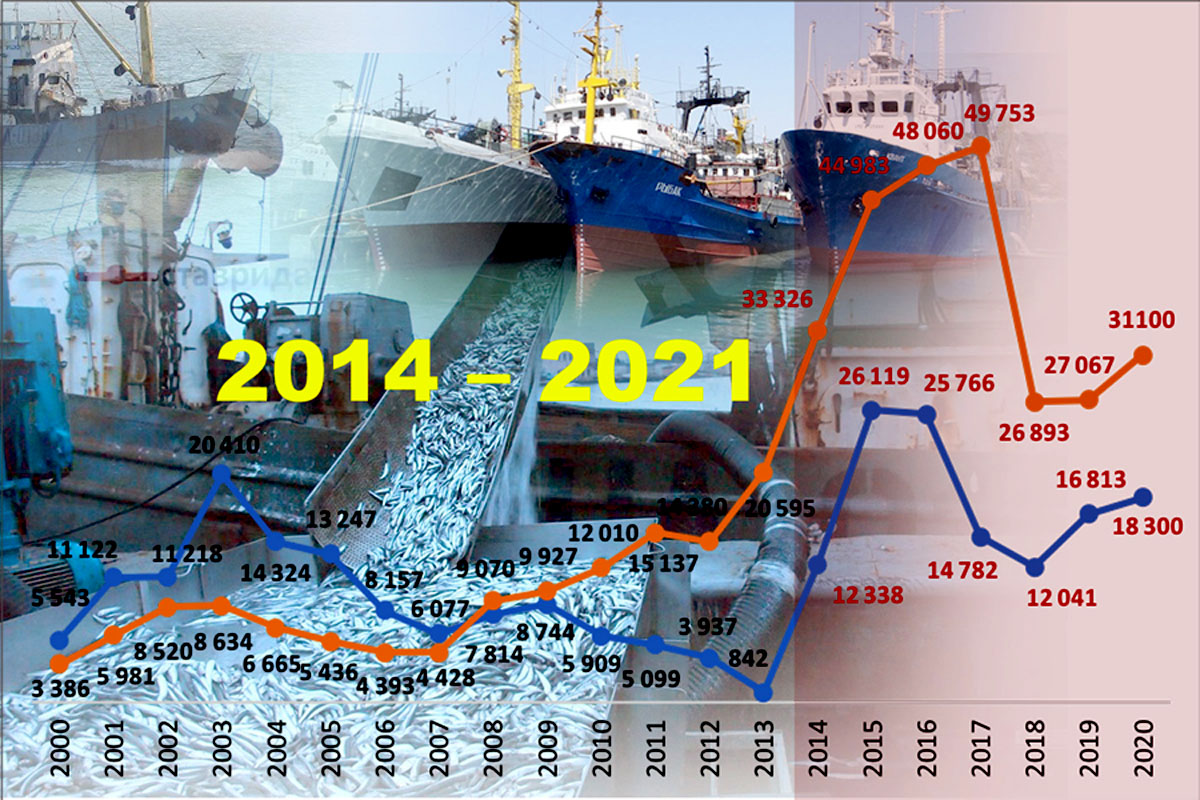 Prior to the occupation of Crimea, Russia harvested about 30 thousand tonnes of biological resources in the Black Sea and the Sea of Azov. That was the combined landings volume of the enterprises in Krasnodar Krai, Rostov Oblast, Stavropol Krai, Volgograd Oblast, and the Republic of Adygea.

From 2007 to 2013, the volume of landings remained roughly stable. For several months of 2014, the Crimean fisheries were left without licences and did not go to sea. But even in that first year of the occupation, the total volume of Russia’s landings in the Black Sea and the Sea of Azov grew significantly due to the addition of Crimean landings (see figures).

In recent years, Russia has stopped publishing data on the actual "Crimean landings," but we can easily estimate the scale of the occupiers' acquisitions in this area. Upon comparing Russian landings of certain species of commercial fish only in the Black Sea, we can see that in five years (2015-2019), the landings of the sprat increased 3.9 times compared to those of the last five pre-war years (Figure 2), the landings of the turbot – grew 9.2 times, and of the horse mackerel – rose 20 times (Figure 3).

As reported by the Russian Federal Agency for Fisheries, the number of fishing companies harvesting the Crimean aquatic biological resources has more than tripled since «the accession of the peninsula to Russia». The Azov-Black Sea territorial administration of Rosrybolovstvo explained that trend with the «specifics of the tax and licencing policy».

the multi-fold rise in the number of fishing enterprises operating in the waters and on the quotas of annexed Crimea has occurred only due to the Russian business entities.

Even a cursory review of the list of those who have obtained the fishing permits shows, for example, that the Simferopol-based Krym-Resurs OOO was founded in January 2015 by the Mangust OOO from the Russian city of Kurgan, while the company with the ambitious name Velikiy Krym OOO (The Great Crimea) was founded in July 2015 by two Chechnya residents.

According to the Monitoring Group of the Black Sea Institute of Strategic Studies and the online publication www.blackseanews.net, commercial fishing off the coast of occupied Crimea in the Black Sea and the Sea of Azov is carried out by at least 94 medium-sized industrial vessels.

Moreover, the authors constantly record mass coastal trawling by groups of seiners up to 10 vessels at the same time. These seiners arranged in an echelon formation sail at a distance of several hundred metres from one another. Their predatory fishing practices (demersal trawling with pelagic trawls) adversely affect the Crimean coast from Kerch to Yevpatoria, starting as close as 100-200 metres from the shore.

The Monitoring Group of the Black Sea Institute of Strategic Studies and BlackSeaNews forecasts the following developments in the field of fisheries of the RF in the Azov-Black Sea region.

In the "Crimean sector" of the Black Sea, the occupying power will significantly increase the catch of the Black Sea turbot in the occupied part of the maritime exclusive economic zone of Ukraine – off the west coast of Crimea (the Kalamitska Bay) and in the area from the Crimean Cape Tarkhankut to Zmiinyi Island (see Figure 4).

This "Russian fishing strategy" will rely on the offshore areas of natural gas production on the sea shelf, seized in 2014 and guarded by the Black Sea Fleet and special forces of the RF, which coincide with the main catch areas of the Black Sea turbot.

Due to the significant increase in salinity of the Sea of Azov (caused by reduced runoff of the Don and Kuban rivers) and predatory fishing off the coast of Crimea in recent years, the anchovy will lose its industrial significance. Therefore, Russia's efforts will focus on catching anchovies off the coast of unrecognized Abkhazia.