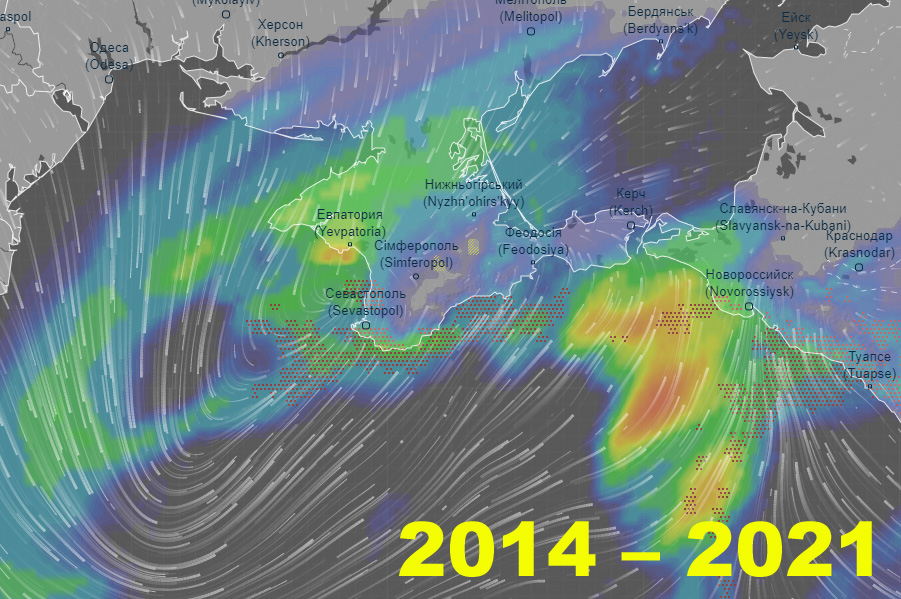 Since the spring of 2020, the information space has been stirred by the situation with water supply to the occupied Crimean Peninsula.

For this reason, we will remind our readers of some basic facts.

1. The fact that most of the Crimean Peninsula is the steppes characterized by long, dry, and very hot summers and snowless winters is not news. The island configuration exacerbates this situation (it can be seen on precipitation maps very clearly). Climate change in the 21st century will continue to make the Crimean climate harsher.

2. It is also well known that since 1971, when the North Crimean Canal reached Kerch, the Dnieper water had provided 85% of water consumption in Crimea. They were well aware of this fact in Russia when they decided to occupy the peninsula in 2014.

3. Cuttng off the water supply to the occupied peninsula in April 2014, or the so-called "water blockade", is a type of economic sanctions imposed in response to the occupation and illegal annexation not recognized by the whole world. Or, to be more precise, the "water blockade of Crimea" is one of the main elements of Ukraine's economic war against Russia.

The sanctions regime as a whole and the water blockade as one of its most effective components aim to increase the price paid by Russia for its aggressive actions, and in the long run, along with other sanctions, to force Russia to end the occupation.

4. It so happened that the years of the occupation until 2020 in Crimea were marked by an unusually high level of precipitation. But it could not last forever.

There are 22 large reservoirs in Crimea with a total volume of 399.4 million cubic metres. Depending on the recharge source, they are divided into:

According to the Representative Office of the President of Ukraine in the Autonomous Republic of Crimea and the State Agency of Water Resources of Ukraine, in the decade until 2014, the North Crimean Canal annually supplied more than 1 billion cubic metres of the Dnieper water to the Crimean Peninsula, which accounted for up to 85% of total water consumption in the Autonomous Republic of Crimea.

In 2013, 1.134 billion cubic metres of water was supplied to the Autonomous Republic of Crimea via the North Crimean Canal, including for the needs of:

That is, the needs of the agro-industrial and industrial sectors of the Autonomous Republic of Crimea accounted for the largest share of water from the North Crimean Canal.

According to the data of the state records of water use, about 101-105 million cubic metres of water was used annually for drinking and household needs in the Autonomous Republic of Crimea, which is approximately 9 times less than the total local flow and projected groundwater reserves and 4 times less than those in dry years. Before the occupation, when the population of the peninsula was 1,967,200 people, the average per capita consumption of water in Crimea was 53.4 cubic metres per year.

Let us take a look at some unrealistically inflated figures.

According to Russian building codes, the standard water consumption per person in apartment blocks more than 12 floors high with a centralized hot water supply and increased requirements for providing amenities is 400 litres per day (146 cubic metres per year). If we imagine that all the 3 million people, which constitute the peninsula's de facto population, live in flats in high-rise buildings, the standard volume of water consumption is 3 million people x 400 litres x 365 days = 438 million cubic metres. Even such volumes are covered by Crimea's own water resources available in dry years (430 million cubic metres).

That is, the shortage of water for the population of Crimea has been caused not only by an increase in the de facto population during the occupation years by 0.8-1.0 million people and large-scale housing construction for the "new population" but, above all, by a significant increase in water consumption by military units and military plants and clearly insufficient maintenance of water supply networks (in the hope that it will be possible to force Ukraine to reopen the North Crimean Canal).

According to our information, as early as April 2020, the Ministry of Natural Resources and Ecology of the Russian Federation sent an instruction to the so-called "Minister of Ecology and Natural Resources of the Republic of Crimea" to report on the current level of water storage, rates of water withdrawal, and prospects for the replenishment of water resources during the summer of 2020.

Increased attention of the federal centre to the problem of water supply to Crimea was caused by a number of enquiries of the State Duma of the Russian Federation deputies on existing mechanisms to address the problem of water shortage on the peninsula, which led to a sharp decrease in sown area and falling yields in 2019.

According to the report by the leadership of the so-called "Crimean State Committee on Water Management and Land Reclamation", which was prepared in May 2020,

According to Crimean officials, solving the problem of water supply in Crimea relying on local forces is not possible.

They mean that there is no funding, expert opinions, and completed design work for numerous desalination projects and using deep aquifers, as a result of which even the funds allocated for these purposes by the government of the Russian Federation within the Federal Target Programme have not been used.

Local collaborators consider "a solution to the problem in the political sphere, at the level of the leadership of Russia and Ukraine" to be the only possible way to ensure adequate water supply to the population and economy of Crimea.

Based on these data, as early as late May 2020, the authors predicted that in the summer of 2020, the situation would be similar to the one that existed in Crimea until 1971, where running water, except for Yalta and Alushta, would be available for only a few hours a day, and in summer – maybe not every day. No catastrophe – just a 50-year step backwards.

That's exactly what happened. In 2020, water supply schedules were introduced in Crimea, sometimes very strict: 2 hours in the morning and 2 hours in the evening.

Overall, the occupation authorities' underestimation of the urgent annual needs for the maintenance and reconstruction of water supply networks in the climatic conditions of Crimea has led to the situation where the water problem has become one of the most important factors hindering further population replacement, industrial development, tourism, and investment.

In 2021, the situation with the water supply to Crimea has improved due to increased precipitation. However, this has not led to a lasting solution to the problem. Dependence on climatic conditions remains a major risk factor.

At the same time, the Russian government has allocated significant funds for the reconstruction of water supply systems on the peninsula. This decision indirectly confirms that in modern conditions, the main factor that further exacerbates the problem of drinking water in Crimea is the insufficient maintenance of water supply networks.

Russia's decision to finally renovate the water supply networks on the occupied peninsula was also a consequence of the fact that in early 2021, Ukraine, for the first time at the level of state documents, recorded its position on restoring water supply to Crimea through the North Crimean Canal.

On 24 March 2021, the President of Ukraine, by his Decree, put into effect the decision of the National Security and Defence Council of Ukraine of 11 March 2021 On the strategy of de-occupation and reintegration of the temporarily occupied territory of the Autonomous Republic of Crimea and the city of Sevastopol. Paragraph 66 of this document states: "Ukraine ensures the creation of conditions for providing water supply to the Crimean Peninsula after the liberation of the temporarily occupied territory and the restoration of the constitutional order of Ukraine on this territory."

At the same time, the risks of a possible military special operation of the Russian Federation on the territory of the Kherson region, which borders Crimea and where the North Crimean Canal begins, remain.