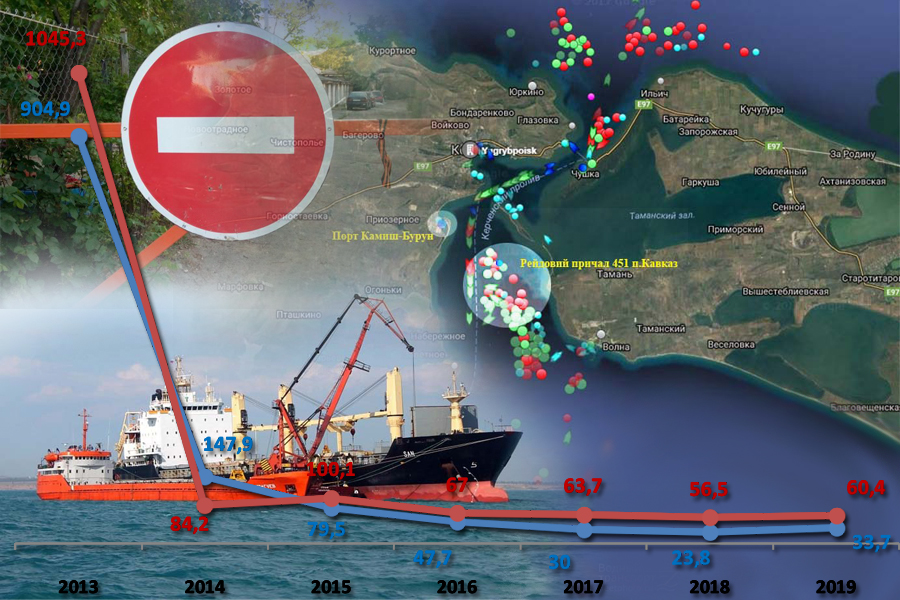 The Crimean occupation government’s statistics have never been a reliable source of information. But even these data reveal some telling results of "international economic activity " (See Figure 1 and Figure 2).

Thus, in 2019, exports from Crimea decreased by 26.9 times in dollar terms compared to 2013, the last pre-war year, and exports from Sevastopol dropped by 15.6 times. The decline in imports over the same period was by 17.3 times in Crimea and by 16.97 times in Sevastopol.

Let us illustrate some indicators of international economic activity with the authors' own investigations.

In 2014-2020, the exports from the ports of occupied Crimea have been as follows:

Imports to Crimean ports have been as follows:

A significant part of grain exports is carried out through transshipment in the Kerch Strait, at Port Kavkaz Anchorage No. 451 in Taman. This allows mixing Crimean grain with grain from the regions of the Russian Federation to disguise the fact that it originates from the occupied territory. This grain is then shipped to countries that adhere to international sanctions.

The main imports to Crimea are ilmenite (the chemical raw material for the production of titanium dioxide at the Crimean Titan plant in Armiansk, northern Crimea) and construction materials. Part of the ilmenite is also imported through transshipment in order to circumvent sanctions (See Table).