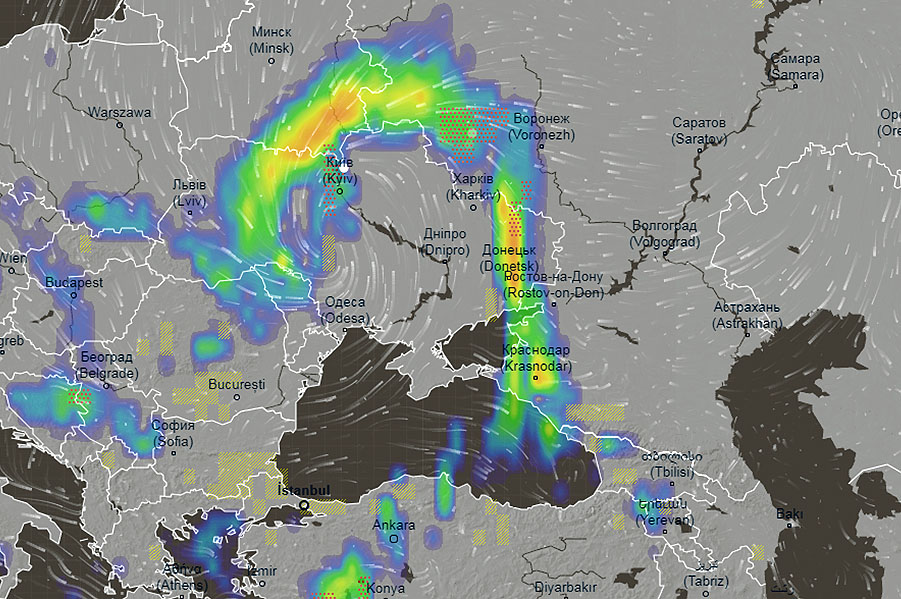 In recent days, the information space has once again been stirred by the situation with water supply to the occupied Crimean peninsula.

For this reason, the Monitoring Group has decided to remind our readers of some basic facts and highlight some of the key points.

1. The fact that most of the Crimean peninsula is a steppe, characterized by long, dry, and very hot summers and snowless winters, is not news.

The island configuration exacerbates this situation (it can be seen on precipitation maps very clearly). Climate change in the 21st century will continue to make the Crimean climate harsher.

2. It is also well known that since 1971, when the North Crimean Canal reached Kerch, the Dnieper water has provided 85% of water consumption in Crimea. They were well aware of this fact in Russia when they decided to occupy the peninsula in 2014.

Our colleagues have described the situation with water supply and reservoirs in occupied Crimea many times in various media. For example, the long read by Ukrainska Pravda What is Happening with Occupied Crimea Without the Dnieper Water. 13 facts is very informative. It eliminates the need to repeat this information. 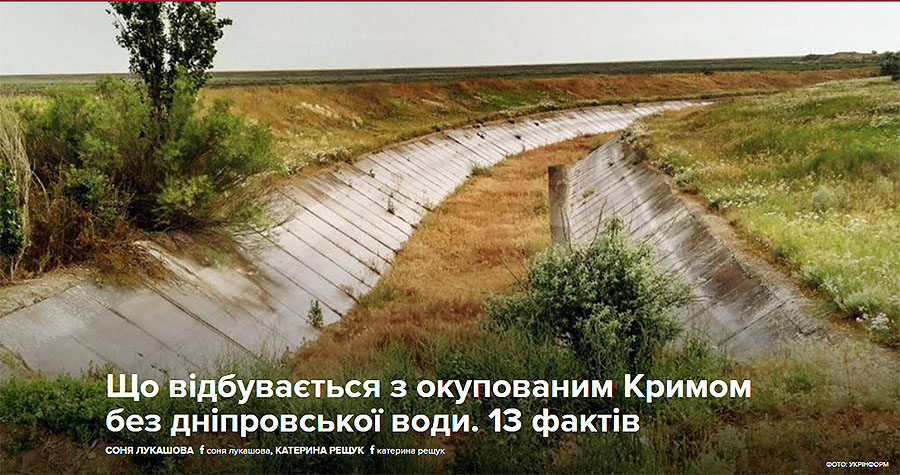 3. Cutting off the water supply to the occupied peninsula since April 2014, the so-called "water blockade", is a type of economic sanctions imposed in response to the occupation and illegal annexation not recognized by the whole world.

Or, to be more precise, the "water blockade of Crimea" is one of the main elements of Ukraine's economic war against Russia.

The sanctions regime as a whole (and the water blockade as one of its most effective components) aims to increase the price paid by Russia for its aggressive actions, and in the long run, along with other sanctions, to force Russia to end the occupation.

4. It so happened that the years of the occupation until 2020 in Crimea were marked by an unusually high level of precipitation. But it could not last forever.

5. Now, about how the Moscow leaders of the occupiers and their puppets in the so-called "Crimean government" actually assess this situation.

But first, to facilitate the perception of the text, let us look at...

There are 23 large reservoirs on the Crimean peninsula with a total volume of 399.4 million cubic metres. Depending on the source of replenishment, they are divided into:

natural flow reservoirs – there are 14 of them in Crimea and 1 (Chornorichenske) in Sevastopol, their volume is 188.85 + (64.2) = 252.7 million cubic metres; they are replenished during the autumn-winter period and spring floods, sometimes – in the summer during showers:

Natural flow reservoirs are replenished during the autumn-winter period and spring floods, sometimes –in the summer during showers. 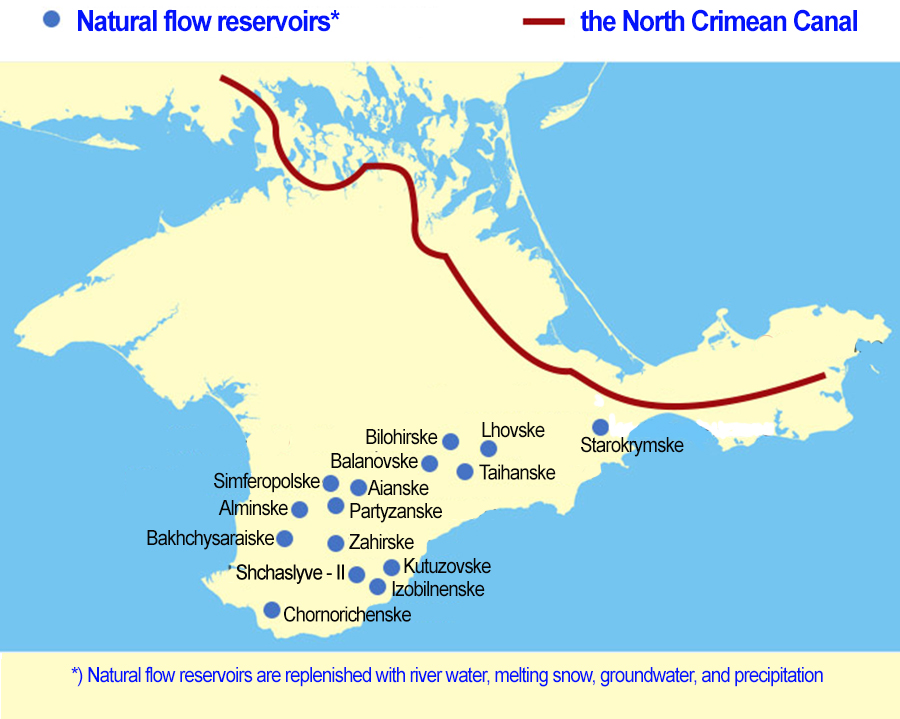 off-stream reservoirs of the North Crimean Canal – there are 8 of them, their volume is 146.35 million cubic meters.

The main characteristics of the reservoirs of the North Crimean Canal

The following map (from the site https://krymania.ru) shows the off-stream reservoirs of the North Crimean Canal and the cities and towns, the water supply of which depends on these reservoirs: 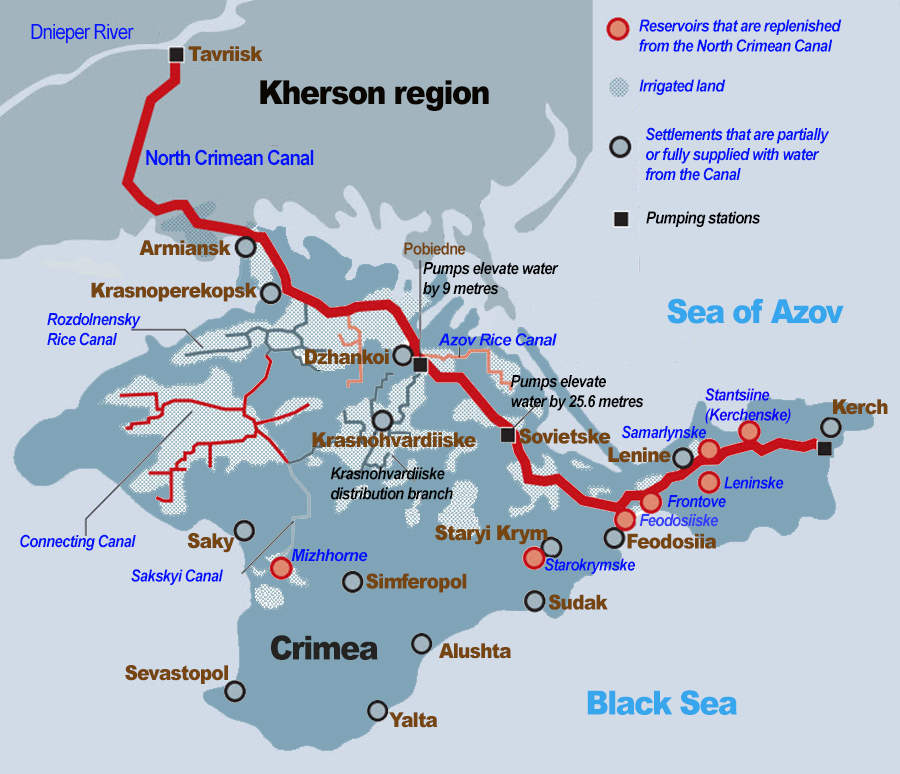 According to the information received from representatives of the so-called "Government of Crimea", in April 2020, the Ministry of Natural Resources and Ecology of the Russian Federation sent an instruction to the so-called "Minister of Ecology and Natural Resources of the Republic of Crimea" Gennady Narayev to report on the current level of water storage, rates of water withdrawal, and prospects for the replenishment of water resources during the summer.

Increased attention of the federal centre to the problem of water supply to Crimea is caused by a number of enquiries of deputies of the State Duma of the Russian Federation on existing mechanisms to address the problem of water shortage on the peninsula, which has led to a sharp decrease in sown area and falling yields in 2019.

According to the report by the leadership of the "Crimean State Committee on Water Management and Land Reclamation" (signed by the "Deputy Chairman of the Committee" Olena Timoshik), which was sent to G. Narayev, ...

"…water storage in natural flow reservoirs has not been replenished since the end of March 2020 due to the prolonged drought.

The Simferopolske reservoir is 20% full, in April only 600 thousand cubic meters of water was received ... The available volume allows for providing for the needs of the capital of Crimea for no more than 4 days.

The Aianske Reservoir, which provides Simferopol and the settlements of the Salhyr valley with water, is filled to 60% of its capacity (due to melting snow in the mountains) and remains the main source of water supply to Simferopol. Current storage will suffice for 2-3 months, the replenishment rate is declining due to the end of the snow-melt season and the absence of precipitation.

The Bilohirske and Taihanske reservoirs, which were previously used to provide water for agriculture in the eastern Crimea, are currently only supplying water for the needs of the population of the north-eastern Crimea, they are not more than 30% full, with the current withdrawal rate, the storage will suffice for 2 months.

The Partyzanske reservoir (provides for the needs of Simferopol, its western suburbs, and rural settlements of the district) is filled only to 30% of its capacity, its replenishment does not exceed 10 per cent of the average annual indicators. The storage will suffice for 3-4 weeks.

The situation with water supply looks the least threatening in the reservoirs that provide water for the settlements of Greater Yalta and the city of Alushta. The Zahirske and Shchaslyvenske reservoirs are 60% full, Izobilnenske (Alushta) is 70% full... "

According to Crimean officials, solving the problem of water supply in Crimea relying on local forces is not possible.

They mean that there is no funding, expert opinions, and completed design work for numerous desalination projects, using deep aquifers, etc.

Local collaborators consider "a solution to the problem in the political sphere, at the level of the leadership of Russia and Ukraine" to be the only possible way to ensure adequate water supply to the population and economy of Crimea.

In turn, the Russian government's attention to the problem of water supply in Crimea is caused by the failure of the Federal Target Programme to provide water resources for Crimean agriculture, which was aimed at achieving a gradual increase of sown areas by 20% annually from 2020, and attempts to shift responsibility for this failure from the Minister of Natural Resources and Environment of the RF Dmitry Kobylkin (a creature of the "oil and gas lobby" and a personal friend of Dmitry Medvedev) to local authorities.

That is, in the summer of 2020, the situation is predicted, which the author saw with his own eyes in Crimea until 1971, where running water, except for Yalta and Alushta, will be available for only a few hours a day, and in summer – maybe not every day. No catastrophe – just a 50-year step backwards.

It will be necessary to transport water by railway tank cars on the new bridge across the Kerch Strait and to deliver it by tank trucks to the districts of cities and towns. According to schedule.

What can be said here? It's time to pay the price.