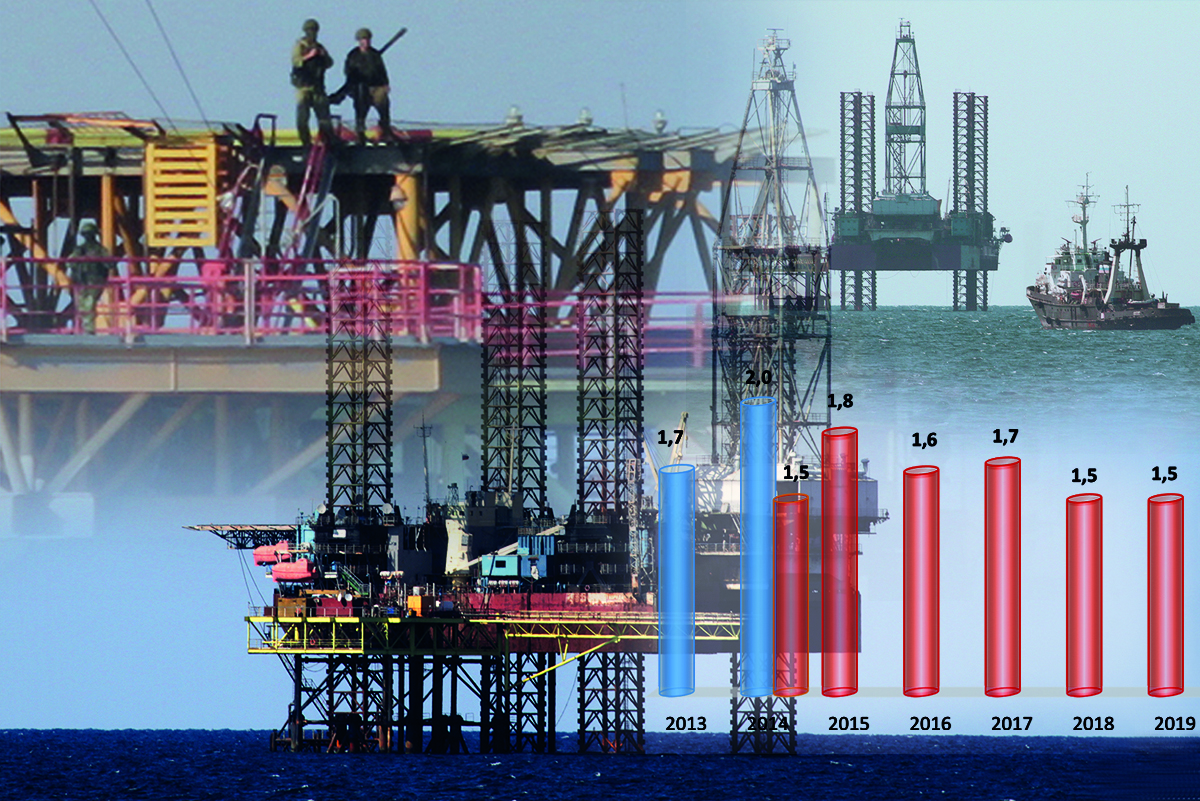 During 2014-2020, in violation of the UN Convention on the Law of the Sea, Russia has illegally extracted hydrocarbons in the waters of the Azov and Black Seas near the occupied Crimea.

Gas production in Crimea is carried out by Chornomornaftohaz DAT, a subsidiary of Naftohaz Ukrainy NAK, which several years before the occupation of the peninsula purchased for its Crimean branch a modern fleet, including two advanced deep-water jackup rigs.

The major driving force for the development in the years before the occupation was the offshore Odesa gas field located off the coast of the Odesa region, 150 km west of Crimea and 130 km south of the city of Odesa.

On 13 March 2014, Chornomornaftohaz, including its jackup rigs at the Odesa field, was seized by the Russian special operations forces. The seizure of the Chornomornaftohaz rigs was carried out by the well-known in Russia “Pskov paratroopers” of the airborne troops, namely the 104th air assault regiment, part of the 76th Guards air assault division. The area of deployment is Pskov oblast of the Russian Federation, military unit 32515.

Starting 14 March 2014, Naftohaz Ukrainy NAK has not been receiving from the DAT Chornomornaftohaz PAT the daily operational information on the production, transportation, and use of natural gas, oil, and gas condensate.

A few days later, on 17 March 2014, Chornomornaftohaz was expropriated by the Crimean collaborators. Its offshore facilities continued to work under the round-the-clock guard by the Russian special operations forces and naval ships of the RF’s Black Sea Fleet.

Ukraine’s decision to disconnect occupied Crimea from its GTS had led to the gas shortage that Russia decided to make up for by increasing the volume of production at the Odesa field. In 2014, the production grew to 2 billion cubic metres and, for the first time, Crimea managed to do without the supply from the mainland.

Given that the peninsula’s Hlibovske underground gas storage facility (UGSF) has an active volume of up to 1 billion cubic metres or about 60% of the annual consumption, the Chornomornaftohaz had a surplus of gas. Having filled the UGSF to the highest level in its history, the company was forced to restrain production. In 2015, it declined to 1.844 billion cubic metres. 57% of that volume, that is, about 1 billion cubic metres was produced at the Odesa field.

It should be pointed out that even though the Odesa field is located outside the territorial waters of Ukraine, it is still in its exclusive economic zone that is not adjacent to the occupied Crimean Peninsula.

The projected reduction in gas production has turned out to be correct: in 2016 Chornomornaftohaz produced 1.644 billion cubic metres of gas that was less than in the last pre-war year of 2013.

Because of that, the occupying power had to sharply accelerate the construction of the gas pipeline from Krasnodar Krai, originally scheduled for completion only in mid-2018.

The pipeline has been built by Stroygazmontazh, a company under the international sanctions. The final cost is not disclosed, however, according to the authors’ sources, due to the force majeure situation, its value has significantly exceeded the estimated 20 billion roubles. The construction of the underwater part accounted for up to 70% of the total cost.

For fear of sanctions, it is not Gazprom that supplies the natural gas to occupied Crimea via the pipeline, but the federal state unitary enterprise (FSUE) Foreign Economic Association Promsyreimport. The gas is purchased at the St. Petersburg International Mercantile Exchange.

Meanwhile, in 2017, Ukraine made significant progress on these issues in international courts. There are two proceedings currently underway.

The first proceedings were brought by the Ministry of Foreign Affairs of Ukraine at the Permanent Court of Arbitration in The Hague, the Netherlands, under the 1982 UN Convention on the Law of the Sea.

Notice of arbitration, lawsuit and its base was sent to Russia on September 14, 2016.The Arbitration Tribunal was formed on 22 December 2016.

On 12 May 2017, the first court hearings took place, resulting in the order as to the procedural deadlines.

On 19 February 2018, Ukraine submitted a memorandum containing a description of Ukraine’s claims against Russia.

The Ministry of Foreign Affairs memorandum states that Russia has violated the sovereign rights of Ukraine in the Black Sea and the Sea of Azov, as well as in the Kerch Strait. Since 2014, the RF has deprived Ukraine of its right to exercise its powers as a maritime nation, has been exploiting Ukraine’s sovereign resources for its own needs and usurped the right of Ukraine to regulate its own marine areas.

It is also noted that Russia has been stealing the energy and fish resources belonging to Ukraine and its people, while also causing physical damage to Ukrainian fishermen, and has been blocking the entry of ships into Ukrainian ports due to the illegal construction of the Kerch Bridge.

On 21 February 2020, the Tribunal concluded that it had no jurisdiction over some of the claims concerning the rights of Ukraine as a coastal state in the waters near Crimea, as it had no jurisdiction to decide the issue of sovereignty over the peninsula. That is, it will not consider the issues of Ukraine's rights in the Black Sea and will only consider those related to the Sea of Azov and the Kerch Strait.

The second proceedings were instituted by Naftohaz Ukrainy NAK together with the six other companies of the group, Chornomornaftohaz, Ukrtranshaz, Ukrhazvydobuvannia, Ukrtransnafta, Haz Ukrainy, Likvo.

The lawsuit was filed in October 2016.

In August 2017, the Permanent Court of Arbitration in The Hague began consideration of Naftohaz's arbitration claim against the Russian Federation regarding compensation for the assets lost as a result of the annexation of the Crimean Peninsula in 2014.

An oral hearing on the issues of jurisdiction and responsibility was held at the Peace Palace in The Hague in May 2018.

In March 2019, the Tribunal recognized its jurisdiction over Naftohaz's arbitration claim against Russia regarding the lost assets.

According to Chornomornaftohaz that was relocated to Kyiv, from the beginning of the occupation to 2020, the Russian occupiers produced more than 11 billion cubic metres of gas on the occupied peninsula and from the offshore fields in the Black Sea and the Sea of Azov.

However, the plans to develop new fields have already been forgotten, although in November of 2016 the occupying “Ministry of Fuel and Energy" of Crimea reported that in 2017 "Chornomornaftogaz" was going to intensify exploration activities on the Black Sea shelf.

Yet, this can also be attributed to technological reasons - the lack of deep-sea equipment at Chornomornaftogaz due to sanctions.

The only thing that can be considered a notable "success" in the Russian development of the Ukrainian shelf is the creation of mini-military bases on the oil platforms. The Russian military has installed radar stations on the seized Ukrainian rigs and platforms. These facilities are constantly guarded by about 130 armed servicemen.