Banks Under Sanctions: The Database of the Banks Requiring Synchronization Between the Ukrainian, US and EU Sanctions Lists

No one doubts that Ukraine urgently needs to do something about its sanctions policy towards the state that has occupied part of the Ukrainian territory and continues the war in various forms.

Sadly, it is not news that Ukrainian sanctions against Russia are even weaker than the sanctions of other states, and that Ukraine must at least synchronize its sanction regime with that of the United States.

We now even have the bill on amending the Law of Ukraine "On Sanctions" in regard to the synchronization of sanctions with the international community. And today, a meeting of the Committee of the Verkhovna Rada of Ukraine on Foreign Affairs «On the Implementation of the Sanctions Policy of Ukraine" is scheduled to take place.

The Monitoring Center for the Maidan of Foreign Affairs, the Institute of Strategic Black Sea Studies and the BlackSeaNews online portal are ready to help the state authorities in finding the information and arguments for the effective work with the sanctions and remind them those actors and connections that can be accidentally "forgotten" by civil servants. .

Our today's publication is about the sanctions policy towards the Russian banking institutions.

Overall, the total of 76 banking institutions are currently on the Ukrainian, US and EU sanctions lists in relation to the Russian aggression in Ukraine.

46 of them are the banks registered in the Russian Federation, while 5 banks are located and operate in Crimea, but are now registered under the legislation of the occupying power. Two institutions are located in the occupied territory of the Donbas — the so-called "Central Republican Bank of the Donetsk People's Republic" and "State Bank of the Luhansk People's Republic". Another 4 institutions are the subsidiaries of Russian banks located on the territory of Ukraine. In addition, the list of the American Office for the Control of Foreign Assets (OFAC) contain 19 foreign branches of Russian banks.

In total, as of the end of September, the US list contains 61 banking institutions, the Ukrainian list — 56 and the EU - 6.

It should be noted that one of the banks of interest to us, the Russian Tempbank, is not in the Ukrainian, but rather, in the so-called "Syrian" OFAC list with the identical sanctions set.

From analyzing the chronology of sanctions, once can see that the US sanction lists that appeared in April 2014 has been continuously added to, the EU list adopted at the beginning of the aggression has not evolved, while Ukraine has been making the sanctions decisions very slowly and not always logically. 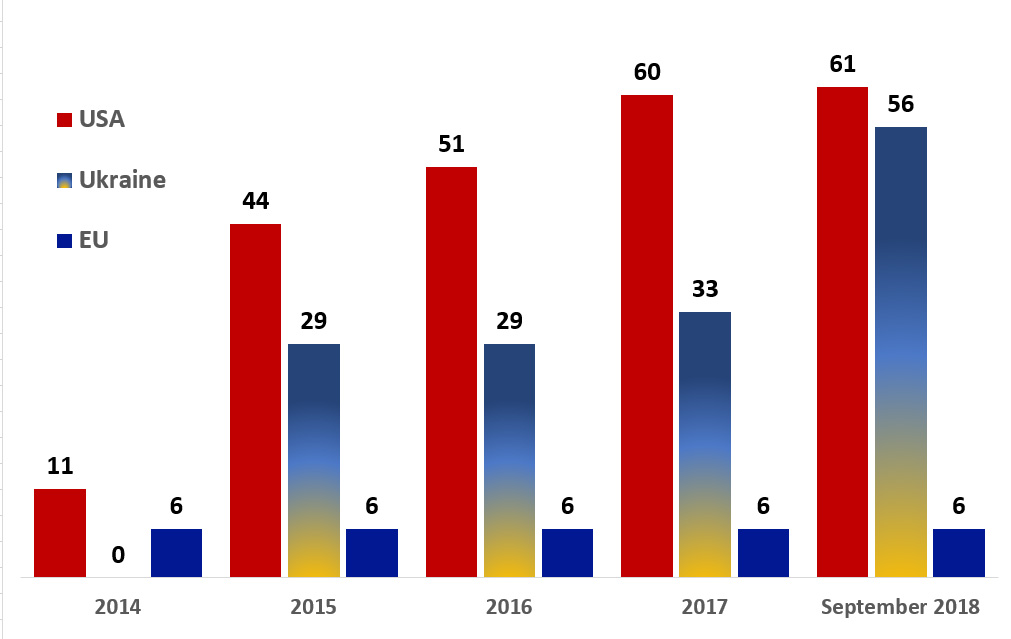 Speaking of the logic of working with the sanction lists:

The EU sanctions lists appeared at the beginning of Russian aggression in Ukraine and later, were simply extended. That was not always easy due to the resistance of businesses and the influence of Russian propaganda on the political life of Europe, but was overall, logical.

The work of the United States Department of the Ministry of Finance on the "Ukrainian sanctions" that began in the spring of 2014, has never stopped. The new perpetrators have been added to the lists annually, often multiple times a year.

And only the Ukraine's sanctions actions is often difficult to explain logically.

For instance, on August 14, 2014, the basic law "On sanctions" was adopted, but the first decision on the sanctions enactment was adopted by the National Security and Defense Council only on September 2, 2015.

At the same time, the Ukrainian subsidiaries of Russian banks, i.e., Sberbank, Vnesheconombank and VTB, appeared on the sanctions list only after the March 2017 mass protests in Kyiv, while the "parent" banks — only in May 2018. 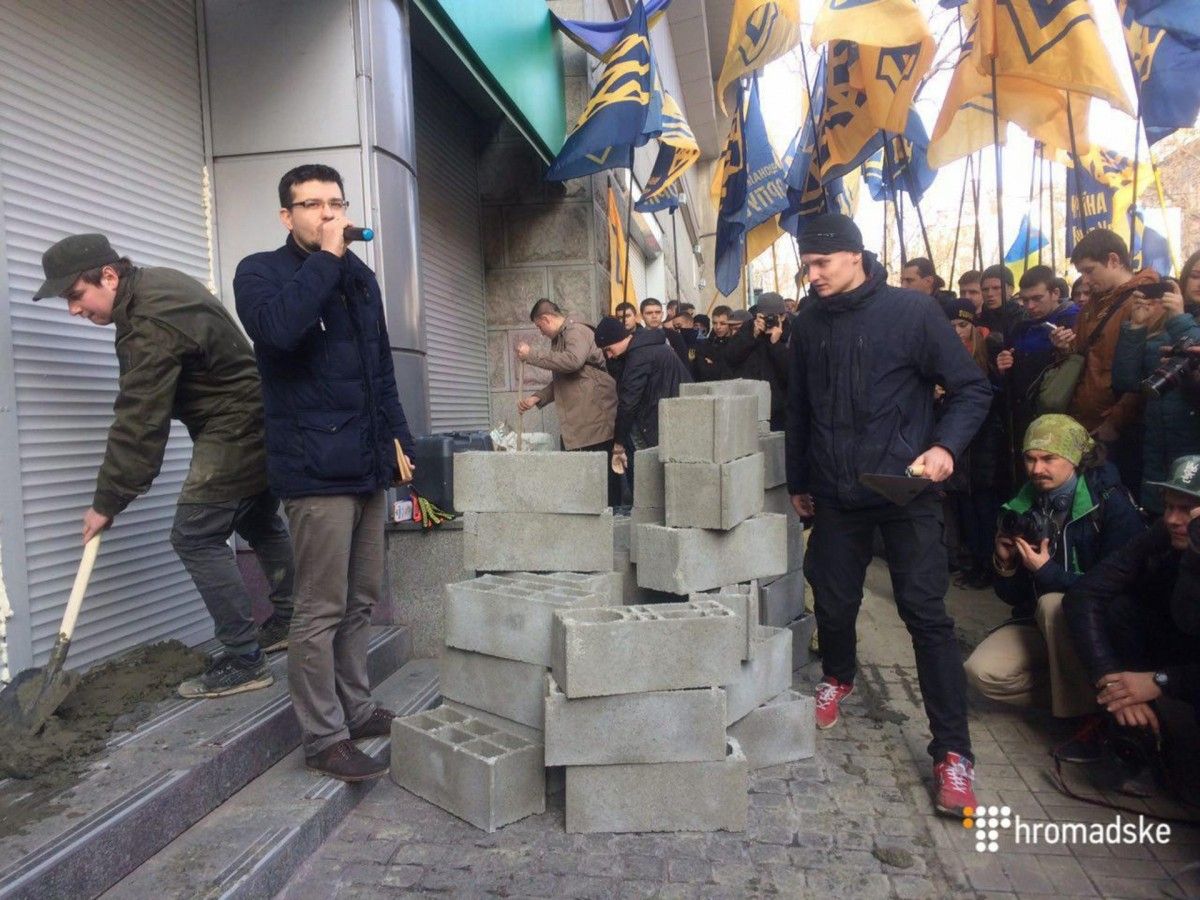 The central Sberbank branch in Kyiv is being bricked up by the protesters. Photo by Hromadske.

Compare it with the OFAC list that included the VTB Bank as early, as July 2014, its subsidiary in Ukraine — December 2015, and another subsidiary — the BM Bank that previously belonged to the Bank of Moscow — September 2016. The Vnesheconombank has been under the US sanctions since July 2014 and its Ukrainian subsidiary Prominvestbank — sinceJuly 2015. Sberbank was already on the list in September 2014 and Sberbank in Ukraine — in December 2015.

The Ukrainian methods of working with the sanctions lists is somewhat different from the American one.

Practically every new decision of the National Security and Defense Council, and later, in the presidential decree, has been approving new lists of all persons subject to sanctions that have been replacing the earlier ones. In May 2017, by decree of the President, all of the 2015-16 sanctions decisions have lapsed and have been replaced with a new long list. In May 2018, and a month later, in June 2018, the yet new lists appeared again…

It would be great to believe that it is the extra thorough work on the lists requiring tracking the new connections and status changes and the like that causes the lists to be continuously redone.

…15 banking institutions from the Ukrainian list have already lost the banking licenses in 2015-17 and 11 of them have been declared bankrupt.

At the same time, the OJSC Jeepbi Mortgage that got on the Ukrainian list in May 2018, is listed in the Russian State Register as the Bank "GPB-Mortgage" and has been in the process of liquidation since December 2016.

On September 1, 2016 GPB-Mortgage Bank was added to the US Sectoral Sector List, and on December 30, 2016, its shareholders’ meeting adopted a decision "On termination of activities in the form of voluntary liquidation." The banking license was revoked on February 21, 2017.

Meanwhile, when TAScombank, owned by Sergiy Tigipko, bought Lviv’s VES Bank from Sberbank in December 2017, that bank was taken off the sanction list earlier approved by the National Security and Defense Council on March 1, 2018. Incidentally, TAScombank, as can be seen on its website, is still actively cooperating with the Russian Sberbank.

A lot of questions also arise around the fact that the Crimean Black Sea Development and Reconstruction Bank (CBRD) and the Sevastopol Morskoy Bank fell under the Ukrainian sanctions only in May 2018. Is it possible that they could have fallen through the cracks? Or did someone badly need them for financial transactions?

By the way, «not noticing» those two banks would have been simply impossible, as they are the only Ukrainian banks remaining in the occupied Crimea and re-registered under the Russian legislation.

CBRD, controlled by Mikhail Vitkov, Chairman of the Supervisory Board of the Bank and former Minister of Finance of the Crimea, since March 18, 2014, has been used by the occupiers to accumulate tax payments by Crimean entrepreneurs, so that all the taxes remain in the "Republic of Crimea" (the order #60 of the "Ministry of Finance of the Republic of Crimea" from June 18, 2014). And the Crimean business was forcibly switched to the CBRD for the tax payment services.

Both bank’s licenses were revoked by the National Bank of Ukraine on May 6, 2014.

As already mentioned, there are 19 foreign subsidiaries of Russian banks on the list of the American Agency for the Control of Foreign Assets. That is a consequence of US sector sanctions that included institutions linked to the Sberbank of Russia, Vnesheconombank, VTB Bank, Gazprombank and former Bank of Moscow.

The Ukrainian sanctions, however, have not been extended against those institutions. In addition, many Ukrainian banks have correspondent links with the foreign parties on the American lists.

For example, in June 2018, the website of the Belarusian subsidiary of the Sberbank of Russia, BPS-Sberbank, listed the following Ukrainian banks as having correspondent accounts with that institution: PUMB, Clearing House, GRANTBank, Ukreximbank, Bank Credit Dnepr, Prominvestbank, Oschadbank, Poltava-Bank, Southern, Polikombank and the subsidiary of the Russian Sberbank.

The Monitoring Group recommends to:

List of the Banks Currently Under the Ukrainian, US and EU Sanctions due to the Russian Aggression Against Ukraine is available here.