The Stormy Summer of 2017 in the Ports of the Occupied Crimea: "Foreign Crimean Grain Fleet" and… Ukrainian Reloaders 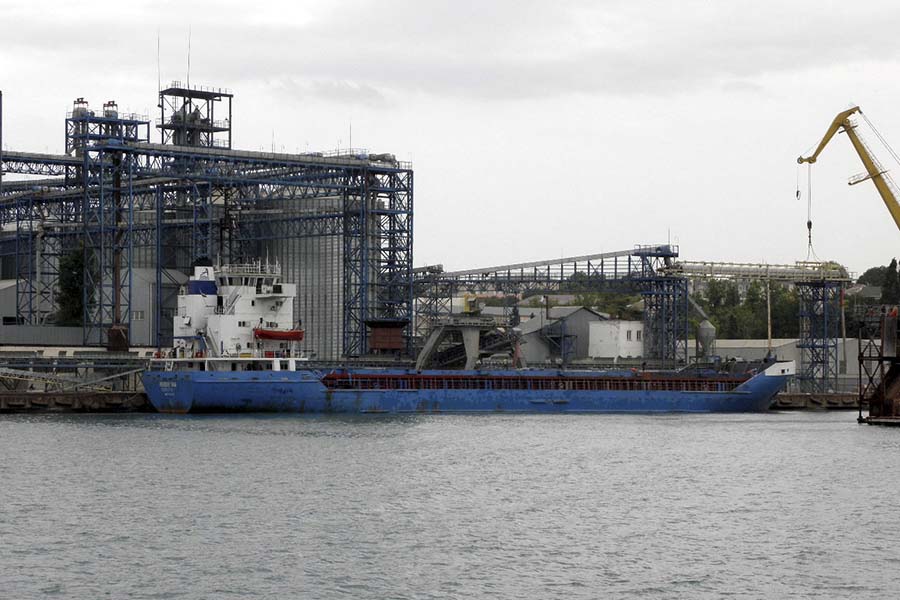 Lebanese PRINCESS MARIA (IMO: 7528556) dry cargo ship loaded with 3000 tons of Crimean grain for Beirut at a grain terminal in the Sevastopol Sea Fishery Port in Kamyshey Bay on July 4, 2017

The Black Sea Institute of Strategic Studies, Maidan of Foreign Affairs and BlackSeaNews monitoring center continues presenting the results of its ongoing monitoring of the violations of the Ukrainian and international sanctions against the Russian-occupied Crimea by the sea vessels.

Below, we offer for your attention the main trends and specifics of the situation between June 1 - August 31, 2017, as well as the generalized data for 2017.

To read our previous material, click here: The Stormy Summer of 2017 in the Ports of the Occupied Crimea: the Real Numbers of the Infringing Vessels and Lay-Up as a Growth Factor (1)

Summer 2017 Trends:
How Foreign Grain Ships Have Replaced the Russian Ones

The main feature of the summer of 2017 is the uncommon before massive attraction of foreign – non RF - vessels for transportation from the ports of Crimea.

We have been repeatedly noting that Russia has a significant shortage of the river-sea type vessels. The shortage has considerably increased further after the Crimean occupation, especially after the complete blockade of commodities from mainland Ukraine.

In the summer of 2017, via their maritime brokers, the occupying authorities of Crimea turned to shipowners of Turkey, Romania, Lebanon, Egypt, and Greece with export orders for the large volumes of Crimean grain.

The reason was the record in the last eight years grain harvest in Crimea: due to favorable weather conditions, the occupied peninsula harvested 1.7 million tons instead of the typical 1.5 million. That led to the vigorous attempts to facilitate grain export, as the storage capacity of Crimean elevators was insufficient.

Simultaneously, for the first time during the occupation, we observed foreign ships being used for the shuttle transportation of grain from the terminals of Sevastopol and Kerch to the two transshipment areas (see map):

(1) the Kerch Strait in the water area of ​​the Port Kavkaz; the official name is Anchorage (raid transshipment area, raiding berth) No. 451;

(2) the area of ​​unofficial raiding transshipment (so-called "Tortuga") in 12 miles, that is 22 km south of the Kerch Strait outside the territorial waters of Ukraine and the Russian Federation.

In the summer of 2017, 33 vessels of Russian shipowners and almost an equal number - 29 - belonging to shipowners from other countries worked at the Crimean ports, excluding active vessels permanently based in Crimea, mainly ferries, and repair and maintenance ships.

20 out of the 29 foreign vessels transported grain export, carrying in August 2017 alone up to 100 thousand tons for export or to the transshipment areas for further exporting.

That non-standard situation had led to the fact that during the summer months of 2017, for the first time since the beginning of 2015, the number and share of foreign, non-RF, infringing ships began to grow.

Ratio of the Russian- and Non-Russian Owned Blacklisted Vessels
in January-August 2017, ship numbers Below is the same ration in percentages:

Ratio of the Russian- and Non-Russian Owned Blacklisted Vessels
in January-August 2017, % 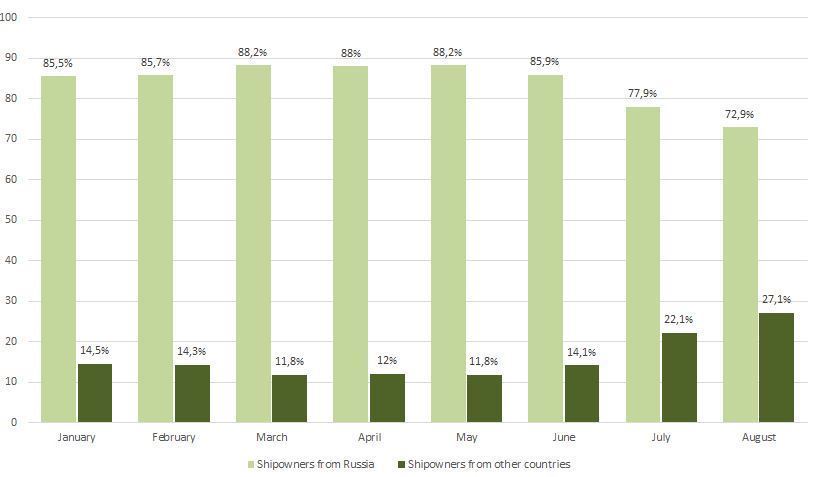 To see what that "shuttle" activity looks like in practice, let’s take one of the most well-known offenders, the Romanian cargo ship NADALINA (IMO: 8215754, Sierra Leone flag, the shipowner and the operator RUAD MARINE SERVICES SRL 3rd Floor, Bulevardul Mamaia 122, 900673 Constanta, Romania) as a case study.

07.05.17 - arrived at the grain terminal of the Kerch Sea Fishery Port (KSFP) from the transshipment area and reloaded to the bulk carrier.

15.07.17 - after unloading grain to the bulk carrier, went to Sevastopol, took a load of grain and again went to the transshipment area south of the Kerch Strait, dumping the load on a bulk carrier there.

All in all, in the summer of 2017, the "foreign Crimean grain fleet" included 20 vessels. The distribution on the basis of the country of shipowner’s registration is as follows:

* The above numbers of ships owned by the Turkish and Romanian shipowners' have a special trait: in April-May 2017, two well-known Romanian violators ADNAN H (IMO: 8215649) and ANDA (IMO: 8027638) were allegedly sold to a Turkish owner. Allegedly, because the routes have not changed and there are also other peculiarities that we won’t disclosed. We therefore, assume that sale to be fake and both vessels remaining under the control of the Romanian company. If that is the case, with 7 vessels, Romania would rank 1 in this rating.

Here is a complete list of the summer 2017 “Foreign (Non-RF) Crimean Grain Fleet” with detailed information on the ports of calls, dates, nature and volumes of cargo, etc.

What should not be overlooked here is the fact that in the summer of 2017, the "foreign Crimean grain fleet" that serviced the export of Crimean grain almost completely replaced the Russian one.

While 20 foreign ships were engaged in the "shuttle" transportation of grain export from the Crimean ports, the Russian Federation could allocate only 7 vessels for that purpose. Here is the detailed information and a complete list of the summer 2017 "Russian Crimean Grain Fleet."

Thus, of the 33 Russian-owned vessels, only 7 transported grain. The remaining 26 were engaged in delivering various cargoes to the peninsula, mainly rubble and sand, for the construction of the Kerch Bridge and the Tavrida freeway that will serve the bridge traffic. Meanwhile, of the 29 vessels owned by shipowners from other countries, 20 serviced the Crimean grain exports.

So, ultimately, the "foreign Crimean grain fleet" has enabled the aggressor state to proceed with the construction of infrastructure in the occupied Crimea without any distractions for grain and other exports.

The Summer 2017 Traits:
the Greek Return to Crimea for Grain 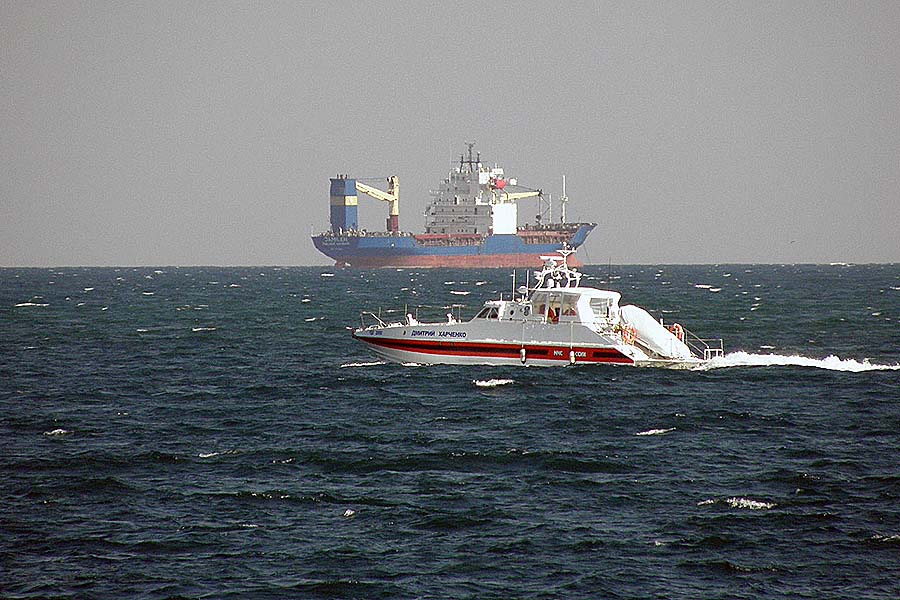 The JAMILEH dry cargo ship (foreground) of the NEREIDE MARINE SA, Piraeus, Greece, at a Sevastopol anchorage before arriving to the Avlita grain terminal on July 17, 2017.)

In the summer of 2017, vessels owned by shipowners from an EU and NATO member Greece returned to the ports of the occupied Crimea.

For the first half of 2017, Greek ships were not there either. But in mid-June 2017, 3 Greek ships began the prohibited grain export to the EU from Crimea. Two of them had already been blacklisted for the 2014 offenses, but why the NEREIDE MARINE SA company (Piraeus, Greece) decided to jeopardize the previously “clean” JAMILEH ship, remains unclear.

In our opinion, the resumption the Greek ships’ calls to the Crimean ports under the flags of other countries two years after their termination, testify to the attempts of the Greek shipowners to test the reaction of Ukraine and EU structures.

The Summer 2017 Traits:
Participation of the Odessa Bulk Carriers
in the Transshipment of the Crimean Grain

Even though it pains us to say this, we have to...

According to our data, which, incidentally, coincides with the observations of our peers, the Mirotvorets and Infonapalm volunteers, who published a detailed report on that, in the summer and early September 2017, 2 and 1 Ukrainian bulkers-reloaders, respectively, participated in facilitating the export of Crimean grain from the occupied peninsula. It should be noted that our colleagues managed to organize a round-the-clock observation for this.

These bulk carriers were on the transshipment anchorage in the territorial waters of the Russian Federation - at the moor #451. They took a Crimean grain cargo from at least 3 ships that had arrived from Sevastopol and Kerch and reloaded the grain on other bulkers ...

This is what the operation looks like: in the middle is f the Odessa bulk carrier-reloader SVYATOY PYOTR, on the left - a small dry cargo carrier unrelated to Crimea and on the right - a large bulk carrier accumulating cargo before the trip 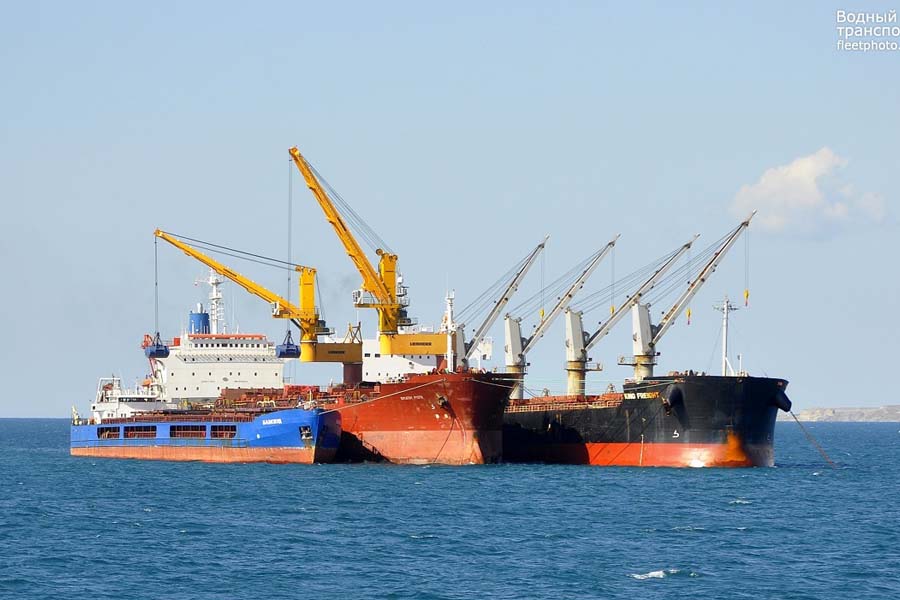 Indeed, the Odessa ships did not enter the occupied territory, but during the cargo loading, the captains certainly saw that they were accepting export from the occupied Crimea ... While we cannot state at this point whether the ships have violated the legislation of Ukraine, they most certainly did the European and American sanctions. 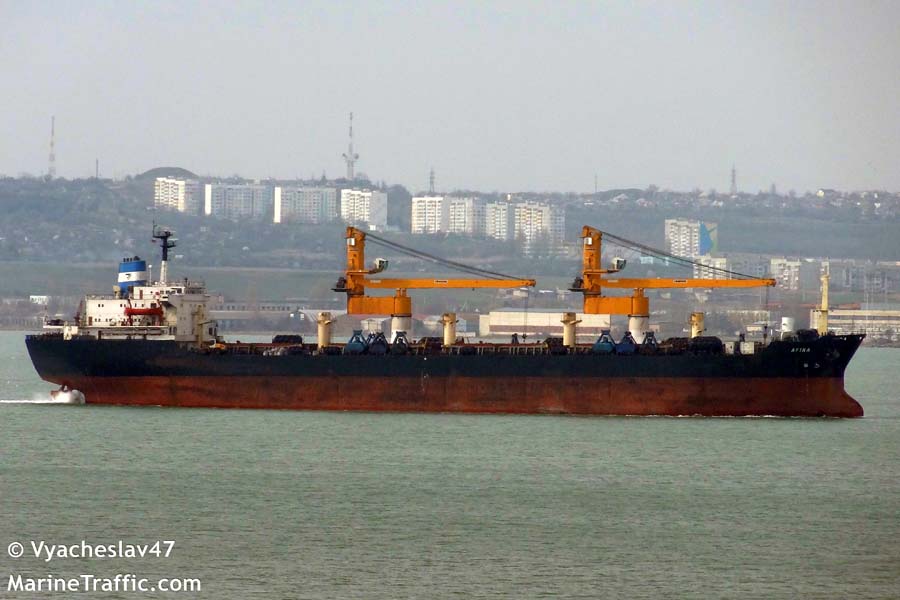 And this is Odessa bulker ALINA: 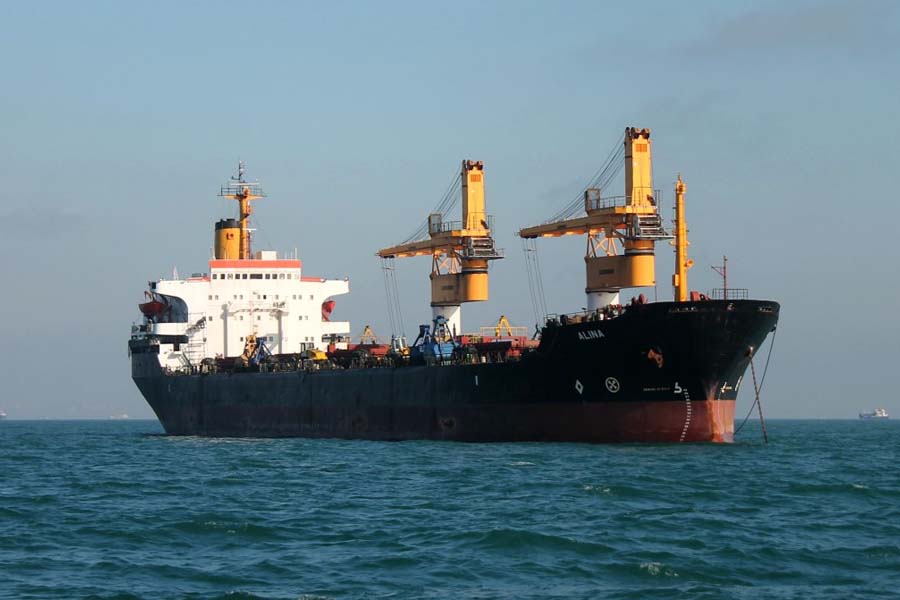 The table below shows the details of these bulk carriers and the vessels they accepted the Crimean cargo from.

We very much hope that our friends - the patriotic Odessa maritime community - will clearly explain to their colleagues where they can and cannot conduct “business as usual...”