The Stormy Summer of 2017 in the Ports of the Occupied Crimea: the Real Numbers of the Infringing Vessels and Lay-Up as a Growth Factor (1)

The Black Sea Institute of Strategic Studies, Maidan of Foreign Affairs and BSNews monitoring center continues presenting the results of its ongoing monitoring of the violations of the Ukrainian and international sanctions against the Russian-occupied Crimea by the sea vessels.

Below, we offer for your attention the main trends and specifics of the situation between June 1 - August 31, 2017, as well as the generalized data for that period since the beginning of 2017.

In addition, due to the large number of questions and increasing public interest to the subject, below we will attempt to answer and clarify some of the most common questions and misconceptions.

How Many Vessels-Offenders Are There?

The Dynamics of the Number of the Vessels-Offenders
in August-September, 2017 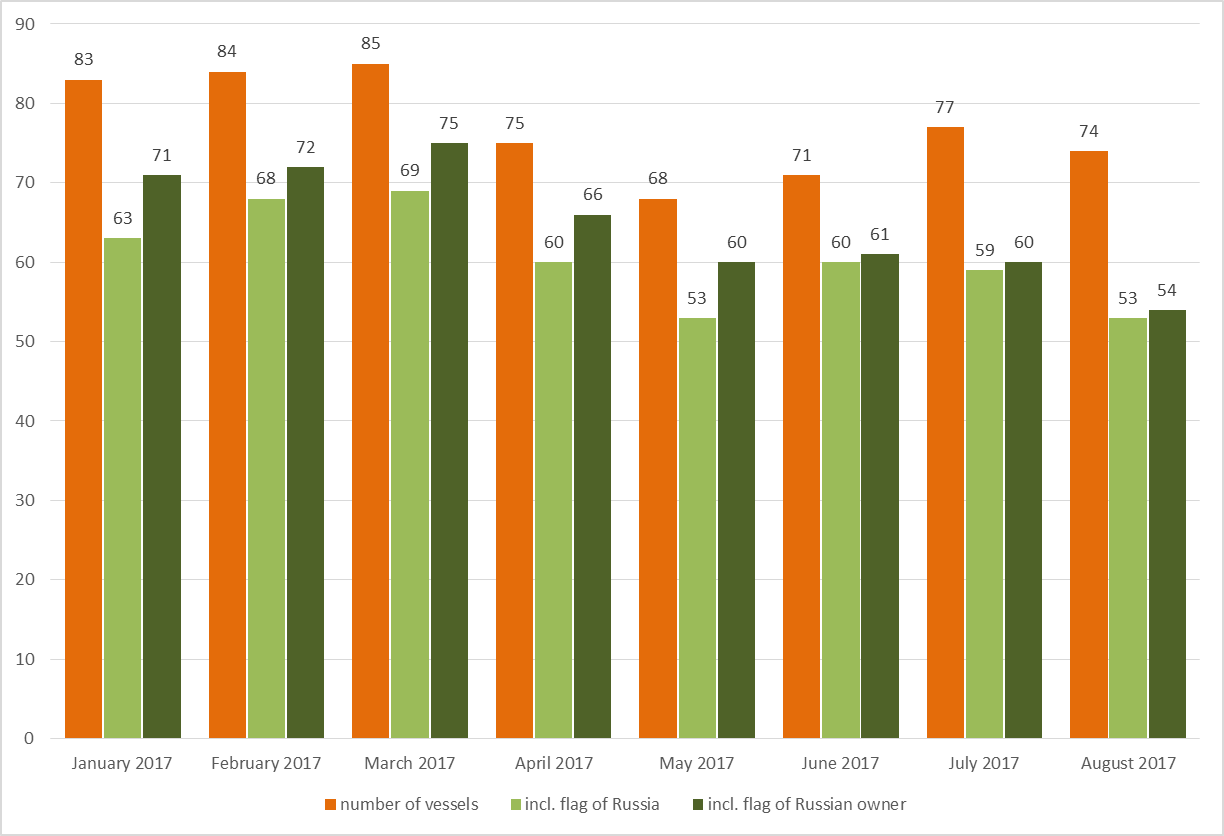 According to our data, since the illegal annexation of Crimea on March 18, 2014, as of September 1, 2017, the total number of ships-violators of the occupied territory regime and international sanctions in the ports of the Crimean peninsula is 313. All of them are entered in the general Database that is being updated on a daily basis.

We are absolutely confident that this number is more accurate than other numbers appearing in the domestic and foreign press.

The figures that from time to time are published in the media, are typically close to 600 and take into account small vessels of the port and technological fleets , such as floating cranes and support ships, that were captured by the occupants in the Crimean ports and do not engage in transportation outside the peninsula. Thus, their automatic addition to the lists of offenders distorts the real picture of sea transportation. The motive of some foreign "researchers" is obvious – there are many parties around the world that strive to prove that "the sanctions do not work" and should therefore, be canceled.

The motives of some of our home researchers, however, remain unclear to us. Perhaps, they simply follow "the worse - the better" motto. And for those interested in simply reporting new “discoveries,” we can even give a free advice.

Every day during the 3.5 years of occupation of the Kerch-Yenikalsky Canal, that is, the Kerch Strait, hundreds of ships are transiting it in both directions. For example, on September 31, 2017, 158 vessels did.

Technically, we can enter all of them in the black list because the Kerch-Yenikalsky Canal is part of the water area of the Russia-occupied Kerch Sea Trade Port that is officially closed for navigation. In that case, the number of violators would be in the tens of thousands...

Unlike the others, The Maidan of Foreign Affairs and BlackSeaNews monitoring group, does not consider the tug, pilotage, work and passenger boats and other vessels of the port fleet - ship supply vessels, floating cranes, garbage collectors, oil products, sewage water collectors and rescue vessels – seized by the occupants in the ports of the Crimean peninsula, violators.

We also do not take into account vessels of the Chernomornaftogaz technological fleet and the Crimean private fishing fleet, as well as the ships that for various reasons, happened to be in the Crimean ports before March 18, 2014.

In fact, these vessels must be included in another black list – of the expropriated Ukrainian property in the occupied Crimean peninsula and the invaders’ military trophies – that we are also putting together.

For the database of the ships-offenders, however, we consider only those vessels that carry cargo and passenger transportation to/from the ports of the occupied Crimea and/or enter the Crimean ports for repair.

In addition, we know and understand that recently, due to the vessel shortage, weather permitting, the Russians are trying to use such "river technique", as the so-called BBK - barge towing caravans – when a tug, often a river tugboat, drives or pushes a loaded barge to/ from a Crimean port. In the future, we plan to do a separate study specifically on that issue, but for now we can say that the technique has almost no impact on the overall statistics.

Our previous reference point was May 1, 2017, that is four months earlier, when we did a regular triple check of the black list that at the time, contained 299 vessels. See: The Real Shipowners of the Crimean Black List - - a BSNews Investigation.

What does "exposure of those not recorded earlier" mean?

None of the well-known quality marine monitoring systems provides the 100% coverage of all ships at sea and even in ports. They use a signal from the ship transmitter of the automated identification system (AIS) operating at the VHF frequencies. The distance of the guaranteed connection depends on the installation height of the coastal antenna, the antenna of the vessel, the number of coastal antennas, relief and other obstacles for the passage of waves, as well as such a significant factor as the weather conditions.

Not to mention, that some vessels-offenders turn off their AIS transmitters, despite the fact that it is strictly prohibited by the maritime conventions. In those cases, we apply other search methods that we will not discuss for obvious reasons. So, sometimes, a vessel’s call at a Crimean port can be established only a few weeks or even months after the fact.

That’s why the differences in the monitoring methods and the factors described above determine whether the numbers of offenders sometimes published by various sources, match. At the same time, we would like to point out that the Maidan of Foreign Affairs and BlaskSeaNews’ black list is the only open-access database of its kind.

Please, note that of the 313 blacklisted vessels, 2 are under arrest in the Ukrainian ports of Kherson and Reni, 1 was cut into scrap metal, and 3 sunk as a result of marine accidents in the Black Sea, including 2 - in the summer of 2017.

103 ships-violators were recorded in the ports of the occupied Crimean peninsula in June-August 2017. For the full list of summer offenders, click here.

Note that we do not say that they made calls at the ports of Crimea during that time because a significant number of the infringing ships were already there, having arrived several months or sometimes, even a year or two earlier for repair and remaining there under repair or lay-up. Also in that category are the ships that had been arrested in the Crimean ports by the occupation authorities.

Have we managed to track all the infringing ships or all their calls at the ports of the occupied Crimea?

Certainly, not. But according to our assessment, considering the effectiveness of our methods of combating the disconnected AIS, i.e., "ghost ships", we estimate our black list to be at least 90-95% complete.

The Main Categories of the Vessels-Violators:

To reflect the processes and trends adequately, the monitoring group identifies the following groups of infringing ships:

1. Boats that are laid-up or under repair (in the table – C Rep), i.e. those that do not engage in transportation and merely "fill the order lists" of the Sevastopol and Kerch shipbuilding and ship repair facilities; 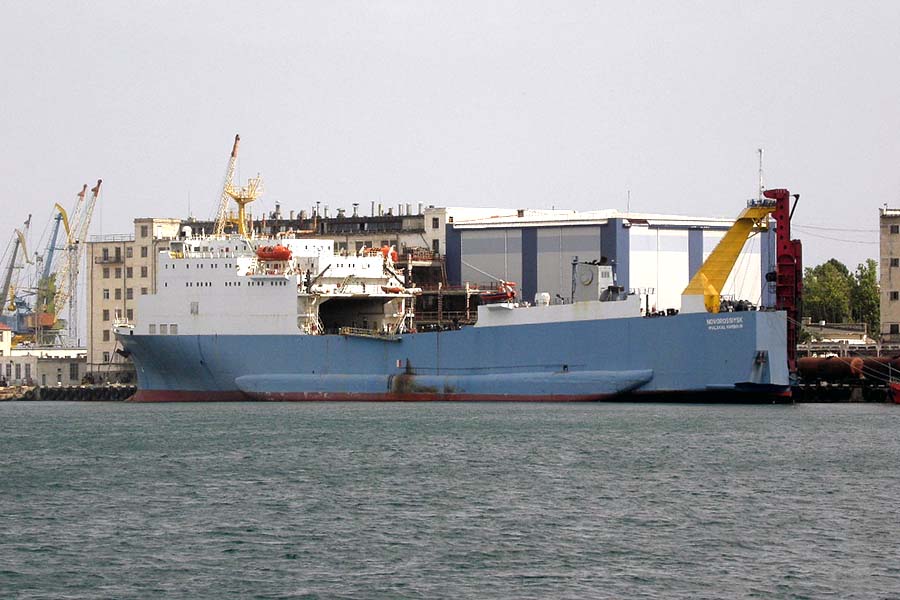 Ferry NOVOROSSIYSK, a former Turkish ULUSOY 1, IMO: 7822160, that played a prominent role in the first year of occupation working on the Novorossiysk-Kerch lines (Feodosia) when the RF was short of ferries, laid up at the Sevastopol’s Kamyshev Bay since July 7, 2015 and put up for sale for the crew’s debts, photo from 04.07.17.

2. Active vessels (C active in the table), i.e., those carrying out freight and/or passenger transportation to Crimea from ports outside the Crimean peninsula. Those, in turn, are divided into two categories:

2.1. Vessels - mainly ferries - permanently based in the ports of the Crimean peninsula (C a-perm in the table); 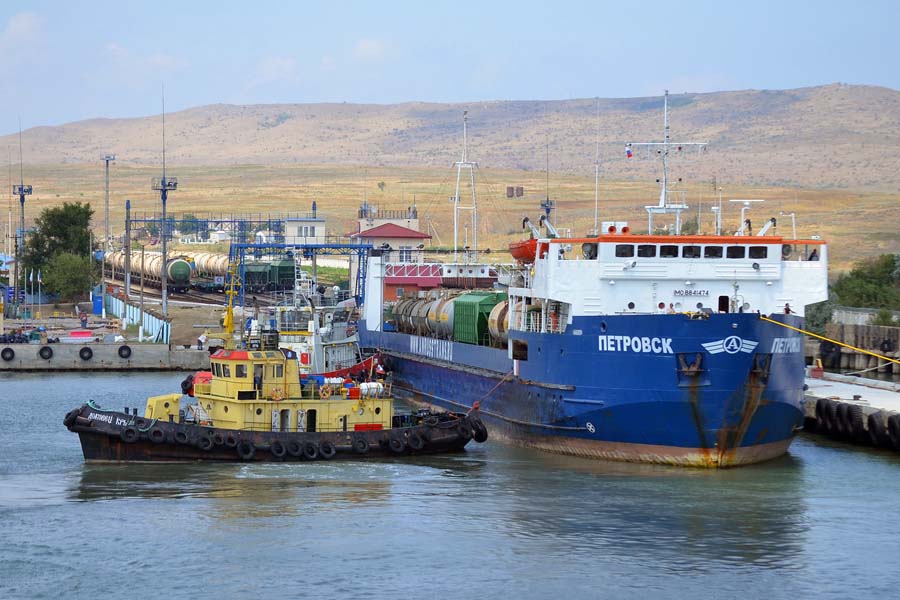 During June-August 2017, ships permanently based in the ports of the Crimean peninsula included ferries (19), Sevastopol-based ships engaged in predatory sand extraction in the Bakal spit area (4), passenger catamarans transferred from Sochi (2) and supply ships transferred to the Kerch port (3) - 28 vessels total.

2.2. External vessels (C a-ext in the table), i.e., those carrying out transportation from the ports of the Russian Federation (except for the Port Kavkaz, i.e., ferry crossing) and other foreign countries. 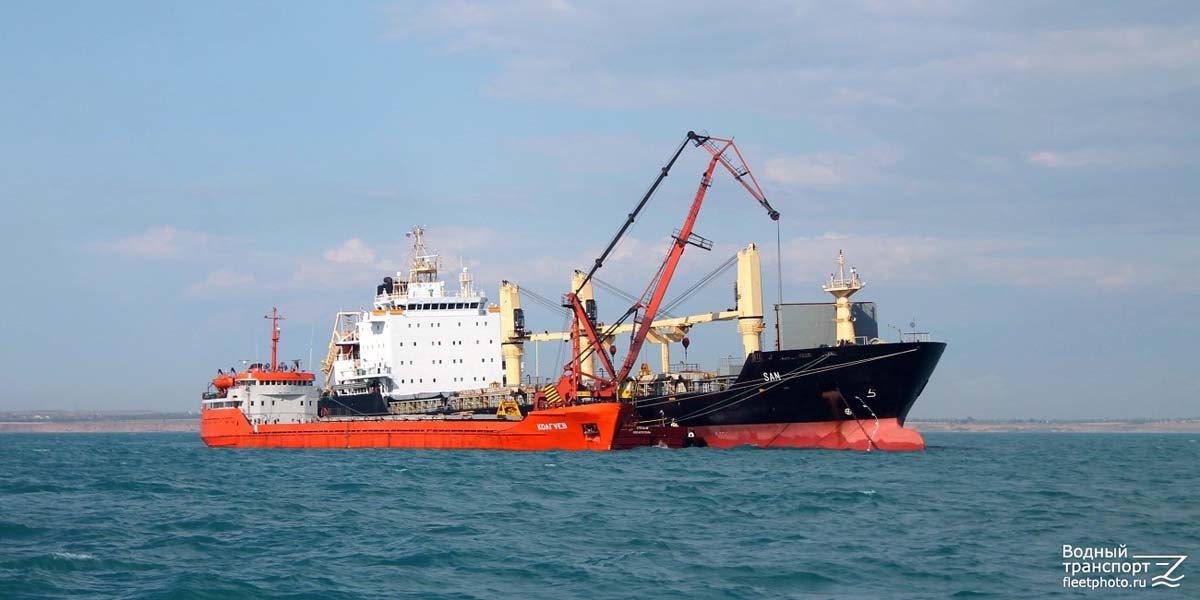 Thus, the number of infringing boats for a certain period is:

For a more thorough analysis of active vessels, the table below indicates their affiliation with the shipowners from the Russian Federation (C ext-RF) and other foreign countries (C ext-f). For vessels under repair and permanently based, such division is unnecessary because as a rule, they all belong to the RF shipowners.

Summary table of the number of infringing ships
by type of activity, flag states and shipowners
for January-August 2017

The number of infringing ships during
the summer months of 2017 is as follows:

The Trends of the Past Eight Months of 2017:
The Lay Up as a Growth and Drop Factor

Having analyzed the marine activity in the ports of the occupied Crimean peninsula since January 1, 2017 and separately, over the three summer months of 2017, we can identify certain new trends that require public knowledge and the corresponding reaction of the state authorities.

While the diagram suggests a drop in the number of infringing ships in the Crimean ports during the past eight months of 2017, that conclusion would be misleading as the drop is merely a reflection of a seasonality of sorts.

It has first appeared in 2017 and is very likely here to stay. In the winter of 2016 – 2017, for the first time, around 20 Russian ships of the river-sea type, mainly river tankers, wintered in the ports of Sevastopol and Kerch. 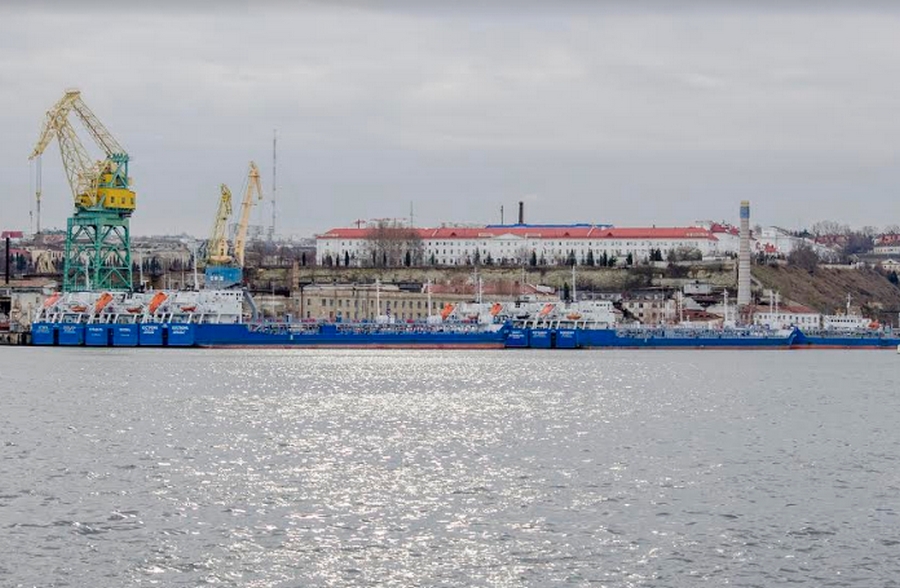 Ten RF tankers laid up for winter in Sevastopol at the moor of the Sevastopol Shipyard, January 2017. Photo from sevastopol.su

Prior to the occupation of Crimea, Russian river vessels wintered in the Don and Volga river backwaters that normally freeze in winter.

But recently Russian shipowners discovered that their fleet can winter in the occupied Sevastopol and Kerch without the damaging consequences of the frost the ice fields, and moreover, do so in the waters of the captured and expropriated Ukrainian shipyards, taking advantage of their repairs facilities before the new navigation season.

This can be clearly seen in the following diagram where the laid up and repaired ships are marked in blue: 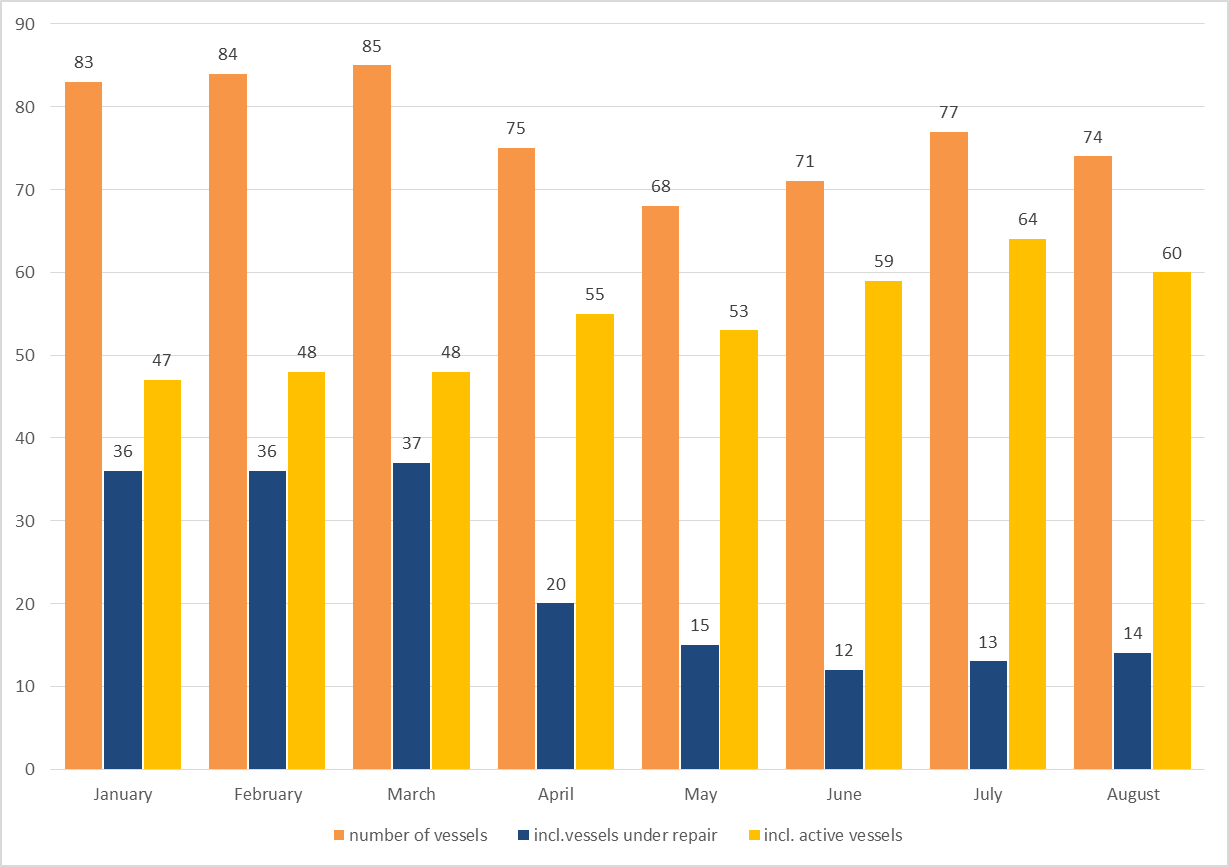 By the end of March 2017, that “wintering” situation ended and the statistics and dynamics of the infringing ship numbers returned back to “normal.”

These, however, are certainly not all the trends and characteristics of the past eight months of 2017.