The Illegal Mining of Natural Resources in Crimea. Part 1. The Development of the Stolen Shelf

Over 2017, in violation of the norms of the UN International Convention on the Law of the Sea, Russia continued the illegal extraction of hydrocarbons in the waters of the Azov and Black Seas adjacent to the occupied Crimea.

PJSC Chernomorneftegaz became one of the first enterprises to be seized by the invaders at the time of the occupation, together with the fields where the company was engaged in the extraction of natural gas and oil, both on the peninsula and on the Black Sea shelf. The Ukrainian company owned 17 deposits, 11 of which were gas, 4 - gas condensate and 2 - oil. The total reserves of all the deposits: 58.56 billion cubic meters of natural gas , 1231 thousand tons of gas condensate and 2.53 million tons of oil. 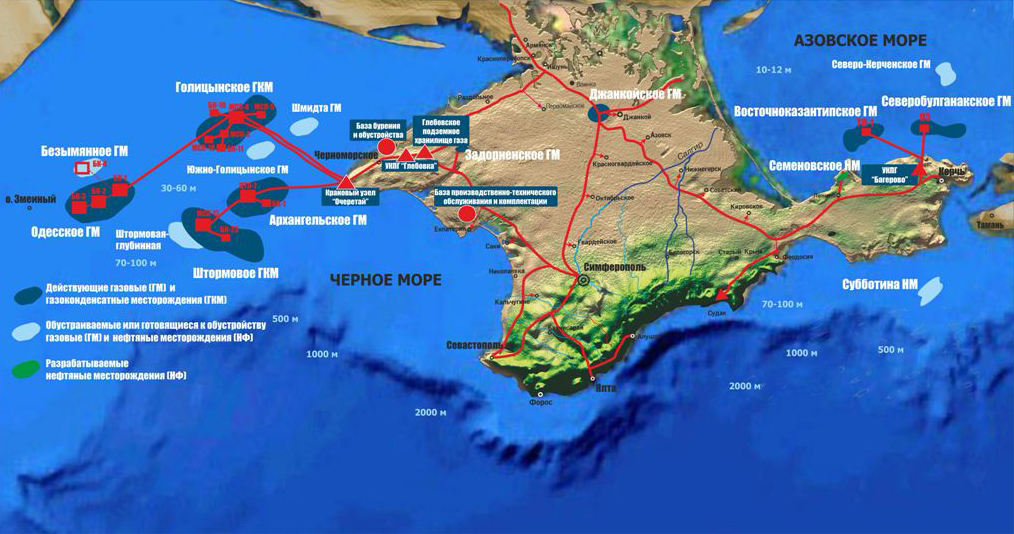 According to the official website of the expropriated enterprise renamed State Unitary Enterprise of the Republic of Crimea (SUE RC) Chernomorneftegaz, the illegal mining is now conducted on the Black shelf and in the Azov Sea waters, as well as on the land in Crimea. Currently, Chernomorneftegaz is developing 9 fields: 2 gas condensate (Golitsyn and Shtormovoye), 6 gas (Arkhangelskoye, Dzhankoyskoye, Zadornenskoye, East Kazantip, Severo-Bulganak and Odessa) and one oil (Semenovskoye). 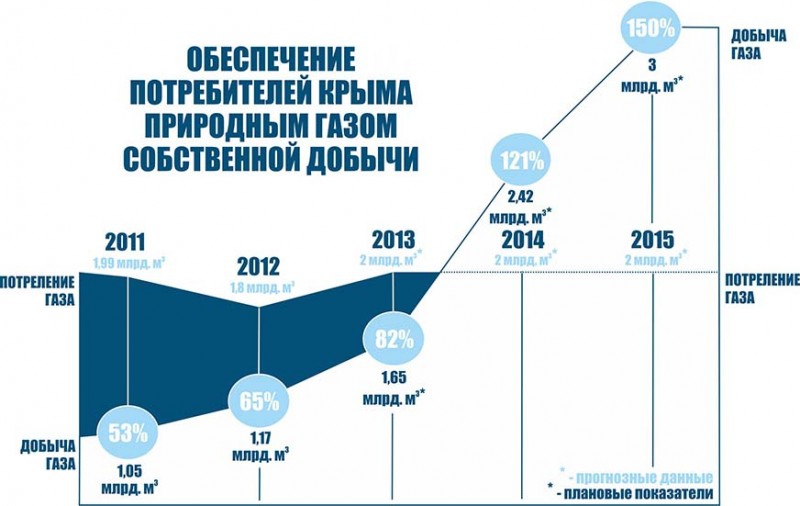 Gas Supply of the Crimean Residents from the Local Extraction

In 2014 it was announced that "today the enterprise is at a new stage of its development. The plan for the near future is the search, development and commissioning of new fields, the development and reconstruction of the gas trunkline system and the expansion of the capacity of the Glebov underground gas storage facility, as well as the upgrade and modernization of the equipment."

As early as the spring of 2015, the occupation authorities were confident that the Crimea could fully meet the demand with its own natural gas production. And earlier, in October 2014, the "Minister of Fuel and Energy of the Republic" stated that "the authorities of Crimea do not exclude the possibility of selling the surplus gas produced by Chernomorneftegaz to Ukraine.

But already during the 2016-2017 heating period, there were reports of a shortage of natural gas for domestic and industrial consumers and of the temporary natural gas cut-off to consumers.

Despite the optimistic 2014 plans that provided for an increase in the production of natural gas to 3 billion m3 as early as 2015, the actual performance of the seized enterprise has demonstrated a very different dynamics: 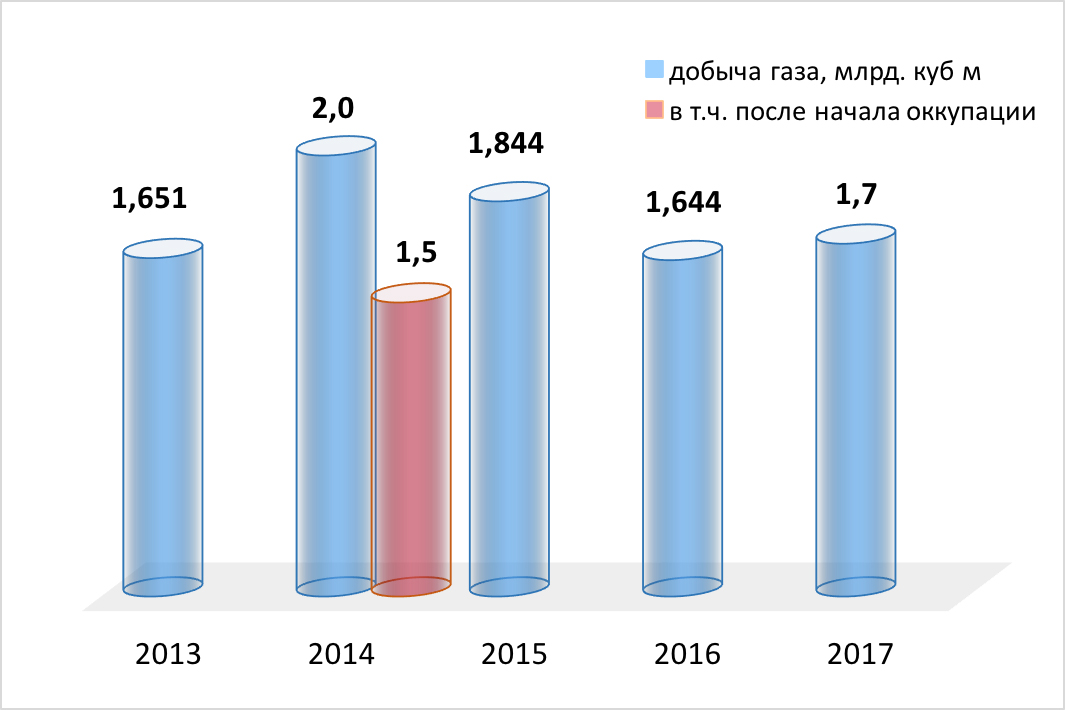 Extraction of natural gas in the Crimea and the Black Sea shelf in 2013-2017, billion m3

As a result of international sanctions, large-scale plans to develop the captured shelf were not to be realized.

In December 2014, the drilling of two wells at the Odessa gas field was resumed and in February 2015, the director of Chernomorneftegaz announced the wells commissioning.

It should be noted that drilling was carried out by the captured high-tech Ukrainian Peter Godunanets and Nezavisimost JDRs that were demothballed by the invaders in October 2014.

In 2015, five new wells were commissioned. From the very beginning of 2015, the new wells were presented as a great success of the enterprise's work under the sanctions.

"Thanks to the efforts of the drillers who worked in the difficult conditions of the sanctions, when sometimes we couldn’t get the parts, we’ve managed to completely finish the drilling of two wells," Neftegaz.RU quotes the director of Chernomorneftegaz.

In April 2017, a new Odessa deposit well started operation. From April to August, according to the Crimean "government", more than 60.0 million m3 of natural gas were extracted from that well, which increased the average monthly production by 13.7%.

However, the occupation Council of Ministers of Crimea admits that "due to the exhaustion of the resource of the operational fields, in the past two years, the production has declined".

According to Svetlana Nezhnova, Сhairman of the re-registered in Ukraine Chernomorneftegaz, "now the Crimean" Chernomorneftegaz " is working towards exhaustion and destruction. The production at the fields is falling ... Russia has built a gas pipeline to Crimea from Russia to pump gas from there. The shelf is expensive to develop. The reserves of the Shtormovoye and Arkhangelskoe deposits have been depleted. It is necessary to revive these wells, but that requires large investments." 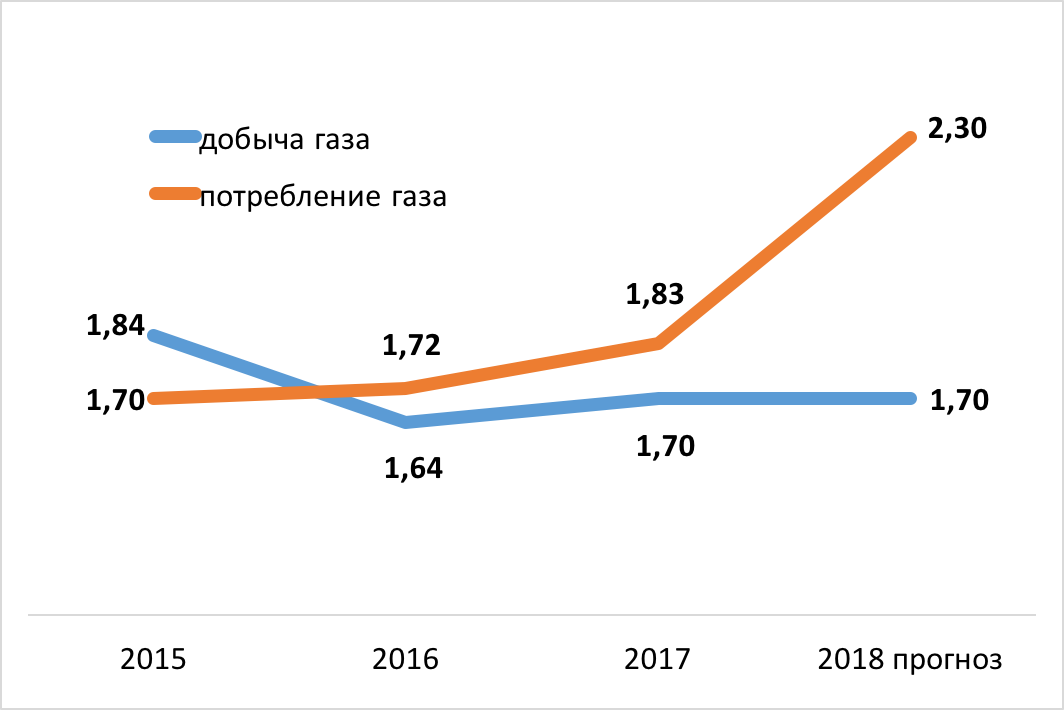 Under these conditions, the forecasts of the occupation officials are becoming less and less optimistic.

In January 2018, referencing the information from Chernomorneftegaz, the Crimean and Russian media reported that "in 2018 the volume of natural gas production is planned at the 2017 level of about 1.7 bcm."

The consumption forecast has also changed, due to the anticipated commissioning of two Crimean thermal power plants in 2018.

Production and consumption of natural gas in the territory of the occupied Crimea, billion cubic meters

But even those forecasts did not take into account Russia's forced end of operations at the largest gas field in the Crimean shelf zone, the Odessa one, now anticipated by July 1.

Russian officials acknowledge that the shutdown is connected with the international maritime law arbitration initiated by Ukraine against Russia in September 2016.

In November 2017, the Eurasia Daily news agency reported that on July 1, 2018, Chernomorneftegaz would stop operating the facilities at the Odessa gas field and Golitsyn gas condensate field, also located in the West Crimean shelf zone. The report referenced the November 23, 2017 internal order of the Chernomorneftegaz general director "On the Revision of the Production and Investment Program." The document indicates that the company’s long-term investment program has to be revised, the production at the Odessa field will be discontinued and that the "released workers" will require aid. 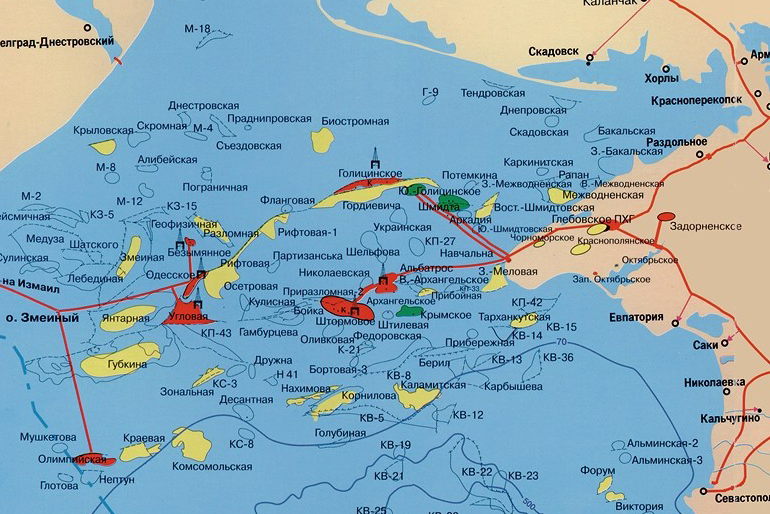 Today, the Odessa deposits provide almost half of the Crimean own gas production. The production figures of the past two years have not been disclosed, but in 2015 they produced 905 million cubic meters of gas.

Naturally, under the circumstances, the development of the new fields has been forgotten, despite the fact that in November 2016, the occupation Ministry of Fuel and Energy of Crimea reported that in 2017, Chernomorneftegaz planned to activate its geological exploration work on the Black Sea shelf. The plan concerned the promising, but under-explored Gordievich structure located in the marine economic zone of Ukraine northwest of the western coast of Crimea and south of the Golitsyn deposit. There Chernomorneftegaz counted on the discovery of gas reserves of 30 to 100 billion cubic meters.

Another problem is a technological one -- because of the sanctions, the Chernomorneftegaz now lacks the deep-water equipment.

The only thing that can be considered an absolute "success" in the Russian development of the Ukrainian shelf is the creation of military mini-bases on oil platforms.

The Russian military installed radar stations on the captured Ukrainian rigs and platforms. The facilities have about 130 armed servicemen. The gas production is carried out under the protection of the Russian warships. 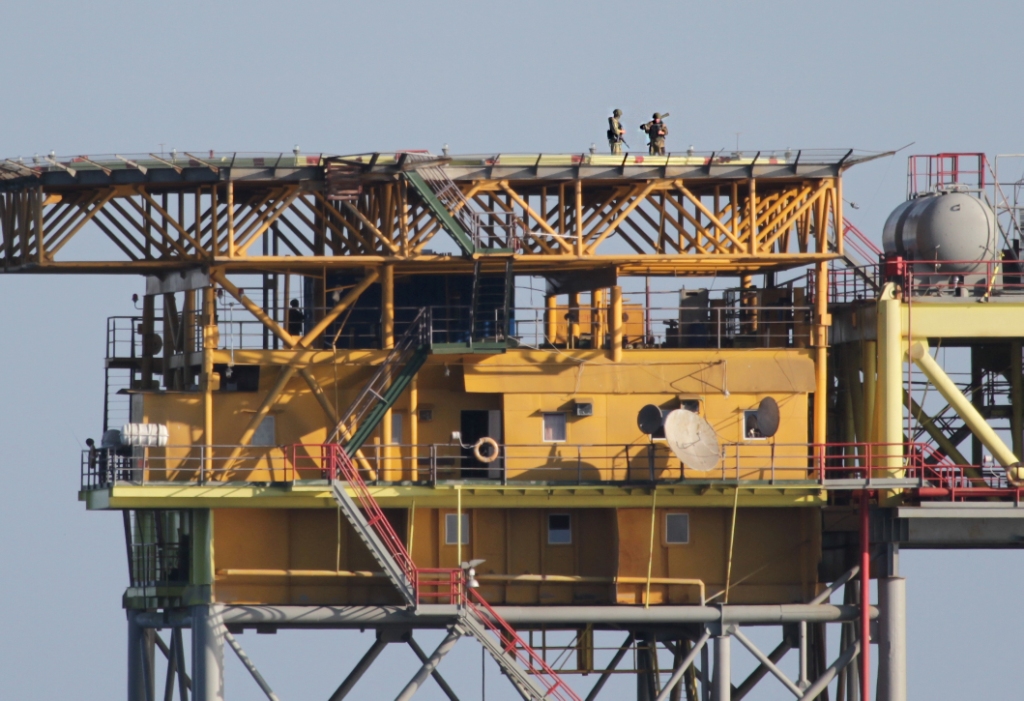 The impact of the international sanctions against Russia on gas production has been felt well beyond the part of the Black Sea shelf seized from Ukraine.

For instance, in October 2017, it became known that Rosneft unexpectedly decided to suspend its activities on the development of the South Black Sea subsoil areas located in the eastern part of the Black Sea where just in August 2017, Rosneft had been planning to drill two wells.

According to the RBC source, for the first time in the history of the company's work on Russian projects, it had its license suspended, largely due to sanctions that prevent the company from obtaining the drilling equipment needed for developing the shelf. 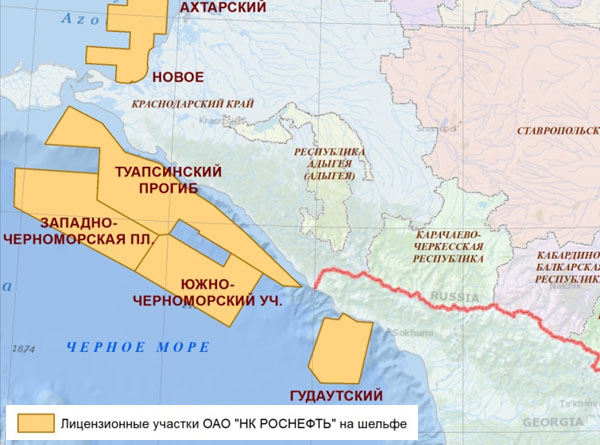 According to the Rosneft’s official representative Mikhail Leontiev, the license was suspended for a variety of reasons, namely the sanctions and the current market conditions that do not make "the area attractive for development." According to him, instead, the company will focus on the development of the West Black Sea deposits where drilling is anticipated to start this year with the aid of the Scarabeo 9 drilling rig by the Italian Saipem company. By contrast, the works in the South Black Sea area are suspended until the market conditions change and the oil production on the Black Sea shelf becomes more profitable, and until the drilling equipment is either built at the Zvezda plant or leased.

Ironically, the Peter Godovanets and Nezavisimost JDRs, seized together with the Chernomorneftegaz and renamed Tavrida and Krym respectively, are perfectly suited for shelf drilling in the eastern part of the Black Sea. But unfortunately for the invaders, they are subject to sanctions.

In 2017 the drilling on the Tuapse Trough was also scheduled to begin. In 2011, Rosneft and American ExxonMobil established a joint venture for the development of the three licensed subsoil plots in the Kara Sea and the licensed plot around Tuapse in the Black Sea. However, the 2014 sanctions did not allow ExxonMobil to take part in the Russian offshore projects.

The continuation of the works by the Italian Eni in the West Black Sea is also up in the air, since in December 2017, the company started drilling the exploratory well, but already in January, the chairman of the board Emma Marcegaglia made contradictory statements on suspending the activity due to sanctions.