The Avlita Sevastopol terminal: on the right - the grain section, on the left - the metal, cement and cargo containers section. The vast majority of grain illegally exported from the occupied Crimea is serviced at the Avlita.

By Andii KLYMENKO
Head of the BSNews and Maidan of Foreign Affairs monitoring group,
Black Sea Institute of Strategic Studies Expert,
Editor-in-chief of the BlackSeaNews, Yalta-Kyiv

The Black Sea Institute of Strategic Studies, BSNews and Maidan of Foreign Affairs monitoring group continues to publish our monitoring results of the violations of the Ukrainian and international maritime sanctions regarding the Russia-occupied Crimea.

The Major Trends of the Last 11 Months of 2017: Lebanon Maintains the Leadership

The Total Number of Infringing Ships, Including Permanently Based, Repaired and Laid-Up Vessels, per Months of 2017 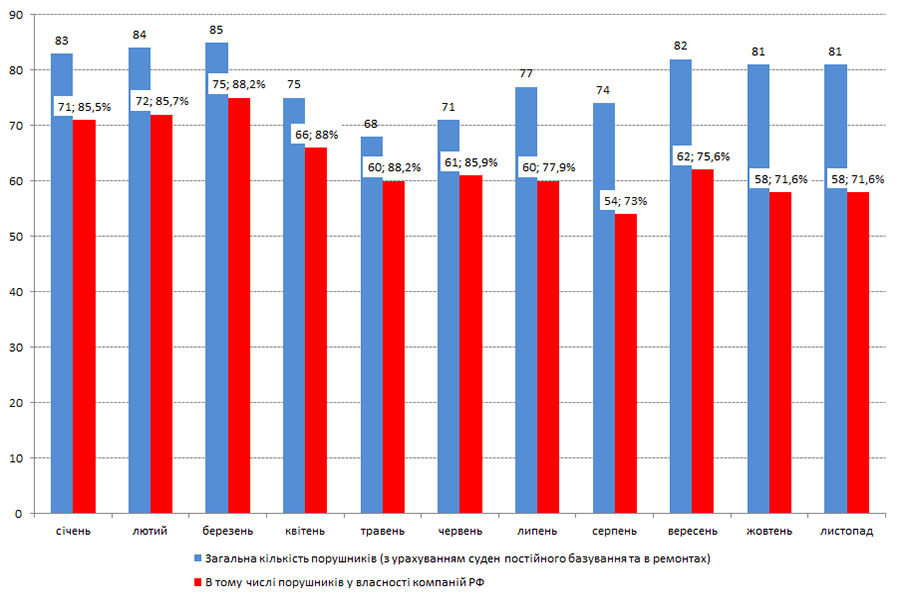 According to our data, as of December 1, 2017, the total of 328 seagoing vessels have violated the regime of the occupied territory and international sanctions in the ports of the Crimean peninsula since the date of its illegal annexation on March 18, 2014, All of them have been entered in our general database that is being updated daily.

The complete database of the “newbies” to the Black List can be found here: Ships-Violators of the Crimea Sanctions that Made First Appearance in Crimea in November 2017.

To adequately reflect the situation and the trends, the monitoring group identifies the following groups of infringing ships:

1. Vessels on lay up or repairs, i.e. those that do not provide transportation and merely "replenish the order package" of the Sevastopol and Kerch shipbuilding and ship repair enterprises; there have been 12 of those in November 2017. Among them was the KNYAZ VLADIMIR cruise liner that earlier that year served the Sochi-Novorossiysk-Yalta-Sevastopol-Sochi cruise route.

2. Active vessels, i.e. those carrying out cargo and/or passenger transportation to Crimea from ports outside the Crimean peninsula. Those, in turn, are divided into the two categories:

2.1. Vessels permanently based in the ports of the Crimean peninsula - mainly ferries;

In November 2017, the ships that were constantly based in the ports of the Crimean peninsula included ferries (19), Sevastopol-based vessels engaged in the predatory sand extraction in the Bakalsky Spit region (4), passenger catamarans transferred from Sochi (2) and ships transferred to the Kerch port (4) - the total of 29 vessels.

The complete list for that category can be found here: The List of Infringing Vessels Permanently Based in the Ports of Occupied Crimea as of November 30, 2017

2.2. External vessels, i.e. those carrying out transportation between the ports of the Crimean peninsula and the Russian Federation - except for the port of the Caucasus, which is a ferry crossing - and other foreign countries. 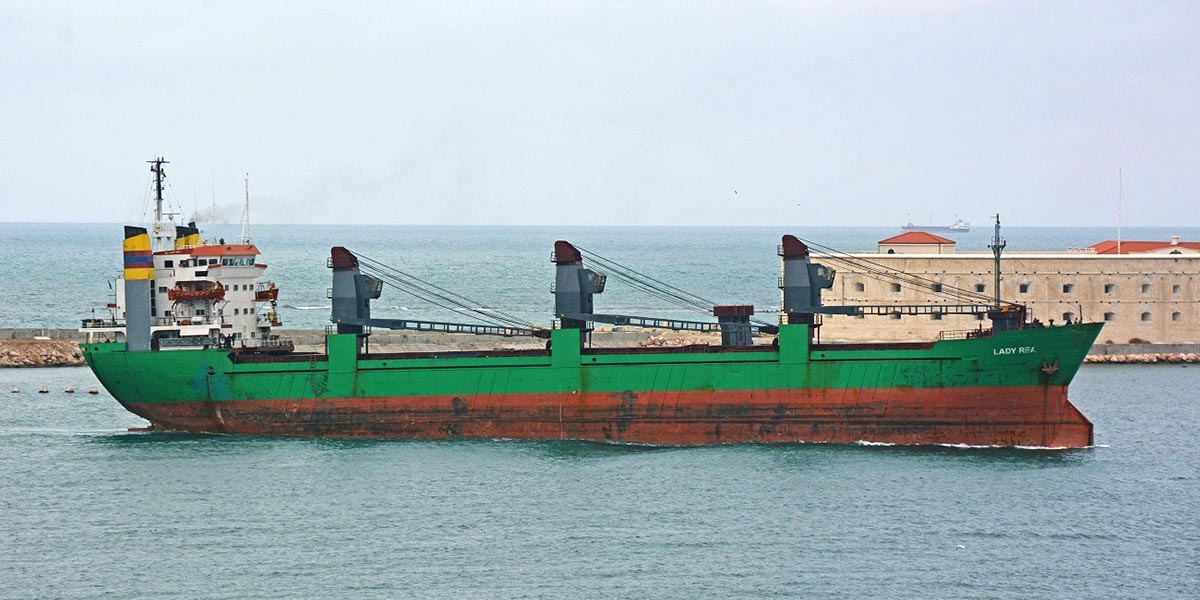 The complete list for that category can be found here: The November 2017 List of Active External Infringing Vessels

The table below shows the respective monthly statistics since the beginning of 2017.

In November 2017, the end of last summer’s tendency remained, i.e., the number of "external" – non RF - foreign vessels entering the ports of the occupied Crimea for the banned export of Crimean products, has exceeded the number of Russian vessels transporting goods to Crimea (except the ferries).

Just as in October, in September 2017, there were 23 "external" foreign offenders. 17 of the vessels - except the 29 ferries and other vessels permanently based in Crimea and 12 vessels in repairs - were Russian-owned.

The Total Number of Active Infringing Vessels, Excluding Permanently Based, Repaired and Laid Up by Months, 2017 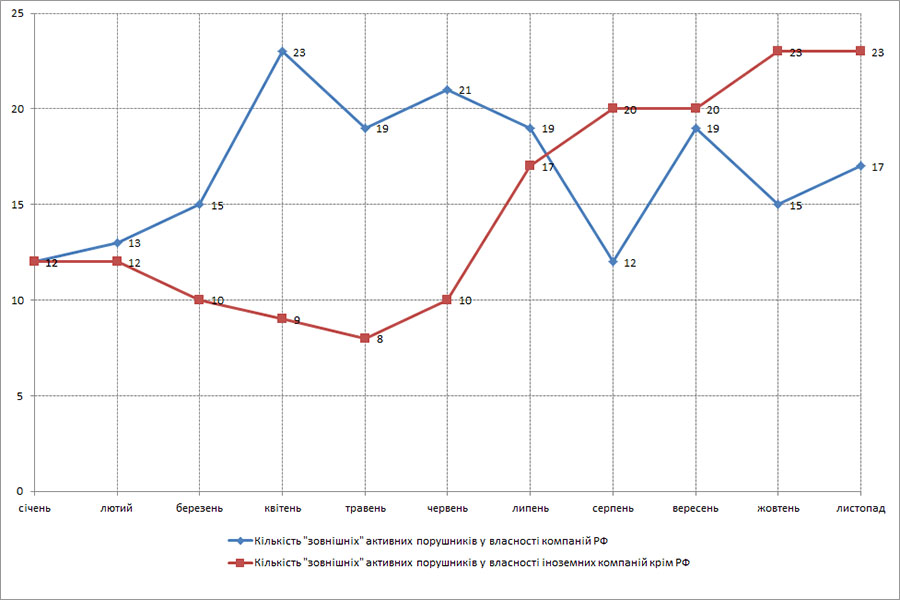 As we reported earlier, in September 2017, according to the country of registration, the first place among the perpetrators - not only in comparison with summer months but for the entire period of monitoring, in general - belonged to the "Lebanese merchant fleet" that provided 8 ships for the Crimean export.

That trend stayed with 8 Lebanese ships in October 2017 and even intensified with 9 in November.

Cargo to the Occupied Crimea in November 2017 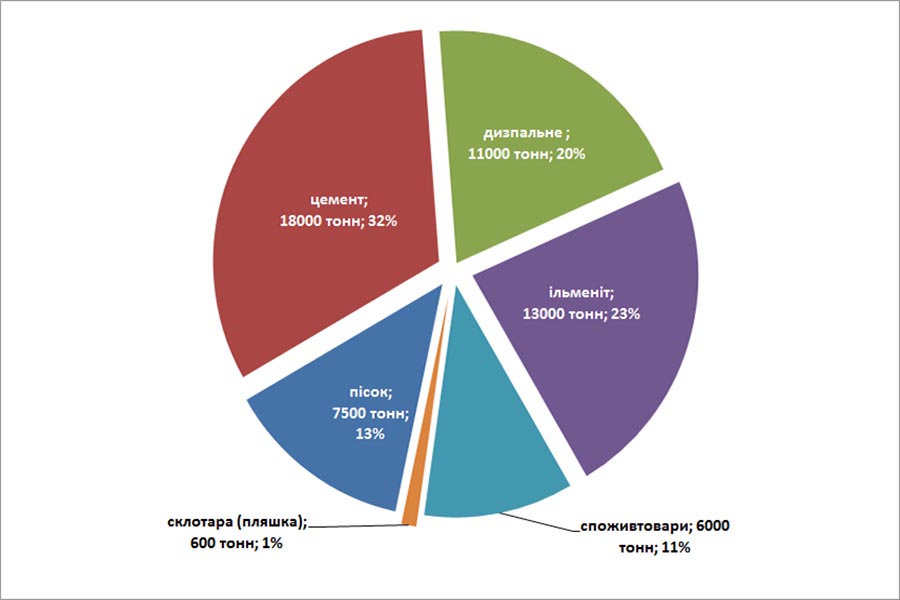 The main flow of goods imported to the ports of the occupied Crimea (except for the ferry traffic that accounts for the majority of goods) arrives on Russian ships from the Russian ports.

The main volumes of cargo are comprised with the building materials (sand and crushed stone), diesel fuel and glass packaging (bottles) for bottling wine and beer, as well as consumer goods.

In addition, the monthly cargoes of ilmenite ore - the raw material for the production of titanium dioxide – supply the Crimean Titan plant in Armyansk, Northern Crimea.

The complete list can be found here: Cargoes to the Ports of the Occupied Crimea in November 2017

Overall, the following cargo was delivered by seagoing vessels (excl. ferries) to the ports of the occupied Crimea in November 2017:

In total, 11 out of 17 vessels owned by companies of the Russian Federation, as well as 4 of 23 vessels belonging to shipowners from other countries, were engaged in sea freight transportation to ports of the occupied Crimea (excl. ferries).

Ten Thousand Tons of Cement from Turkey to Sevastopol

Earlier, the entire volume of goods imported by Crimea was provided by the merchant fleet belonging to the RF shipowners. But November, other foreign vessels that usually went for the Crimean export cargo in ballast, that is, without cargo, started joining the scheme.

On November 14, 2017, a notorious violator of the Crimean sanctions belonging to the Romanian shipowner, NADALINA (IMO: 8215754), delivered to the Sevastopol Sea Fishing Port 5000 tons of cement from the Turkish Black Sea port of Bartin, after which proceeded to Sevastopol’s grain terminal Avlita - that even after the occupation of Crimea is said to remain linked with Renat Akhmetov’s SKM holding - ​​where it took the cargo of 4500 tons of grain for the Syrian port of Tartus. 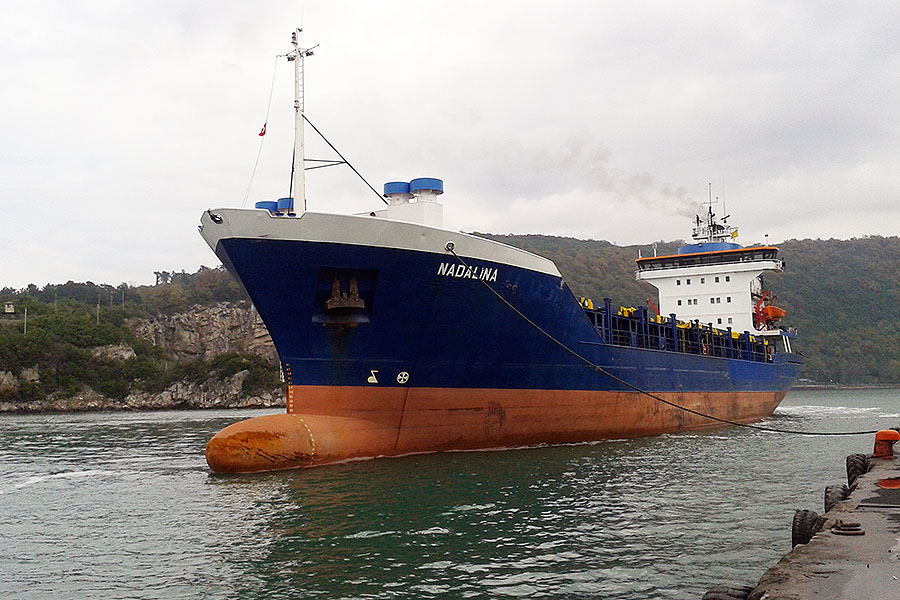 The same scheme - from Turkey cement to Sevastopol and from Sevastopol - grain to Syria or Lebanon - in November 2017 was used by another "veteran" of our black list, the Lebanese cargo ship RANDA (IMO: 8414283). On November 17, it delivered 5 000 tons of cement to Sevastopol dumping it at the Avlita terminal and then on November 25, moved to the Kamyshev Bay where it loaded grain for Beirut. 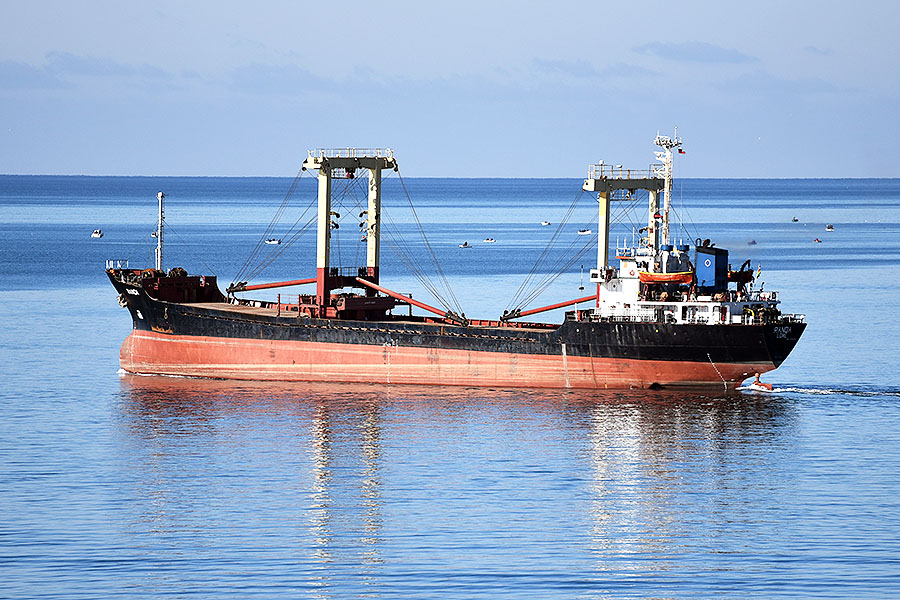 The De-Facto Commissioning of the New Ferry Line Zonguldak-Kerch 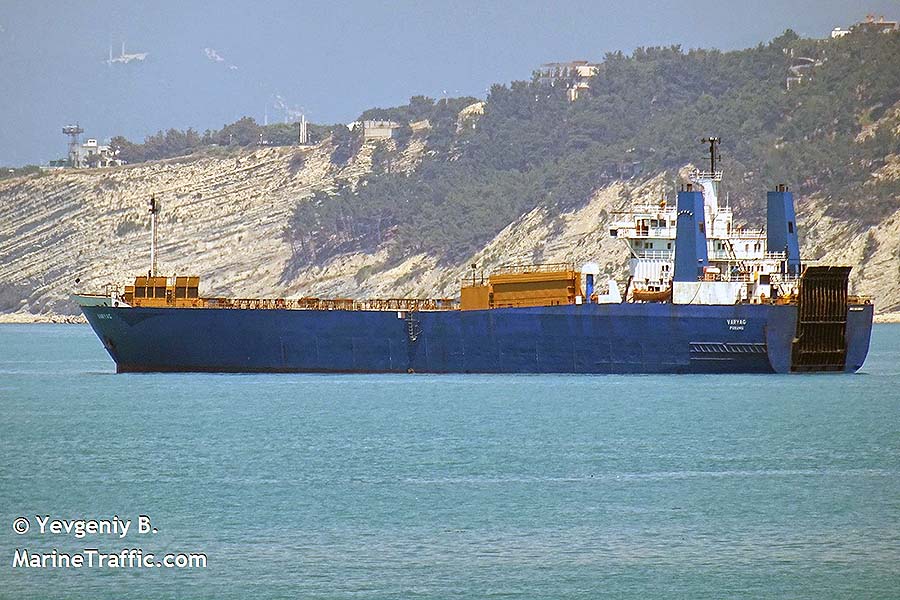 In the last report Violation of the Crimean Maritime Sanction in September-October 2017: the Lebanese-Egyptian Fleet we wrote that “on October 6, 2017, the authorities of the Chamber of Shipping of the Turkish Chamber of Commerce and Industry sent the "The Principles of Shipping in the Black Sea and Crimea" directive to all sea transport and port business providers indicating the need to "enact preventive measures that correspond to the foreign the policy of our country in relation to the restrictions imposed on vessel calls at the ports of Crimea.”

At the same time, in was October that we saw the beginning of the schemes to bypass these prohibitions: the well-known violator, Turkish ferry ERKE, in October 2017, actually launched a new ferry line Zonguldak - Kerch Sea Commercial Port. 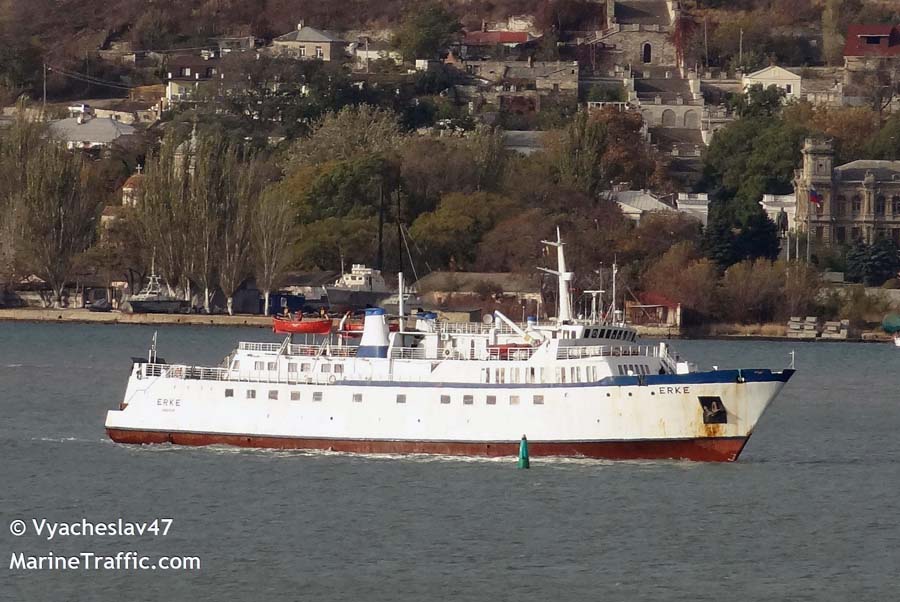 Turkish ferry ERKE arrives to the occupied Kerch on October 23, 2017

While at the end of October we have taken it as a result of a normal lag in the practical application of a new regulation, in November 2017, it became obvious that the Zonguldak port was not going to comply with the decisions of the Turkish authorities, as the Turkish ferry ERKE was joined by another notorious perpetrator, the Russian ferry VARYAG.

In November 2017, those two ferries made 3 trips/each from the Turkish port of Zonguldak to the occupied Kerch. Both ferries falsified the AIS information by listing port Kavkaz as the destination, then switching off the AIS transmitters in the Kerch Strait and heading for Kerch.

It should be noted that Russian ferry VARYAG is also known for numerous voyages from Novorossiysk to the Syrian port of Tartus, the site of the Russian naval base is located, with military equipment on board.

Something New: 10 000 tons of Ilmenite from Norway to Crimea via Romania on a German Boat 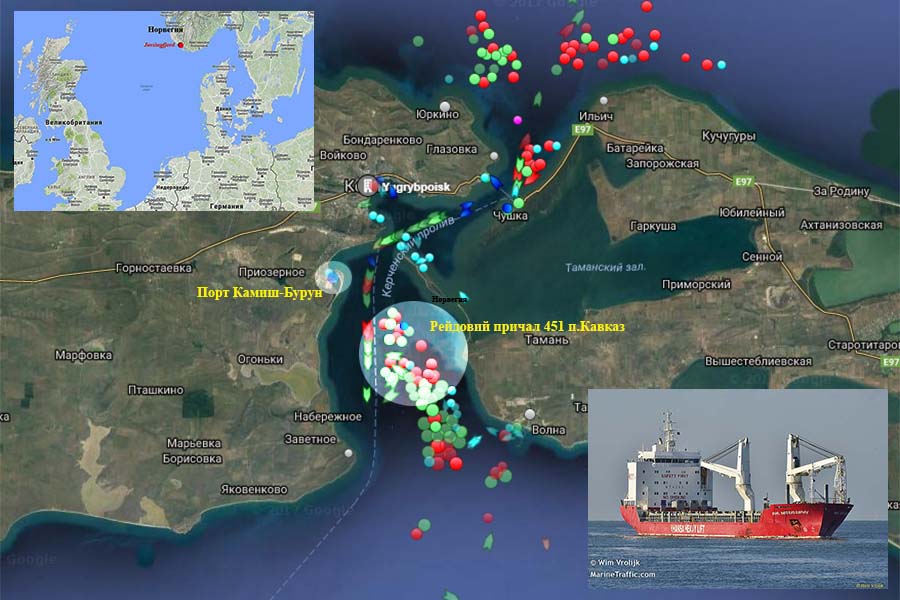 As we have repeatedly registered, the shipping of ilmenite to the Kerch port of Kamysh-Burun continues on a monthly basis. The ilmenite ore is being used by the single buyer in the occupied peninsula — the Titan plant in Armyansk, in the north of Crimea that is part of the corporate group owned by Dmytro Firtash.

Over the course of the year, we have followed the ilmenite supplying schemes circumventing the sanctions from the Ukrainian Pivdennyi port, Brazil and the largest one – from the Turkis Samsun. In the majority of cases, the ilmenite was carried to the designated transshipment area in the Kerch Strait (DTA #451 of the Russian Kavkaz port), then reloaded at sea onboard the Russian ships and later unloaded at the Kerch port of Kamysh-Burun.

But at the end of November 2017, the transportation of ilmenite to Crimea had taken a peculiar turn (German Ship Delivers 10,000 Tons of Ilmenite from Norway to the Occupied Crimea’s Titan Plant – a BSNews Investigation.)

On November 23, 2017, a German cargo ship HHL MISSISSIPPI (IMO: 9435765) arrived from the Romanian Constanta under the flag of Liberia to the roadstead of the Russian Port Kavkaz in the Kerch Strait (the same roadstead #451) and remained there until December 5, 2017.

The further investigation has uncovered that:

It was there that on November 3-6, 2017, HHL MISSISSIPPI accepted a cargo of 10,000 tons of ilmenite ore for the occupied Crimea.

It’s the first time that Norway was caught supplying ilmenite to the occupied peninsula. Earlier, similar schemes from the Ukrainian port Pivdennyi, Brazil and the largest one - from the Turkish port Samsun – had been recorded. As a result, having been highlighted in various journalistic investigations, they attracted the attention of those states’ authorities and were stopped.

The joint monitoring group of the Black Sea Institute of Strategic Studies, the Maidan of Foreign Affairs and the BlackSeaNews is confident that after this publication the appropriate conclusions will be made as well...

The full text of the investigation can be found here: German Ship Delivers 10,000 Tons of Ilmenite from Norway to the Occupied Crimea’s Titan Plant – a BSNews Investigation

The November 2017 Exports – What and Where to 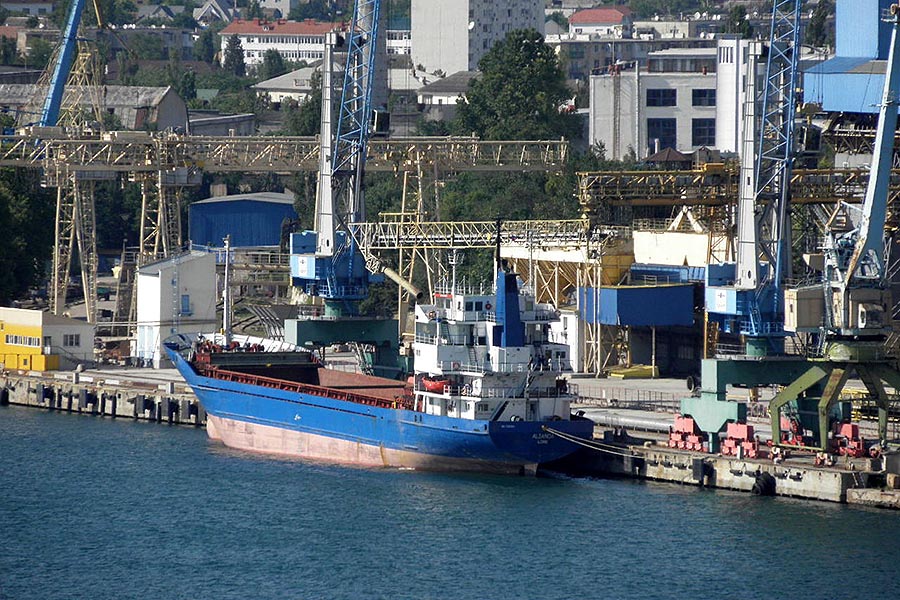 On November 7, 2017, Lebanese cargo ship ALIANCA carried 2500 tons of Crimean grain from the Sevastopol’s Avlita terminal to the Egyptian port of Alexandria 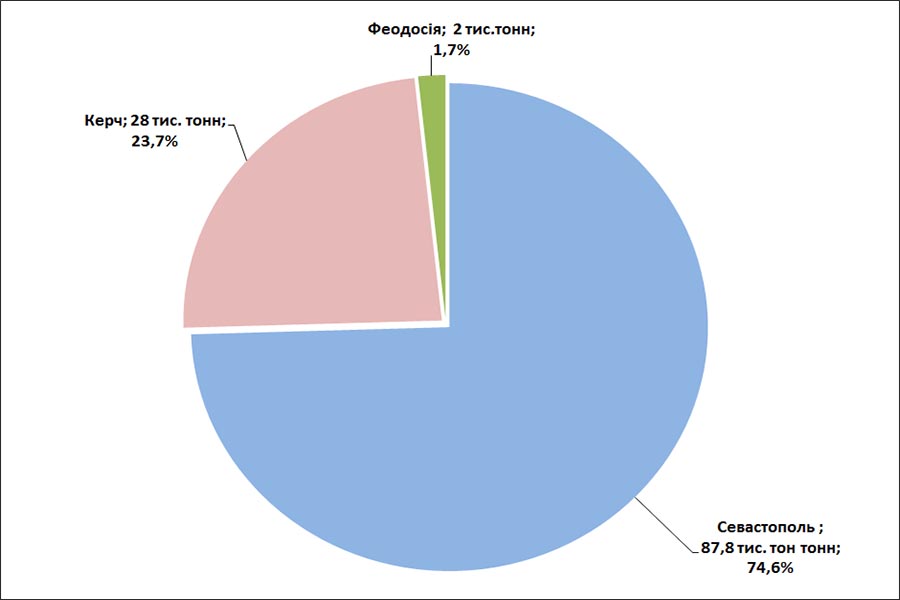 Grain tops the charts of the export cargo from the occupied Crimea by a large margin. Its transportation involved 18 foreign (non-Russian) and 4 Russian vessels. At the same time, the 4 Russian ships transported export grain only to the transshipment areas of the port Kavkaz in the Kerch Strait.

In turn, 73.300 tons of grain was exported from the Sevastopol terminal Avlita that belongs to the SCM group of Ukrainian businessman Renat Akhmetov, which makes for 88.5% of the total volume of Sevastopol exports and 71.3% of the total Crimean port grain exports in November 2017. 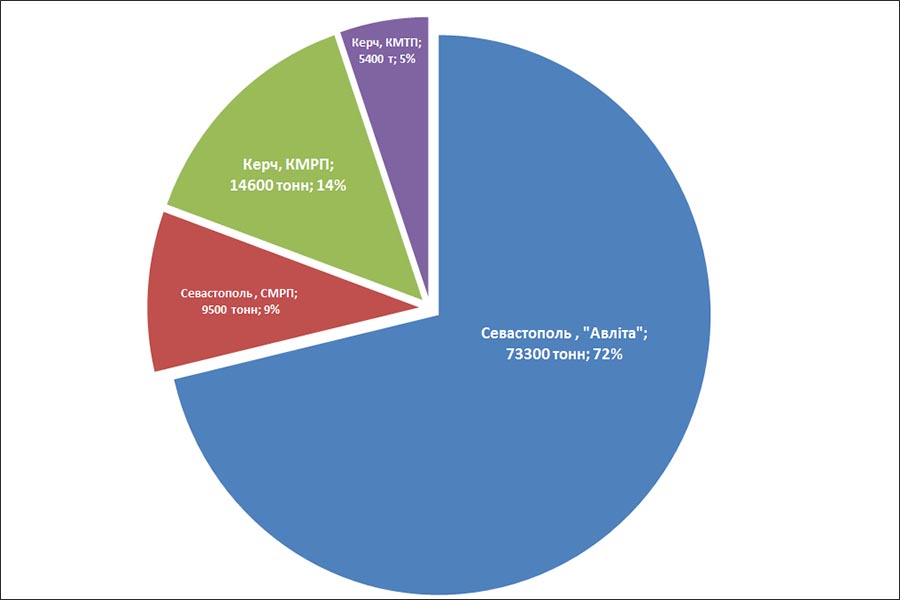 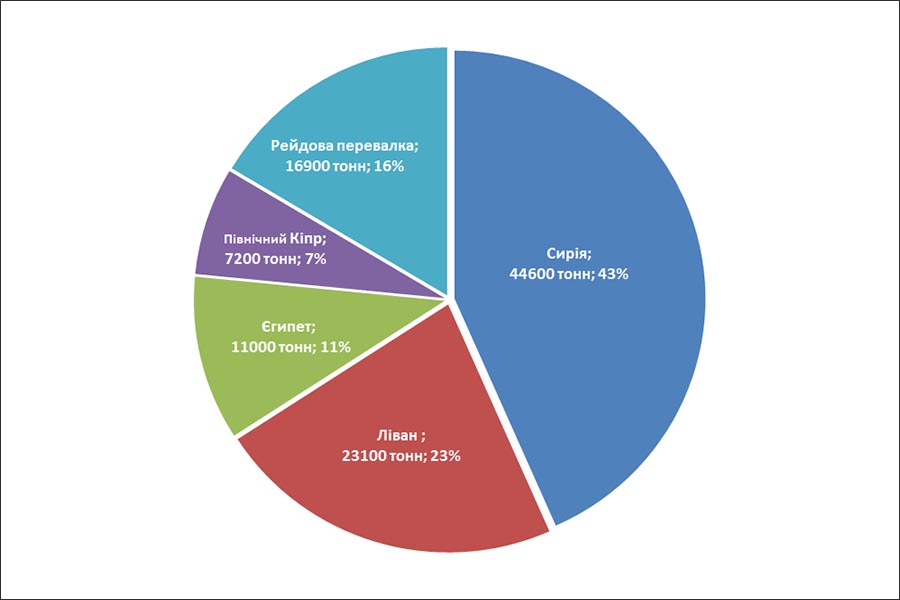 Two foreign vessels made voyages with the export cargo of the Crimean calcined soda. After a long break, two Turkish tanker gas carriers also renewed their voyages. Also, we have recorded 1 export voyage with scrap metal.

The complete list can be found here: November 2017 Export Cargo from the Occupied Crimean Ports