The Illegal Mining of Natural Resources in Crimea. Part 2. The Development of the Stolen Sea

«We have become the owners of immense treasures that we continue to extract»
Alexander Sergeyev, President of the Russian Academy of Sciences

The phrase of the President of the Russian Academy of Sciences, Alexander Sergeyev, used here as the epigraph, actually, has nothing to do with the marine resources of the occupied territory. It was pronounced at the February 8, 2018, meeting of the Presidential Council for Science and Education in Novosibirsk. The statement in fact, referred to the results of the numerous archaeological excavations in Crimea, also illegal. However, it is that sentiment that most accurately characterizes the attitude of the occupying state to the resources of the territory it seized as booty.

Prior to the occupation of Crimea, Russia produced about 30 thousand tons of bio-resources in the Azov-Black Sea basin. That was the combined catch volume of the enterprises in the Krasnodar Territory, the Rostov Region, the Stavropol Territory, the Volgograd Region and the Republic of Adygea.

According to the materials of the Federal Fishery Agency Board meeting on the 2013 results and the 2014 plans, for seven years — from 2007 to 2013 — the catch volume had remain practically stable.

For several months of 2014, the Crimean fisheries had been left without licenses and did not go to sea. But even in that first year of occupation, extremely unsuccessful for business overall, the total volume of Russian production in the Azov-Black Sea basin had significantly grown due to the addition of Crimea.

In the record for Russia 2015-2016 years, the Republic of Crimea accounted for 52.7 and 59.8 thousand tons of fish and shellfish, respectively. The final 2017 yields for Crimea have yet to be published. 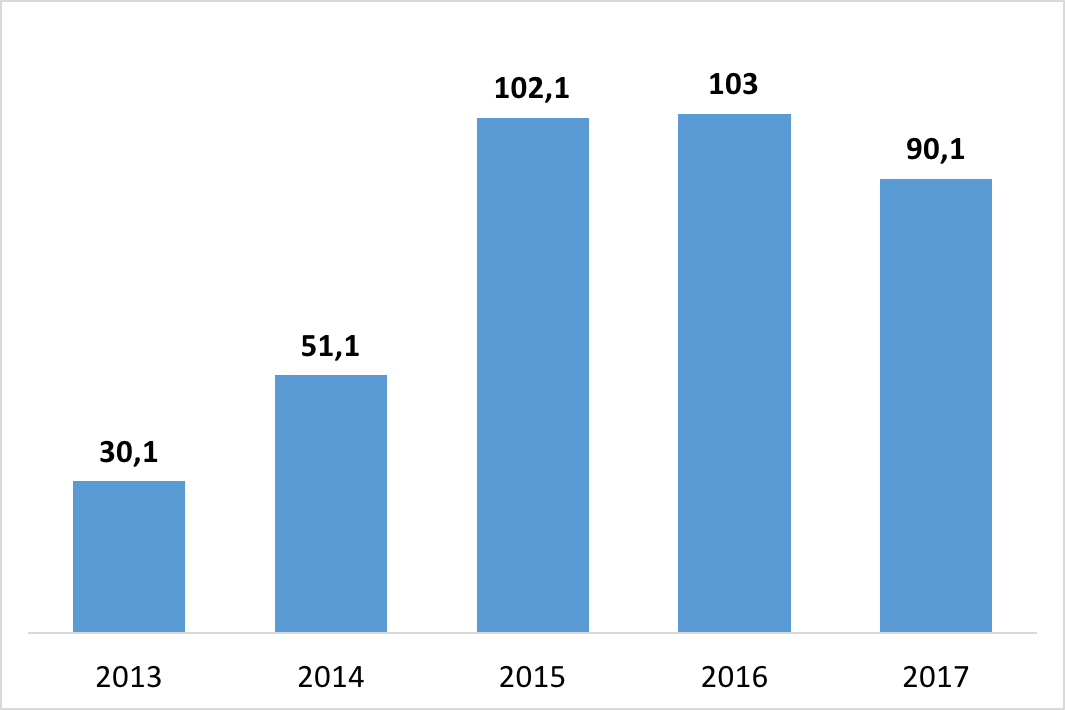 In 2015, the Zvezda TV shared the fishing victories with Russian viewers:

So, the Baltic sprats have lost their appeal. Instead of the imported sprat, local fishermen offer their own, domestic. The multi-ton catch of Crimean fishermen is anxiously expected all over Russia, as the fishermen vouch for their products’ quality."

As reported on the Russian Federal Agency for Fisheries website, the number of fishing companies harvesting the Crimean aquatic bio-resources has more than tripled since «the accession of the peninsula to Russia.»

The Azov-Black Sea territorial administration of Rosrybolovstvo explains that trend with the «specifics of the tax and licensing policy.» 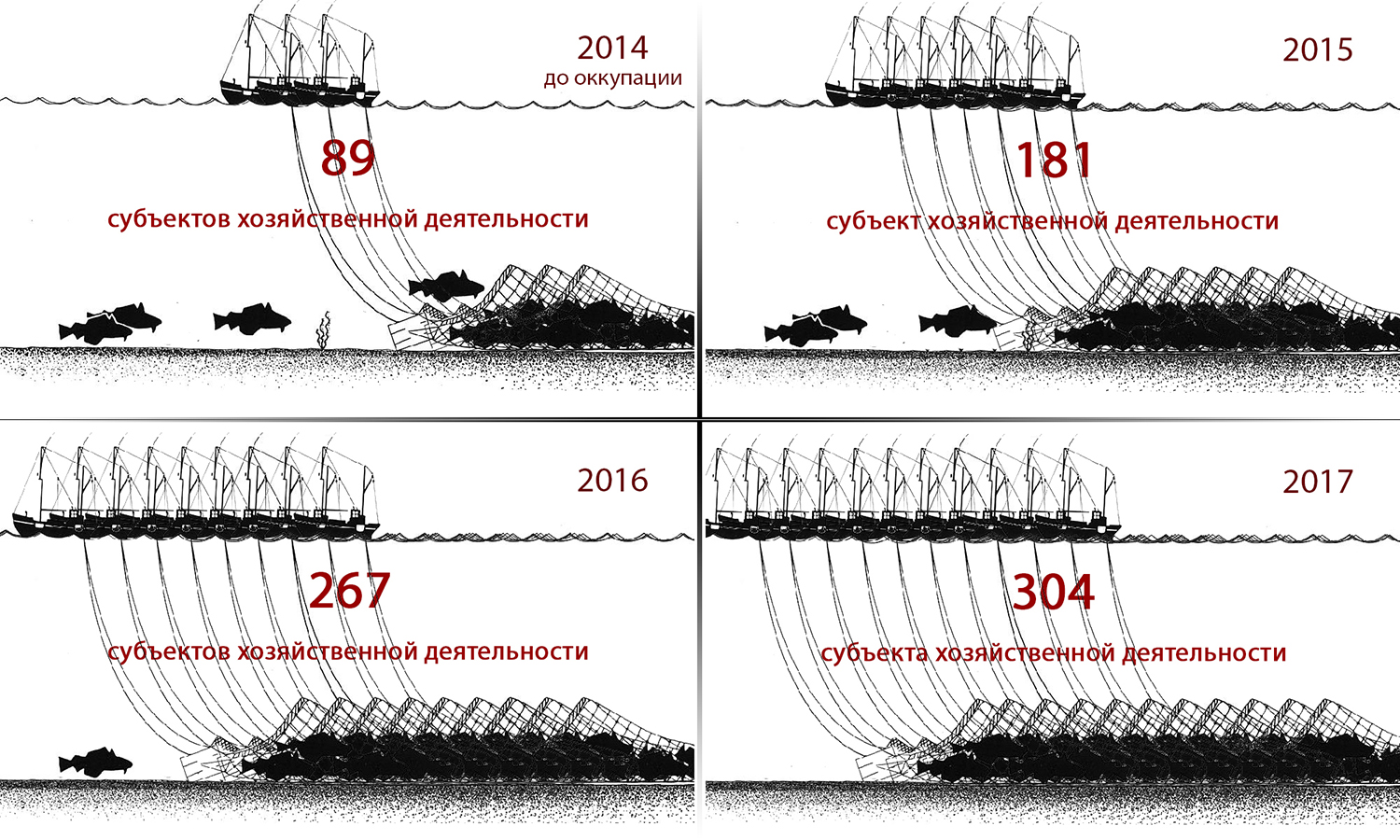 Prior to the annexation, the Crimean fishing industry included 89 fishing enterprises that used 42 registered fleet vessels and about 300 small fleet units, as well as 27 aquaculture enterprises specializing in the cultivation and sale of both freshwater fish and sea mollusks.

As reported by the head of the Azov-Black Sea territorial department of the Federal Agency for Fisheries, "as of April 1, 2015, 32 medium-tonnage fishing vessels have been granted the right to fly the Russian Federation flag and the ownership of the Russian-designed vessels". Regarding the small-sized vessels, as of that date, there had been 197, or 65% of the total number, registered in the State Registry of the Russian Federation.

As of that same date, Rosrybolovstvo had issued 269 permits to 90 fishing enterprises and individual entrepreneurs of the Crimean Federal District.

In August 2016, the occupation authorities reported the almost completion of the fishing fleet re-registration process — 38 fishing vessels had now been registered under the Russian flag.

For instance, a glance review of the list of those who have obtained the fishing permits shows that the Simferopol Crimea-Resource, LLC had been established in January 2015 by the Mongoost, LC from the Russian city of Kurgan, while the LLC with the loud title The Great Crimea had been founded in July 2015 by the two Chechnya residents…

In 1991, the Sea of ​​Azov had 17 species of commercial fish. Today, according to the State Environmental Inspection of the Ministry of Natural Resources of Ukraine, there are three left — anchovy, goby and redlip mullet. Over the past decade, in the Sea of ​​Azov, the volume of the redlip mullet fishing has dropped almost in half, of the pike-perch — three times, and Kalkan flounder — four times. According to the inspection, the main reasons are the poor management of the fishing industry and inappropriate protection of aquatic resources.

Ecologists say that until recently, fish stock seemed almost inexhaustible, but today the death of the Azov Sea looks inevitable because of the continuing barbaric destruction of fish.

Of the 26 aquatic species previously harvested in the Black Sea basin, currently, there are only six left in commercial quantities. That was announced in October 2017 by Natalia Milchakova, Co-Chairman of the Committee on Bio-resources of the International Mediterranean Scientific Commission, head of the Phyto-resource Laboratory of the Kovalevsky Institute of Marine Biological Research. According to the Russian expert, «overextension of biological resources leads to the situation when the resource disappears altogether».

In September 2017, at a Kerch administration meeting, it was reported that the amount of anchovy in the Crimean waters had dropped to 68-100 thousand tons. Notably, the 60 thousand ton mark is considered extremely dangerous as at that stage the species is considered depressed.

Admittedly, the problem of the dangerous fish decline in the Black Sea and particularly, the Sea of ​​Azov, is not new. These trends, as well as the regions’ environmental problems in general, have been developing for several decades.

However, after the Russian occupation of Crimea, the prospects for solving the problems of the Black and Azov Seas bio-resource depletion have become even more illusive.

After four years, it has become quite obvious that the Russian Federation treats not only the Crimean fishing industry, but the peninsula in general, as its military booty that can be used up without any thought about the future generations. The Russian Federation not only strives to squeeze all it can out of the area’s natural resources, but also causes irreparable damage to the ecology of the peninsula and its marine zone.

The intensive development of the military base that Russia has established in Crimea, has considerably worsened the pollution of the Black Sea, especially in the Crimean coastal waters. Additional risks have been created by the restoration and development in the occupied territory of the nuclear weapons deployment and storage facilities.

But even the supposedly "peaceful" projects of the occupiers, such as the constructing of the Kerch Strait bridge, the Tavrida freeway and the like cause no less damage than the military ones… 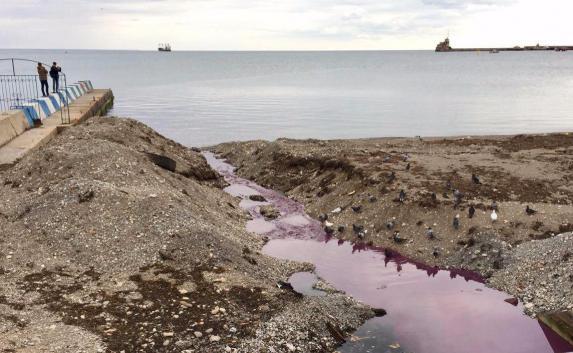 Photo: In Feodosia, a purple-colored stream from the coastal area flows into the Black Sea.