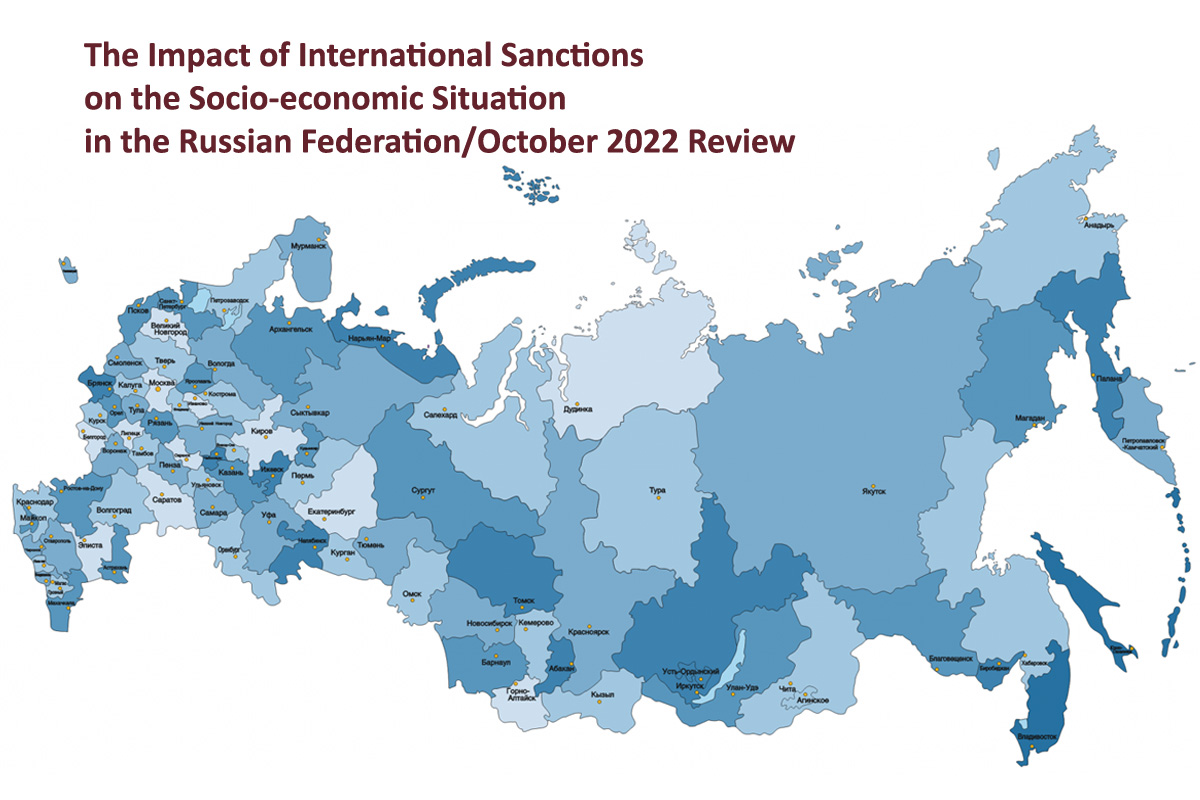 From the very beginning of the large-scale war on February 24, 2022, the Russian Federation took drastic measures to restrict any online information about the impact of sanctions on the Russian economy. The measures included both restriction of access to all Russian websites from Ukraine and the West, and shutting down the websites of industries and enterprises that had fallen under the sanctions. In addition, even the little information published has been heavily censored, and more often than not, contains distorted economic numbers.

The current review has been prepared on the basis of our own monitoring of mainly Russian economic sources, including the statements of the country’s well-known economists and analysts. In an attempt not to create additional hardship for them and their relatives residing in Russia, we purposely don’t provide hyperlinks or footnotes to the Russian sources. However, the BSN editorial office has those at our disposal.

And it is ready to do via the surviving branch of Nord Stream-2, via the much-hated Ukraine, along the bottom of the Black Sea via Turkey and even as liquefied gas — by hook or by crook, since it has no real alternative to the European market.

Thus, the Russian Federation has almost 2 months to either try forcing the West to amend those decisions, easing the oil embargo, or find alternative markets.

As for the latter, our monitoring data of Russia’s marine oil and petroleum products exports from the Black and Azov Sea ports indicates that over April-October 2022, neither their volumes nor the geography have changed significantly. While several new destinations, such as Sri Lanka, Bahamas, St Lucia, Tunisia and Oman have joined the route map, for now, they remain minor «test batches.»

In other words, while Russia clearly does make attempts to reorient its marine oil exports, so far, it has virtually no success.

If the Kremlin fails to squeeze out the easing of the oil embargo from the West, then, based on the Russian economists’ forecasts, the consequences for the RF will include:

There seems to be a widespread understanding among Russian industrialists and entrepreneurs that industrial import substitution would require at least several years needed to build the appropriate manufacturing production capacities.

In fact, in the current Russian realities, the term «import substitution» takes on an entirely different meaning — that of smuggling the Western equipment, spare parts and components in violation of not just the sanctions regime, but also, of copyright. Hence, the newly coined Russian term «a parallel import.»

According to the Central Bank of the Russian Federation, between February 19 and July 2022, Russian banks restructured the clients’ loans for the total of 319.5 trillion rubles.

88% of these loans, or 8.4 trillion rubles, are loans to business that had ceased to service them on the original terms. 19% of loans to large enterprises and 10% — to small enterprises fell subject to restructuring. In other words, as expected, large business suffers twice as often as small one.

These figures mark the dramatic 40% increase in prospective debt defaults even compared to those of the COVID pandemic, as only 16% of the credit organizations’ portfolio totaling 6.1 trillion rubles were restructured then.

Its Central Bank, however, doesn’t disclose exactly how many irrecoverable debts have already accumulated in the banking system — all we know is that as of February 1, corporate loans totaling 2.95 trillion rubles were «in arrears.» Since then, the Central Bank has made the data classified.

According to Rosstat, by the end of May 2022, 5.6 thousand Russian organizations had overdue loan payables of 4.097 trillion rubles. Since the beginning of the year, business debt to suppliers has increased by 302 billion rubles, totaling 2.594 trillion. The amount of overdue tax debts to the budgets of all levels had almost doubled — from 42.7 to 83.4 billion rubles.

Obviously, a number of companies, such as airlines, hotels, rental and tourism businesses, have been having problems since the pandemic.

But now they are joined by many more problematic borrowers, since: Russian automobile industry has practically come to a halt, metallurgy has fallen by 22%, and lumbering, wood industries and gold mining have been left without the sales markets. At the same time, shopping malls have lost foreign retailers, three-quarters of whom have either suspended business or left Russia entirely.

Experts are skeptical about the prospects of the Russian-Chinese cooperation that Russia has been so much counting on. That included the import replacement plans for the military sphere, in particular, microelectronics. At present, the most influential experts believe that those calculations haven’t materialized.

In a Shanghai University of Finance and Economics study Multinationals, Global Value Chains, and the Welfare Impacts of Economic Sanctions, Xiayi Du and Zi Wang concluded that economic sanctions that broke ties between Russia and other economies, except for China, will reduce Russian real income by 11.98%. At the same time, their impact on the welfare of the population of the Western countries that introduced them turned out to be less than 1%.

The reasons for the sharp drop are: first of all, their freezing by Western sanctions, and secondly, huge reserve expenditures to finance the war.

Six days before the start of the war, Russia's international reserves amounted to 643.2 billion dollars. Since then, they have declined by $102.5 billion, or 16 percent. But the official estimate includes about $300 billion frozen by Western sanctions, which Russia now has no access to. It turns out that shortly after the start of the war, Russia had liquid reserves of only $343 billion. So, taking into account the further 102.5 billion reduction, the Kremlin now has only 240 billion dollars at its disposal — the de-facto 30% drop.

The 102.5 billion reduction is close to the Kremlin's conservative estimates of military spending. In other words, had the West not frozen 300 billion dollars at the start of the war, given the average monthly rate of the reserves drop, Putin would have had enough money to finance 47 months, or 4 years of war. But thanks to the sanctions, in February, the Kremlin had enough liquid reserves for a little more than two years, and by September — only 17-18 months of the military campaign. In addition, a part of the reserves is denominated in SDRs (special drawing rights) and is also in the account of Russia's reserve position in the IMF, making the liquidity of that part of the reserves limited. Also, 130 billion dollars of the reserves are gold, the use of which is also sanctioned. So, the currently remaining reserves are sufficient for no more than 1 year of war — roughly until September 2023.

And that is precisely why Putin wants to end the war as soon as possible. The recent escalation launched by the Kremlin is merely meant to raise the stakes in order to have the upper hand in negotiations Putin hopes for. He needs to intimidate Ukraine, Europe and the US in order to reach settlement through negotiations and legalize the territories that the Russian Federation has occupied since February 24, 2022.