In late June 2018, Ukrainian think tanks the Maidan of Foreign Affairs and the Institute for Strategic Black Sea Studies, together with the BlackSeaNews online portal appealed to the EU High Representative for Foreign Affairs and Security Policy Federika Mogherini with the proposal to enact new sanctions in regard to the occupation and annexation of Crimea.

The proposals were first made public at the June 21, 2018, UNIAN press conference. 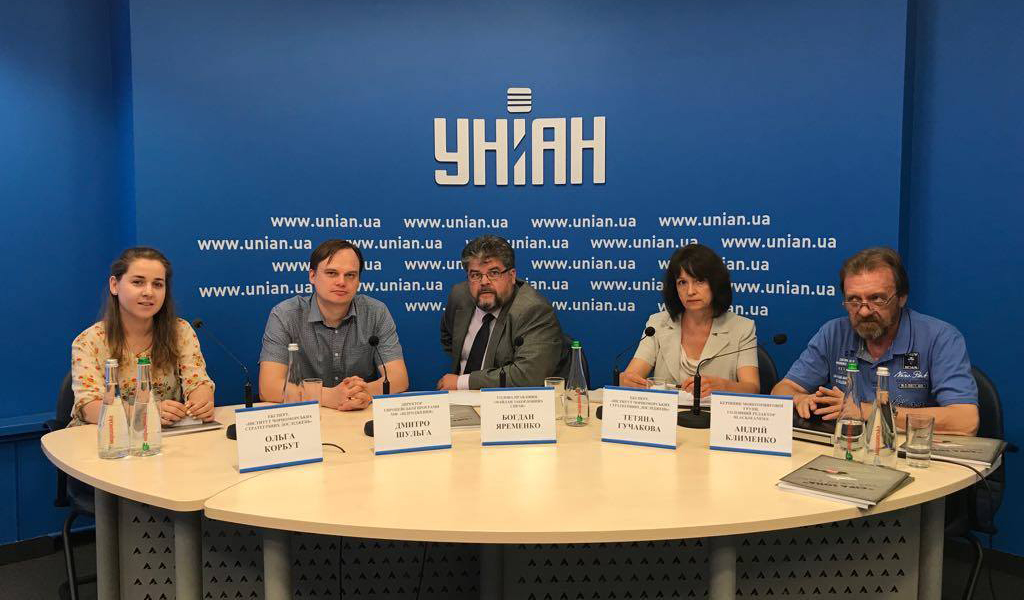 The appeal states that:

«... Despite the international non-recognition, the illegal occupation of Crimea has entered its 5th year and the Russian occupation authorities has been stepping up its attack on the human rights there. The number of political prisoners in the Crimea keeps growing and there is no freedom of speech as the Russian authorities criminalize any public denial of the annexation’s legality. Russia ignores the decision of the International Court to reinstate the Mejlis of the Crimean Tatar people.

It also ignores Ukraine's protests against the illegal construction of the Kerch Bridge that has an important strategic and military significance for occupants. The peninsula has been militarized and transformed into a base for further aggression and interventions in the Black Sea-Mediterranean region. In particular, the territory of Crimea is actively used to strengthen and supply the Russian military contingent in Syria and the forces of the Assad regime that continue crimes against the peaceful population of Syria».

Since April 2014, the Ukrainian civil organizations the Maidan of Foreign Affairs, the Institute of Strategic Black Sea Studies and the BlackSeaNews online portal have been jointly monitoring violations of the EU, US and other states’ sanctions in regard to the Crimea occupation. We have been closely following the situation in the areas of:

1) militarization of Crimea and the use of Ukrainian enterprises expropriated by the Russian Federation; 2) illegal crossings of the Ukrainian border in the occupied peninsula by air and sea vessels and 3) prohibited exports and imports to/from the EU countries.

We appreciate the introduction of restrictive measures by the European Union and clearly see their effectiveness. At the same time, the Russian Federation does not only regularly violate the sanctions, but also regularly develops schemes to bypass them, often involving European businesses into the process.

At present, we believe the sanctions must be expanded to several Russian enterprises that so far, have managed to stay off the black list. Specifically: 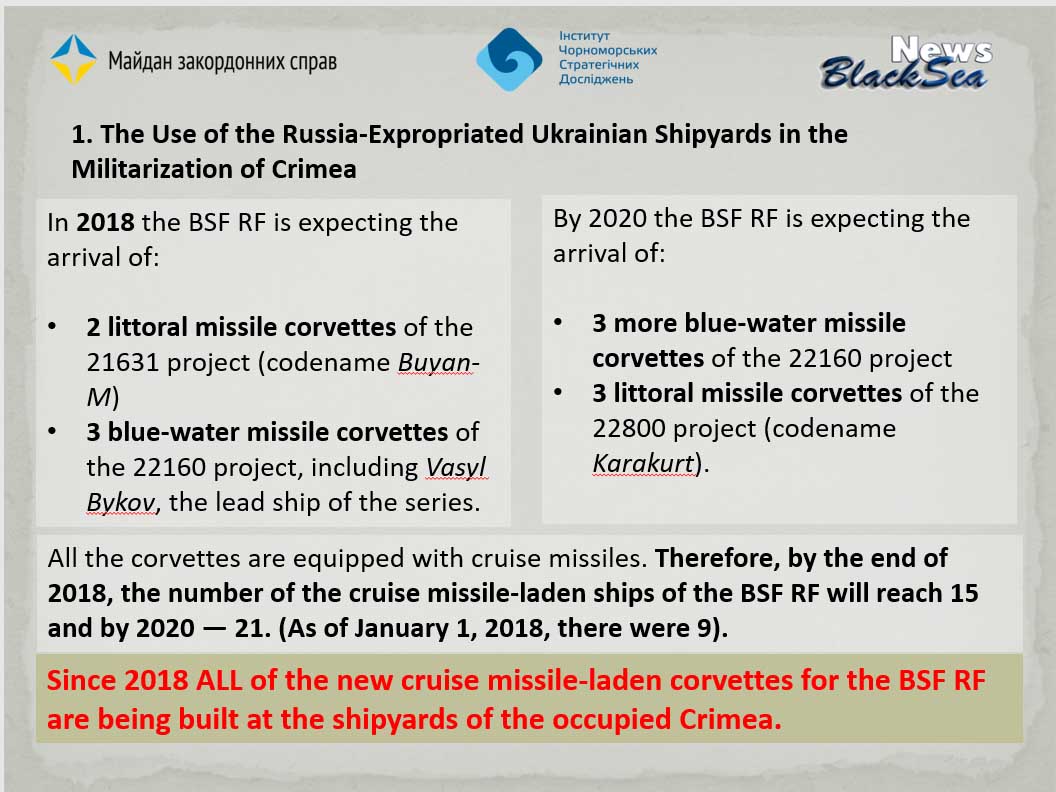 2. The Kavkaz port on the Russian side of the Kerch Strait (the Kavkaz branch of the Administration of the Azov Sea Ports state enterprise, Chushka, Temryuk district, Krasnodar region, Russia) that facilitates the Crimea Bridge construction and all cargo to Crimea, including military one. In addition, it is being effectively used to circumvent the EU sanctions against the Crimean ports. 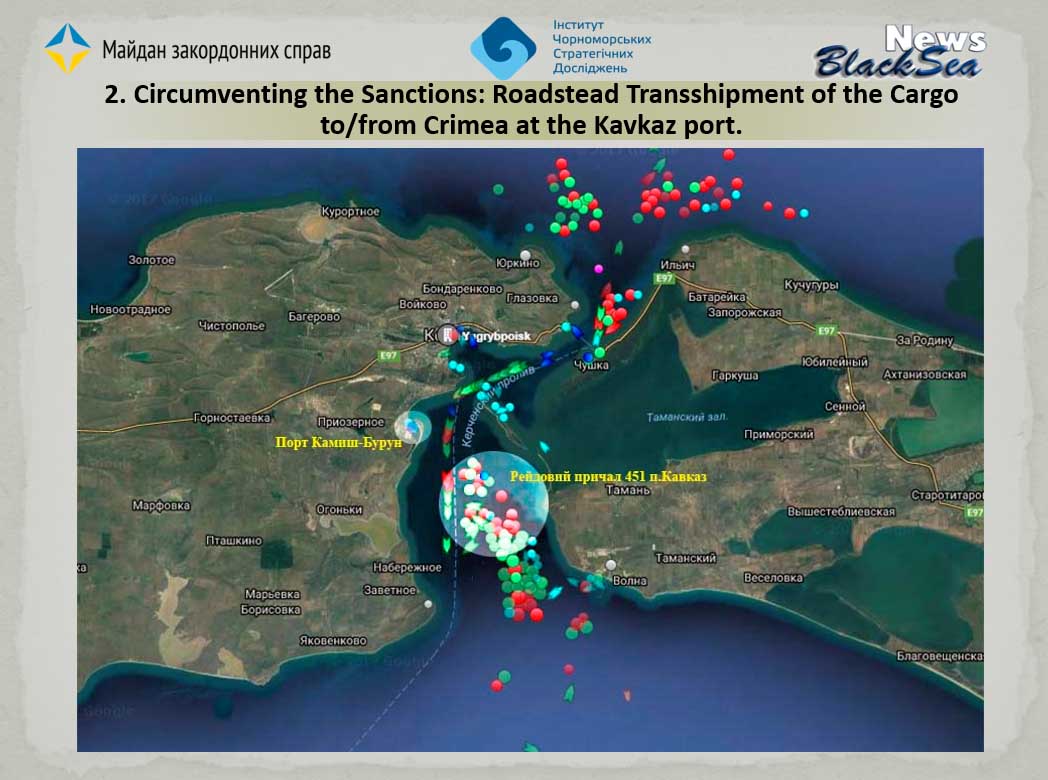 The port employs the following scheme to circumvent the sanctions: imported foreign cargo (including the critically needed EU raw materials for the titan production) de-facto destined for Crimea, instead, arrives to the Kavkaz port, where on a Kerch Strait roadstead it is reloaded onto the vessels that then proceed to Crimea. The same scheme is used for shipping Crimean exports, such as grain and calcined soda.

Therefore, to maintain the effectiveness of the EU sanctions against the Crimean ports, they must be expanded to Kavkaz port.

3. The aircrafts of the nine Russian airlines, of the 21 that flew to the occupied Crimea in 2017, then also flew to the airports of the 26 EU countries. Over 2017, we have registered 164 such aircrafts. We call on the EU to implement measures so that these perpetrators could not be serviced at the EU airports. 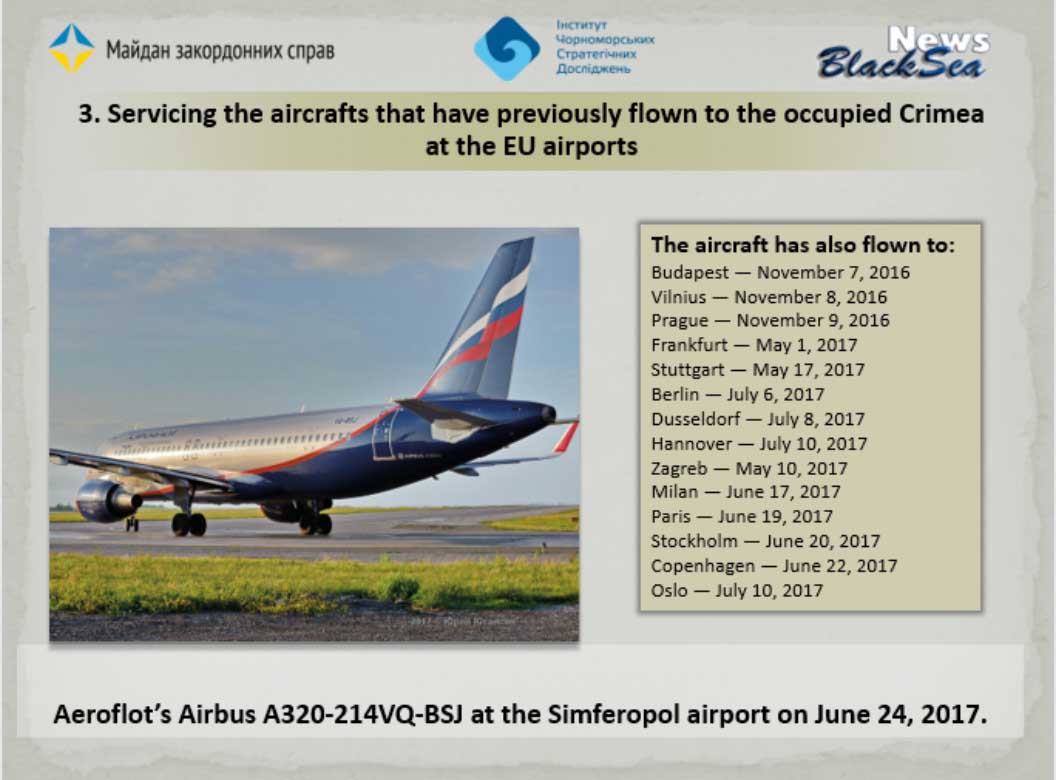 In view of the upcoming July 9, 2018 EU-Ukraine Summit in Brussels, we are looking forward to the EU institutions taking further steps towards ensuring the sanctions effectiveness and their expansion. We also believe it would be expedient if the EU officially warns European businessmen that participating in schemes to circumvent international sanctions entails legal responsibility.

Details are provided in the attached Aide-mémoire.

The appeal has been signed by:

The present Aide-mémoire details the facts that call for the expansion of the current US sanctions against Russia in relation to the occupation of Crimea. The facts have been the result of the ongoing joint monitoring by the Maidan of Foreign Affairs, the Black Sea Institute of Strategic Studies and the BlackSeaNews online portal.

1. Using the expropriated Ukrainian shipyards for the militarization of Crimea. 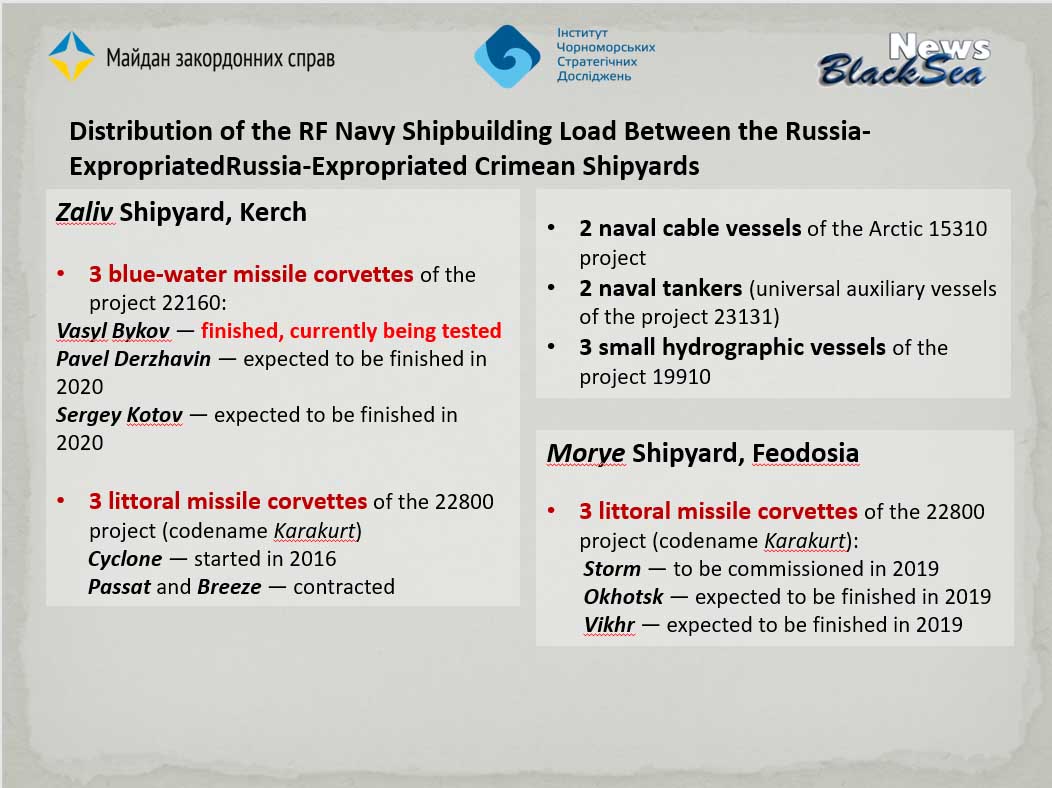 1.1. The VAT Leningrad Shipyard “Pella” has first become a “curator” and then a “leaseholder” of the Morye shipyard in Feodosia owned by the State of Ukraine that after the occupation of Crimea, has been seized, expropriated and “transferred” to the federal ownership of the RF.

Currently, the shipyard is building three new project 22800 far sea missile corvettes (codename Karakurt). Even before the official lease of Morye, on May 10, 2016, the Pella shipyard started building Storm, the first of a series of 3 missile corvettes of the new project 22800 for the Black Sea Fleet of the Russian Federation, as part of the Russian state defense contract. The vessel is scheduled to be put to sea in 2019. 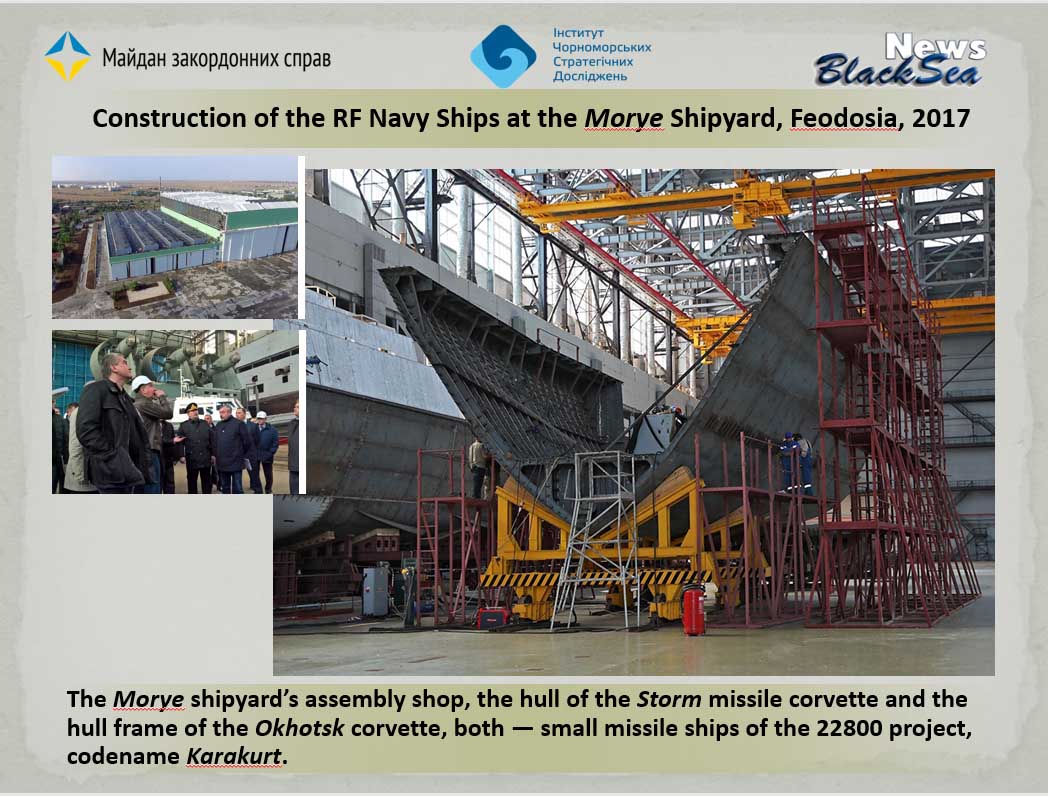 A missile corvette of that type equipped with 8 cruise Caliber-NK missiles is being actively used by Russia’s Black Sea Fleet and the Caspian Flotilla to shell objects in Syria at the range of up to 2500 km. In addition, it has the latest anti-aircraft missile and gun complex Pantsyr-M. It should be noted that since March 10, 2014, the Pella shipyard has been owned by Germany’s J. J. Sietas Shipyard through a subsidiary Pella Sietas GmbH, Neuenfelder Fährdeich 88, 21129 Hamburg, www.pellasietas.com.

1.2. JSC Zelenodolsk Plant named after A.M. Gorky (Zelenodolsk, Tatarstan, Russia). A few months after the occupation of Crimea, in August 2014, with the support of the peninsula’s occupying authority, the company carried out a takeover raid of the JSC Kerch Shipyard Zaliv, the property of the Ukrainian shareholders, and re-registered it as LLC Shipbuilding Plant Zaliv with all the assets transferred to the latter.

As of June 1, 2018, as part of its state defense contract, the Zelenodolsk Plant is building the following vessels for the Russian Black Sea Fleet at the Zaliv shipyard:

The main ship of this project, Vasily Bykov, has been completed and on March 25, 2018, headed from Kerch to Novorossiysk for state testing;

missile corvette Pavel Derzhavin started on February 18, 2016, currently under construction, anticipated to be put to sea in 2019, completion of construction scheduled for 2020;

The missile corvettes of that type project have 8 Caliber-NK cruise missiles each.

Corvette Cyclone has been started in the summer of 2016; for corvettes Passat and Breeze the contracts have been signed. 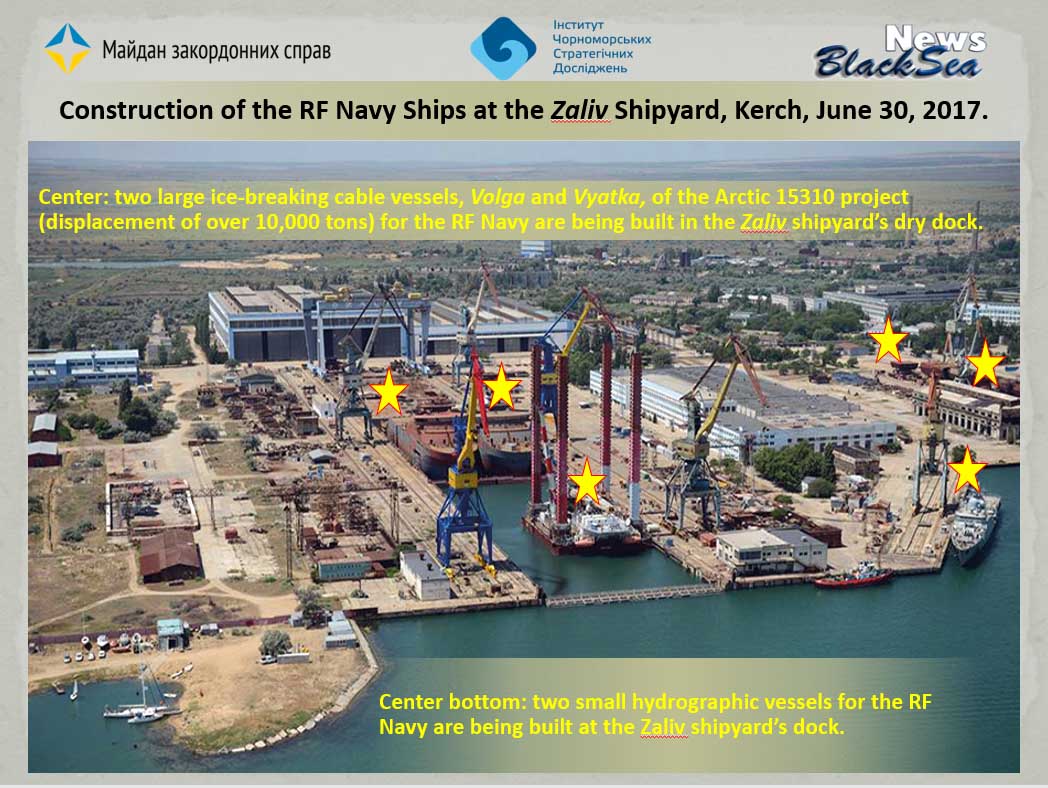 Simultaneously, two cable vessels of the project 15310, Volga and Vyatka, for the Black Sea Fleet of the Russian Federation are now being constructed. Those are large vessels with a deadweight of 8,000 tons, a length of 140 meters and a width of 19 meters, whose purpose is to listen to or damage international submarine communication cables in the Arctic waters.

Thus, in the coming years, the two above-mentioned Russian companies will build at least 9 missile corvettes at the seized Crimean shipyards with the total number of 72 Caliber-N cruise missiles on board. Also, that means that in 2018, Russia will acquire the capability to replenish its Black Sea Fleet with the new ships built right in the occupied Crimea. All that poses a threat not only to Ukraine, but also to practically all EU states.

With that, we must point out that at 364 meters long and 60 meters wide, Zaliv has one of the largest shipbuilding docks in Europe that has no analogs in the RF. Therefore, we anticipate that its use for the needs of the Russian military will continue growing.

Sanctions proposal: to block all assets and ban US businesses from any collaboration with the VAT Leningrad Shipyard “Pella” and JSC Zelenodolsk Plant named after A.M. Gorky.

The Kavkaz port on the Russian side of the Kerch Strait (the Kavkaz branch of the Administration of the Azov Sea Ports state enterprise, Chushka, Temryuk district, Krasnodar region, Russia) facilitates the Crimea Bridge construction and all cargo to Crimea, including military one. The port operates 19 regular ferries to the occupied Crimea.

The port has been using the following scheme to circumvent the sanctions: imported foreign cargo (including the critically needed EU raw materials for the titan production) de-facto destined for Crimea, instead, arrives to the Kavkaz port, where on a Kerch Strait roadstead it is reloaded onto the vessels that then proceed to Crimea. 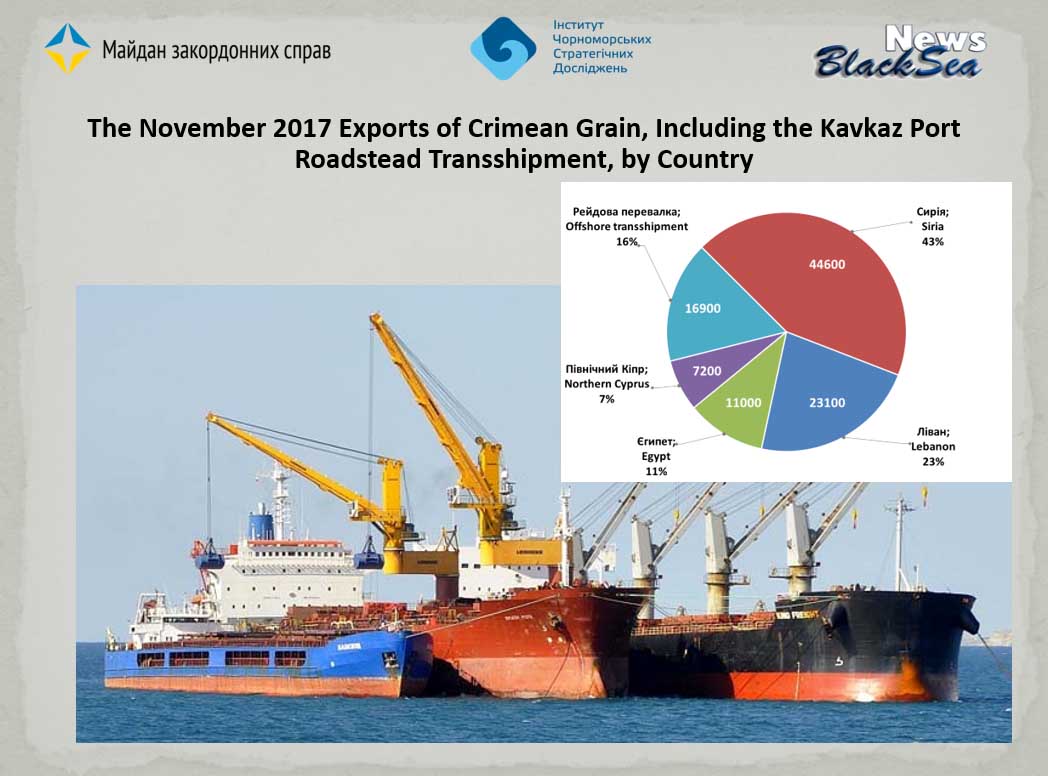 The same scheme is used for shipping Crimean exports, such as grain and calcined soda.

The shipping of ilmenite - the raw material for the production of titanium - to the Kerch port of Kamysh-Burun continues on a monthly basis. The ilmenite ore is being used by the single buyer in the occupied peninsula — the Titan plant in Armyansk, in the north of Crimea, that is part of the corporate group owned by Dmytro Firtash.

Over 2017, we have registered the sanctions circumventing schemes of transporting ilmenite ore from Brazil, and the largest shipment – from the Turkish port of Samsun. Usually, the ilmenite was brought to the Kavkaz port’s roadstead #451 in the Kerch Strait where it was reloaded onto the Russian vessels that delivered the cargo to Kamysh- Burun. But in November 2017, the scheme has somewhat evolved.

On November 23, 2017, a German cargo ship HHL MISSISSIPPI (IMO: 9435765) arrived from the Romanian Constanta under the flag of Liberia to the roadstead of the Russian Port Kavkaz in the Kerch Strait (the same roadstead 451) and remained there until December 5, 2017. Over that period, for at least three times, an old Russian cargo ship NEFTERUDOVOZ-2 (IMO: 8986884) approached it and the HHL MISSISSIPPI onboard cranes loaded ilmenite to the NEFTERUDOVOZ-2 holds. After that, the Russian ship delivered ilmenite to the Kerch port of Kamysh-Burun. 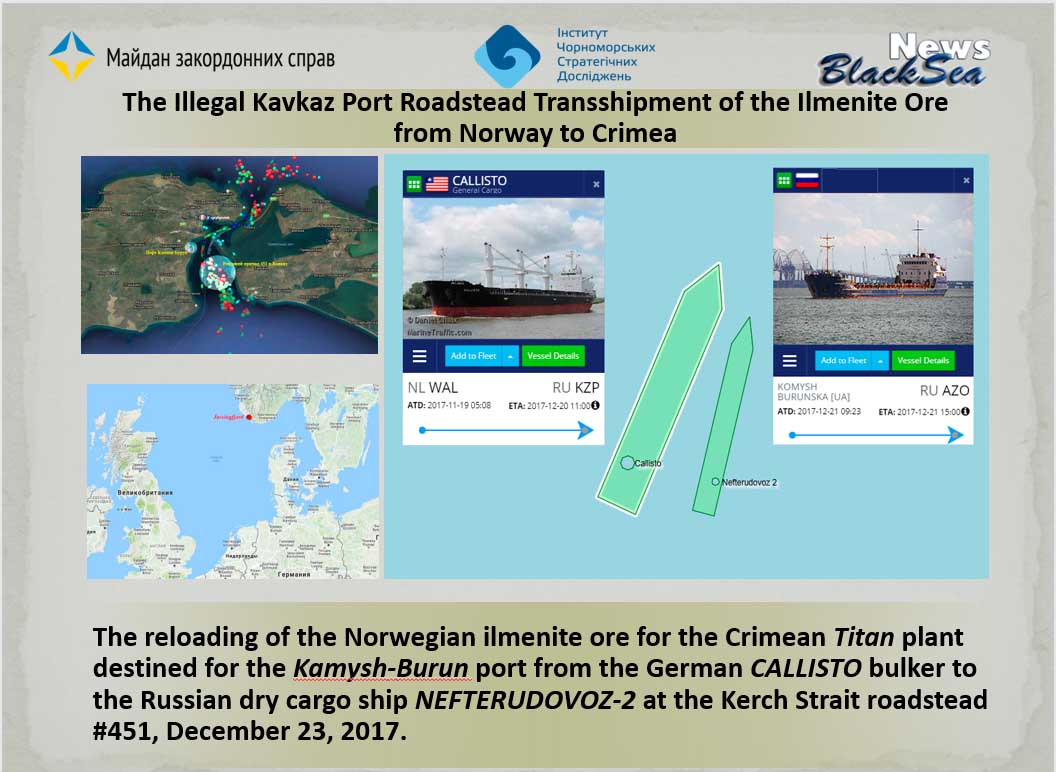 Earlier, On November 2, 2017, HHL MISSISSIPPI left the port of Bremen and on November 3 arrived at the small Norwegian port of Jøssingfjord, the site one of the largest in Norwegian and one of the largest in Western Europe titanium mines Tellnes. The mine is run by Titania, while the fjord is used as the company’s port. It was there that between November 3-6, 2017, HHL MISSISSIPPI accepted a cargo of 10,000 tons of ilmenite ore for the occupied Crimea.

Thus, the reputable companies from Germany and Norway have been involved in the illegal scheme of the export supplies to the occupied Crimea. It was the first time that Norway was caught supplying ilmenite to the occupied peninsula. Earlier, similar schemes from the Ukrainian port Pivdennyi, Brazil and the largest one - from the Turkish port Samsun – had been recorded.

As we found out, that has marked the start of a new scheme of bypassing the sanctions.

on December 20, 2017, the German bulk carrier CALLISTO (IMO: 9427392) arrived under the flag of Liberia from the Norwegian Jøssingfjord port to the port Kavkaz's roadstead #451 in the Kerch Strait with the double deadweight carrying up to 25 thousand tons of ilmenite ore for the Crimean Titan plant. The CALLISTO bulk carrier (IMO: 9427392) belongs to HEINZ CORLEIS REEDEREI KG Kampweg 4A, 21706 Drochtersen, Germany.

Sanctions proposal: to block all assets and ban US businesses from any collaboration with port Kavkaz, including an explicit ban on shipping and receiving any cargo to/from that port by seafaring vessels.

3. Servicing at the US airports any aircrafts that have previously flown to the occupied Crimea 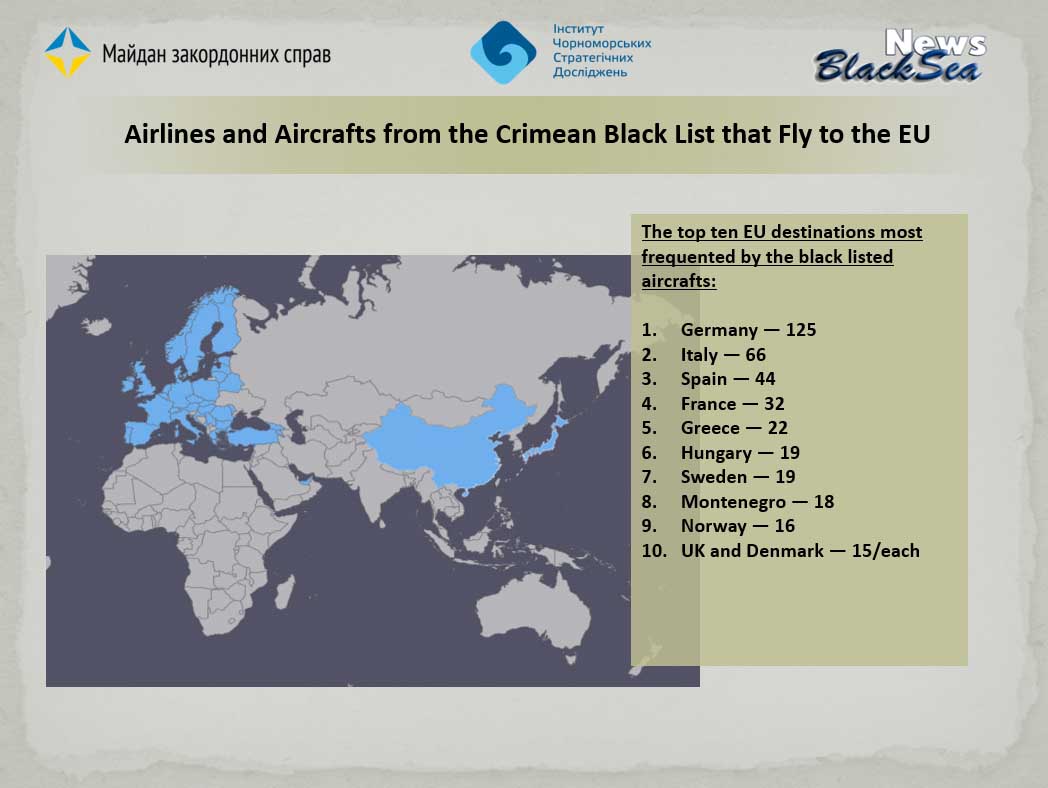 The nine Russian airlines whose aircrafts had flown to the occupied Crimea in 2017, then also flew to the US airports. Over 2017, we have registered 164 such aircrafts that have flown to:

(For details, see Databаse of Airplanes that Flew to the Occupied Crimea and EU Member-States, USA and Other Destinations in 2017 in the Appendix).

Sanctions proposal: Ban the service of Russian aircrafts that have flown to and from the Simferopol airport at the US airports.

This Aide-Mémoire is also being forwarded to the diplomatic missions of the EU countries, as well as to the Ukrainian state authorities. 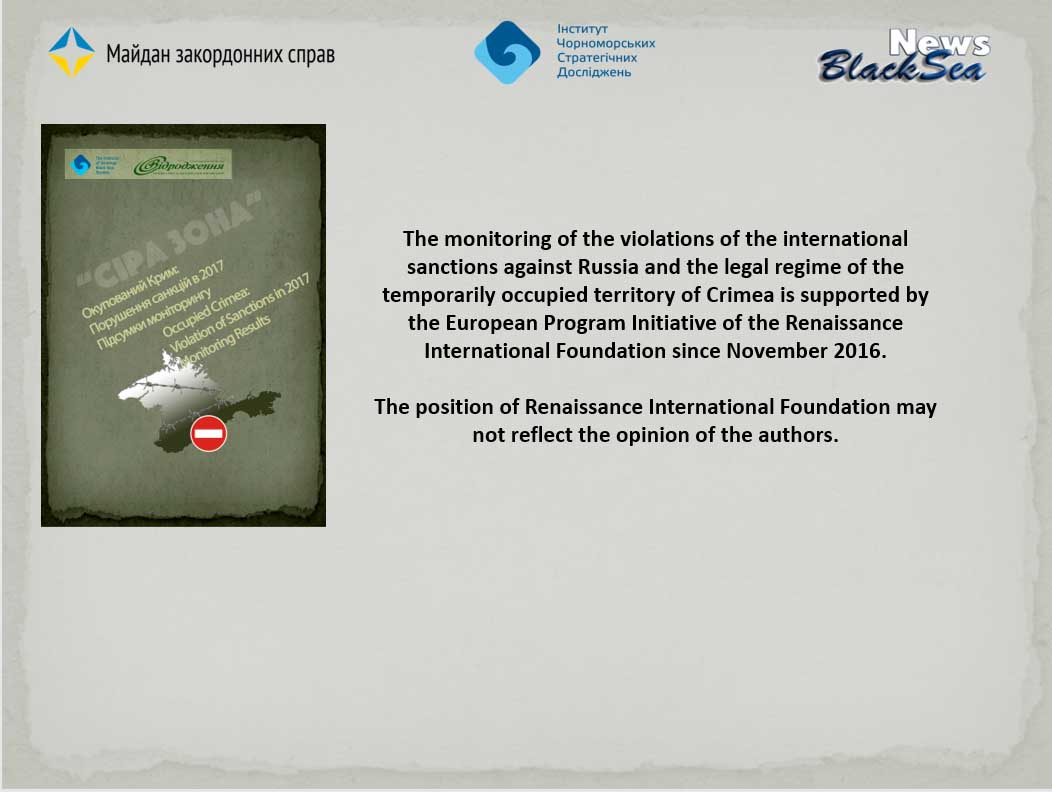