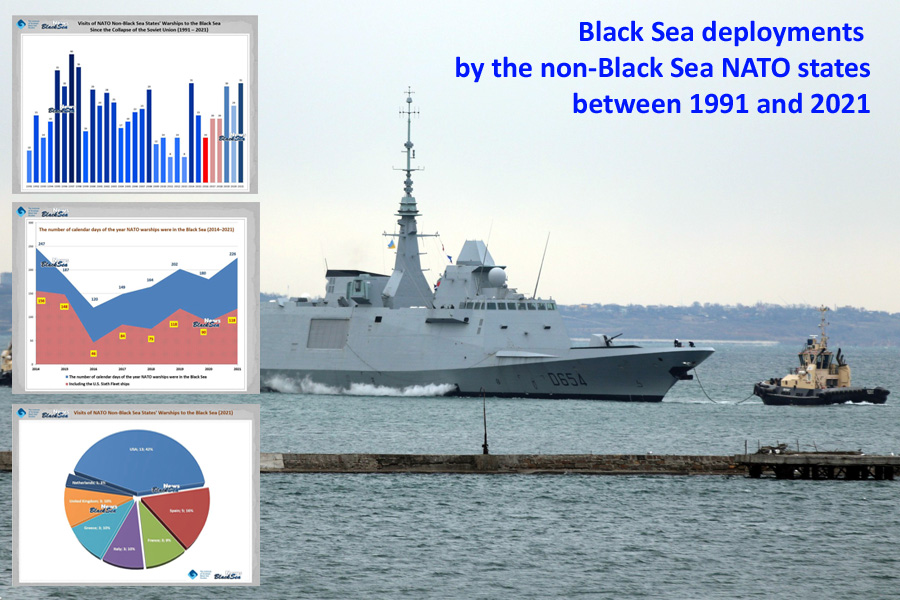 According to the Monitoring Group’s data, as of January 25, 2022, in 2022, only one non-Black Sea NATO state warship stayed in the Black Sea, namely:

Overall, such «Christmas breaks» in the non-Black Sea NATO navies deployments to the region is fairly typical. For instance, between 2014-2020, those occurred only in early 2015 and 2019. This year, the French Navy missile frigate FS Auvergne (D654) ended its stay in the Black Sea on January 2, 2022.

That is, at the time when the Russian military threat to Ukraine has dramatically escalated in January 2022, warships of the non-Black Sea NATO have been absent in the Black Sea for 21 days, obviously increasing the risk of aggression from the sea over the holidays.

For reference: NATO warship Black Sea deployments during the Christmas holidays in 2014-2020

In 2021, 31 ships from the non-Black Sea NATO states have been deployed to the Black Sea — the largest number over the period of Russian occupation of Crimea.

Note, that even though the 2021 numbers equal the 2014, the difference is that in February 2014 (beginning on February 5) the US 6th Fleet flagship Mount Whitney (LLC 20) and the Oliver Hazard Perry-class frigate USS Taylor (FFG-50) stayed in the Black Sea to provide emergency assistance, i.e., evacuation of American athletes in the event of terrorist attacks, during the Sochi Olympics.

On February 24, 2014, in accordance with the Montreux Convention, the USS Mount Whitney left the Black Sea. The frigate Taylor remained in the Black Sea until March 7, 2014, i.e., contrary to the Montreux Convention, for more than 21 days, due to the accidental propeller damage upon entry to the Samsun Turkish Naval Base for refueling on February 12. Note that in 2004, like most Oliver Hazard Perry-class frigates, USS Taylor was stripped of the guided missiles due to obsolescence, retaining only its artillery and torpedos.

The regular NATO warship presence in the Black Sea directly related to the Russian aggression against Ukraine began on March 7, 2014, with the Arleigh Burke missile destroyer Truxtun (DDG 103).

As in previous years, most of NATO's non-Black Sea warship deployments to the Black Sea in 2021 — 13 out of 31 — were performed by the US 6th Fleet.

The number of visits by year varied considerably for reasons that will be discussed below. For the 2014–2021 NATO Black Deployments see Table 1 and Figure 3

There were also significant fluctuations in the number of modern missile ships that are the main deterrents against the Russian aggression.

Only in 2019 and 2021 a fairly large number of missile ships — cruisers, destroyers and frigates — was involved in the deterrence operations, which clearly indicates the complexity of the latter. (See Figure 4).

The data shows that not only in 2021, but in all years since the beginning of the Russian aggression against Ukraine in 2014, the main burden of ensuring naval presence to deter Russia in the Black Sea fell on the 6th US Navy that together account for 76 out of 191 total over the course of the last eight years or about 40%.

Of course, it is not just the number of the Black Sea deployments that are crucial in deterrence operations, but also, the length of their stay when the Black Sea was «covered.»* The above data shows in 2016-2018 it was insufficient with the situation improving in 2019-2021.

The inconsistency of the warship deployment numbers that clearly manifested itself in 2016, could not help but raise questions.

We believe that the reason for this trend is that in 2015-2016 there was a significant expansion of the US Naval Forces Europe-Africa and US 6th Fleet in Europe and Africa, specifically in the Black, Mediterranean and Baltic Seas. For instance, in response to the concerns of NATO's Baltic member states regarding the possible Russian aggression, NATO has significantly increased the scale of its naval exercises in the region (BALTOPS). In addition, Russia's direct intervention in the Syrian war on the side of the Assad regime that began with air strikes on September 30, 2015, required an increase in the presence of NATO ships in the Eastern Mediterranean.

Finally, since 2015, Russia has successfully applied the tactic of "stretching" the US 6th Fleet ships and permanent naval teams of the NATO Naval Command between different theaters, given that their area of responsibility includes not only the Mediterranean and the Black Sea, but also the entire Europeans coast, including the Baltic Sea.

Meanwhile, the 2016 appearance in Russia’s Kaliningrad region of ships with the Kalibr cruise missiles and coastal missile systems, as well as the demonstrative redeployment there in October 2016 of the Iskander missile systems further increased the dispersion of the limited forces of the NATO Naval Command in Europe and the US 6th Fleet between the Black, Mediterranean and Baltic Seas.

At present, the structure of NATO's naval forces in the Mediterranean region formed before the occupation of Crimea and the Russian aggression against Ukraine includes two permanent naval frigate groups plus two permanent naval trawler groups under NATO naval command, and the 6th US fleet.

We believe that such "peacetime" structure and composition of the US-NATO naval group is no longer sufficient for balancing military threats from Russia that extend from the Baltic to the Black Sea and Syria.

Budget allocations notwithstanding, there is no doubt that countering that challenge requires a much stronger and well-coordinated US-NATO naval deterrence force in the Black Sea/Mediterranean region.

At the same time, it’s worth noting that such Black Sea naval missions often involve excessive caution regarding visits to the Ukrainian port of Odesa. Specifically, in 2021, of the 31 visits, only 11 entered the Odesa port with 10 of the 11 port calls — in the first half of 2021.

That is, in the second half of 2021, the supposed demonstration of naval solidarity with Ukraine took place without any visits to the Ukrainian port, most likely in order not to «irritate Russia again.»

On January 20, 2022, the Russian Federation announced a series of exercises under the general guidance of the commander-in-chief of the Navy that in January-February 2022 would take place in all zones of the Russian Navy’s responsibility.

According to Russia’s Defence Ministry news release, the main purpose of the exercise is to let the Navy and Aerospace Force to practice operations to protect Russia’s national interests in the World Ocean and also to resist military threats to Russia on the sea and ocean.

"The exercises will encompass seas washing Russia and also World Ocean areas of key importance. There will be some exercises in the Mediterranean and Northern seas and the Sea of Okhotsk, in the Northeastern Atlantic and in the Pacific," the Defense Ministry said.

Participating in the exercises will be more than 140 combat and supply ships, more than 60 aircraft, 1,000 pieces of military equipment, and 10,000 military servicemen.

Meanwhile, six large landing ships of the RF Northern and Baltic Fleets are now deploying towards the Mediterranean and later possibly, the Black Sea. In our opinion, that task group capable of landing an entire marine brigade with equipment, may enter the Black Sea as early as February 2-4, 2022.

This article has been prepared with the support of the European Union in Ukraine. The content of the article is the sole responsibility of the authors and does not necessarily reflect the position of the EU.