Maritime Security of Ukraine. A Reference Work. (6) "Historical Waters" of the Sea of ​​Azov and the Kerch Strait

Article 2 of the Agreement includes the following clauses:

1. Merchant ships and warships, as well as other government ships flying the flags of Ukraine or the Russian Federation operated for non-commercial purposes, enjoy freedom of navigation in the Sea of Azov and the Kerch Strait.

2. Merchant ships flying the flags of third countries may enter the Sea of Azov and pass through the Kerch Strait when heading to or returning from a Ukrainian or Russian port.

3. Warships or other government ships of third countries operated for non-commercial purposes may enter the Sea of Azov and pass through the Kerch Strait when heading for a visit or business call to the port of one of the Parties on the invitation or permission of that Party approved by the other Party.

That is, among other things, the Kerch Treaty stipulates that warships or other government ships of third countries operated for non-commercial purposes invited by Ukraine, may not enter the Sea of Azov and pass through the Kerch Strait without the consent of the Russian Federation.

Also, the first paragraph of Article 1 of the Kerch Treaty states that historically, the Azov Sea and the Kerch Strait are internal waters of Ukraine and the Russian Federation.

About 150,000 years BC Crimea already had a number of Neanderthal settlements later uncovered by archaeologists. The first ethnic groups in Crimea that can be named were the Cimmerians and Tauri (I millennium BC).

The VII - V centuries BC in Crimea saw the establishment of Pantikapai (modern Kerch area), Chersonese (modern Sevastopol), Kercinitida (modern Yevpatoria), Feodosia and other settlements founded by the Greek colonists.

As the centuries passed, a variety of peoples, cultures and cities appeared and disappeared on the Crimean peninsula. At one point, the region became the last refuge for the Scythian Statehood — from the 2nd century BC to the 3rd century AD, the late Scythian State with the capital in Naples Scythian thrived in the area of present-day Simferopol.

At different times, Crimea was under to the Roman Empire, the Goths, Huns, Byzantium, Khazars, Pechenegs, Polovtsians and other peoples. In the 10th-11th centuries the Eastern Crimea was most likely part of the Tmutarakan principality that in turn, was part of the Kievan Rus.

In the 13th century, the Mongolian army of Khan Batu conquered Crimea and the peninsula became part of the Golden Horde.

Later, between 1441 and 1783, for almost 350 years, Crimea, the North Azov and the Black Sea areas were part of the Crimean Tatar state of Crimean Khanate.

In 1783, the Khanate was annexed by the Russian Empire, which had sealed the fate of the peninsula for the next 134 years, after which, in 1917, the empire itself ceased to exist as a subject of international law.

As for the history of the Sea of Azov and the Kerch Strait, the following recap is quite telling.

In ancient times, the Kerch Strait was called the Bosporus Cimmerian.

It’s a well-known fact that the Greeks called the Sea of Azov the Meotian lake, the Romans — the Meotian swamp, the Meotians — Temerinda, the Arabs — Baral-Azov, the Turks - Bahr-Assak, the Slavs — the Blue Sea or according to another version, the Suezian Sea, the Genoese — Mare Tane and so on.

Each people that lived in the Crimean peninsula, modern Kherson, Zaporizhia, Donetsk, Rostov and Krasnodar regions, when using the Sea of Azov, gave it its own name.

Starting with the Middle Ages, the Genoese and Venetians began to draw the maps and nautical charts of the Sea of Azov.

So, for thousands of years, the Sea of Azov — Lake of Meotia, Swamp of Meotia, Temerinda, Baral-Azov, Bahr-Assak, Suroz Sea, Mare Tane, etc. — has been used by numerous peoples, as evidenced by the abundant findings.

A curious footnote — while the Sea of Azov is the most shallow sea in the world, it is at the same time, the most continental one, i.e., the farthest from the ocean.

As evidenced by the Soviet documents, the administrative border in the Kerch Strait was defined between the Krasnodar Territory and the Crimean Autonomous Socialist Soviet Republic.

Map of Northern Caucasia, Krasnodar, 1926. The administrative border in the Kerch Strait was defined between the Krasnodar Territory and the Crimean Autonomous Socialist Soviet Republic. Photo: BSNews archive

At the time, some maps even showed the sea border between the republics. 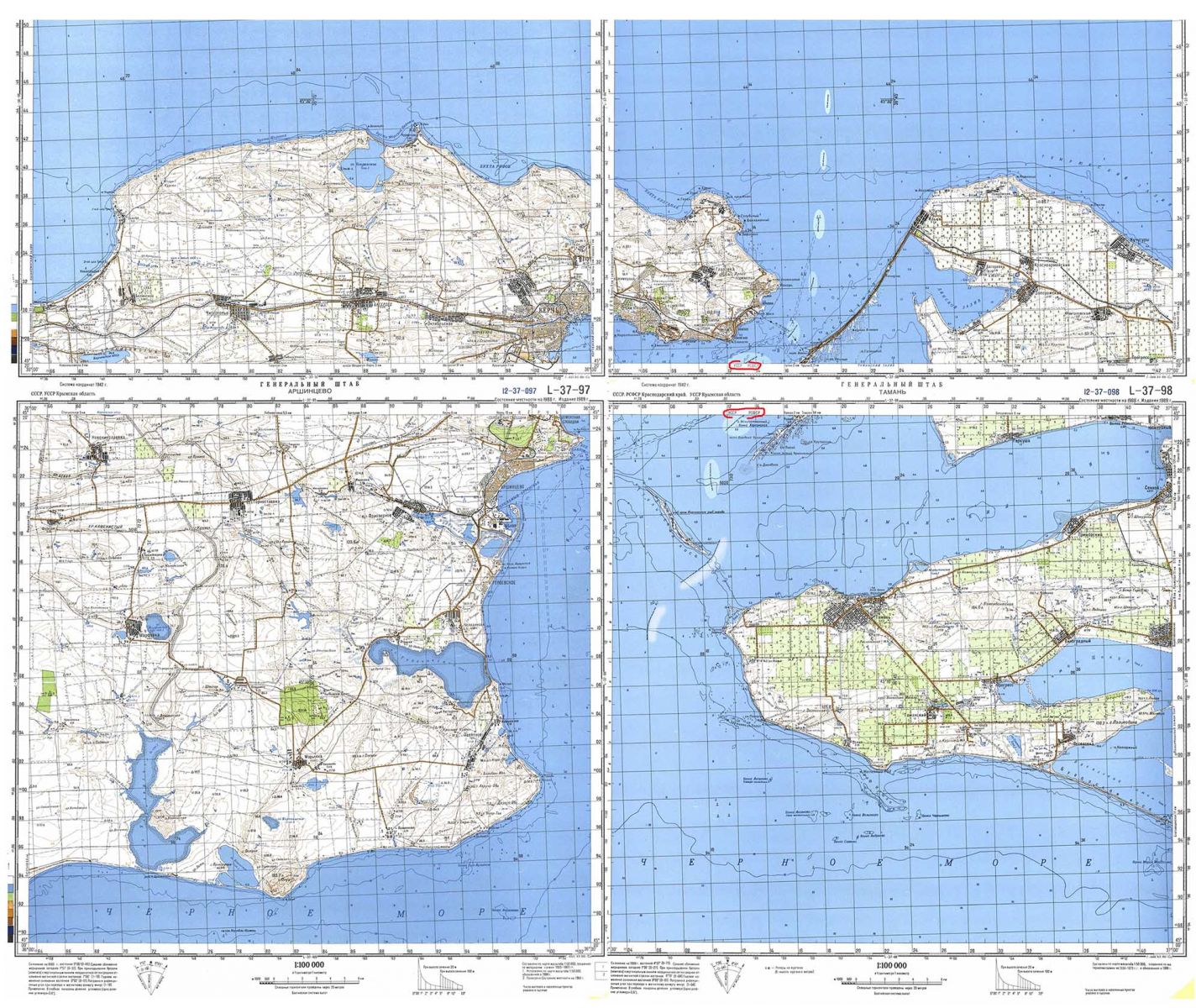 Map of the USSR Joint Staff, 1989. The official Soviet map shows the administrative border between the USSR and the RSFSR in the Kerch Strait and the adjacent part of the Sea of Azov. Photo: BSNews archive

However, on June 12, 1990, the Congress of People's Deputies of the RSFSR declared the state sovereignty of the RSFSR followed by the declaration of Ukraine’s independence a year later, when on August 24, 1991, the Verkhovna Rada of the Ukrainian SSR proclaimed the creation of an independent Ukrainian state. 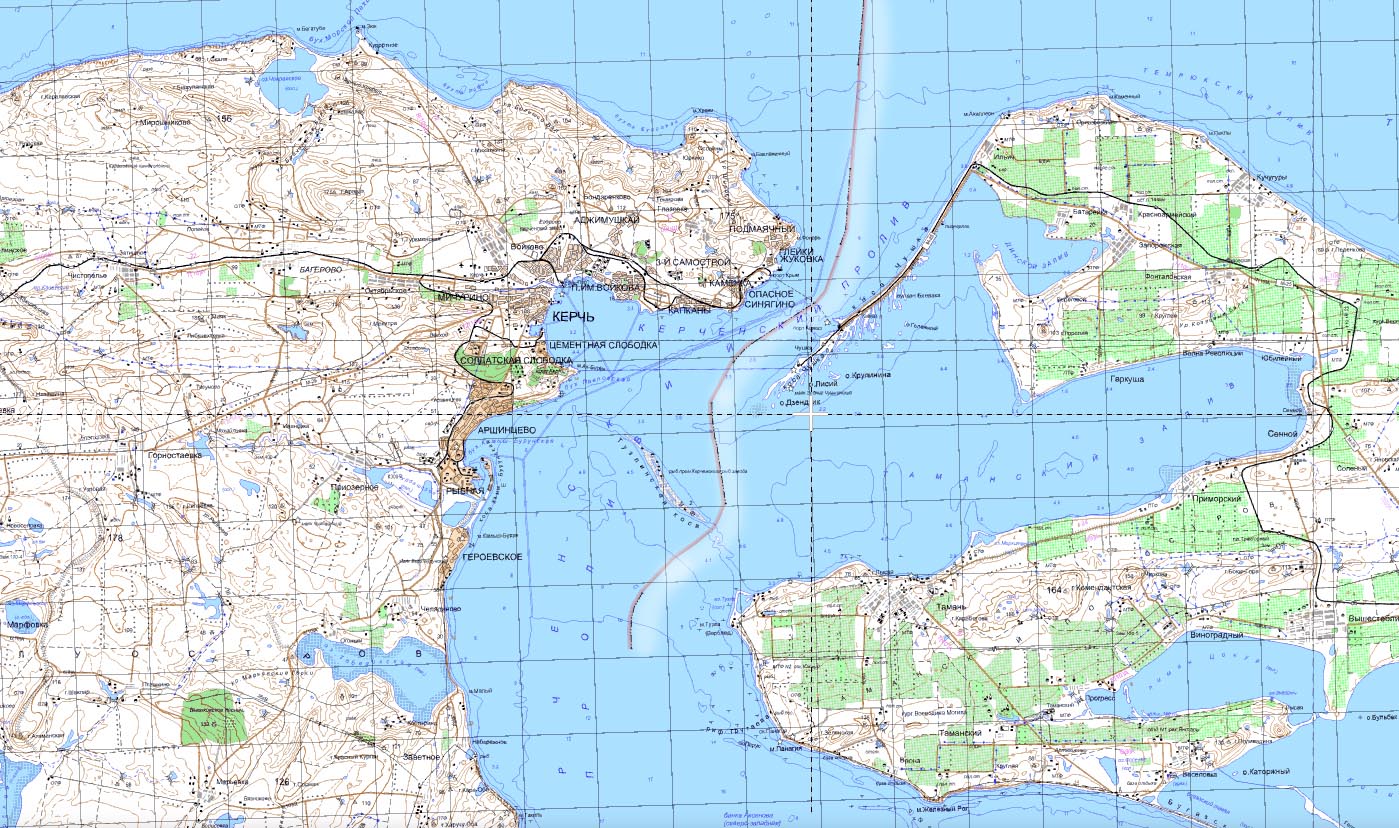 The state border between the Russian Federation and Ukraine in the Kerch Strait and the adjoining part of the Sea of Azov is printed on the official Russian map with the corresponding symbol. (in Russian) State Scientific and Implementation Center of Geoinformation Systems and Technologies of FSUE "GOSGISCENTR". 2001, M: 1: 200000. Photo: BSNews archive

Our historical flashback wouldn’t be complete, though, without the Agreement Establishing the Commonwealth of Independent States [5], hereinafter referred to as the Belovezh Agreement, that stated that as of the date of the agreement, the Union of Soviet Socialist Republics ceased it existence as a subject of international law and a geopolitical reality. That is, the Belovezh Agreement officially put a historic end to a superpower of the past, the Soviet Union.

All of the above clearly demonstrates that from the Neanderthals age in Tavrida-Crimea approximately 150, 000 years BC until present, the States under the names of Ukraine and the Russian Federation have been using the waters of the Sea of Azov and the Kerch Strait for less than 30 years.

Therefore, considering both the general historical background and the specific facts, the allegation that the waters of the Sea of Azov and the Kerch Strait mentioned in the Kerch Treaty have a certain «historical identity» are simply meaningless.