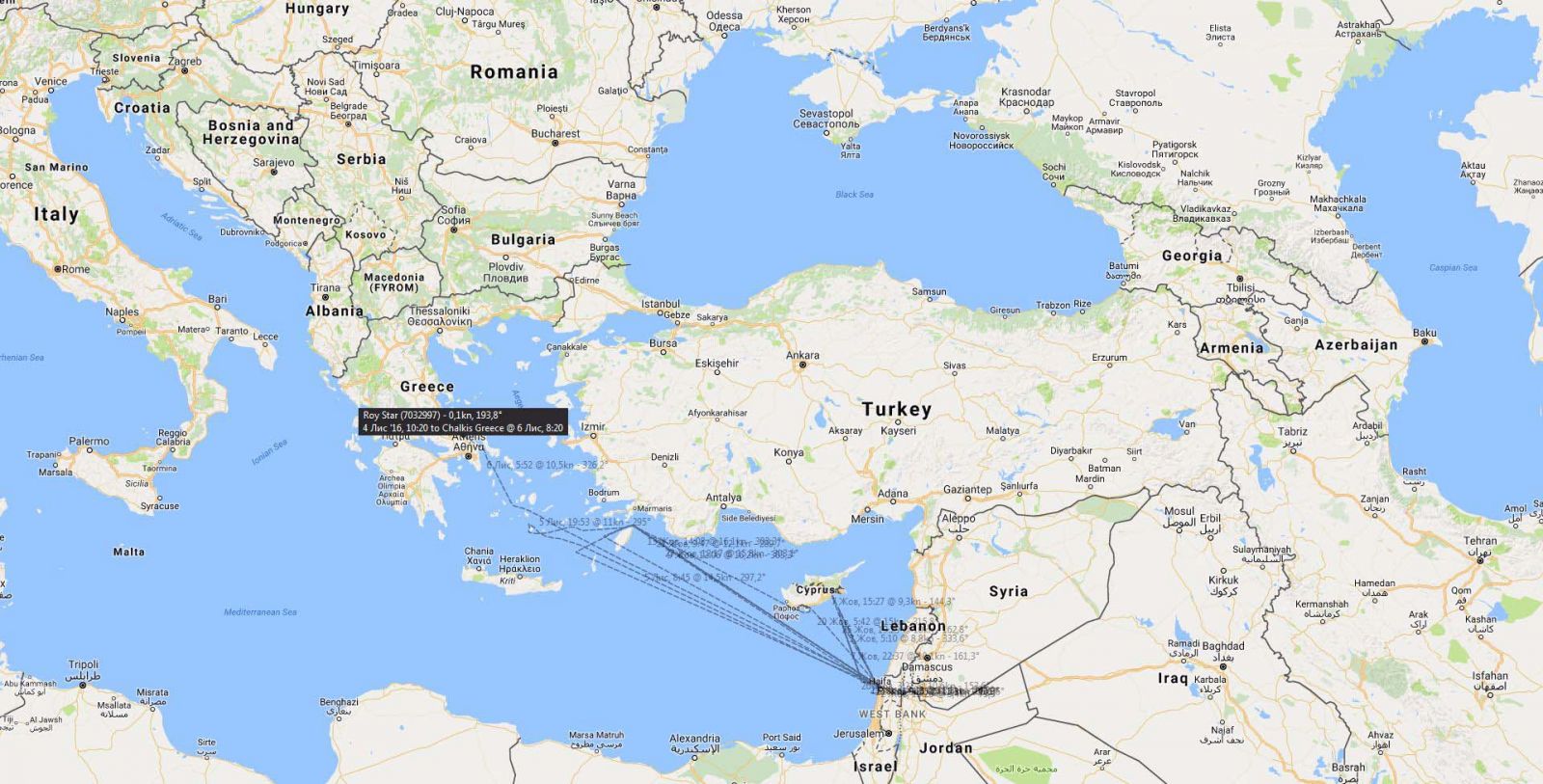 The ROYAL IRIS cruise liner has been laid up at the Greek port of Chalcis since November 2014.
All maps are based on www.shippingexplorer.net

The Crimean Department of the Maidan of Foreign Affairs
Chief Editor BSNews, Yalta-Kyiv.

In the course of a journalistic investigation, the monitoring group of the Maidan of Foreign Affairs and the BSNews has revealed a carefully concealed by the Russian Federation in the fear of sanctions passenger liner scheduled for the cruise route Sochi - (Novorossiysk?) - Yalta - Sevastopol - Istanbul - Sochi. In the interest of the security of information sources, the methodology and the course of the journalistic investigation are not disclosed.

The journalistic investigation has been conducted since November 2016, after at the Russian People’s Front Yalta «Forum of Action. Crimea», the Russian President gave instructions for the resumption of the Black Sea cruises.

On December 21, 2016, the Deputy Minister of Transport of the Russian Federation and Head of the Federal Agency for Maritime and River Transport, Viktor Olersky, announced at the Maritime Board in Sevastopol that Rosmorport would fulfill the RF President's instruction on regular maritime communication between Sochi and Crimea in the 2017 holiday season.

«It is impossible not to fulfill the order of the President of the Russian Federation. The Ministry of Transport is fully aware of this. As always, we will have to make a strong-willed decision. Obviously, Rosmorport will be its executor,» stated Olersky.

«We have calculated that a 500 passenger cruise ship can work efficiently work on the route from the end of April to the beginning of October -0 about 160 days. We have worked with the financial model making some assumptions. With 160 operational days and an average load of 500 passengers on a cruise, with the vessel being in the operational leasing, the operating loss amounted to 47 million rubles a year, and by the end of the fiscal year - 200 million» continued Olersky.

He added that «the model, of course, can reach operating profit if the volume of the passengers increase to over 750 and the operational period is extended.»

At the same time, as Mr. Olersky stated, in 2016, the RF Ministry of Transport managed to obtain the consent of the Turkish authorities for the cruise ship call in Istanbul, in spite of the EU sanctions limiting the call of vessels to the Crimean harbors.

On February 27, 2017, the provisional governor of Sevastopol, Dmitry Ovsyannikov, at the Russian investment forum Sochi-2017, in an interview with TASS said that the cruise liner on the route Sochi-Yalta-Sevastopol-Istanbul would start operation on May 1 of this year.

«Today, following the results of the conversation with the Rosmorport, we saw a cruise ship that they purchased so that on May 1 a cruise line on Sochi-Yalta-Sevastopol-Istanbul-Sochi route could be launched. The passenger traffic will be formed by the vessel's capacity. If this project causes interest among tourists, Rosmorport is ready to further develop this area, as confirmed by the fact that they have already taken the first step by purchasing the ship and preparing it for launch on May 1,» said Ovsyannikov.

He clarifies that it was a cruise and not a high-speed passenger service. According to him, Sevastopol, will provide a berth for mooring the ship.

The name of the purchased cruise liner has not been announced, although according to the info obtained by the Maidan Foreign Affairs and BSNews Monitoring Group, the deal has already taken place.

The vessel if the passenger liner ROYAL IRIS, now displayed in AIS systems under the name ROY STAR. The regime of secrecy seems to be preserved in the interests of the seller who does not want publicity because of the sanctions in connection with the annexation of the Crimea. Most likely, the "secrecy" will remain until the registration of the vessel under the flag of the Russian Federation. 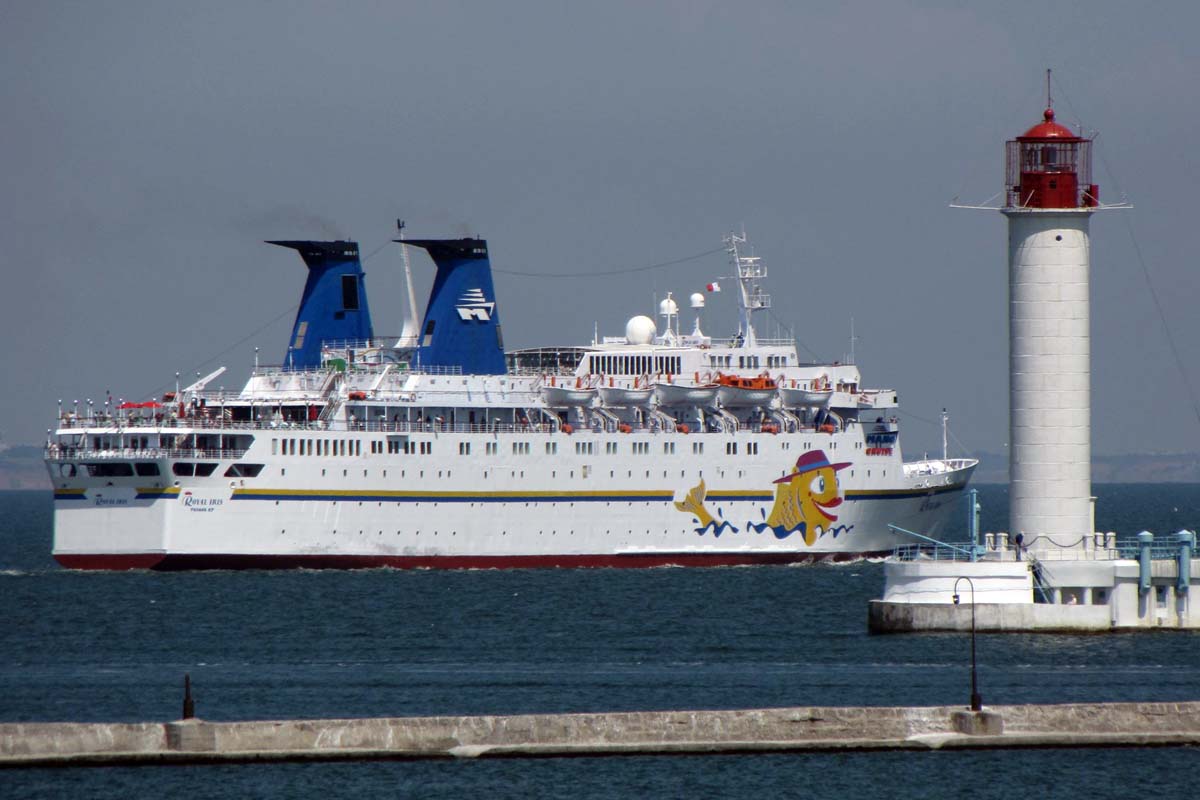 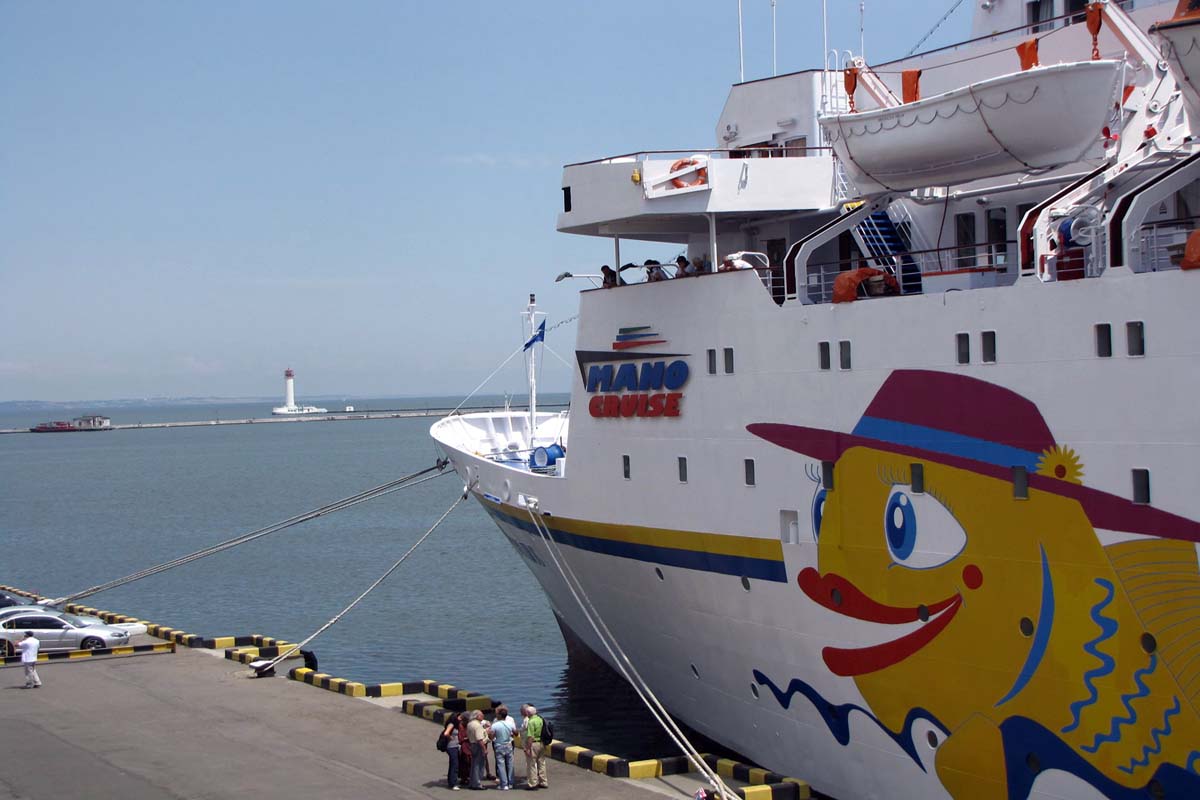 Liner ROYAL IRIS in Odessa on June 23, 2009. the operator's logo can be seen on the board and chimney. Photo by Vladimir Trofimov, Odessa, exclusively for the BSNews.

The vessel was purchased by the federal unitary enterprise Rosmorport. The price of the transaction, including the cost of the renovation, is $ 12.7 million.

A new company, the Black Sea Cruises, LLC, was created exclusively for operating the liner.

The company’s authorized capital is 10,000 rubles and its sole founder is Rosmorport. The firm was registered on January 29, 2017 by the inter-district inspectorate of the Federal Tax Service of Russia No. 16 for the Krasnodar Territory. Its legal address is: 354000, the Russian Federation, Krasnodar territory, Sochi, 4 Cruise Harbor, suite 13.

The General Director of the Black Sea Cruises, LLC is S. V. Dadyka. Prior that, he had worked as the head of the Rosmorport’s port and fleet management department.

Currently, ROYAL IRIS / ROY STAR is located in the Greek port of Chalcis (Chalkida). The liner arrived there for lay up on November 6, 2014. Before that, it was operated on cruise lines between the Israeli port of Haifa and the ports of Cyprus, the islands of Crete and Rhodes. 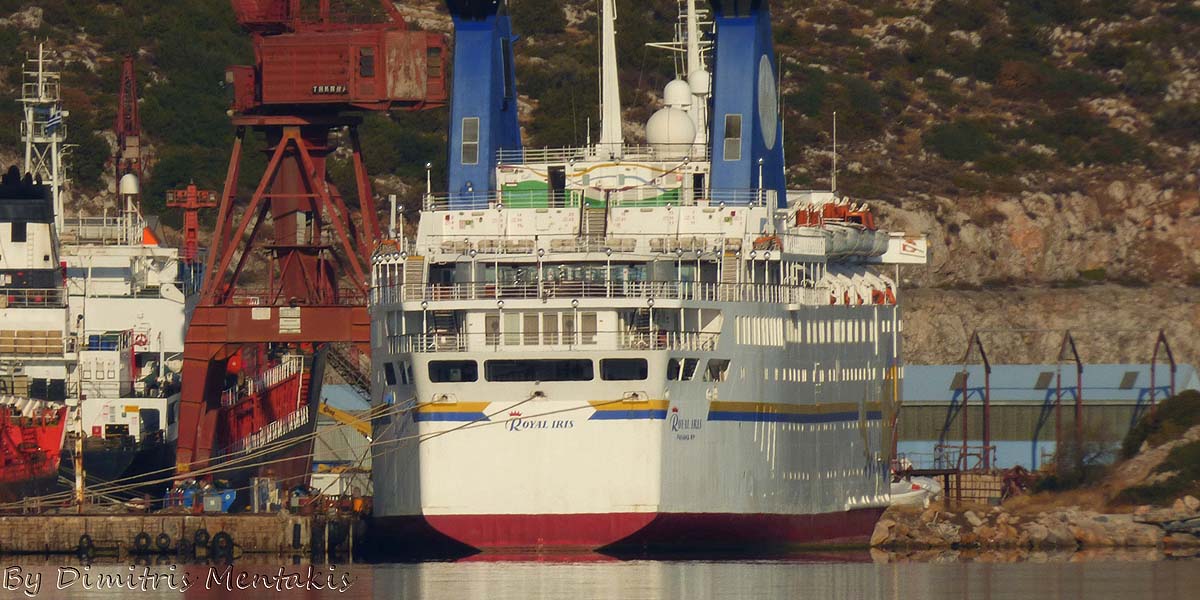 Apparently, in 2014, the Israeli company MANO MARITIME considered it inexpedient to continue the operation of the obsolete airliner. The ROYAL IRIS / ROY STAR is a former car ferry built in 1971 at the Dubigeon Normandie shipyard, Nantes. In 1975 it was rebuilt into a cruise ship.

Rosmorport has already announced the vacancy of the cruise ship captain:

The ROYAL IRIS brought tourists from Israel to Odessa in 2008 and 2009. Below are the photos from those years made by the famous Odessa marine photographer Vladimir Trofimov. 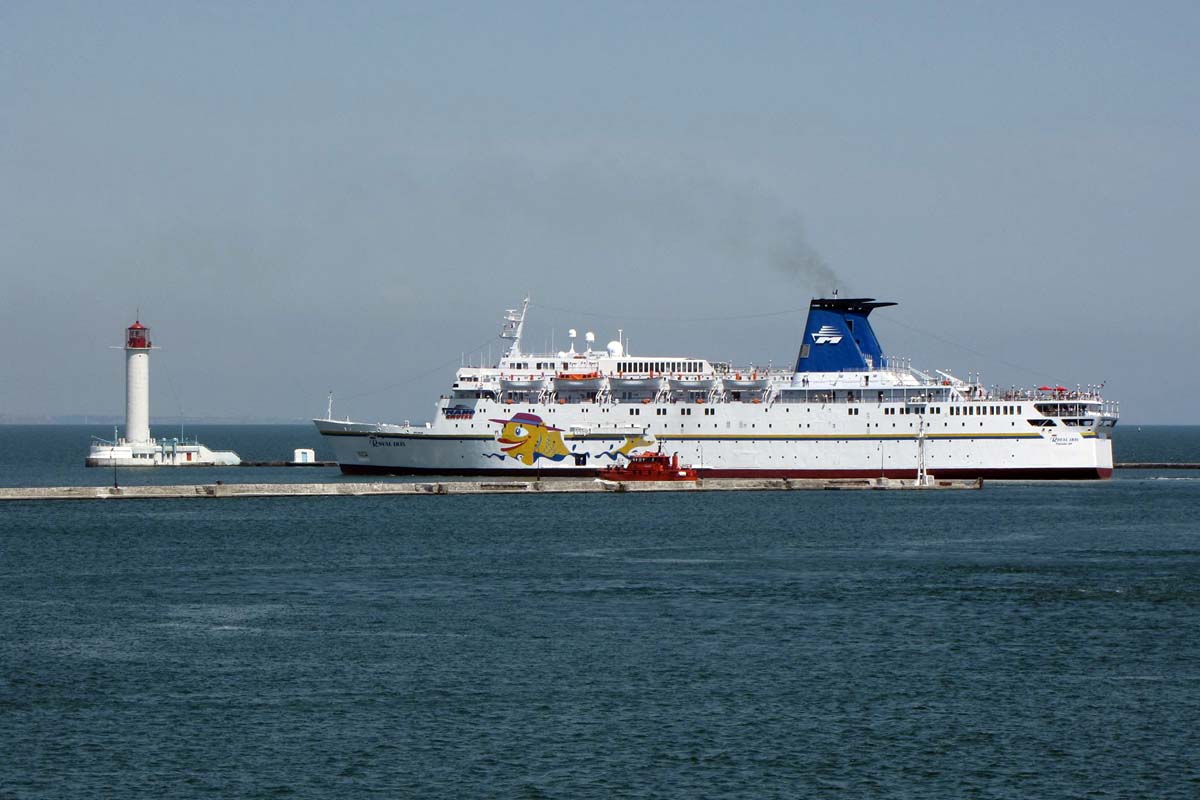 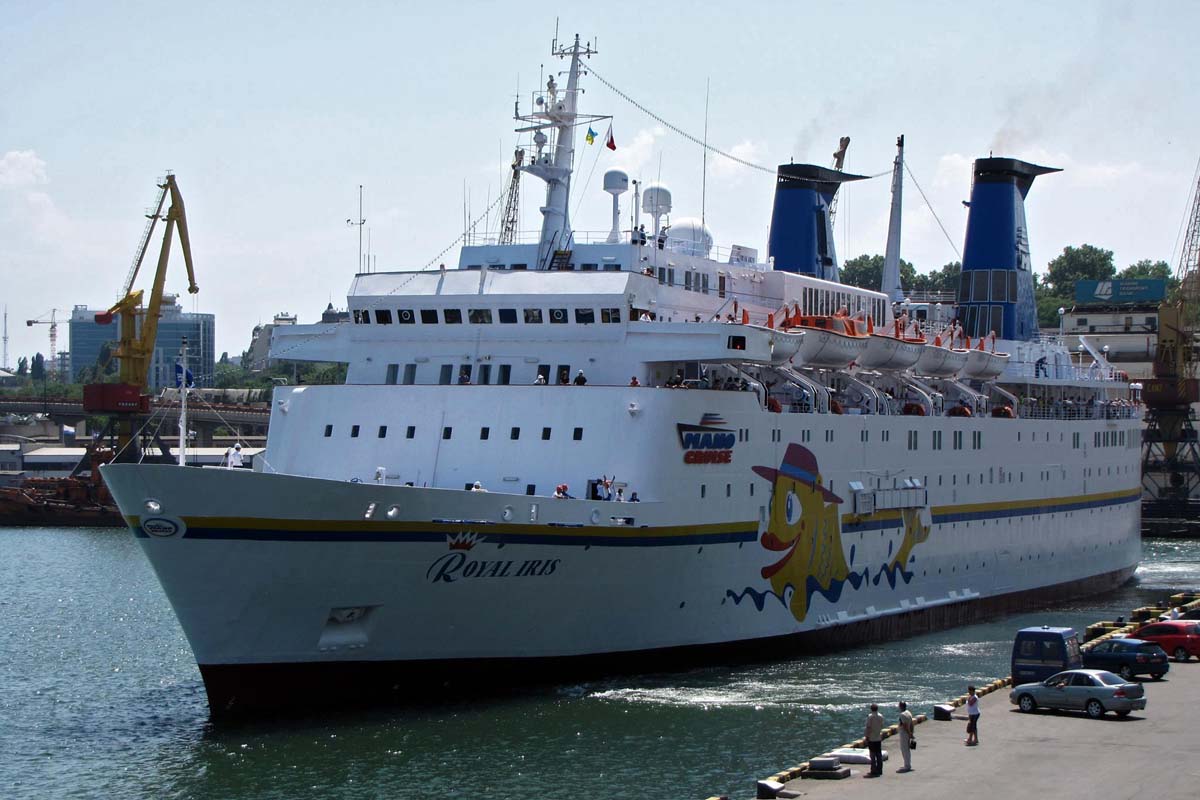 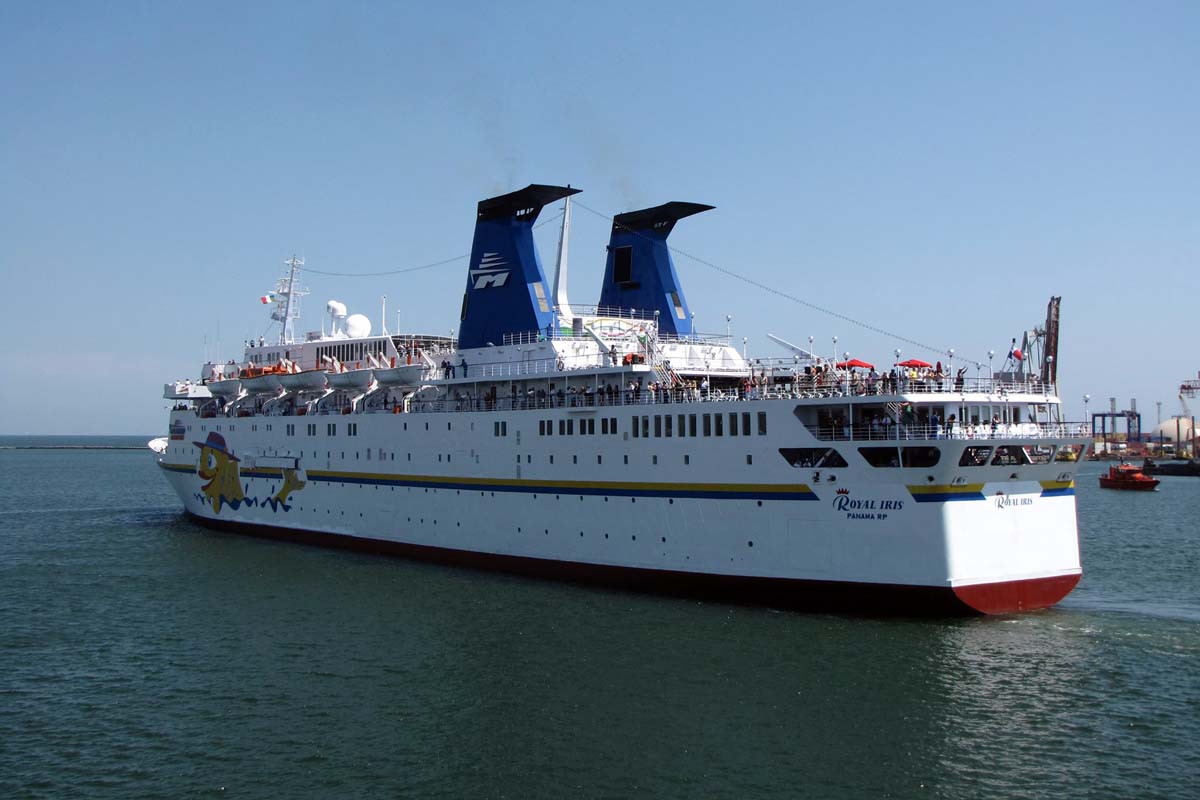 The monitoring group would be very grateful to the ship owners, operators and brokers who would help us correct any inaccuracies or errors by writing to: [email protected]

The investigation was carried out within the framework of the project "International Sanctions Against the Annexation of the Crimea: Efficiency and Impact, Compliance and Circumvention Techniques" with the support from the US Embassy in Ukraine Media Development Fund. The views of the authors do not necessarily reflect the official position of the US government.