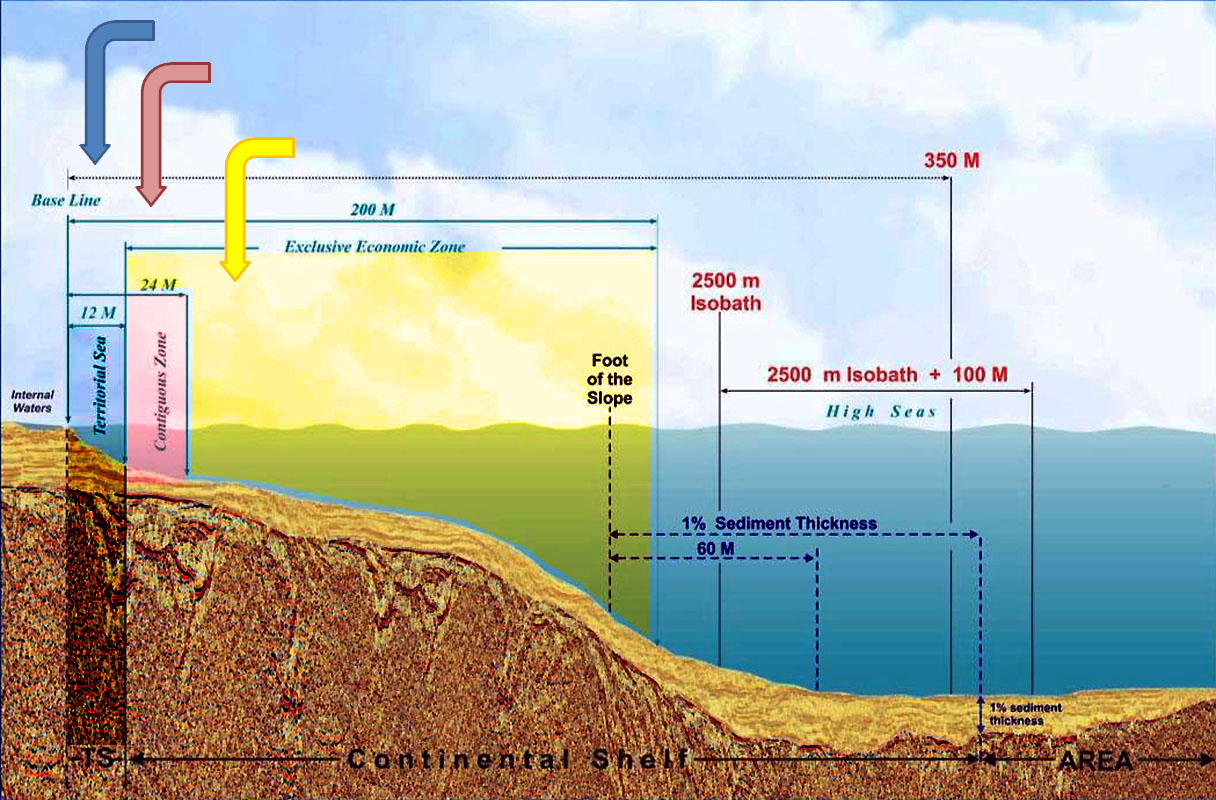 Recent geological, geophysical and drilling operations in various regions have proved the offshore areas and continental slopes to host a wide range of mineral resources, including oil and gas, thus, confirming both the feasibility and the economic value of shelf exploration [1]. In particular, exploration of the Ukrainian shelf of the Black and Azov seas has yielded considerable mineral reserves, including up to 1583.5 billion cubic meters of natural gas and up to 409.8 million tons of crude oil, or more than 30 percent of Ukraine's total hydrocarbon reserves. At the same time, only 4 percent of them have been extracted, compared to almost 70 percent of the explored coastal hydrocarbon deposits.

Meanwhile, taking into account Russia’s propensity for anti-competitive practices and monopoly schemes, one of its reasons for occupying Crimea was getting access to the peninsula’s energy resources. The earlier forecasts of the American IHS CERA consulting firm on Ukraine’s prospects in traditional and non-traditional natural gas production clearly hadn’t gone unnoticed in the RF. According to the IHS CERA, by 2030, Ukraine could reach the mid-1970s gas production levels, which meant that besides fully meeting the domestic demand, the country would be able to export natural gas to Central and Eastern Europe, thus, squeezing out the Russians. The northwestern sector of the Black Sea between Crimea and Odessa region was believed to be particularly promising — the assumption reaffirmed by ExxonMobil and OMV’s successful offshore explorations of the neighboring Romanian sector [3, p. 152].

Needless to say, energy security is given special attention in the current National Security Strategy of Ukraine [4].

As far back as 1996, the Cabinet of Ministers of Ukraine (CMU) approved the Program of Development of Hydrocarbon Resources of the Ukrainian sector of the Black and Azov Seas [5]. However, given the current occupation of not only Sevastopol and the Autonomous Republic of Crimea, but also, the waters around the Crimean peninsula, the Program certainly calls for an update.

In the meantime, let’s take a closer look at the provisions of international maritime law in the area of sovereign rights and the jurisdiction of a coastal state over the extraction of minerals, including hydrocarbons, within its exclusive economic zone.

Article 56 of the United Nations Convention on the Law of the Sea [6] (UNCLOS) states that in its exclusive marine zone (hereinafter referred to as the EEZ), a coastal state, inter alia, has sovereign rights over the exploration, development and conservation of both living and non-living natural resources in the waters covering the seabed, on the seabed and in the subsoil, as well as over the management of these resources. In addition, according to the relevant UNCLOS provisions, within its EEZ, the coastal state has jurisdiction over the construction and use of artificial islands, installations and structures, marine scientific research, protection and conservation of the marine environment, as well as other rights and obligations under the Convention.

At the same time, Article 50 of UNCLOS stipulates that in its EEZ, the coastal state has the exclusive right to construct, authorize and regulate the construction, operation and use of:

Also, the coastal state has exclusive jurisdiction over such artificial islands, installations and structures, including jurisdiction with regard to customs, fiscal, health, safety and immigration laws and regulations. Artificial islands, installations and structures do not possess the status of islands. They have no territorial sea of their own and their presence does not affect the delimitation of the territorial sea, the exclusive economic zone or the continental shelf. (Article 60, Paragraph 8, UNCLOS).

Meanwhile, on the basis of UNCLOS, Ukraine has adopted its own legislation in regard to the EEZ. Thus, in accordance with the provisions of Article 4 of the Law of Ukraine On the Exclusive Marine Economic Zone [7], in its EEZ Ukraine has:

The sovereign rights and jurisdiction of Ukraine regarding the seabed of the exclusive (marine) economic zone and its subsoil are implemented in accordance with the legislation of Ukraine regarding the continental shelf and the Subsoil Code of Ukraine. For instance, Article 411 of the Economic Code of Ukraine [8] (hereinafter — the EC of Ukraine) also stipulates that in the marine EEZ of Ukraine, the state has exclusive right to construct, authorize and regulate the construction, operation and use of artificial islands, installations and structures for marine scientific research, exploration and development of natural resources and other economic purposes in accordance with the legislation of Ukraine.

Additionally, Article 4 of the Law on Product Sharing Agreements stipulates that in accordance with the product sharing agreement, one party — Ukraine (hereinafter — the state) — entrusts the other party (the investor) with prospecting, exploration and extraction of minerals in a certain area(s) and maintenance of contract-related work for a specified period, while the investor undertakes to perform the work entrusted at his own expense and at his own risk, with subsequent reimbursement of expenses and remuneration in the form of a product share. Part two of the said article stipulates that a product sharing agreement may be bilateral or multilateral, that is, several investors may be parties to it, provided that they are jointly liable for the obligations under such an agreement.

The state ensures and facilitates that the investors, including the agreement operators, their representatives, contractors, subcontractors and other involved organizations/persons, representatives of foreign contractors, subcontractors and their related organizations/persons obtain the respective quotas, subsoil permits and licenses for prospecting/exploration and exploitation of mineral deposits, mining permits, documents certifying the land rights and licenses related to the use of subsoil, the execution of works and the construction of structures provided for in a product sharing agreement (part three of Article 4 of the Law on Product Sharing Agreements).

The parties to the product sharing agreement are the investor(s) and the state represented by the CMU. For resolving issues related to the organization and conclusion of product sharing agreements, the CMU establishes a permanent interdepartmental commission (hereinafter — the Interdepartmental Commission) composed of the representatives of state and local self-government bodies and people's deputies.

The first paragraph of part 1 of Article 6 of the Law on Product Sharing Agreements stipulates that product sharing agreements under the Law may be concluded in respect to individual subsoil area(s) with clear special boundaries and coordinates, that contain mineral deposits or parts thereof of national and local importance, including subsoil areas within the continental shelf and the marine EEZ of Ukraine.

In accordance with part two of Article 6 of the Law on Product Sharing Agreements, an investor may apply to the CMU or the Interdepartmental Commission with a proposal to resolve an issue concerning the tender for concluding a product distribution agreement for a particular subsoil area. The investor has to be notified of the consideration results within three months.

The product distribution agreement tender contest in regard to a particular subsoil area must be conducted in accordance with paragraph 2 of part two of Article 6 of the Law on Product Sharing Agreements when any of the following is present:

The CMU’s decision to conclude an agreement without a bidding contest may be made on the basis of:

According to Article 7 of the Law on Product Sharing Agreements, within two months from the date of the decision to hold the bidding contest, the Interdepartmental Commission must publish the contest announcement in Ukraine’s official printed media and undertake other steps towards organizing the contest, within its competence as determined by the CMU. The contest term should not exceed three months from the bidding offer submission deadline.

Pursuant to Article 19 of the Law on Product Sharing Agreements, the products under a product sharing agreement are subject to distribution between the agreement parties, namely, the state and the investor(s), according to the terms of the agreement that, among other things, must include the terms and procedure for the transfer to the state of its share of the products in accordance with the agreement terms or its monetary equivalent.

Product sharing agreements for hydrocarbons may provide for the continuous distribution of hydrocarbons produced (paragraph 2 of part two of Article 19 of the Law on Product Sharing Agreements).

At the same time, the quarterly share of compensatory products may not exceed 70 percent of the total output produced during the billing period until the investor's costs are fully reimbursed (part three of Article 19 of the Law on Product Sharing Agreements).

What is also worth noting for investors is that the state guarantees that the rights and obligations of the investor defined in the product sharing agreement will be subject to the legislation in force at the time of the agreement, except for legislation that reduces or abolishes taxes or fees, simplifies regulation of economic activity for prospecting, exploration and extraction of minerals, loosens procedures of state supervision (control) in the economic sector, in particular, those pertaining to customs, currency, tax, etc. or mitigate the investor’s liability applied from the effective date of such legislation. With that, part one of Article 27 of the Law on Product Sharing Agreements also stipulates that guarantees of the legal stability do not extend to the legislative changes in the areas of defense, national security, public order and environmental protection.

In conclusion, we would like to stress that to create favorable conditions for the hydrocarbon production on the shelves of the Black and Azov seas and ensure Ukraine’s energy independence, the state should:

1. Pro zatverdzhennya Zagalnoderzhavnoi programy rozvytku mineralno-syrovynnoi bazy na period do 2030 roku: Zakon Ukrainy vid 21 kvitnya 2011 roku № 3268–VI. (On Approving the National Program for Development of the Mineral Resource Base of Ukraine for the Period up to 2030: Law of Ukraine #3268–VI from April 21, 2011), URL: https://zakon.rada.gov.ua/laws/show/3268-17.