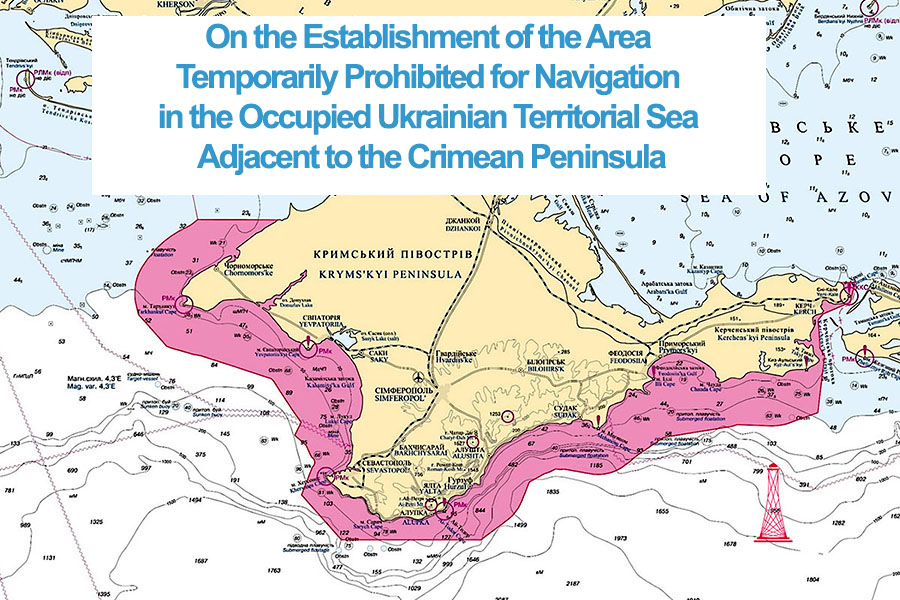 Article 1 of the Constitution of Ukraine [1] establishes that Ukraine is a sovereign independent democratic social state governed by the rule of law.

According to the provisions of Article 2 of the Constitution of Ukraine, the sovereignty of Ukraine extends to its entire territory that is integral and inviolable within the existing border.

At the same time, Paragraph 1 of Article 2 of the United Nations Convention on the Law of the Sea [2] (hereinafter — UNCLOS or Convention) states that the sovereignty of a coastal state extends beyond its land and inland waters to the adjacent maritime zone referred to as «the territorial sea.»

The sovereignty also extends to airspace over the territorial sea, as well as to its bed and subsoil (Paragraph 2, Article 2 of the UNCLOS).

In addition, Article 3 of the UNCLOS establishes that each state has the right to set the breadth of its territorial sea up to a limit not exceeding twelve nautical miles, measured from baselines defined in accordance with the UNCLOS.

In turn, Article 25 (1) of the UNCLOS allows a coastal state to take the necessary steps in its territorial sea to prevent a non-innocent passage.

As is apparent from Article 19 (1) of the UNCLOS, a passage is considered peaceful if it proceeds in accordance with the Convention and other rules of international law and does not breach peace, good order or security of the coastal state.

In accordance with Paragraph 2 of Article 19 of the Convention, a passage of a foreign vessel is considered to be in breach of the peace, good order or security of a coastal state if it engages in the following activities in the territorial sea:

Meanwhile, a coastal state may adopt laws and regulations conforming with the provisions of the UNCLOS and other rules of international law relating to innocent passage through the territorial sea in respect to all or any of the following:

Additionally, without discrimination in form or in fact among foreign ships, a coastal state may temporarily suspend in specified areas of its territorial sea the innocent passage of foreign ships if such suspension is essential for the protection of its security, including weapons exercises. Such suspension shall take effect only after having been duly published. (Article 25 (3) of the UNCLOS).

Finally, Article 24 (2) of the Convention stipulates that a coastal state must give appropriate publicity to any known danger to navigation within its territorial sea.
In this context, it should also be noted that according to Article 1 of the Law of Ukraine On the State Border of Ukraine [3] (hereinafter — the State Border Law), the state border of Ukraine is a line and a vertical surface that stretches along that line that determine the boundaries of the territory of Ukraine over land, water, subsoil and airspace.

The state border of Ukraine is defined by the Constitution and laws of Ukraine, as well as by the international treaties of Ukraine approved by the Verkhovna Rada of Ukraine.

According to Article 3 of the State Border Law, the state border of Ukraine at sea, unless otherwise stipulated by the international treaties of Ukraine, is established on the outer border of the territorial sea of Ukraine.

According to Article 5 of the State Border Law, the territorial sea of Ukraine includes coastal waters extending for twelve nautical miles from the lowest water line both on the mainland and in the islands belonging to Ukraine or from direct baselines connecting the corresponding points. The geographical coordinates of these points are approved in the order established by the Cabinet of Ministers of Ukraine.

In some cases, a different breadth of Ukraine’s territorial sea may be established by international treaties of Ukraine, and in the absence of treaties — in accordance with the generally recognized principles and norms of international law.

At the same time, in accordance with Article 17 of the Law on State Border, respective Ukrainian authorities may establish areas in the territorial sea and inland waters of Ukraine where navigation and stay of Ukrainian and foreign non-military ships and warships is temporarily prohibited. The establishment of such areas has to be announced in due course.

Also, Paragraph 6 of the Rules of Navigation and Stay of Foreign Warships in the Territorial Sea, Inland Waters, Raids and Ports of Ukraine [4] stipulates that foreign warships must not enter and remain in the areas of territorial sea and inland waters where navigation is prohibited.

Nor should we ignore another international instrument critically important to the ocean safety, namely, the International Convention for the Safety of Life at Sea [5] (as amended) (hereinafter — SOLAS).

Thus, under Regulation 4 Navigational Warnings of SOLAS Chapter V Safety of Navigation, each contracting government shall take all necessary measures to ensure that when intelligence of any dangers is received from whatever reliable source, it must be promptly brought to the knowledge of those concerned and communicated to other interested governments.

Moreover, the provisions of Regulation 9 Hydrographic Services of SOLAS Chapter V stipulate that the contracting governments undertake steps to collect and compile hydrographic data, as well as publish, disseminate and update all maritime information necessary for safe navigation. In particular, the contracting governments undertake to cooperate in carrying out, as far as possible, the following navigation and hydrographic services in a manner most suitable for the purpose of aiding navigation:

Additionally, contracting governments are committed to ensuring that charts and navigation aids are as uniform as possible and, whenever possible, take into account relevant international resolutions and recommendations.

At the same time, contracting governments are committed to coordinating their activities to the fullest extent possible, in order to ensure that hydrographic and nautical information is made available on a worldwide scale as timely, reliably, and unambiguously as possible.

Also, pursuant to Regulation 13 Establishment and Operation of Aids to Navigation of SOLAS Chapter V, each Contracting Government, undertakes to provide, as it deems practical and necessary either individually or in co-operation with other contracting governments, such aids to navigation as the volume of traffic justifies and the degree of risk requires.

In order to achieve the greatest possible uniformity of navigation aids, contracting governments are required to take into account international guidelines and guidelines when establishing such aids. Contracting governments must also ensure that information relating to aids to navigation is made available to all concerned. Changes in the transmissions of position-fixing systems that could adversely affect the performance of receivers fitted in ships must be avoided as far as possible and only be affected after timely and adequate notice has been promulgated.

The above SOLAS provisions are duly reflected in Article 76 of the Merchant Shipping Code of Ukraine [6] (hereinafter — KTM). Namely, this article of KTM stipulates that nautical and hydrographic support of navigation in Ukraine’s inland waters, territorial sea and exclusive (marine) economic zone is provided by means of:

In general, as stipulated in item 1.2 of the NHPN Regulation, NHS is a specialized service pertaining to the organization of maritime safety that is provided to maritime vessels in accordance with Ukraine's international obligations.
Specifically, the nautical and hydrographic support is provided via:

In Ukraine, nautical and hydrographic support of navigation is organized and facilitated by the State Hydrographic Service of Ukraine and is financed in accordance with the current legislation (item 1.4 of the NHPN Regulations).

In respect to NHS, the State Hydrographic Service of Ukraine:

So, overall, Ukraine has a well-developed regulatory framework for the nautical and hydrographic support of navigation.

At the same time, it is a generally acknowledged fact that in 2014, the Russian Federation occupied the Ukrainian territories, namely the Autonomous Republic of Crimea and the city of Sevastopol. Subsequently, in order to determine the status of the temporarily occupied territory, the Law of Ukraine On Ensuring the Rights and Freedoms of Citizens and the Legal Regime in the Occupied Territory of Ukraine [9] (hereinafter — the Law on Occupation) established a special legal regime for that area. The special regime defined the new scope and specifics of the activity of local self-government and state bodies, enterprises, institutions and organizations and compliance and protection of human and citizen's rights and rights and freedoms of legal entities.

We would like to point out that due to the occupation of the Autonomous Republic of Crimea and the city of Sevastopol and other numerous illegal actions of the Russian Federation, Ukraine has lost control over most of its territorial sea and exclusive economic zone — all in all, about 100,000 square kilometers in the Black and Azov seas of the 137,000 square kilometers of sea waters total that Ukraine's sovereignty or sovereign rights extend to.

In response, the decree of Ukraine’s Ministry of Infrastructure On Closure of the Seaports [10] has closed the Ukrainian seaports of Kerch, Sevastopol, Feodosia, Yalta and Yevpatoria until the constitutional order of Ukraine in the temporarily occupied territory of the Autonomous Republic of Crimea and the city of Sevastopol is restored.

In addition, due to the inability of servicing ships and passengers, facilitating cargo, transport, freight forwarding and other related activities, ensuring proper level of navigation safety and Ukraine’s compliance with the international treaties requirements as well as adequate environmental protection at sea fishing ports in the Autonomous Republic of Crimea and the city of Sevastopol, by resolution On the Temporary Closure of the Sea Fishing Ports [11], the Cabinet of Ministers of Ukraine has closed the Kerch and Sevastopol Sea Fishing Ports until the constitutional order of Ukraine in these temporarily occupied area is restored.

Therefore, taking into account the above facts, the requirements of the international maritime law and Ukraine’s national legislation, as well as the present objective impossibility for Ukraine to comply with the Regulation 4 Navigational Warnings, Regulation 9 Hydrographic Services and Regulation 13 Establishment and Operation of Aids to Navigation of SOLAS Chapter V Safety of Navigation in the RF-occupied inland waters and territorial sea around the Crimean peninsula, as a coastal state, Ukraine is obligated to establish within its inland waters and territorial sea around the Crimean peninsula an area where navigation and stay of Ukrainian and foreign non-military vessels and warships is temporarily prohibited until Ukraine’s constitutional order there is restored. 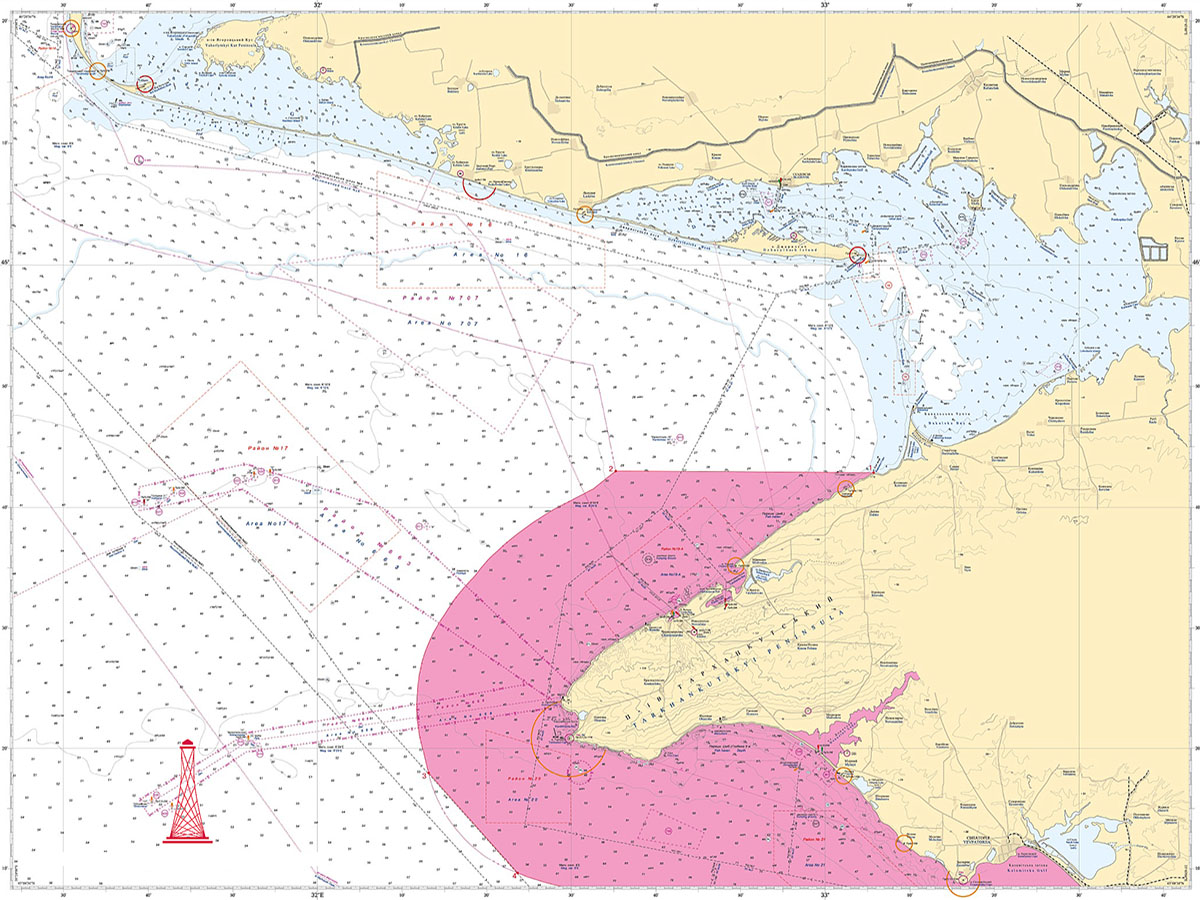 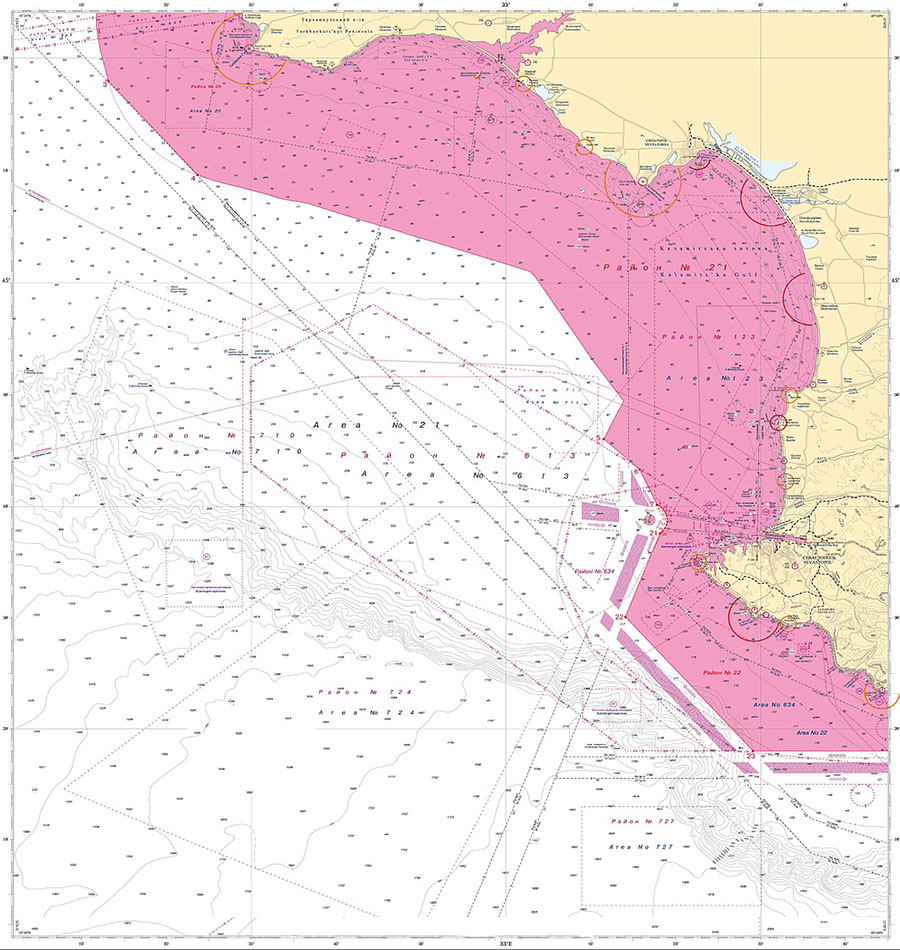 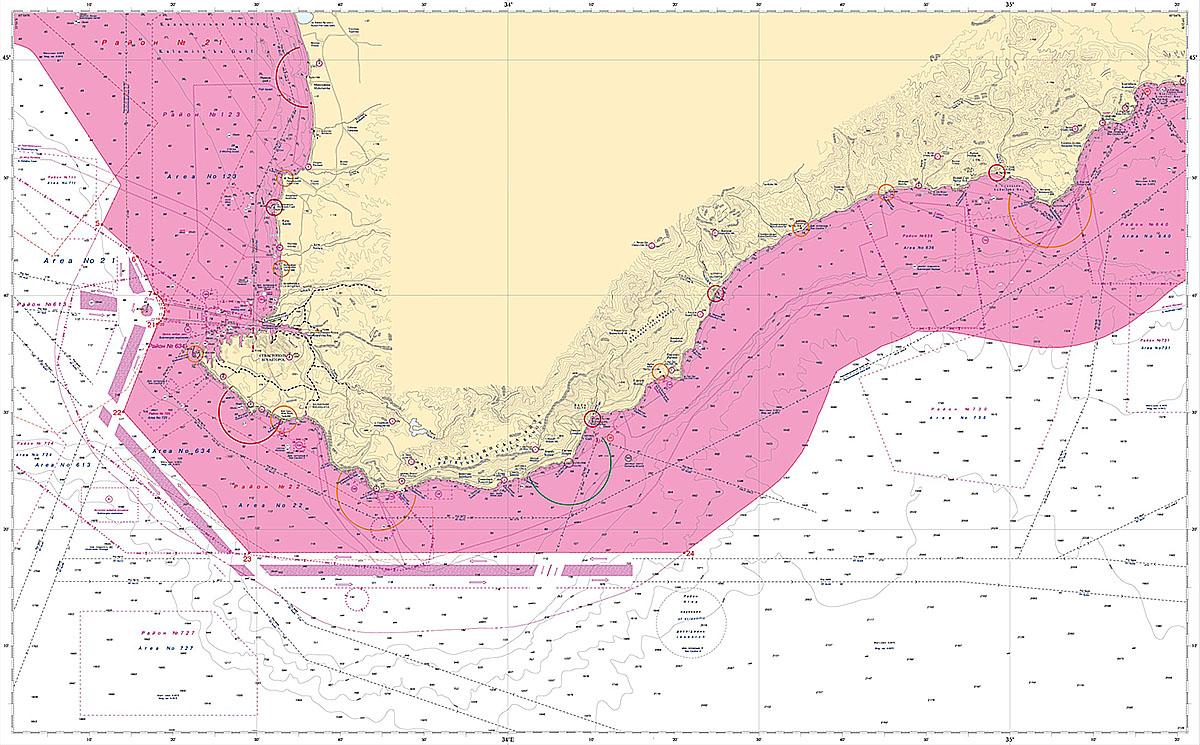 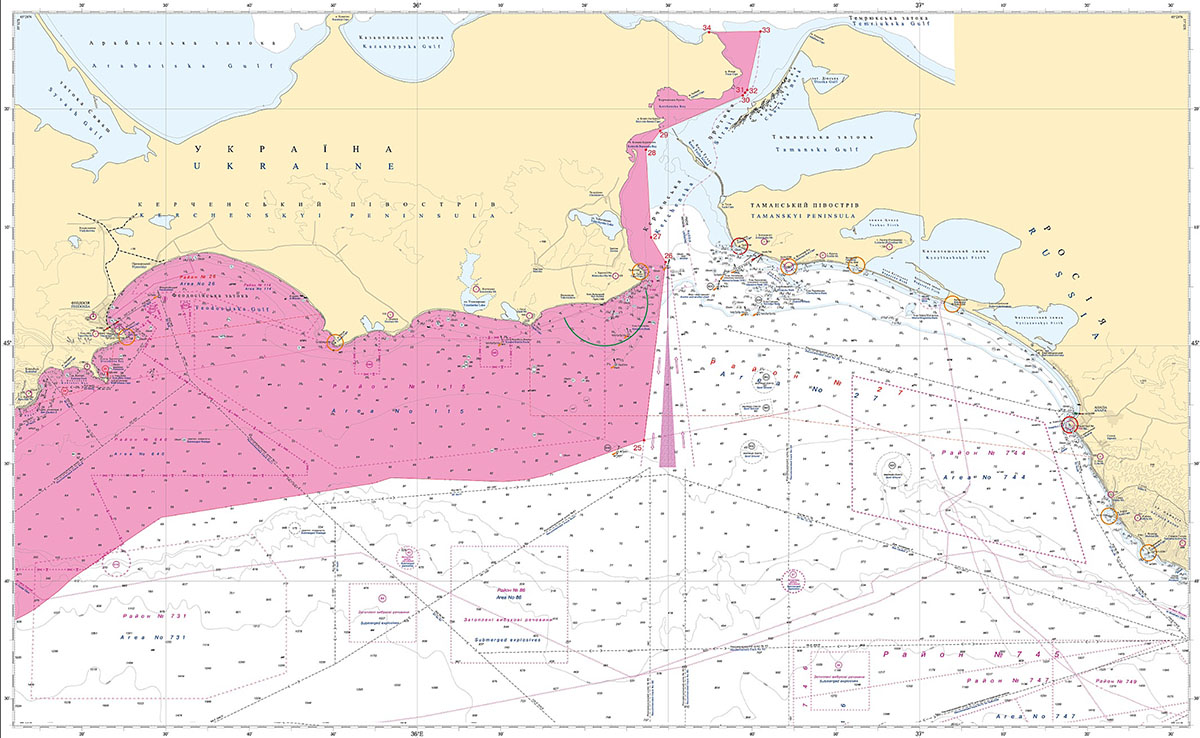 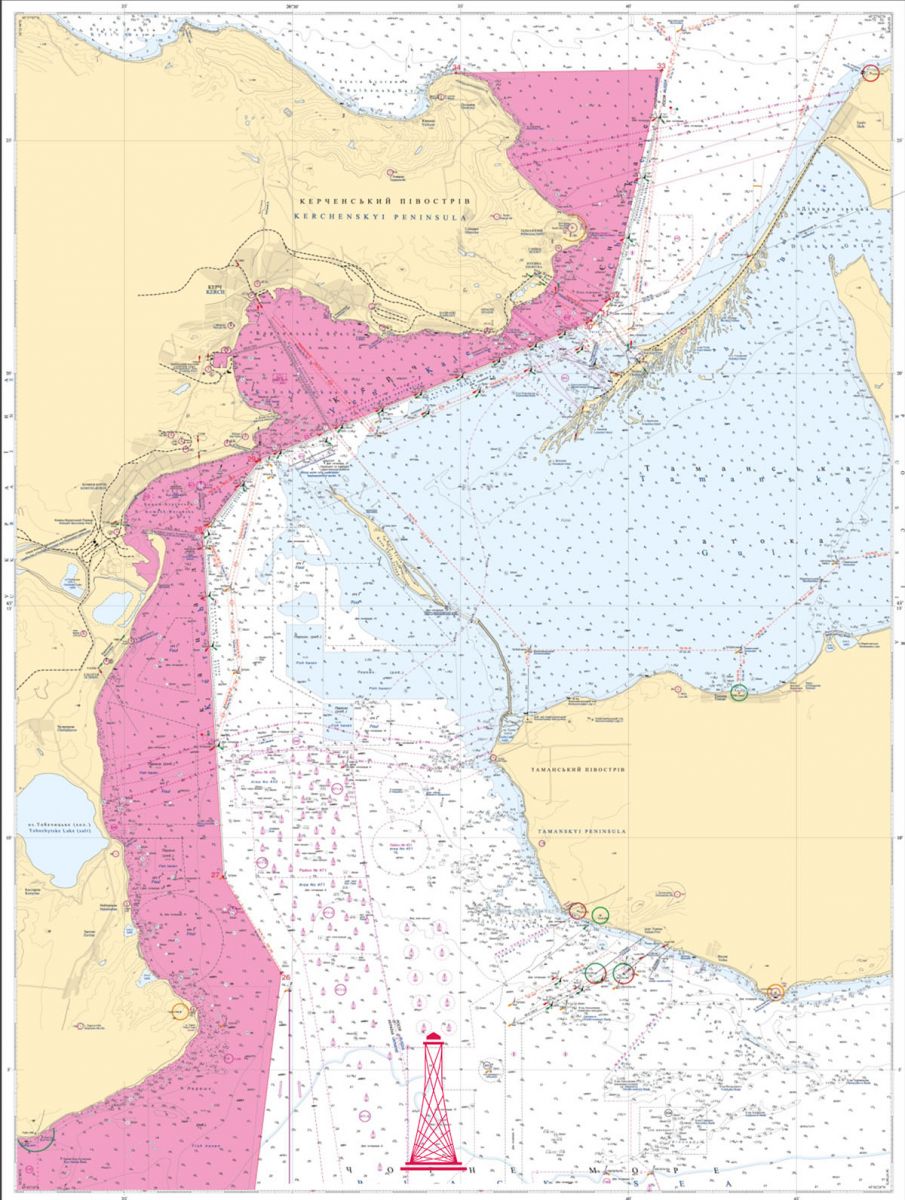