Turkey's Energy and Natural Resources Minister Taner Yildiz stated Friday, Turkey was offered to become a partner of the Trans Adriatic Pipeline (TAP) and said, once they assess the project, they would reconsider the offer again.

Yildiz received the chairman board and members of the Association of Businessmen and Executives of OSTIM Organized Industrial Zone (ORSIAD) at his Ministry on Friday where he replied to the questions of press members in regards to the agenda topics.

Upon a question, Yildiz said, Shah Sea Consortium preferred the TAP natural gas pipeline to move the natural gas of Azerbaijan to Europe and wished luck.

Yildiz noted that BP made a statement in Baku that members of the Shah Sea-II Consortium opted TAP. 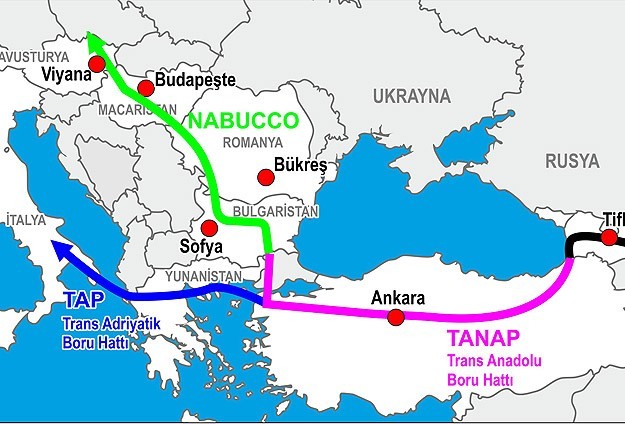 Yildiz drew attentions to TANAP (Trans Anatolian gas pipeline), domestic industry related investments in Turkey and decision of $1.8 million tonnes steel tube producing and said, "Will it go towards north or south of Europe after this? This is where the decision is locked at. Well, it's been decided to go towards the south of Europe for now. There are no serious differences for our point of view."

"It does not meet the natural gas need of Europe"

Yildiz was asked what would be the future of Nabucco and he replied by saying that the natural gas need of Europe would be about 700 billion cubic metres by 2030.

"Israeli natural gas followed by new other nautral gases to be found in Mediterranean basin as well as Iraqi natural gas, South Stream, Nabucco West, TAP and other develop-to-be projects; none of these will meet the natural gas need of Europe. All these projects are needed," said Turkish minister.

Yildiz said six countries including Turkey would assess the West Nabucco project and added, "Once assessing all these, we will also consider the TAP topics."

No price hike for electricity or natural gas

Answering a question on if there would be a price hike for electricity and natural gas, Minister Yildiz said, foreign exchange rate in the past one month increased 5.2 percent in Turkey due to international and national reasons.

He added, this situation reflected seriously onto the energy costs and underscored, "For the benefit of our citizens, either natural gas or electricity, we do not see any changes in their prices."