Russian rhetoric in July 2022: Russia is threatening everyone, but in fact, it is seeking a ceasefire, truce with Ukraine, and negotiations with the USA. Why? 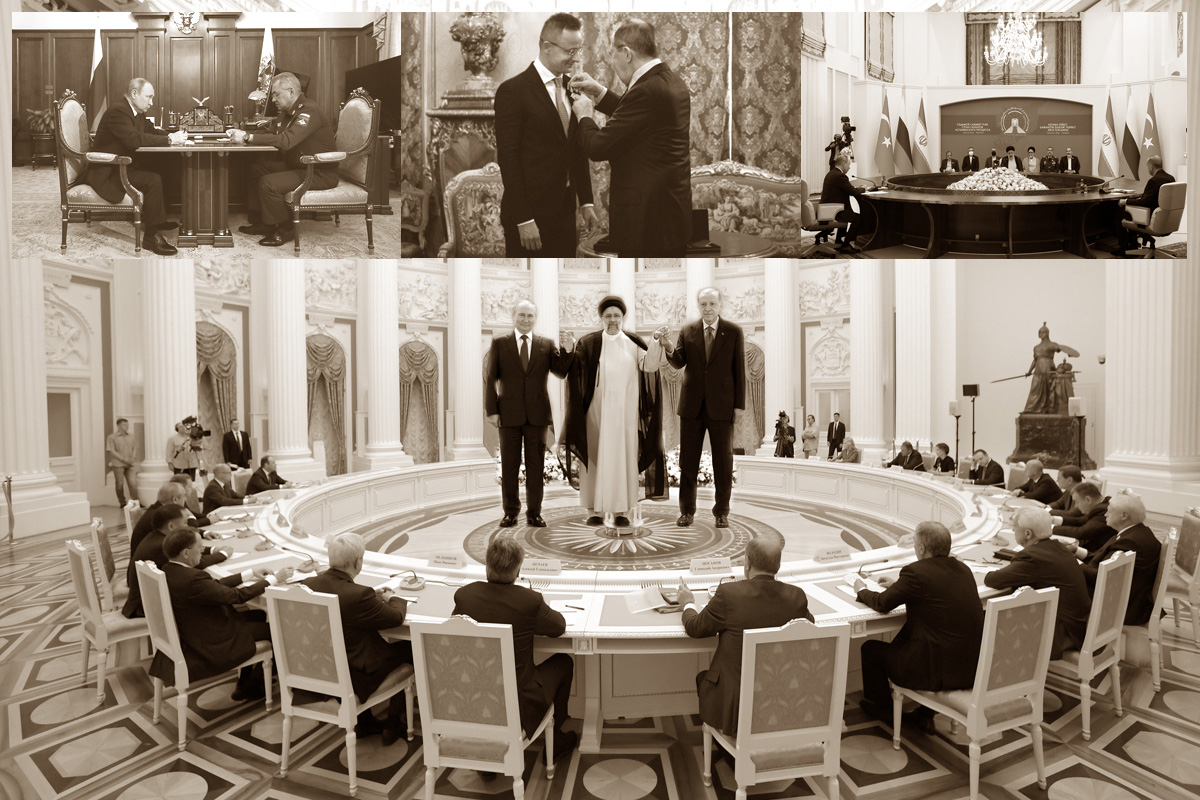 The results of our regular monitoring of the rhetoric of Russia’s highest officials in July 2022 suggest that despite the intensification of their usual aggressive rhetoric, in reality, the Russian Federation is fervently seeking a ceasefire, truce, and negotiations. Why? It’s not only about Ukraine.

The military factors of this are obvious. The Kremlin's hope to gain time to “formalise” the annexation of the newly occupied territories of Ukraine is just as obvious. The attempt to include a ceasefire, i.e. a truce, into the grain deal during the Istanbul meetings failed because of Ukraine's position. Annoyance at this failure resulted in a missile attack on the Odesa port. According to the perverted logic of the Russian Federation, this is "forcing a ceasefire.” Russian provocations will be the same if and when ships with Ukrainian grain leave Ukrainian ports.

However, the point is not so much about this.

Russia began a strategic shift towards the South and East - Asia and Africa. The Russian Federation understood and accepted the fact that it had already been "excluded from Europe." And it no longer identifies itself with Europe and the Western world and - this is the most important thing - is not going to return there. This shift will take time - both in politics and in the reorganisation of economic logistics. Moreover, Russia has also understood that there will be no lifting of sanctions. And in order to have this time, negotiations and a ceasefire are needed.

The Russian Federation already knows that coercing Ukraine into talks and a ceasefire with missiles will not work. Therefore, hopes that the gas coercion mechanism will work in Europe, which - in Kremlin's dreams - is the "weak link" and should force Ukraine into a ceasefire, came to the fore. And since the EU (according to the Kremlin's beliefs) is completely controlled by the USA, the final addressee of these hopes for negotiations becomes clear. Especially as the "theoretical" foundation of the Russian vision of a new division of the world has not changed since the well-known proposals to the USA and NATO of December 2021.

Russia will certainly try to use the domestic political situation in Europe and the USA for this purpose and to increase the potential dissatisfaction of European voters, using all kinds of Russia’s favourite economic dirty tricks. In order to weaken the unity of the EU and NATO, the Russian Federation will attempt to take advantage of the leaders of Hungary and Turkey with their simultaneous calls for the West to change its attitude towards Putin. At the same time, Russia will try to strengthen the potential and influence of BRICS and the SCO and intensify the anti-Western campaign in Africa and Asia.

To win the Great War of the 21st century, it is necessary to analyse and evaluate modern events and the place of Ukraine and Western civilization in the broader global context. And, of course, to prepare for the Russian blackmail of Europe.

Despite intensifying aggressive rhetoric in July 2022, Russia desperately needs a truce under any pretext to solve the following tasks.

The Russian Federation hopes to achieve these goals by resuming the negotiation process under any formal pretext and involving Ukraine and its Western partners in it. At this stage, Russia can temporarily be satisfied with the existing seizure of Ukrainian territories.

Coercion to a "grain truce” with missiles is one of the available options, but not the only one.

The starting point of this tactic can be considered the meeting of Russian President Putin with Defence Minister Shoigu on 3 July and with the leaders of the State Duma factions on 7 July 2022.

In the first days of July, the Russian armed forces captured almost the entire Luhansk region, and Shoigu reported this to Putin on 3 July.

On 7 March 2022, during a meeting with the leaders of the State Duma factions, Putin announced two messages:

Against this background, three obvious subsequent reactions of Russian politicians are characteristic: 1) visits to all formations at the front, instructions to protect the civil infrastructure of the occupied territories from the strikes of long-range systems of the Ukrainian Armed Forces; 2) an increased number of statements that Kyiv is not interested in negotiations and has itself rejected them; 3) statements that in case of the resumption of negotiations, they will be held in new realities and under new conditions.

At the meeting on 7 July 2022, the leader of the Just Russia faction, Mironov, asked Putin to extend the simplified procedure for acquiring Russian citizenship to residents of the Kharkiv region (at that time, this procedure was extended to residents of the ORDLO, Zaporizhzhia, and Kherson regions). Putin answered more broadly. On 11 July 2022, he signed a decree on the simplified procedure for granting Russian citizenship to all citizens of Ukraine, regardless of their place of residence.

After that, Russian top speakers intensified their visits to the occupied Ukrainian territories. In the week between Putin's words and 15 July, the Minister of Defence, the Speaker of the State Duma, and the first deputy head of the Presidential Administration visited these territories.

On 16-20 July, the Minister of Defence of the Russian Federation made several trips to the front, inspecting the Centre, South, East, and West groups - that is, in fact, all those related to the war.

A part of the press release of Russia’s Ministry of Defence dated 16 July 2022 got a lot of media attention. It stated that Shoigu gave "necessary instructions to further intensify the actions of the formations in all operational areas.” Many interpreted this as an announcement of the intensification of offensive actions by Russian troops in Ukraine. However, in its entirety, this and other press releases from Shoigu's trips to the front give grounds for a different interpretation.

On the same days, the Kremlin’s spokesman declared that the time frame for the completion of the special operation was uncertain:

It can be assumed that, against this background, Shoigu's visits and his instructions to the troops to ensure the protection of civilians had several goals.

● To confirm and justify the Kremlin's propaganda version of the reasons for slowing down the offensive, which claims that the slow advance is allegedly due to the desire to avoid the destruction of civilian facilities and harm to the civilian population (and not the large losses of the headquarters and logistical infrastructure of the Russian Federation).

● To demonstrate the image of the Russian army as the defender of the newly occupied Ukrainian territories.

● To frighten Ukraine and its allies with a possible advance into new Ukrainian territories as one of the options for neutralising Ukrainian long-range systems.

Key assumption: Shoigu inspected the formations involved in the "special military operation" in order to determine a new front line, where the Russian Federation could now temporarily stop to take an operational pause or to "freeze" the hostilities later.

The activity of the Russian command may indicate not a further offensive, but a transition to defence. Not the intention to escalate hostilities and expand them "to the Dnipro river," but the priority protection of the already occupied areas and at the same time giving the opportunity to “legally formalise” the takeover of these territories.

The words about the need to ensure that Ukrainian Armed Forces’ long-range weapons don’t reach Donbas civil infrastructure are a signal of Russia’s intention to push the Armed Forces of Ukraine even further away from the edges of the currently occupied Ukrainian areas. Thus, the impossibility to reach these areas with rockets can be ensured by increasing the distance.

The Minister of Foreign Affairs of the Russian Federation, Lavrov, stated in an interview with the Russian mass media on 20 July 2022 that the geographical objectives of the operation will be expanded to new territories depending on the range of the Western weapons supplied to Ukraine.

Shoigu's demands that strikes on cities controlled by Russia in the Donbas should not be allowed, together with Lavrov's words about expanding the geography of the occupation depending on the power of the provided weapons, can indeed indicate the plans of the Russian Federation to intensify the offensive against new territories.

Most likely, these are the Kharkiv, Zaporizhzhya, and Dnipropetrovsk regions. It’s worth recalling the statements of Russian politicians about the possibility of territories joining the Russian Federation without seceding from their current states.

Deputy Head of the Security Council of the Russian Federation Dmitry Medvedev picked up on the message about the need to expand the territory of occupation. On 21 July, Medvedev visited the 1602nd military hospital of the Russian Ministry of Defence in Rostov Oblast, where participants of the "special military operation" were being treated, and also talked with refugees from the ORDLO.

However, we assume that the aforementioned statements about the expansion of the geography of occupation, in today's state of the Russian army, are a bluff.

The purpose of this bluff is to try to prevent supplies to Ukraine of long-range systems with a radius twice as large as it has now. So to speak: we will leave you your own territories in exchange for rejection of weapons, which will allow you to liberate the territories we have already occupied.

Our main conclusion is that in July 2022, Russia still mainly demonstrated interest in negotiations in the well-known rhetorical way of denying their possibility. That is, Russian speakers insistently and synchronously declared zero chances of resuming negotiations and zero inclination to this on the Ukrainian side, but in fact, they very much want Ukraine to agree to this.

On 20 July 2022, both Putin and Lavrov reproached Kyiv and the West. While Putin referred to the lack of desire to negotiate on the part of the Ukrainian authorities, Lavrov accused the West of discouraging Ukraine from conducting negotiations at that time due to the weakness of Ukraine’s position and of encouraging continued resistance with the supply of weapons.

In this context, it is worth mentioning the Ukrainian report that the Russian Federation is trying to use the buildings of the Zaporizhzhya NPP to shelter military equipment. And American analysts from The Institute for the Study of War said that Putin could use nuclear threats to deter a Ukrainian counteroffensive in the annexed Kherson, Zaporizhzhia, Donetsk, and Luhansk regions.

Based on the above, one cannot ignore the fact that Russia has already set up a scenario for both "nuclear deterrence" of the expected Ukrainian offensive in the south and "nuclear inducement" for the EU to force Ukraine to negotiate. Russia’s already well-known gas blackmail of the EU in the context of the approaching winter heating period is also an instrument for inducing the EU to put pressure on Ukraine.

In order to weaken the unity of the EU and NATO, the Russian Federation will attempt to take advantage of the leaders of Hungary and Turkey with their simultaneous calls for the West to change its attitude towards Putin.

On 19 July 2022, the Russian mass media and Telegram channels published the results of an allegedly closed poll by the Russian Public Opinion Research Centre (VTsIOM), which were summed up very succinctly:

There is no point in trusting the reliability of Russian statistics. Most likely, the publication of such "statistics" indicates the beginning of the preparation of Russian society for a pause in the "victorious war," which has dragged on for almost six months with no end in sight.

Editorial note: to avoid the promotion of media outlets under the Ukrainian and international sanctions, the Monitoring Group does not provide hyperlinks to the quotes. This list of primary sources is available in the editorial office on request.