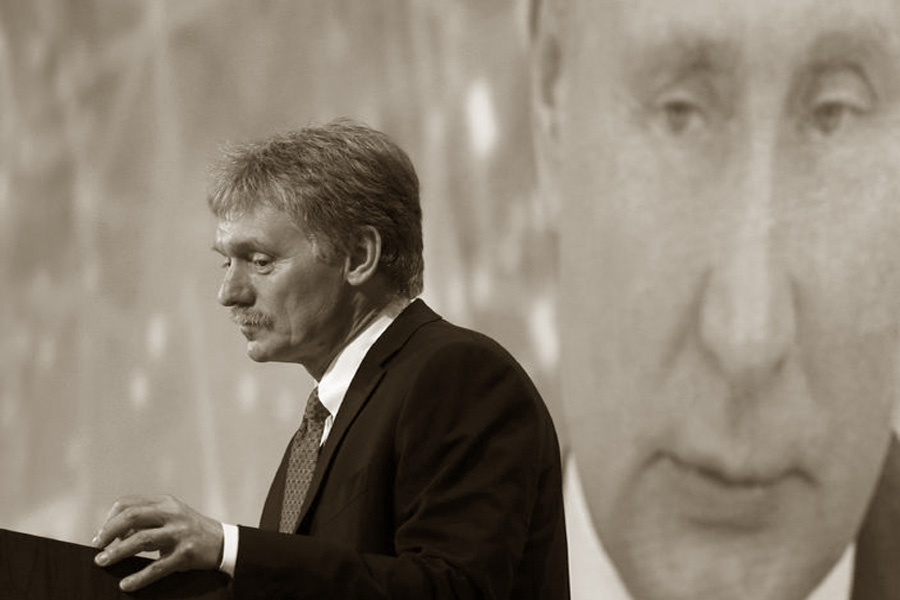 The joint monitoring group of the BlackSeaNews and the Black Sea Institute for Strategic Studies has been continuously following the rhetoric of various Russian politicians since the fall of 2021. This time, we will review that of Kremlin’s speaker Dmitry Peskov.

The reasons for the choice are Peskov being the main source of the «theme lists» – de-facto detailed propaganda instructions that set the necessary rhetoric framework for the rest of Russia’s key speaker pool, as is the case in all totalitarian states, and that in Peskov’s case, his words are almost always indicative of the upcoming Kremlin’s actions.

If in May he made 17 speeches total, between June 1-26 he has already made 21. Besides, over the course of the month, his speech frequency kept growing, reaching 7 in the last week, that is almost doubling comparing to the beginning of the month. He also tried to diversify the media channels, giving extensive interviews to both Russian and American media outlets.

Earlier, Peskov's peak intensity fell on the week preceding the announcement of the Russian ultimatum1 – 10 speeches between December 6-12, 2021 – Russia's recognition of the so-called «DPR» and «LPR» and a large-scale Russian invasion of Ukraine – 12 speeches between February 14-21, 2022.

There were 8 speeches during each of the February 21-27 and February 28-March 6, 2022 weeks – the first two weeks of the large-scale Russian invasion of Ukraine – and March 28-April 3, 2022 – the week of the intensification of the Ukrainian-Russian negotiation process in Turkey at the time when the RF Armed Forces were pushed back from Kyiv and Ukraine’s northern regions.

The highlights of Peskov's latest June speeches have been his systematic statements on the absorption of the newly occupied Ukrainian territories. While the topic had already held a prominent place in his May rhetoric, by June, Peskov started paying regular attention to it, musing about its various aspects on a weekly basis.

It was in June 2022 that the Kremlin speaker articulated Russia's claims not only to the Kherson region, but also to the Zaporizhzhia and Kharkiv regions, at least to parts thereof.

On June 1, 2022, he mentioned the Kherson region and also, practically for the first time, the Zaporizhzhia region as candidates for a soon secession from Ukraine, meanwhile, placing all the responsibility for their future on the free will of local residents – a tried and true Russian recipe for the annexation of neighboring territories.

June 1, 2022: «We have repeatedly said that people must choose their own future. It is the residents of two states – LPR and DPR – as well as of Zaporozhye and Kherson region, who have to make decisions about their future. And we have no doubt that they will make the best one».

A week later, on June 7, 2022, Peskov refuted the statement on the region’s takeover.

The gist of the statement by Izvestia, citing Russian sources, was that in the event the negotiations between Russia and Ukraine resumed, the status of the Kherson and Zaporizhzhia regions wouldn’t be up for discussion because allegedly «the vast majority of their residents support Russia».

Peskov’s brief reply on the matter «no, it's not true» was picked up by the Russian media as «Kremlin's speaker called the info that the Russian side wouldn’t discuss the status of Kherson and Zaporozhye regions with Ukraine incorrect».

The verbal ping-pong was meant to have the readers believe that the issues of Kherson and Zaporizhzhia regions were up for negotiation.

«The status of the Kherson and some parts of the Kharkiv region depends on the will of the local population. Russia's number one goal is to protect the people of Donetsk and Luhansk from those who fire on Donbass and kill civilians. As for other territories and regions of Ukraine, the more our military clears the territory from the nationalist battalions, the more people declare their desire to end their future affiliation with the Kyiv regime».

That is, June 2022 was the first time when a top Russian official voiced an intention to create a quasi-state entity in the Kharkiv region.

Also, it was for the first time that a Kremlin representative implied that in order to form those quasi-republics, it was enough for Russia to control just several areas, but not necessarily the regional centers.

A similar situation has in fact, developed in the Zaporizhzhia region, where unable to capture Zaporizhzhia, the Russians have established a «temporary regional capital» in Melitopol.

In that context, it’s worth noting the words of another Russian speaker back in May. On May 13, a Russian MP, Daniil Besarabov, announced a new mechanism for the territories annexation, albeit without naming them:

«The Constitution of the Russian Federation does not prohibit the accession to Russia of a new entity that is part of another state – al that’s needed is to draft an international treaty and submit it to the State Duma for ratification».

So far, the scheme has not been publically articulated by Russia’s top officials, but for the time being, may well be considered behind the scenes.

The latest Peskov's important statement on Zaporizhzhia was made on June 23, 2022.

The day before, the Russian media published the appeal of the collaborator Vladimir Rogov4 to the Russian Federation to remove the border between Russia and Ukraine in the occupied part of the Zaporizhzhia region:

Rogov. 22.06.2022. «For us, the border with Russia is worse than the Berlin Wall for Germans... Depending on the region, in Ukraine, 73-85 percent of residents have relatives in Russia. Consequently, there should be no border… We are no worse than the Germans. Southern regions of Ukraine are historically Russian lands. We are Russian people who were forcibly pulled apart by three separatists in Belovezhskaya Pushcha in 1991, who had first destroyed the USSR and then began to build an ideological wall, that has now fallen. Our reunification with Russia is inevitable, there should be no borders between us».

To that end, the phrasing of Peskov’s reply to the «abolition of borders» question at the June 23 briefing – «obviously, that’s not an appropriate way of rising the question. There is no talk of it yet» – is more than very telling.

We shouldn’t, however, be mislead by Peskov's seemingly denying statements, since earlier, similar ones were made in regard to the occupied «LDNR» while Russia was already in the process of recognizing them.

In mid-January 2022, the notorious CPRF submitted to the Duma a draft appeal to the president regarding the recognition of the «LDNR.» At the time, Peskov's statements looked as follows:

on January 20, 2022 – that the Kremlin wouldn’t comment on it until it is considered by the Duma.

on January 21, 2022 – that any «LDNR»-related steps that provoked tension should be avoided.

At the time, the Duma postponed the «recognition» issue for a month – until February 2022. But the chronology of the Russian statements clearly shows that in mid-January 2021, the speakers actually denied the possibility that such an appeal could be approved or that Putin would even react to it at all. We all know the ending, though – a lightning-fast Duma approval and Putin’s signing of the decree, then the approval by the Federation Council and expansion of the Russian aggression into new Ukrainian territories.

At present, in regard to the situation with the occupied districts of Kherson, Kharkiv, and Zaporizhzhia regions, the Russian rhetoric is dangerously similar to that of the «LDNR» recognition scheme. First, public distancing, faked misunderstanding and denial of the plausibility, at least for the time being, followed by the swift recognition and ensuing hostilities.

«In the current circumstances, it is impossible to conduct a referendum on the Donbass accession to the Russian Federation, as the security of the republics must first be ensured» – D. Peskov on June 2, 2022.

«At this point, the timing of possible referendums in the Donbass and a number of liberated regions of Ukraine is unclear» – D. Peskov on June 3, 2022.

In June 2022, Putin's speaker’s rhetoric on the absorption of Kherson region, Zaporizhzhia and Kharkiv regions has clearly intensified.

In it, with each statement, a question of the accession of the parts of Zaporizhzhia region has been consistently raised at least one level up. At first, Peskov stated that it’s «the people, who will decide», later announced that the issue could be a subject of the Ukraine-Russia negotiations, and finally, talked of an «interstate border between Ukraine and the Russian Federation» in the Zaporizhzhia region.

In the event the RF establishes only the chunks of the «republics», i.e., that only parts of the oblast areas are occupied, it will act along the lines of the «LDNR» recognition scenario, namely that initially, the quasi-states will be limited to the actually occupied territory, then Russia will recognize the «new republics» within the administrative borders of their respective oblasts, and finally, try to expand the de-facto occupation to match the declared boundaries.

We believe that the Russian Federation is already preparing to legally recognize the newly occupied areas with the goal of establishing control of the presently unoccupied areas of the Kherson, Zaporizhzhia and Kharkiv oblasts in the future.

For now, the collaborators announce pseudo-referendums for the fall of 2022. But the previous experience suggests that Russia may sharply speed up the process of legally framing the occupation in the coming weeks already.

Notably, technical steps towards the integration of the occupied regions into Russia have been actively made since May, even before the opening of the Russian bank branches there.

About the only thing that holds Russia back from conducting the pseudo-referendums immediately, is the unfinished occupation of the regions that would extend its control up to their administrative borders, that is, the fight of the AFU and resistance forces in those areas, as well as the attitude of the local population that makes it impossible to stage the required picture.

In that regard, the June 1, 2022 statement by the head of the international committee of the State Duma, a member of the negotiating group with Ukraine and the leader of the Liberal Democratic Party, Leonid Slutsky, is indicative that the annexation «referendums» can be held as early as July:

«I do not rule out that this may happen as early as July, I won’t guess where it will happen, but I assume that the liberated territories will hold a referendum more or less simultaneously, which would be logical. I expect that this can happen already in July».

Meanwhile, the TASS state news agency did not hesitate to actually name the regions, stating that «referendums on the entry of the DPR, LPR, Kherson region and Zaporizhzhia into the Russian Federation may be held in the summer at roughly the same time».

However, the RF may dare to swallow at once all the territories occupied by its army «on the request of the regions’ leaders».

This is probably what Peskov alluded to on May 26, following Kissinger's famous statement about the need for concessions from Ukraine:

To that end, in the coming weeks, the RF will likely push for the «ceasefire» and «truce» in order to legalize the formation, recognition and subsequent annexation of the newly occupied territories. But prior to that, it may well launch an even more massive demonstrative missile attack on Ukraine.

Editorial note: to avoid the promotion of media outlets under the Ukrainian and international sanctions, the Monitoring Group does not provide hyperlinks to the quotes. This list of primary sources is available in the editorial office on request.