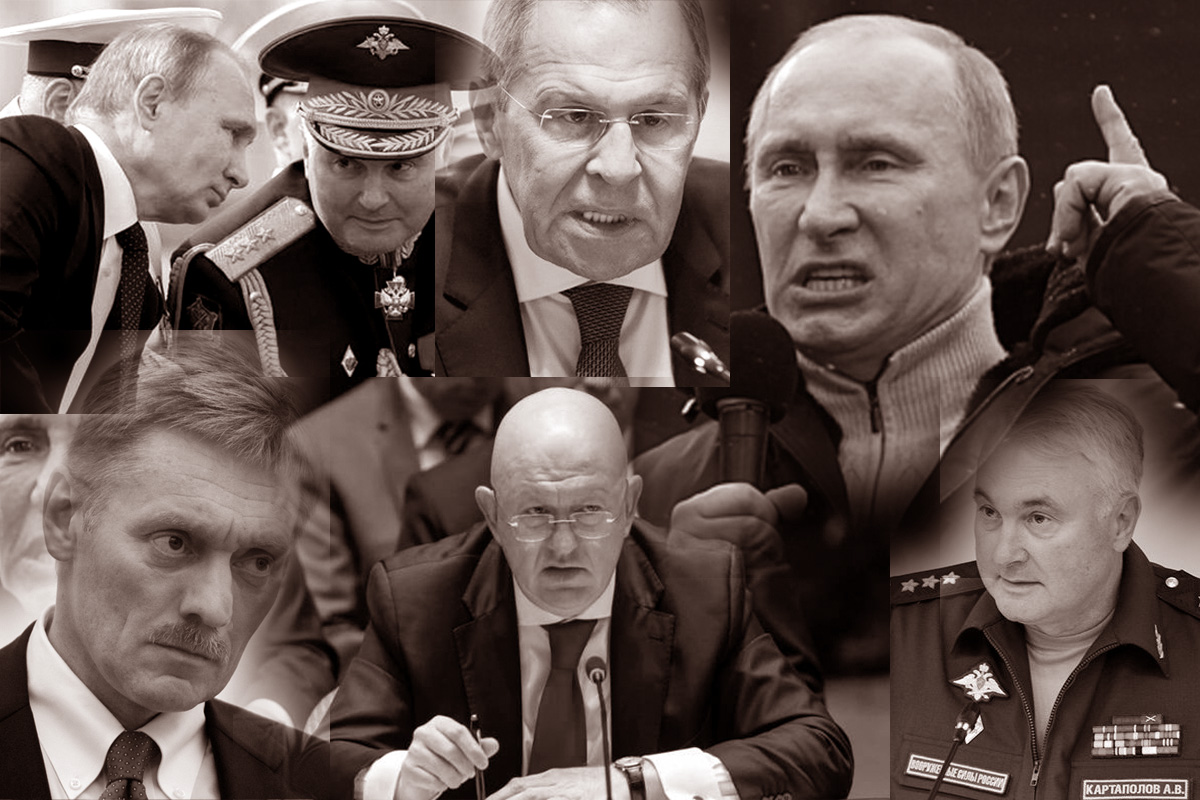 The possibility of Russia’s missile strikes on "decision-making centres" in Ukraine was discussed for the first time since 24 February 2022 in the Russian Ministry of Defence almost two months ago.

In two months, the Russian Federation has significantly "updated" the pretexts for striking at decision-making centres. Note that strikes on decision-making centres in response to "strikes on Russian border areas by Ukraine" in April-May 2022 were not carried out - Russia has failed to create at least minimally convincing evidence of "strikes" even for its own population.

Given that the majority of Russian society is looking forward to strikes on Kyiv, it is highly probable that a plan to launch a massive missile strike on Ukraine's public facilities in the capital has long been developed and is just awaiting Putin's order. As well as the plan of strikes on the city’s infrastructure of civilian life. At present, it is difficult to predict what factor or event may trigger the issuing of this order.

The possibility of Russia’s missile strikes on "decision-making centres" in Ukraine was discussed for the first time since 24 February 2022 in the Russian Ministry of Defence almost two months ago.

20 February 2019. In an address to the Russian Federal Assembly, President Putin warned the United States of a possible strike on "decision-making centres" in connection with the hypothetical possibility of the US deploying medium-range missiles in Europe.

On 13 April 2022, this strategy of verbal threats got a new life. The head of the Russian Defence Ministry's information and mass communications department and official spokesman for the Russian Defence Ministry, General Igor Konashenkov, said that if Ukraine continued to carry out sabotage operations and fire on Russia's border areas,* Russia would strike at decision-making centres.

* In March-May 2022, the Russian media repeatedly reported on "strikes on the border settlements of the Bryansk and Kursk oblasts by Ukraine." All these reports were published mainly without photo evidence or with photos of "Ukrainian shell fragments and destruction" without the possibility of geographical identification of the place. This has led to the perception of these messages solely as provocations by the Russian Federation itself in order to create the pretext for "strikes at decision-making centres.”

26 April 2022. The Russian Defence Ministry issued an official statement in response to the words of the British Parliamentary Under-Secretary of State for the Armed Forces, James Heappey, in an interview with Times Radio (at that time the supply of British weapons to Ukraine was being actively discussed), where he said: “I think it is certainly the case that things that the international community are now providing to Ukraine have the range to be used over the borders, but that's not necessarily a problem.”

On 30 May - 2 June 2022, the topic of striking at decision-making centres was raised again after the information appeared that the United States was planning to supply HIMARS long-range rocket systems to Ukraine.

However, this time it was voiced not by generals from the Russian Defence Ministry, but by representatives of Russia's top political leadership - the ex-president, ex-prime minister, and now Deputy Chairman of the Security Council of the Russian Federation and Chairman of the ruling United Russia party Medvedev, the spokesman for the Russian president Peskov, Deputy Foreign Minister Ryabkov, as well as a Russian military political scientist, associate professor of political science and sociology at the Plekhanov Russian University of Economics Alexander Perendzhiev.

On 5 June 2022, Putin raised this issue in an interview with the Russia TV channel. He further clarified the topic of missile ranges and expanded considerably the terminology regarding the targets of future missile strikes.

On 6 June 2022, General Kartapolov (the Chairman of the State Duma Defence Committee) clarified the message delivered by Putin the day before. At the same time, he expanded the range of possible targets for attacks to include railway stations, airports, bridges, etc .:

On 6 June 2022, for the first time, Russian Foreign Minister Lavrov linked, and Russian Permanent Representative to the UN Nebenzya specified Lavrov's formula on the connection between the supply of long-range weapons to Ukraine, capable of reaching targets in Russia, and further seizure of Ukrainian territory.

In recent weeks, the Russian Federation has "updated" the pretexts for striking at decision-making centres.

On 13 April 2022, the Russian Defence Ministry called "the strikes on Russian territories along the state border with Ukraine and sabotage operations in Russian border areas" the reason for striking at decision-making centres.

Within two weeks of that date, the Russian media and law-enforcement authorities reported at least four new cases of "strikes and sabotage":

However, in April-May 2022, strikes on decision-making centres in response to "strikes on Russian border areas by Ukraine" were not carried out... This confirms the hypothesis of the impossibility of creating at least minimally convincing evidence of "strikes by Ukraine."

At the end of April, the pretext provided by Russia for strikes on decision-making centres changed - it was the probable use by Ukraine of long-range Western weapons against Russian territory (initially the trigger was the supply of British weapons, and in late May - of American weapons).

Thus, strange as it may seem, Putin has, in fact, significantly narrowed the boundaries of the imagination of his associates. Most likely, they were very surprised when he clearly outlined the reasons for missile strikes on decision-making centres. Simply put, he stressed that the supply of HIMARS systems is in itself a replacement for similar Soviet MLRS, except for their use with missiles having a range of 300 km and above.

Reference: 300 km is the distance from the Black Sea coast in the Odesa region to occupied Sevastopol, where the main base of the Black Sea Fleet of the Russian Federation is located; from the Ukrainian city of Mykolayiv to Simferopol - the capital of occupied Crimea; from the city of Zaporizhzhia to the Kerch Bridge, which carries a huge Russian military traffic through the Crimean Peninsula to places of active hostilities in the Kherson region or to Rostov-on-Don, where the headquarters of the Southern Military District of the Russian Federation are located.

Of course, the world is already accustomed to the fact that the words of Russian leaders cannot be trusted. Putin's words could have pursued the purpose of lulling the world and might have been a "cover-up operation" for his real intentions.

It should be emphasised that in the conditions when the majority of Russian society has a militarised imperial mentality and is looking forward to strikes on Kyiv, it is highly probable that a plan to launch a massive missile strike on Ukraine's public facilities in the capital has long been developed and is just awaiting Putin's order.
As well as the plan of strikes on the city’s infrastructure of civilian life. At present, it is difficult to predict what factor or event may trigger the issuing of this order.

1) Address by Russian President Vladimir Putin to the Federal Assembly, 20 February 2019.
2) Release on the results of the briefing of the official representative of the Russian Ministry of Defence Igor Konashenkov on 13 April 2022.
3) Statement of the Ministry of Defence of the Russian Federation, published on 26 April 2022 on departmental social media platforms.
4) Dmitry Medvedev's post in a personal Telegram channel.
5) Briefing of the Kremlin’s speaker D. Peskov, published by Interfax on 1 June 2022.
6) S.Ryabkov’s interview with the RIA-Novosti agency on 1 June 2022.
7) O. Perendzhiev's comment to the online publication Lenta.ru, 1 June 2022.
8) Dmitry Medvedev’s interview with the Al Jazeera TV channel, 2 June 2022.
9) D. Peskov’s comment to journalists, TASS, 2 June 2022.
10) Vladimir Putin's interview with the Russia TV channel on 3 May 2022, the full version was published on 5 June 2022.
11) A. Kartapolov's comment to journalists, published by the RIA-Novosti agency on 6 June 2022.
12) S. Lavrov’s video address, published on social media platforms of the Ministry of Foreign Affairs of the Russian Federation on 06 June 2022.
13) V. Nebenzya's speech in the UN Security Council meeting on 6 June 2022.
14) Survey of the EADaily online publication.