The strange substance that emerged over the week on many southern Bulgarian Black Sea beaches is palm oil, said Bulgarian environmental inspection authorities. 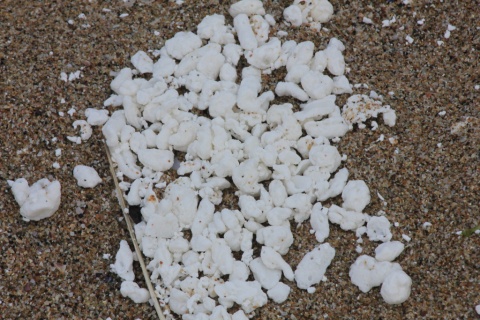 Samples of sea water taken at various locations showed no traces of crude oil or its products, added the Burgas RIOKOZ.

Initial repors of the mysterious substance said it emitted a smell of oil, with some speculating it could have been used to neutralize an undisclosed oil spill.

According to RIOKOZ, the substance is not dangerous for people's health.

Environmental authorities added that there are no land locations from where it could have been thrown into the see.

That leaves open the option that the substance might have been discharged by a ship, in which case the incident falls in the competence of maritime authorities, added RIOKOZ Burgas.

The environmental unit said it made an analysis of the white granules found on five of the affected beaches - at Lozenets, Koral, Varvara, Arapya and the mouth of the Veleka River.