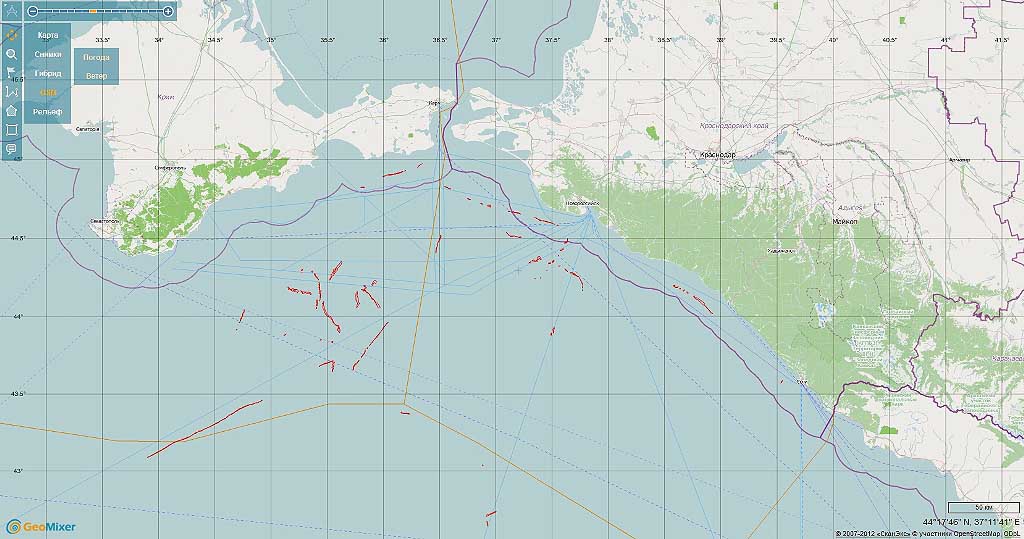 Integrated map of ship’s spills detected in early October 2012 in north-eastern parts of the Black Sea. Map is provided by RDC ScanEx

In the course of satellite radar-locating monitoring of the Black Sea perfomed by RDCScanEx for the administration of Novorossiysk sea port, the large sized ship source slick pollution was detected in the Russian and Ukrainian sectors of the Black Sea in September-October 2012. With the help of automatic vessel identification system (AIS) we managed to identify the ships connected with pollution.

Shape, location and characteristics of sleek fields allow to state that their formation was the result of ship discharges.

In particular, sleek fields have line-type shape which prompts that discharges were dumped during a ship’s motion; they are frequently fragmented and located on parallel courses due to several stages of operations’ performance.

And, lastly, these operations, being aimed at burden sharing, periodically take place on the Ukrainian and Russian sectors’ border. In a general way, these indications allow to interpret these slick pollution formations (with the area of dozens of square kilometers) as ship discharges. 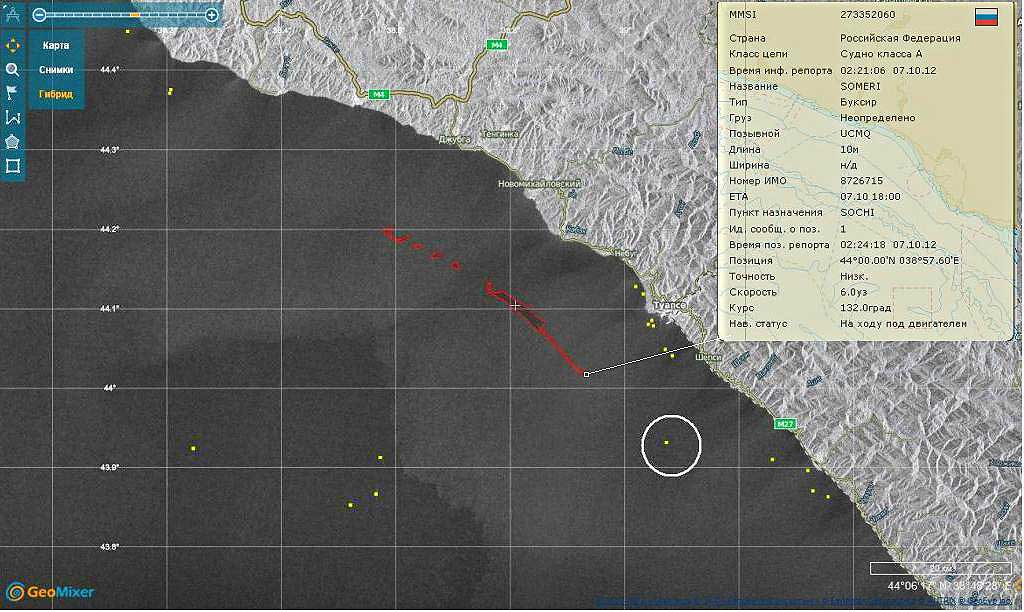 The sea tug SOMERI (Russian-flag vessel), heading 132 ° to Sochi port, with 6 knots speed, turned out to be art and part in the incident of October 7, 2012. Inspection check of the tow in the Sochi seaport confirmed indirectly vessel’s involvement in unauthorized dumping of about 1 cu m of oil sludge.

SOMERI – 25-year old, Yugoslavian built, Russian tug is well-known in ports of the Black Sea. And not only in Tuapse or Sochi, but also in Varna, Mariupol, Sulina. 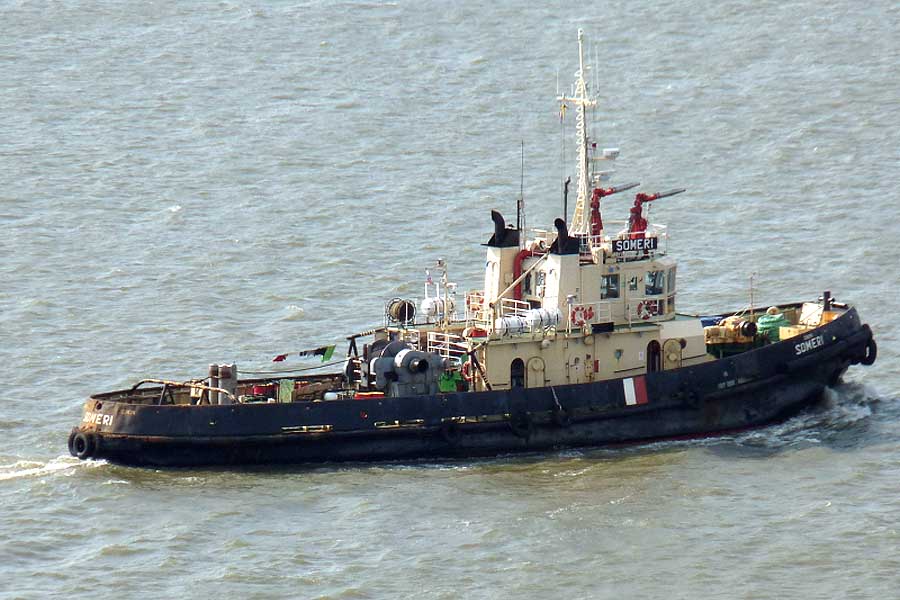 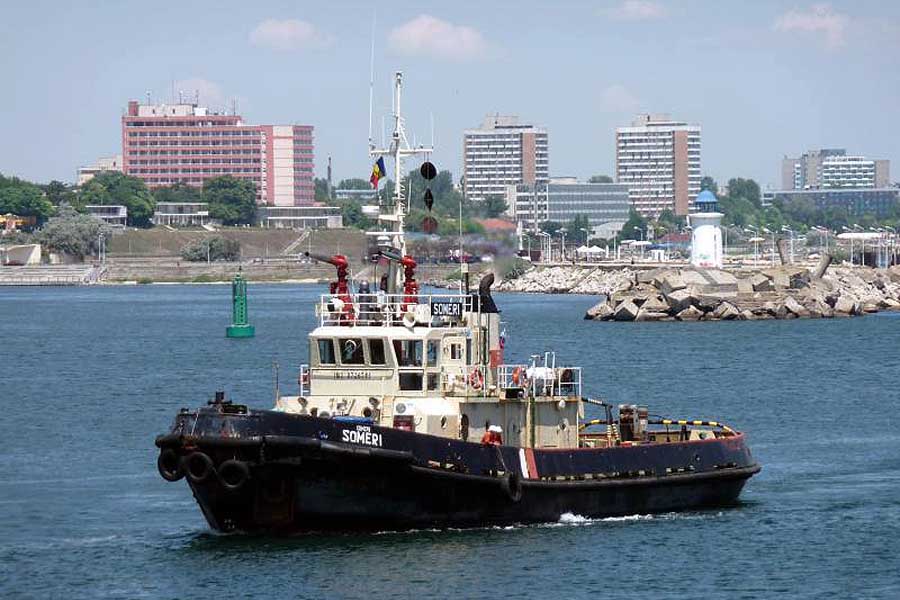 According to the Russian Marine Registry of Shipping, the tug boat’s home port is Astrakhan, the owner is Reka-More Shipping Company Ltd from Rostov-on-Don. 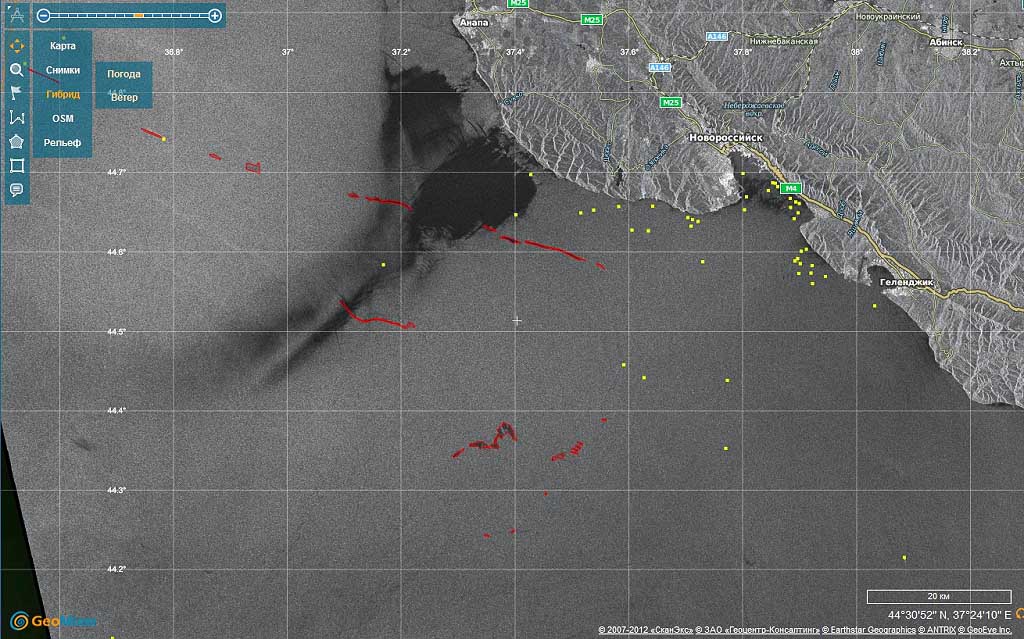 Ship spills detected by RLI Radarsat-1 on 9.09.2012, 15:12 UTC in Russian sector of the Black Sea, including territorial waters of Russian Federation (shortest distance to the coast is 9,85 km). (c) MDA, «ScanEx»

Incident of September September 19, 2012 was analyzed more particularly with the help of professionals from “ASP Novorossiysk” (Administration of sea port Novorossisk).

According to the data of the Novorossiysk Marine Rescue Coordination Center in the specified coordinates at the moment close to the time of space imagery there were the following most probable sources of the spill origin: motor ship CRYSTAL SUN (Flag: Cambodia, Built: 1977), which left the port of Novorossiysk after being loaded with cement; motor ship DREAM TRUE (Flag: Panama, Built: 1983), which arrived at Novorossiysk port to be loaded with timber. 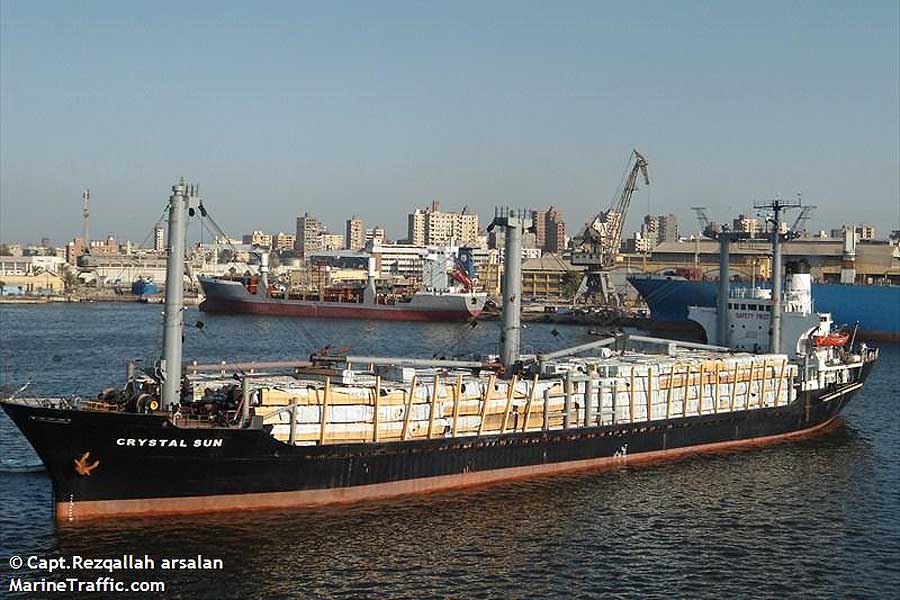 Within 35 years this, owned by Syrian company, bulk carrier has often changed hands as well as 10 names. 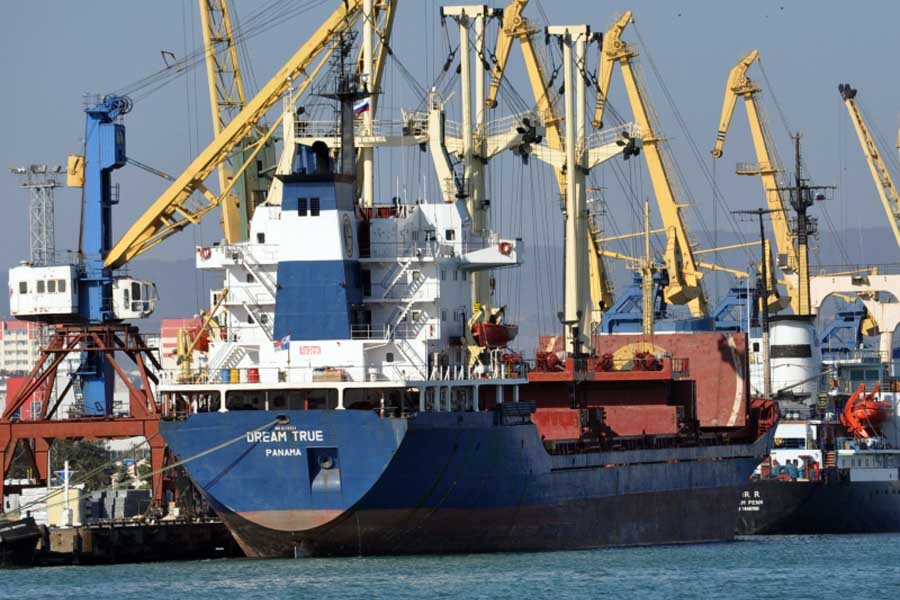 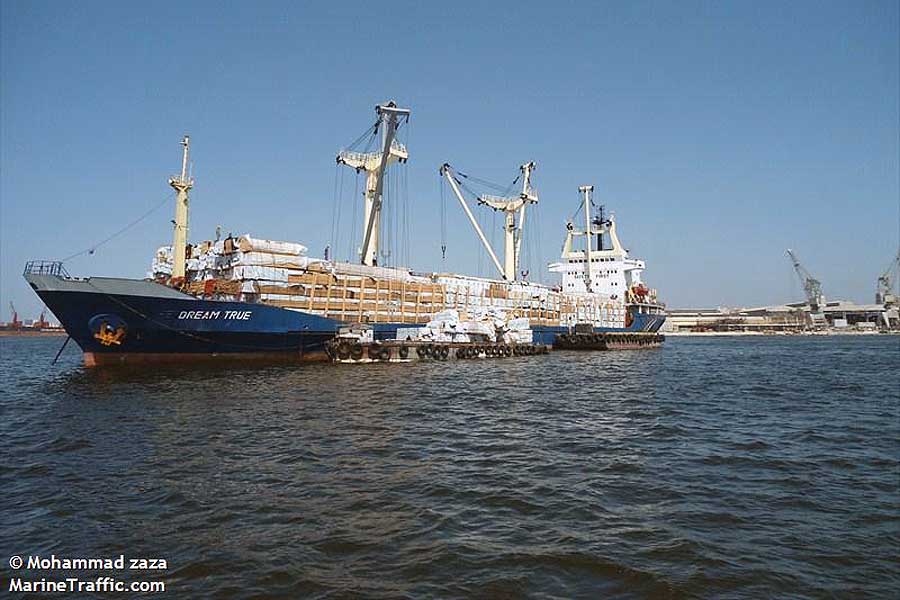 This bulk carrier is owned by a shipping company from Lebanon (Beirut) and in the course of 30 years has changed about 10 names. During the last half-year this bulk carrier is regularly in service between the ports of Novorossiysk, Alexandria (Egypt) and Tartus (Syria).

The other ScanEx RDC maps show ship's discharges in the Ukrainian sector of the Black Sea on September 26 and 29, 2012.

Regarding the case of September 26, 2012 the Editorial Board of BSNews decided to carry out independent experiments, using possibilities of our old partners –blacksea.sytes.net web portal.

Here are the results:

Thus, the spill, detected by ScanEx to the south-east of Yalta on 26.09.2012, 03:48 UTC (we used colored dotted figures of circle and ellipses to mark the characteristic areas): 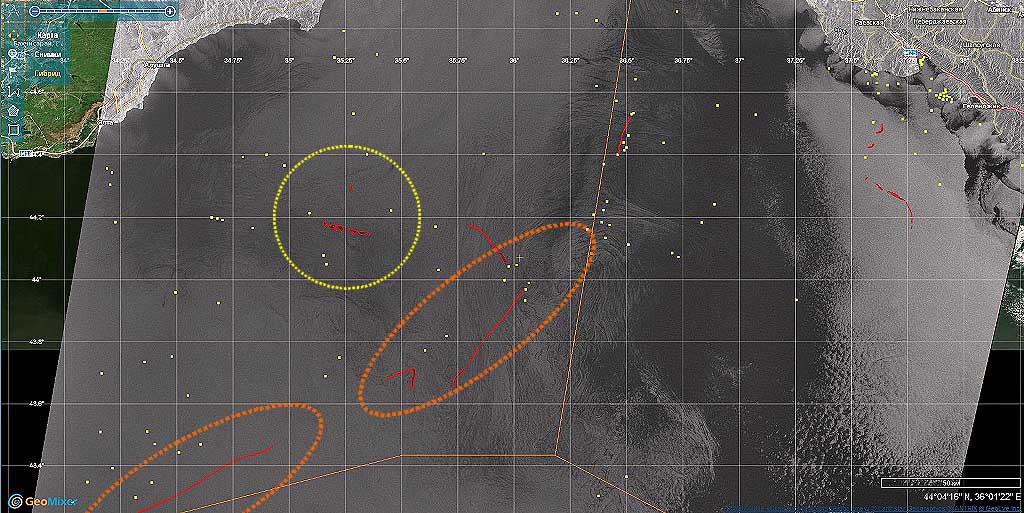 Using options of the web-portal blacksea.sytes.net. we “worked backward” in order to see what ships were in this area of the Black Sea on specified by ScanEx date and time: 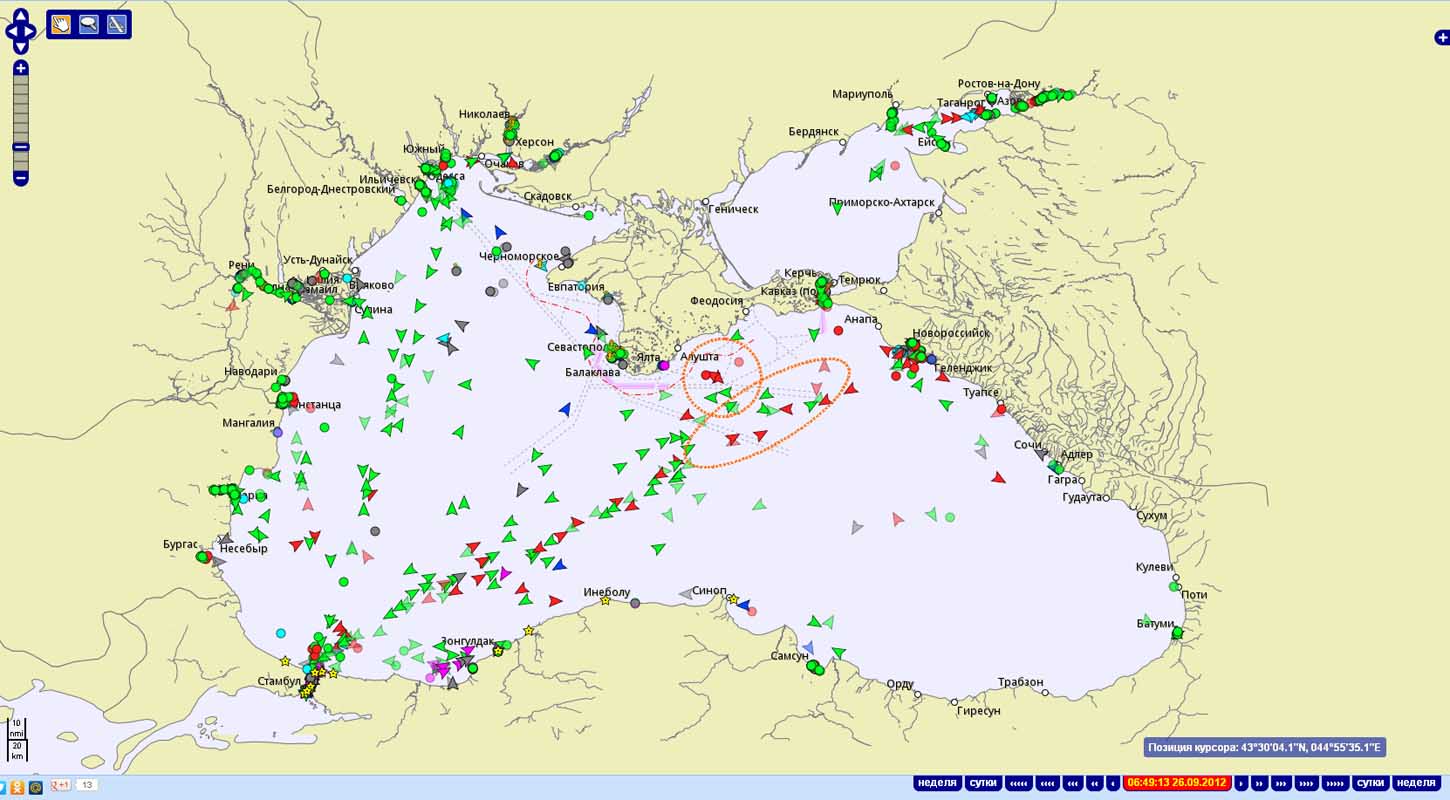 We have to note at once that in the ellipse-marked areas, there is the “through route” from Rostov, Azov, the Kerch Strait and Novorossiysk to the Bosporus and back. It is extremely difficult to tell unequivocally what vessel was the source of the sea pollution – hundreds of vessels pass through that area within 24 hours, while almost each 3rd of them is a tanker...

But it was slightly easier to hypothesize regarding the area, marked with a circle.

Well, judge for yourself: 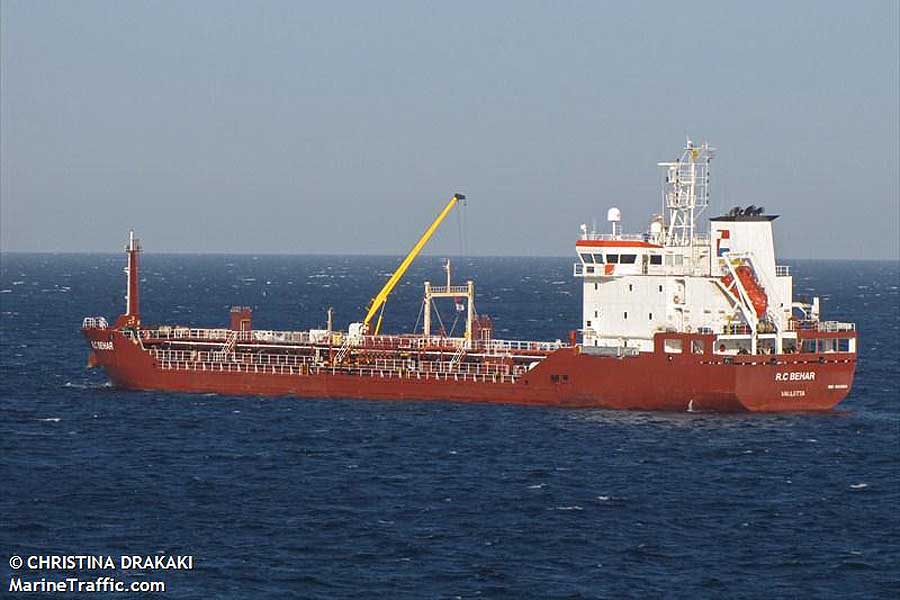 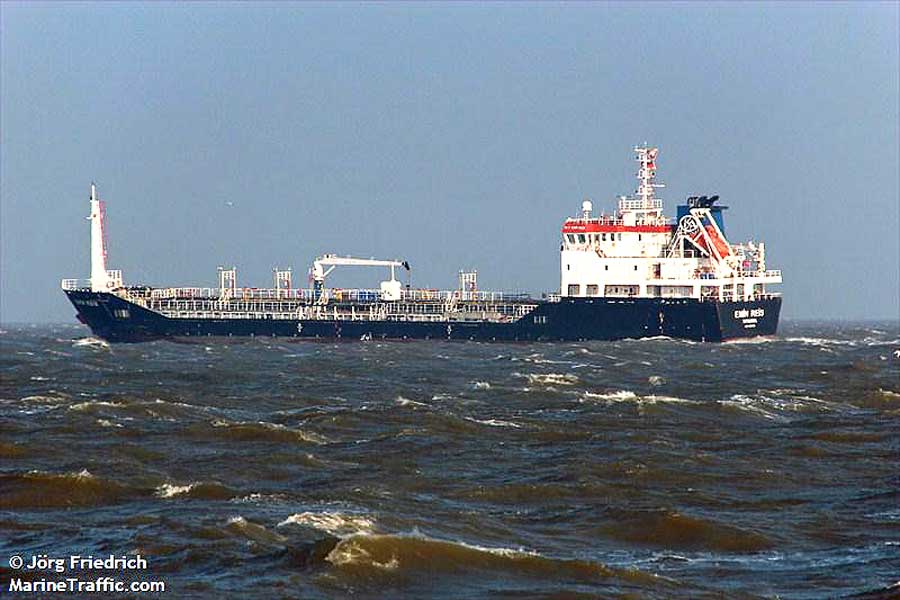 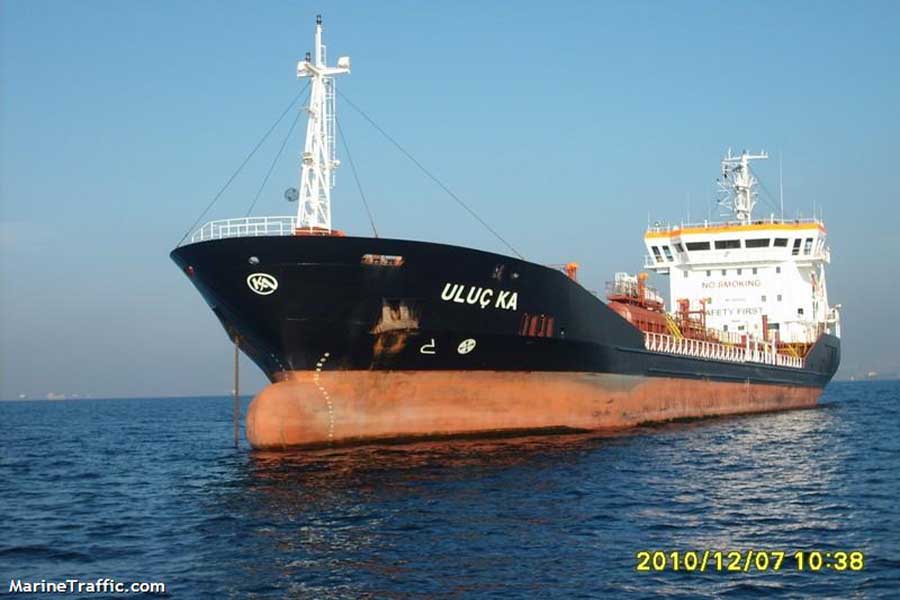 Still, not that far away – a little bit to north-east – there was another tanker: 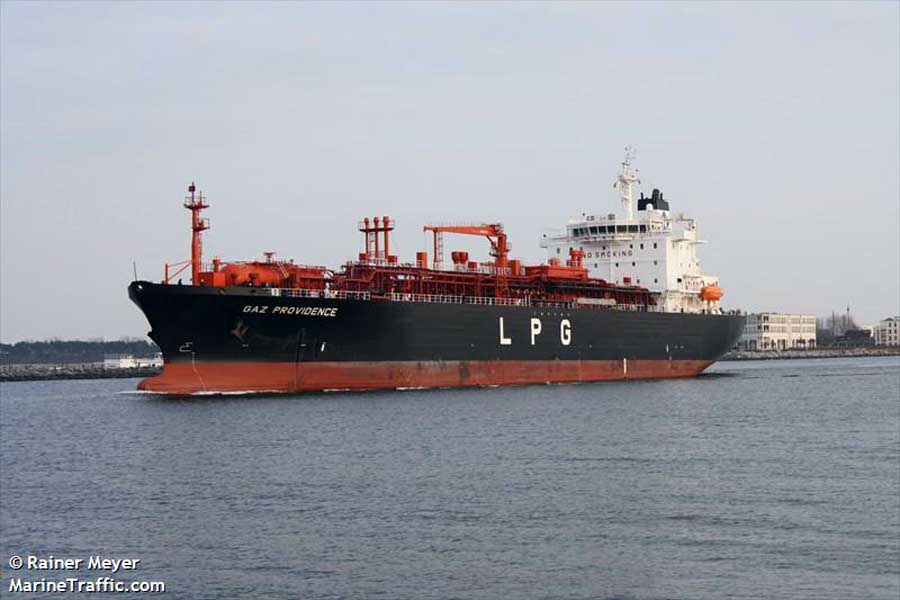 Let's explain, why these ships made us to hypothesize or nominate a version regarding their possible involvement in pollution.

First, all of them fall into the category of modern universal tankers which can carry not only oil, but after the required tanks’ washing - any other liquids as well. In order for a tanker not to make an unladen journey for oil to the ports of Azov, Rostov, Tuapse, Novorossiysk, Feodosiya or to the Kerch Strait, they should be loaded with something. For example, with palm-oil.

And after unloading of palm-oil, it is necessary to wash out tanks... We, naturally, cannot insist on anything or accuse anyone. But, still look, for example, at the intriguing manipulations performed by the RC BEHAR tanker :

This is the way how route of the tanker RC BEHAR looks in close-up: 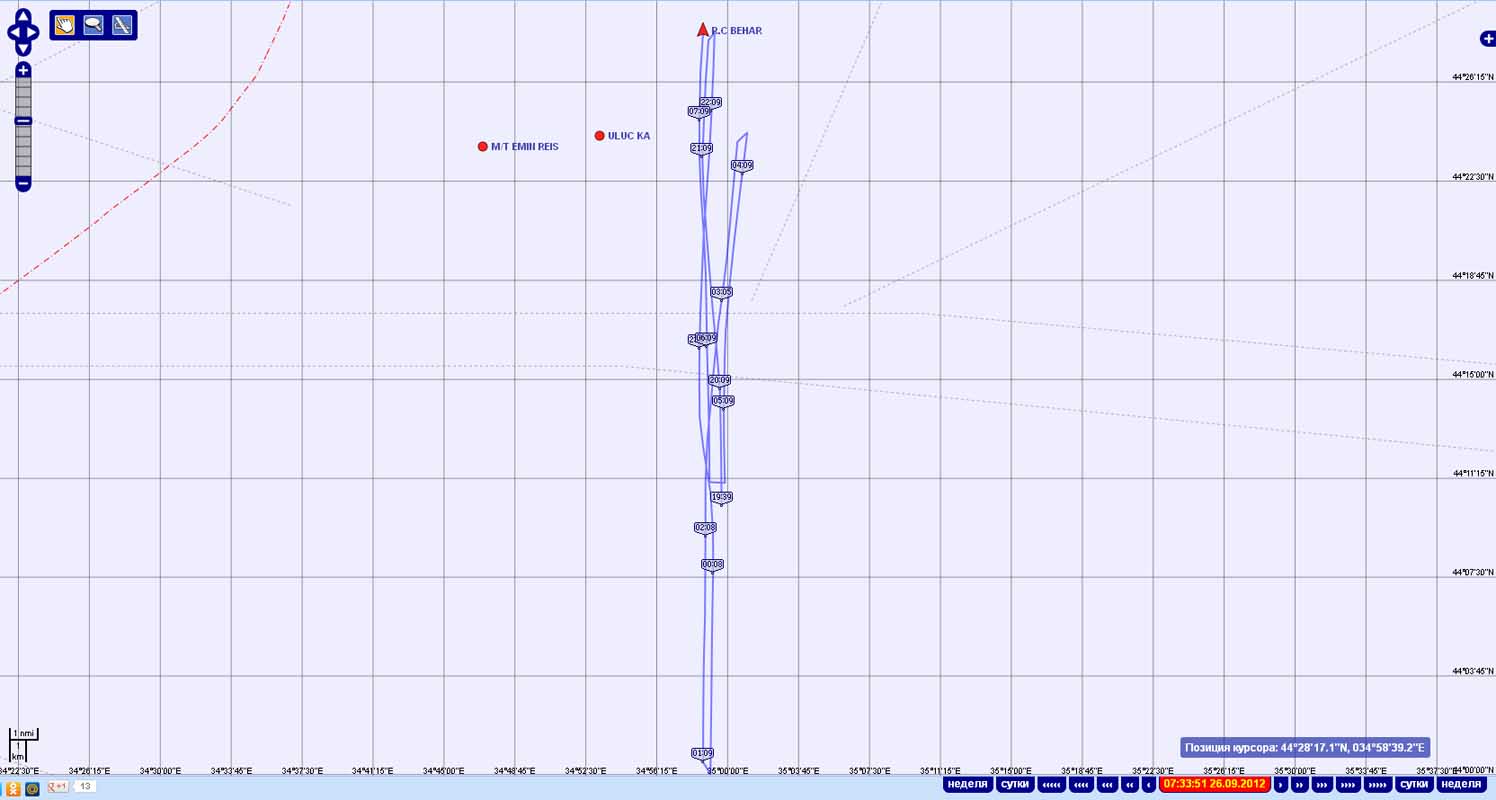 The RC BEHAR tanker came to this area of the Black Sea at about 02:30 (LT) of September 25, 2012 from the area to the south of Feodosiya (we can't tell more precisely due to the absence of AIS signal) and navigated in this quite intriguing way for more than 48 hours(!) – approximately till 03:00 (LT) of September 27, 2012 and then sailed in backward direction – to the Strait of Kerch (possibly, to get loaded?).

As for the other two tankers which fell under our suspicion, EMIN REIS and ULUC KA, then the suspicion is caused by their too long cruising at the low speed in the same area of the Black Sea.

While the deatiled analysis of the ScanEx map of September 29, 2012 allowed us to make one more assumption... 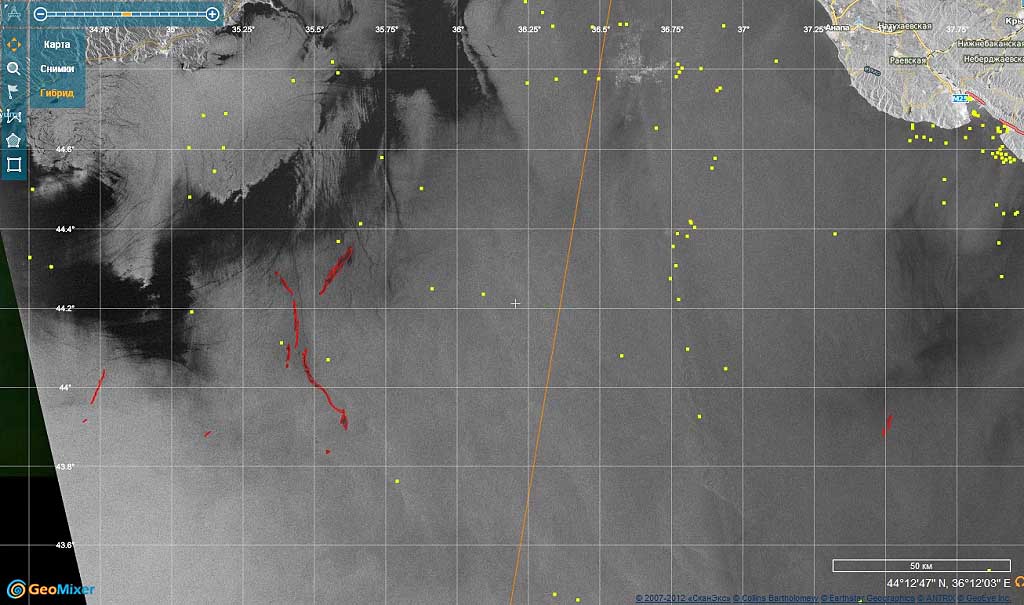 It is highly likely that the area of the Black Sea starting approximately 30-35 km to the south-east of Alushta (i.e. beyond the 12-mile zone established by the MARPOL convention on sea pollution prevention), is chosen by a number of shipowners, operators and captains of tankers for an illegal washing of tanks.

We believe that this situation can develop into great reason for cooperation of the Black Sea countries to protect this sea from pollution.

And taking into account the availability of the free access to a number of the web portals featuring data on vessels navigation in the Black Sea, this activity can be of interest to enthusiastic amateurs, as well ...

Editorial board of BSNews will be grateful to readers who will detect and report to us about this kind of suspicious cases.

In order to provide our readers with some examples of similar investigations, we would like to note that in 2011 experts of ScanEx RDC together with experts of Institute of Oceanology named after P. P. Shirshov of the Russian Academy of Sciences also carried out (1, 2, 3) the complex analysis of satellite data, which captured the same cases in the Black Sea.

And it goes without saying that if ship owners or operators of the above mentioned vessels want to dispel our assumptions – it will be our pleasure to provide such an opportunity to them.

The data from websites: blacksea.sytes.net,
marinetraffic.com, shipspotting.com were used by BSNews
in preparation of the matters.