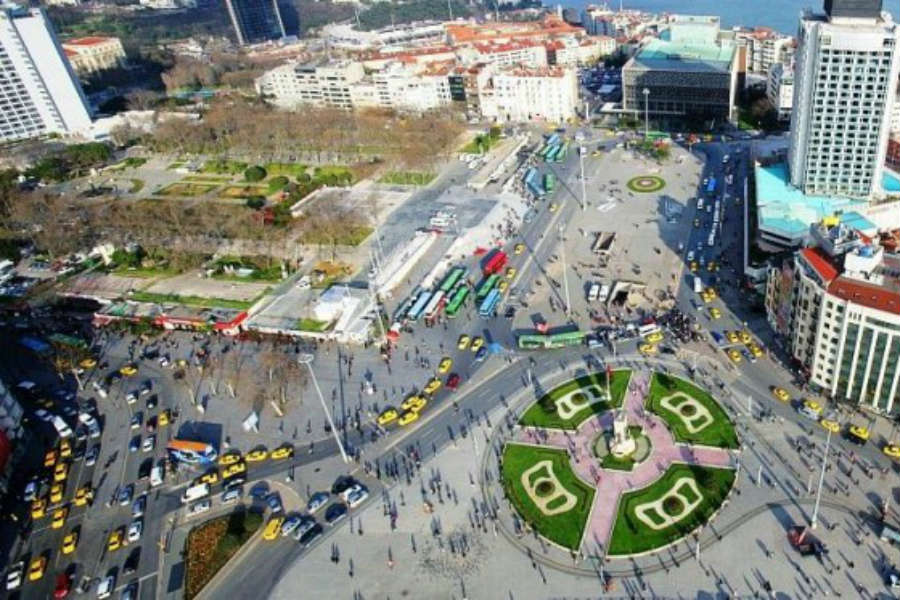 Istanbul is again saturated with construction - the next things of its agenda are: the third airport, the new HYATT hotel and reconstruction of the central Taksim Square. Besides, the city has welcomed major international car show and NASA exhibition. Moreover, Istanbul has become the world capital of coffee, which for sure will increase the number of tourists-coffee drinking fans.

The future location of the third Istanbul's airport was reported on October 30, 2012. Mayor Kadir Topbaş said, that the city’ new air gateway will be constructed in the area of Terkos Lake (Duru) in the northern part of Istanbul.

The Mayor of the city added that expected capacity of the airport will be up to 150 million passengers (initial capacity at first stage - 90 million).

Sources in the Ministry of Transport, Shipping and Communications of Turkey reported earlier, that the cost of the project construction will be 10 billion Turkish Liras. The area of the new airport will be 750,000 sq. m.

In turn, the very construction of the third airport resulted in growing prices of the Istanbul real estate.

After the official announcement of the site of the third Istanbul airport, prices of both land and houses in the north-west area of the city started to grow rapidly, the real estate agencies claimed.

Profiteers are also increasing prices of land next to the Bosporus strait in the northern Istanbul in and around the area of the construction of the third bridge across the strait. Both land and homes prices have tripled just within the period of the last six months.

According to the data of Reidin.com, average price per square meter of real estate in the northern part of the Eyüp district amounted to 1567 TL, which is 16% higher than a year before when one square meter of housing in this area cost 1351 lira.

In the Arnavutköy area average price per square meter of real estate has increased up to 1,015 Turkish Liras or 21.27%, while prices in neighboring villages exceeded 400 TL.

A real estate agent Cengiz Akyüz comments: “No one lives in the villages of this area. But the plots of land around the village houses - they are of value now. The cost of the village houses in the area has increased from two to three times, subject to the size of the nearby land plot.” 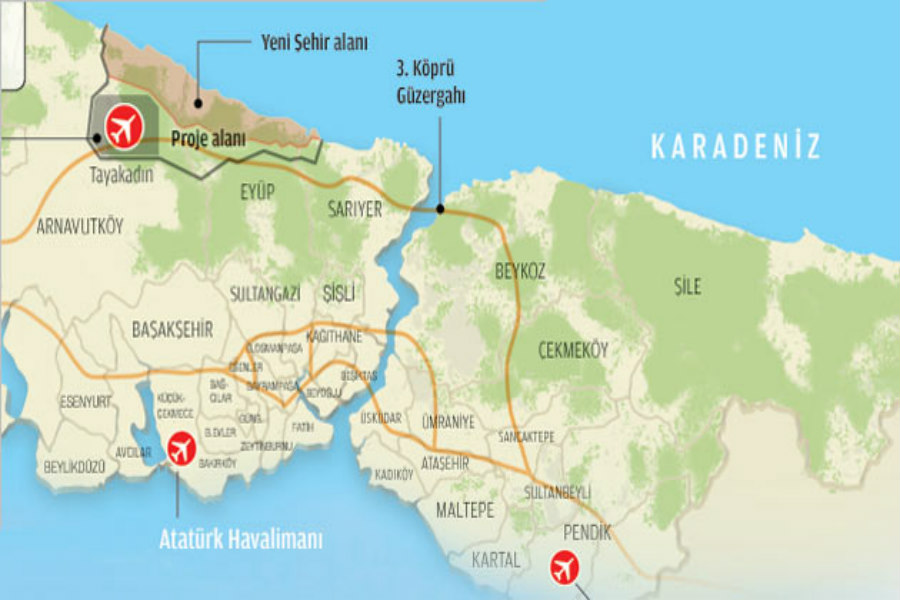 The central part of Istanbul was also involved in reconstruction - from November 5, 2012 Taksim Square in Istanbul became partially pedestrian.

Plan to transform Taksim Square in Istanbul into the pedestrian zone was partially executed on November 5, 2012. Since then vehicles are banned to enter 400 meter stretch of Tarlabaşı Boulevard between the parking lot in Cumhuriyet Street and Divan Hotel.

It has not yet been finally decided whether the area will be closed for traffic completely. In order to establish both pedestrian and vehicle movement, the plan envisages to take all of the major traffic routes underground.

By the way, digging at Taksim Square in Istanbul is to be carried out under the supervision of the staff members of the Archaeology Museum.

Minister of Culture and Tourism Ertuğrul Günay said that archaeologists had no intention to impede the excavations but discovery of archaeological values in this historic area could be highly possible.

During the period from 2000 to 2011, excavations in the area have allowed to reveal the Genoese gravestones. The 5th century sarcophagi were discovered as the result of construction of the Ataturk Cultural Center in Taksim Square. 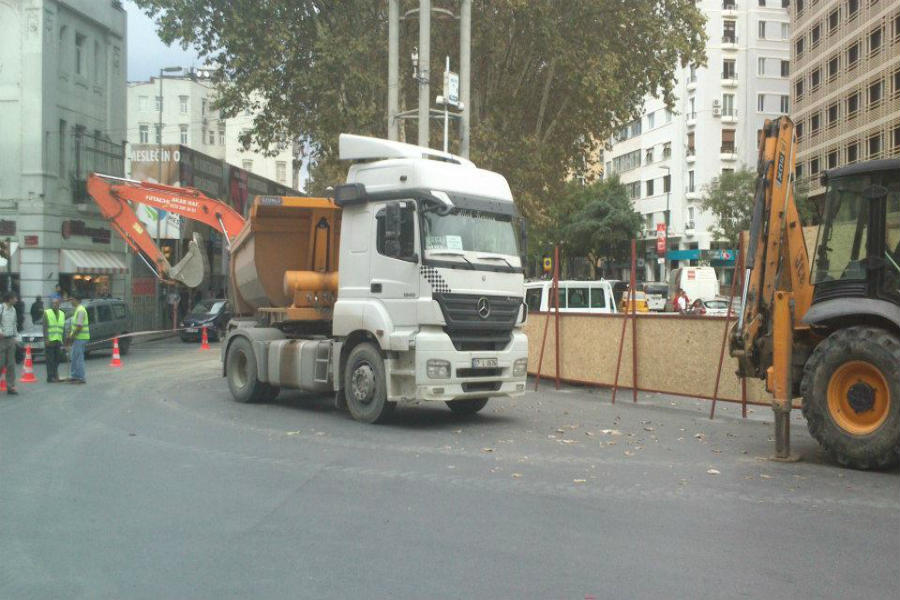 The major sporting event has attracted a lot of visitors to Istanbul.The 34th edition of the Vodafone İstanbul Eurasia Marathon took place there on November 11.

This marathon is unique as athletes cross the border between Europe and Asia during their performance of the race. The winner of this year 34th Eurasia Marathon in Istanbul was the Kenyan athlete Stephen Chebogut.

Marathon was organized by the Municipality of Istanbul. Approximately 13,000 athletes from 88 countries of the world took part in this competition. Marathon course started on the Asian side of the city, then crossed the Bosphorus Bridge and finished in Sultanahmet Square. 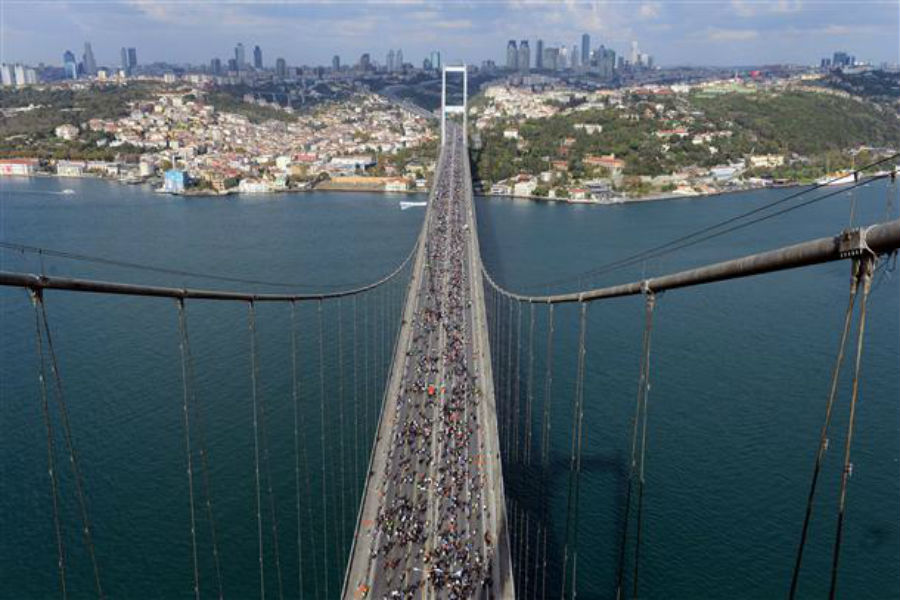 Marathon through the Bosphoros Bridge. Photo from web site: hurriyetdailynews.com

Istanbul has also hosted two major exhibitions. Istanbul Auto Show 2012, the largest event of the Turkish automotive sector, was held from 2 to 11 November in the International TUYAP Fair Convention and Congress Center.

It is expected that this year auto show with the display of 500 models of cars from 45 manufacturers will be visited by 600 000 people.Turkey premiere of 31 models and the world premiere of 4 models took place there.

Opened on November 1, auto show highlighted tremendous cost of gasoline in Turkey as well as the tax regime, which has affected the potential buyers of cars with an engine capacity over 1.6 liters.

Melik Kökçü, sales chief of Turkish Volkswagen company remarked: “We think that increase of price of gasoline will result in growing demand for diesel-engined cars.” According to him, in recent years demand for conventional cars has declined, while sales of diesel-engined ones have increased, especially of those, which engine capacity does not exceed 1.6 liter. 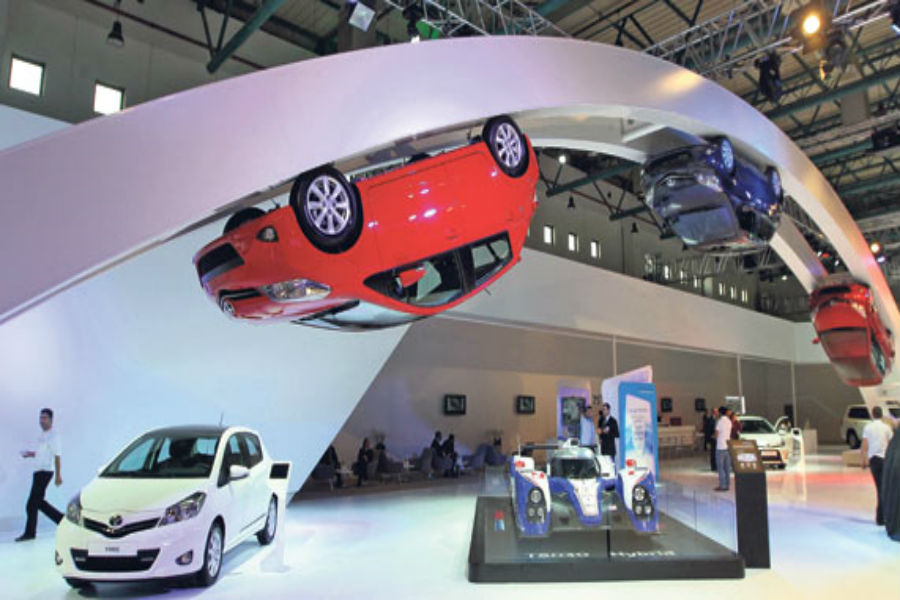 Marmara Forum Expo Center in Istanbul hosts NASA ''A Human Adventure'' Exhibition focused on human space explorations starting from the XIX century up to the present time and featuring the distant future prospects.

The U.S. National Office for Aeronautics and Space Administration brought to Turkey unique pieces from its collection: full-size capsules of shuttles, Moon and Mars rovers, tube-packed food and drinks for astronauts, space suits and clothing designed especially for space crews, numerous magazine covers and photos illustrating the undying interest of man in space.

Much of the exhibition is devoted to the U.S. explorations in the field of cosmonautics, both successful and tragic ones: in one of the rooms they display a copy of foam insulation which caused the disaster of «Columbia» shuttle, which resulted in the death of all its seven crew members in 2003. Some of the exhibits highlight the contribution of Soviet scientists and astronauts to space exploration.

By the exit visitors can run into the unique surprise: the G-2 simulator, which allows to experience gravity-free state at the moment of lift off as well as return to the gravity of Earth on landing. 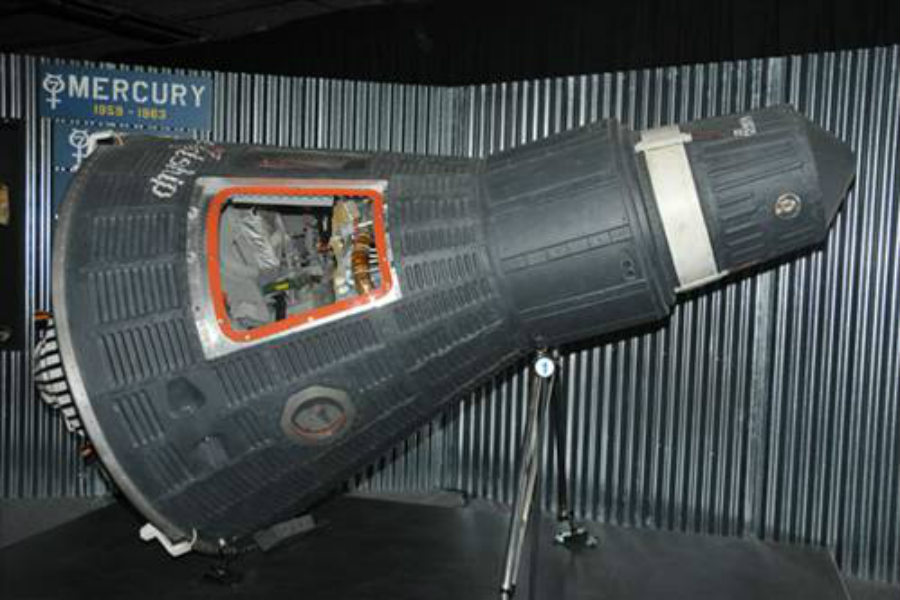 One of the exhibits. Photo from web site:sabah.com.tr

Istanbul was recognized coffee capital of the world and this fact became a great virtue for tourist sector of the city.

U.S.researchers have compiled a unique rating of cities, which are best suited to the numerous men and women - real fans of coffee, which well-known Thomas Jefferson used to call "the favorite drink of the civilized world."

Istanbul of Turkey was granted the title of world capital of coffee by American experts, as in this city they really know how to brew black Turkish coffee with extraordinarily rich flavor and absolutely unforgettable aroma. 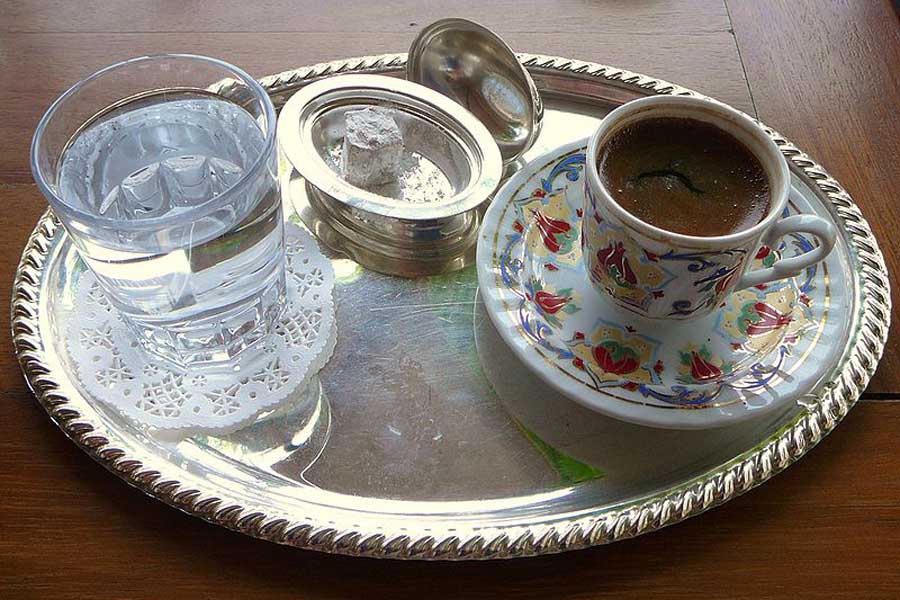 The increased tourists flow to the city calls for construction of new hotels. A quiverful of Istanbul hotels will be supplemented with the third hotel of the HYATT brand.

It became known that this new hotel will have capacity of 310 guestrooms, including 30 suites; size of rooms will be ranging from 38 sq m to 180 sq m. The hotel guests will be able to use ballroom, two restaurants, bar, outdoor and indoor pools, fitness and spa centers. The hotel’s interior design will be made by reputed GA Design International.

At this stage Hyatt Regency has got 146 hotels in China, India, South America, the Middle East and the U.S.. In Istanbul, there are so far two hotels of the Hyatt chain - Grand Hyatt Istanbul and the Park Hyatt İstanbul Maçka Palas. 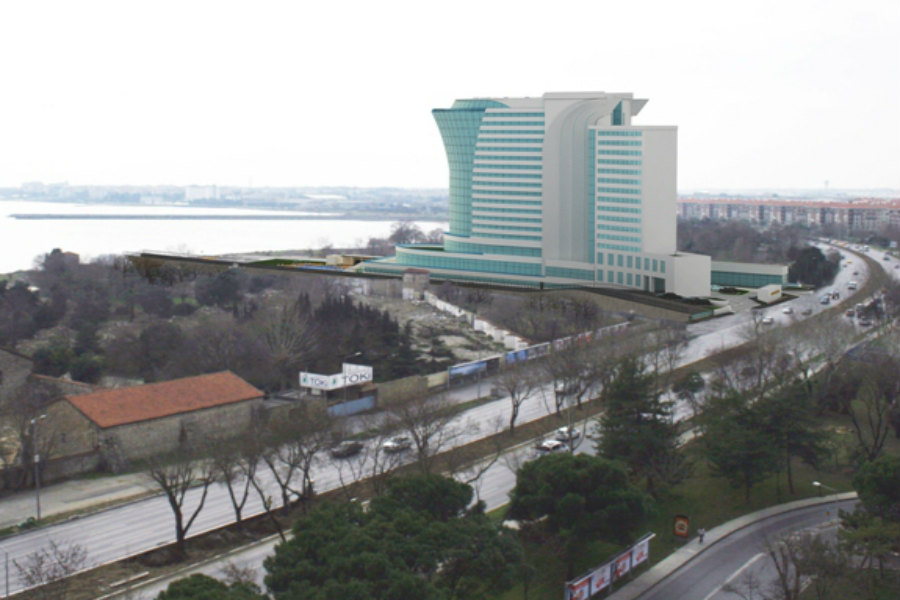 More news on Istanbul construction projects, culture events and international conferences are coming in the next BlackSeaNews review.