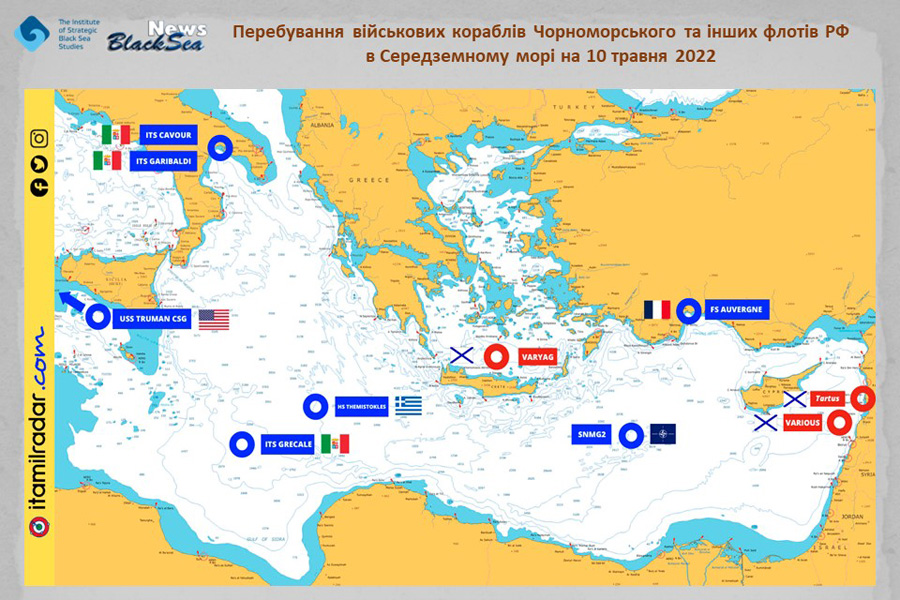 The Monitoring Group
of the Black Sea Institute of Strategic Studies

As of 10 May 2022, the same naval group is present in the Mediterranean Sea as was on 7 February 2022 - i.e. no changes have taken place over the last 3 months. There are 13 ships and 5 support vessels of the four Russian fleets, including 9 attack missile ships (see below).

This situation is a consequence of Turkey’s decision, which was announced on 27 February 2022, to ban the passage through the straits of any warships, including ships of non-Black Sea NATO countries (it is worth reminding that Turkey is a NATO member).

If a warship intends to proceed to a base located in a country that is a party to the war, then its passage cannot be prohibited. Here it is clear whether this ship is assigned (registered) to this (naval) base or not. And it is necessary to avoid abuse. It is necessary that the ship should not take part in the war after passing through the Bosphorus under the pretext of following to its base. In this way, I have explained the provisions of the Montreux Convention and the position of Turkey.

As there are different emphases and contradictions both in the statements of the Turkish leaders and in the text of the Montreux Convention to which they refer, it can be assumed that Turkey uses Articles 20 and 21 of this document in the sense that “should Turkey consider herself to be threatened with imminent danger of war, the passage of warships shall be left entirely to the discretion of the Turkish Government.”

In addition, Turkish officials publicly refer to Article 19 of the Convention in the sense that “vessels of war belonging to belligerent Powers shall not, however, pass through the Straits,” but at the same time, they mention that in the same article there is a provision that “notwithstanding the prohibition of passage laid down ... above, vessels of war belonging to belligerent Powers, whether they are Black Sea Powers or not, which have become separated from their bases, may return thereto.”

In general, this gives Turkey the opportunity to use a very flexible negotiating position in relations with Ukraine, Russia, and NATO.

Note that as of now, Turkey's policy has the following main implications for Russian warships:

1. Turkey has refused to allow Russia to send 4 (four) missile ships from different fleets to the Black Sea. This has made it impossible to create in the Black Sea a large enough group of attack surface ships for fire support of landing operations on the Black Sea coast.

It is quite correct to assume that this (at least for now) also concerned the frigate, corvette, and two submarines of the Russian Black Sea Fleet, which are armed with Kalibr cruise missiles and are in the Mediterranean, whose returning to their bases could theoretically be used by Russia as an argument.

Moreover, on 23 April 2022, Turkey announced the closure of airspace for Russian military and civilian aircraft bound for Syria.

According to the Turkish Foreign Minister, the permits had been issued for three months, the last one expired in April, and Turkey has not renewed it. The reasons for this move were not stated, but it can be assumed that it could be related to reports that Russia has involved a group of Syrian troops in hostilities in Ukraine. In addition, it is quite possible that the Russian Federation intends to use in the war against Ukraine units of the Russian Black Sea Fleet Marines stationed at the Tartus naval base.

In addition, it can be predicted that Russia will not abandon its attempts to change Turkey's position on banning the use of the straits by Russian ships on the pretext of returning to their home bases.

1. The Composition of the Russian Naval Group in the Mediterranean Sea

As of 00:00 (Kyiv time) on 10 May 2022, there are 13 ships and 5 support vessels of the four Russian fleets in the Mediterranean Sea, including 9 attack missile ships:

On 28 February 2022, Turkey announced that it had closed the Bosphorus and Dardanelles in accordance with the 1936 Montreux Convention, which prohibits the passage of warships of warring countries.

"Russia has announced that four of its ships will cross the straits on 27-28 February, three of which are not registered at bases in the Black Sea. We told Russia not to send these ships, and Russia said that the ships would not cross the straits," Cavusoglu said. Earlier, Reuters reported that at least four Russian ships - two destroyers, a frigate, and a reconnaissance ship - were waiting for Turkey's decision to move from the Mediterranean to the Black Sea.

According to the Monitoring Group, these ships were:

It should be noted that this decision was made by Turkey due to strong diplomatic pressure from Ukraine. According to our data, on the first day of the Russian attack - 24 February 2022 - the Ukrainian Embassy in Ankara sent several harsh notes demanding an immediate ban on the passage of Russian warships through the Turkish straits.

For detailed information on the presence of warships of the Black Sea and other Russian fleets in the Mediterranean, see Table 1.

Table 1. The Presence of Warships of the Black Sea and Other Fleets of the Russian Federation in the Mediterranean Sea as of 10 May 2022 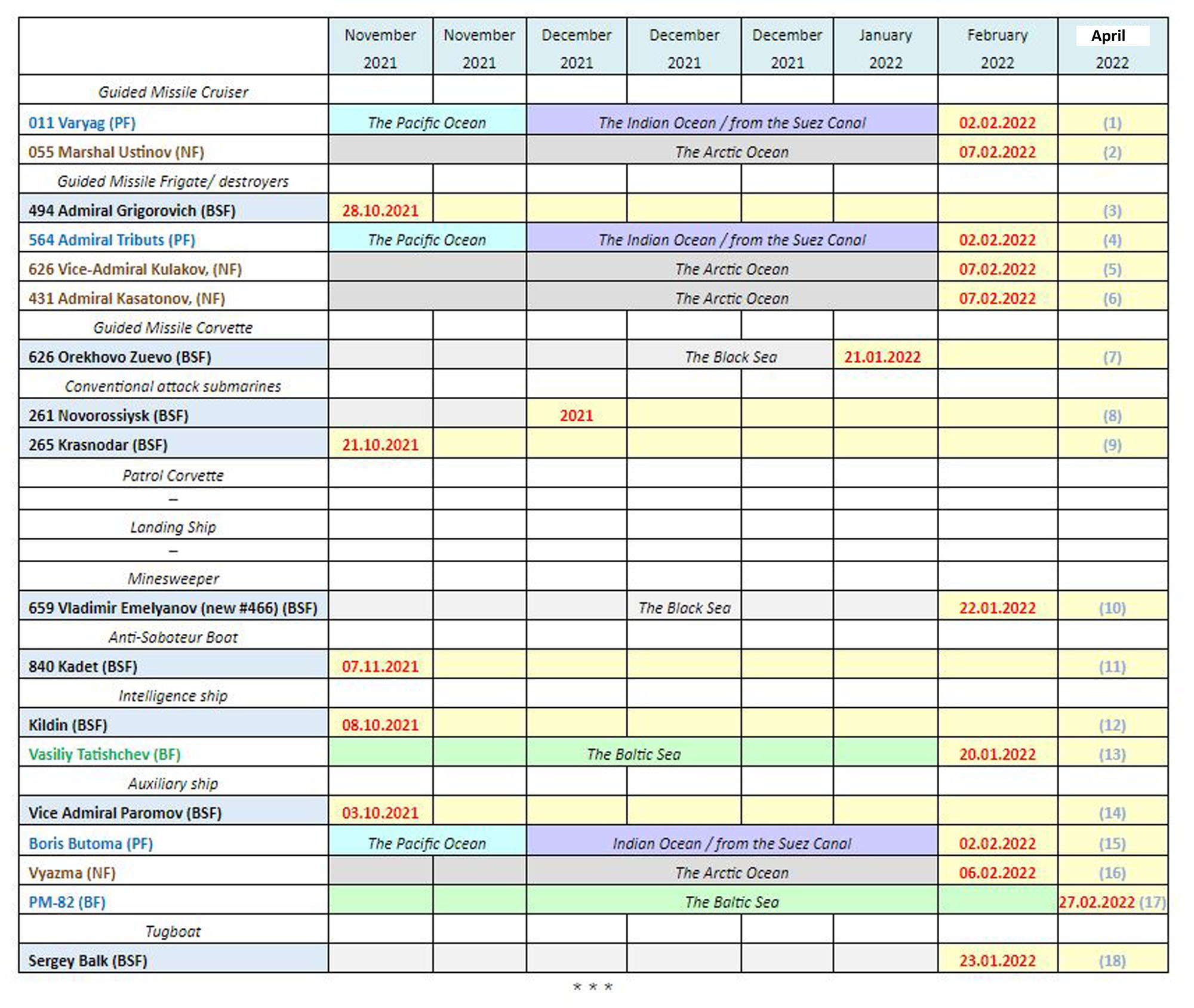 2. Strengthening the Russian Naval Group in the Black Sea
due to the Redeployment of Ships From the Mediterranean in Early 2022

Since the beginning of 2022, the Russian Federation has redeployed 20 warships from the Mediterranean to the Black Sea, including 14 ships of the Black Sea Fleet, as well as 6 ships from the Northern and Baltic Fleets (3 from each).

The formation of a huge "Mediterranean Squadron" of the Russian Navy in February 2022, using the Northern, Baltic, and Pacific Fleets’ ships allowed the Russian Black Sea Fleet to return a large number of ships to the Black Sea a few days (weeks) before Russia’s attack on Ukraine.

On 26 January 2022, 3 major amphibious assault ships of the Baltic Fleet entered the Mediterranean Sea via the Strait of Gibraltar. They entered the Black Sea on 8 February 2022:

On 27 January 2022, 3 major amphibious assault ships of the Northern Fleet entered via the Strait of Gibraltar:

Due to this, Russia has got the opportunity to demonstrate amphibious operations in the Black Sea and carry them out in the Sea of Azov.

However, the fact that Russia has failed to redeploy additional powerful missile surface combatants to the Black Sea has called into question the effectiveness of a possible amphibious operation on the Ukrainian Black Sea coast.

Table 2. The Redeployment of Ships of the Black Sea and Other Fleets of the Russian Federation From the Mediterranean to the Black Sea as of 10 May 2022 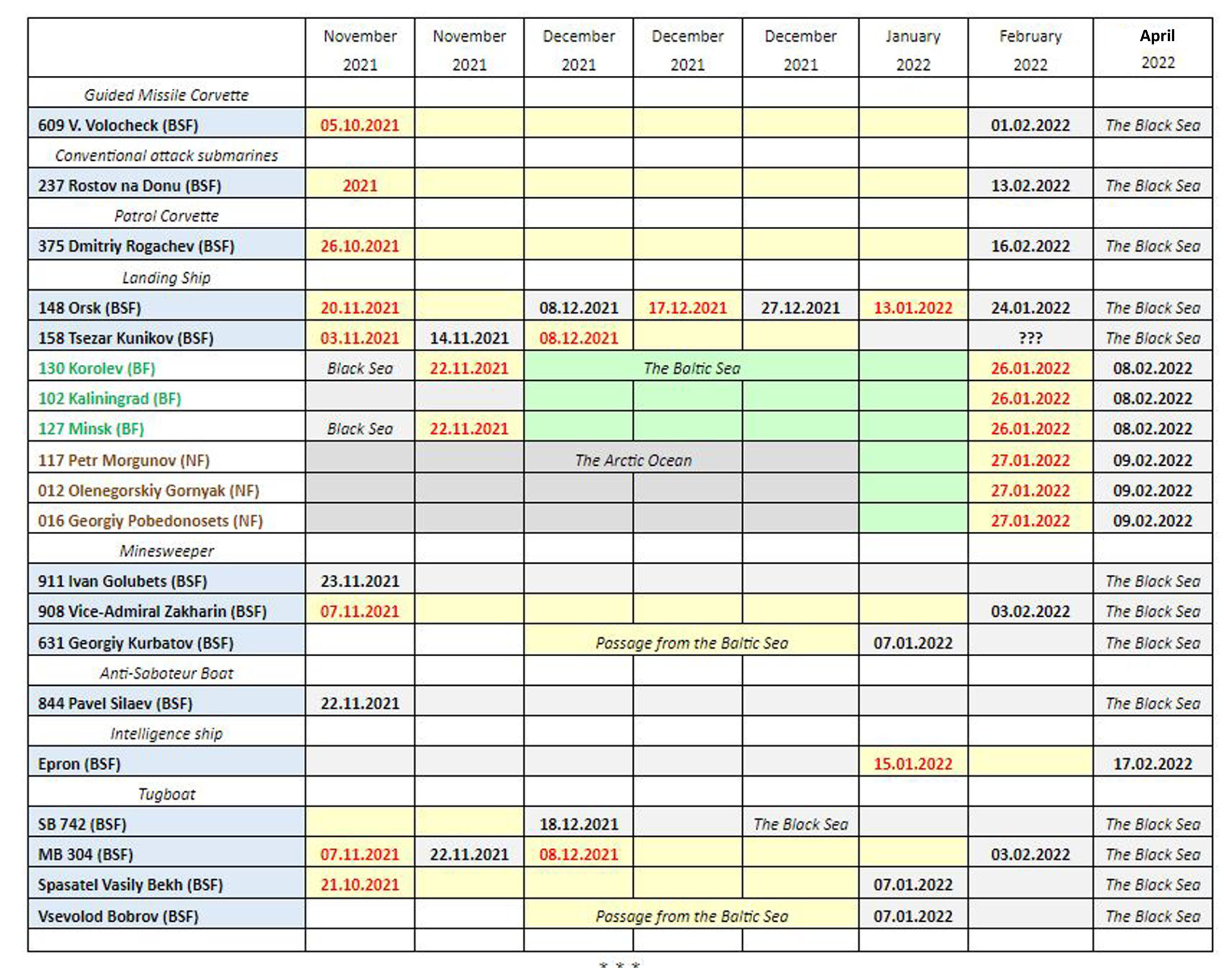