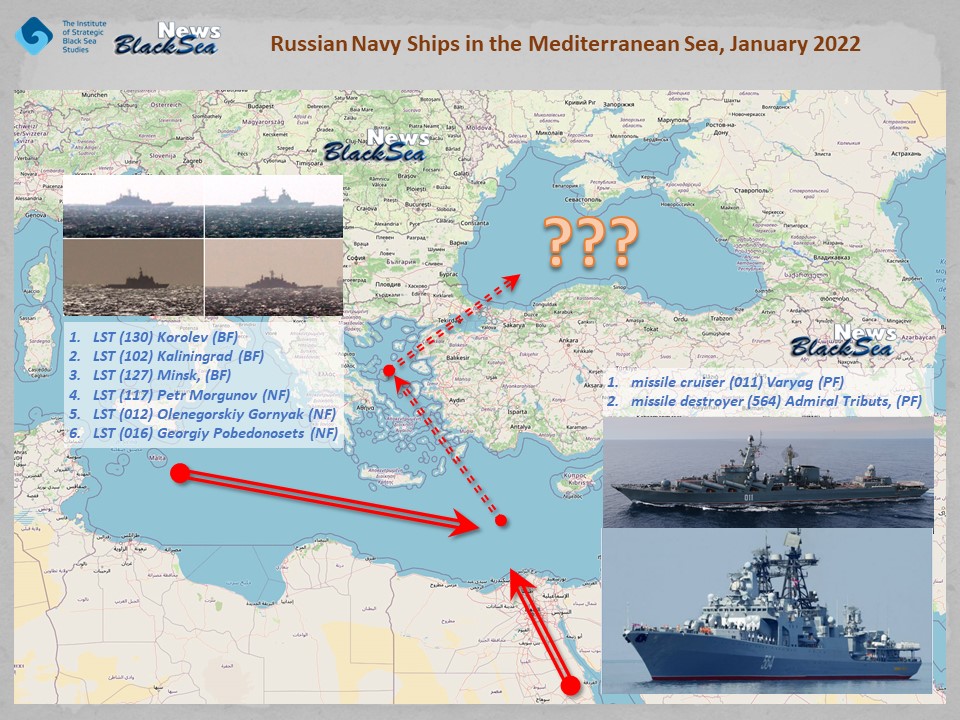 In January 2022, the number of Russian warships in the Mediterranean Sea changed dramatically. 6 major landing ships from the Baltic and Northern Fleets joined the "Mediterranean Squadron" of the Russian Federation. A missile cruiser and a missile frigate from the Pacific Fleet are expected to arrive via the Suez Canal.

Thus, in February 2022, the Russian naval group in the Mediterranean Sea will have 18 major warships, including 8 missile ships (in December 2021, these figures were 8 and 5 respectively).

1. As previously reported, as of 15 December 2021, the standard composition of the naval group of the Black Sea Fleet of the Russian Federation was present in the Mediterranean Sea.

2. As of 30 January 2022, the naval group of the Black Sea Fleet of the Russian Federation has increased: a missile corvette, a minesweeper, and an intelligence ship have joined the group. The current composition of the naval group is as follows (the changes are marked in colour).

3. However, the radical changes in January 2022 were not related to the Black Sea Fleet (BSF) but rather to three other fleets of the Russian Federation – the Baltic (BF), Northern (NF), and Pacific (PF) Fleets.

4. Thus, in the first week of February 2022, the naval group of the Russian Navy in the Mediterranean Sea will have the following composition:

The official reason for such an unprecedented increase in the number of Russian Navy ships in the Mediterranean Sea is conducting exercises.

In parallel with them, NATO exercises are taking place in the Mediterranean with the participation of the USS Harry S. Truman.

If all the landing ships that are currently in the Mediterranean enter the Black Sea*), a serious naval group of Russian landing ships may be formed off the coast of Ukraine to conduct an amphibious operation (or several operations) in the Black Sea and the Sea of Azov.

*) see the update at the end of the text.

According to the estimates of our military colleagues from the ArmyInform News Agency, which we have slightly adjusted, taking into account the characteristics of these ships, it is possible to determine the scale of such a hypothetical operation. In total, the group may include eight major landing ships of Project 775 (Ropucha), three ships of Project 1171 (Alligator), and one of Project 11711 (the Ivan Gren class).

"It is estimated that such a group of landing ships can take on board and transport about 150 main battle tanks or up to 250 armoured combat vehicles and about 4.2 thousand members of the amphibious force. In fact, a brigade of marines, reinforced by two tank battalions and mechanized and artillery units.

BSN’s reference. Prior to the reform of the Russian Marines, which began with the 61st Marine Brigade of the Northern Fleet, a brigade consisted of two battalions – amphibious assault and marines, as well as an intelligence company and a number of small units. According to the new establishment, a marine brigade consists of 6 battalions: 2 battalions of marines, an intelligence battalion, and a tank battalion have been added. In addition, a brigade has been reinforced by two companies – sniper and unmanned aerial vehicles (UAVs).

The water draught of such ships is 3.7-4.5 metres, i.e. they need to have the appropriate depth near the shore where the landing will take place. Suitable conditions in this theatre of operations can be found on the Black Sea coast – from the Isthmus of Perekop, starting from the coast of the Kherson region, and further to the west."

It should be added that similar amphibious operations can be planned in the Sea of Azov as well – for example, landing directly in the water area of the seaports of Mariupol or Berdiansk. When landing on the coast of the Sea of Azov, additional vessels may be required to deliver marines from a major landing ship to shore.

It is possible that the 6 major landing ships from the Baltic and Northern Fleets have aboard only equipment and military cargo, some of which can be unloaded, for example, at the Russian naval base in Tartus, Syria. Because the presence of marines aboard the landing ships during the two-week sea passage in the winter stormy sea is unlikely to be good for their morale.

That is, in the case of further presence in the Black Sea, the marines could be taken on board in Novorossiysk or Sevastopol, where they can be redeployed by air or rail from Murmansk or St. Petersburg.

It is worth reminding that as of 31 January 2022, warships of non-Black Sea NATO countries have not been present in the Black Sea for 29 days, which we analysed in detail in a recent review.

Thus, as far as the activity of Russian warships in the Mediterranean Sea and the Black Sea is concerned, at the end of January 2022 (unlike the previous month), the degree of risk increased significantly.

Updated! On 1 February 2022, the BlackSeaNews Monitoring Group received the information, which was confirmed by independent competent sources, that:

It is worth reminding that on these dates – starting from 10 February – the joint exercise of the Armed Forces of the Russian Federation and the Republic of Belarus Soyuznaya Reshimost 2022 ( Allied Resolve 2022) is scheduled to be held in Belarus. The exercise script is "to work out various options for joint action to neutralize threats and stabilize the situation on the borders of the Union State of Russia and Belarus."

For detailed information on the presence of warships of the Black Sea Fleet and other fleets of the Russian Federation in the Mediterranean Sea, see Table 1.

Table 1. The Presence of Warships of the Black Sea Fleet and Other Fleets of the Russian Federation in the Mediterranean Sea in November 2021 – January 2022

This article has been prepared with the support of the European Union in Ukraine. The content of the article is the sole responsibility of the authors and does not necessarily reflect the position of the EU.