Blocking the Ukrainian Azov Sea Ports: a Significant Increase Under the Storm Guise 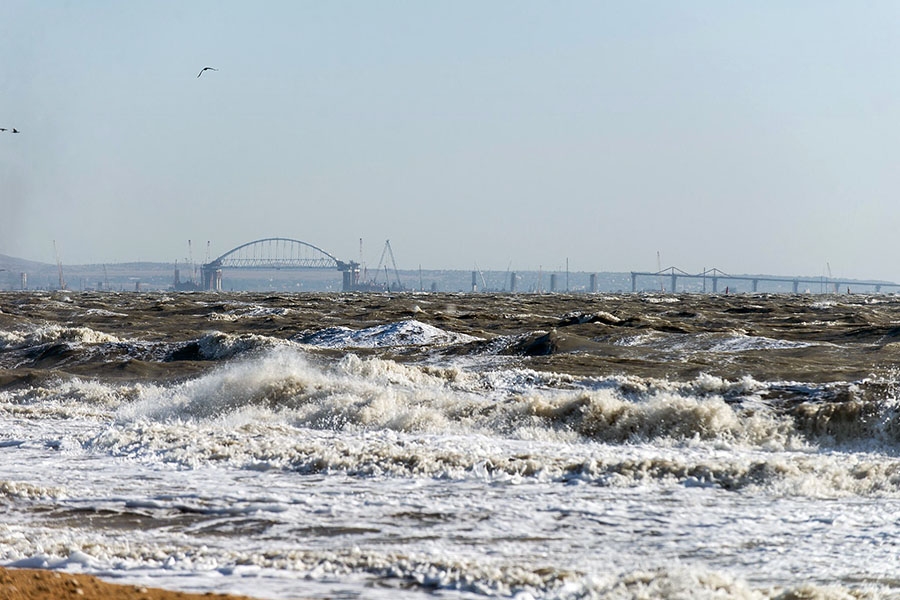 by Andrii KLYMENKO
Head of the Maidan of Foreign Affairs and Black Sea Institute of Strategic Studies monitoring group, the BlackSeaNews editor-in-chief, Yalta-Kyiv

Below is the monitoring team’s update on the summer-early fall 2019 developments of the already infamous process of obstructing the freedom of navigation in the Kerch Strait for seagoing ships to/from Mariupol and Berdyansk, the Ukrainian ports on the Sea of Azov.

Without further ado, below is the statistics.

The Dynamics of an Average per Vessel Delay at the Entrance to the Sea of Azov Since the Beginning of the Blockade in May 2018, as of October 1, 2019, hrs 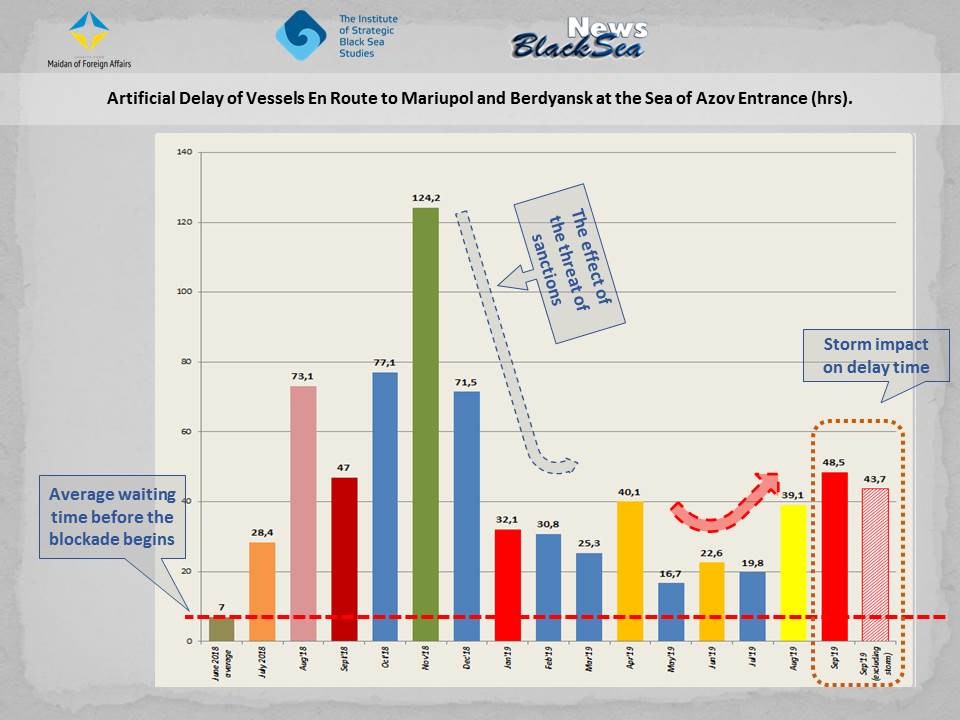 The Dynamics of an Average per Vessel Delay at the Eхit from the Sea of Azov Since the Beginning of the Blockade in May 2018, as of October 1, 2019, hrs 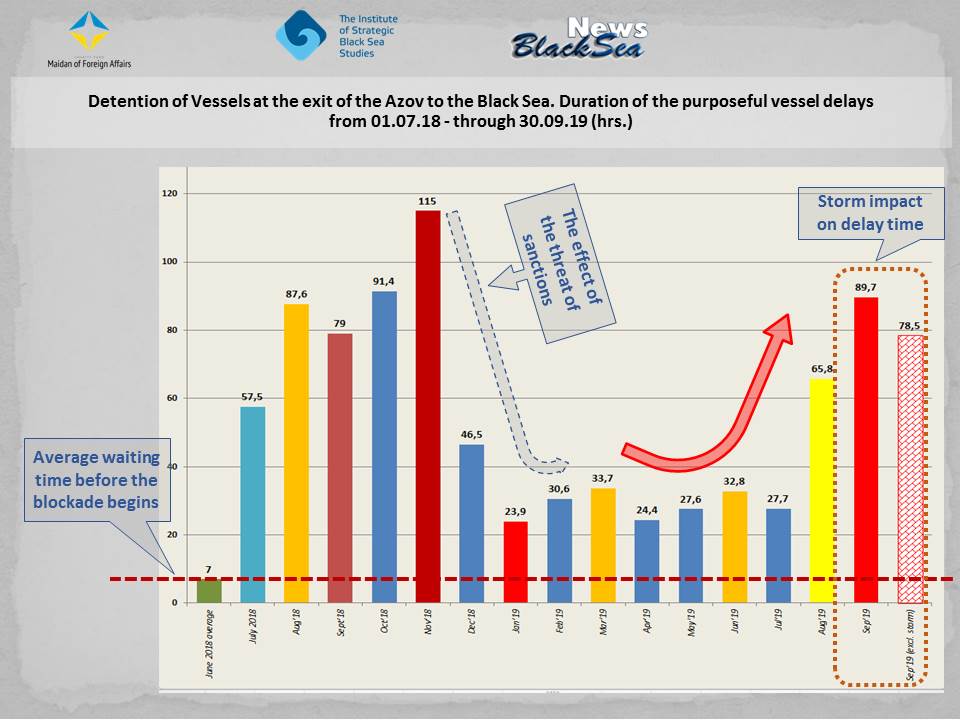 The above charts illustrate:

1. The significant decrease in the delay time that took place in December 2018 - January 2019, was obviously due to the real threat of the Azov sanctions package against the Russian Federation’s Azov and Black Seas ports.

At the time, the threat came through in numerous US and EU documents, speeches and phone conversations between foreign and the Russian Federation leaders.

However, the Azov sanctions had never materialized, except for merely symbolic personal sanctions on several FSB Coast Guard officials after the capture of Ukrainian ships in the Black Sea, and the decrease in the vessel delay times continued only through July 2019.

By August-September 2019, though, it seems the effect of the threat had vanished.

2. In August 2019, the time of purposeful delay of the Mariupol/Berdyansk vessels began to rise again.

In general, compared to July 2019, over the last 2 months — August-September — the waiting time at the inlet to the Sea of Azov has increased 2.4 times, while at the outlet from the Sea of Azov — 3.2 times.

For explanation of the normal times, sea the endnote.

3. Our investigation has found that stormy weather observed for 5 consecutive days in September when the Kerch Strait traffic was stopped has not significantly affected the numbers.

It had been clear to us that the weather circumstance would be used by the Russian side to justify the increase in waiting times for the Mariupol- and Berdyansk-bound vessels. So, we used the methodology that allowed us to separated the storm factor from the rest by including a study of different sources of storm warnings, the actual weather and the arrival and departure times for each of the hundreds of vessels passing the Kerch Strait in September 2019.

That is, the stormy weather in September increased the delay time by an average of only about 10-12%.

4. So, if it wasn’t the storm, what then had accounted for the sharp increase in both September and August 2019?

4.1. Note that the delay time of "outgoing" vessels — i.e., those with cargo headed from the Ukrainian ports mainly to the EU, Turkey and North Africa was almost twice as long as the delay of the ships entering the Sea of Azov en route to Mariupol and Berdyansk in ballast.

4.2. Another important element of the "artificial delay technology" is giving priority to ships headed to/from the Russian ports on the Sea of ​​Azov over those headed to Mariupol and Berdyansk.

That is especially evident right before or immediately after the Kerch Strait storm-related closures (see example # 1 on the next slide): 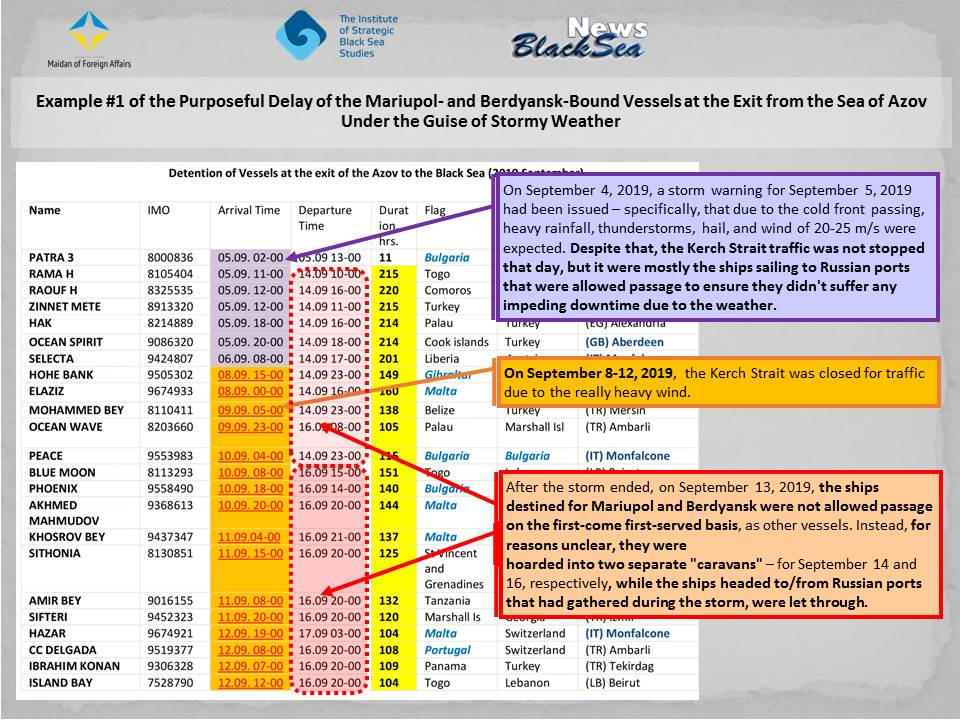 4.3. Finally, over the summer-early fall of 2019, unlike the Russian or other vessels departing to/from the Azov ports of the Russian Federation, the Mariupol/Berdyansk vessels were forced to cross the Kerch Strait not in the customary order, but in separate caravans formed only once every few days.

As identified by the Monitoring Group, that was the case even on the days when there were no weather issues in the Kerch Strait (see example # 2 on the next slide): 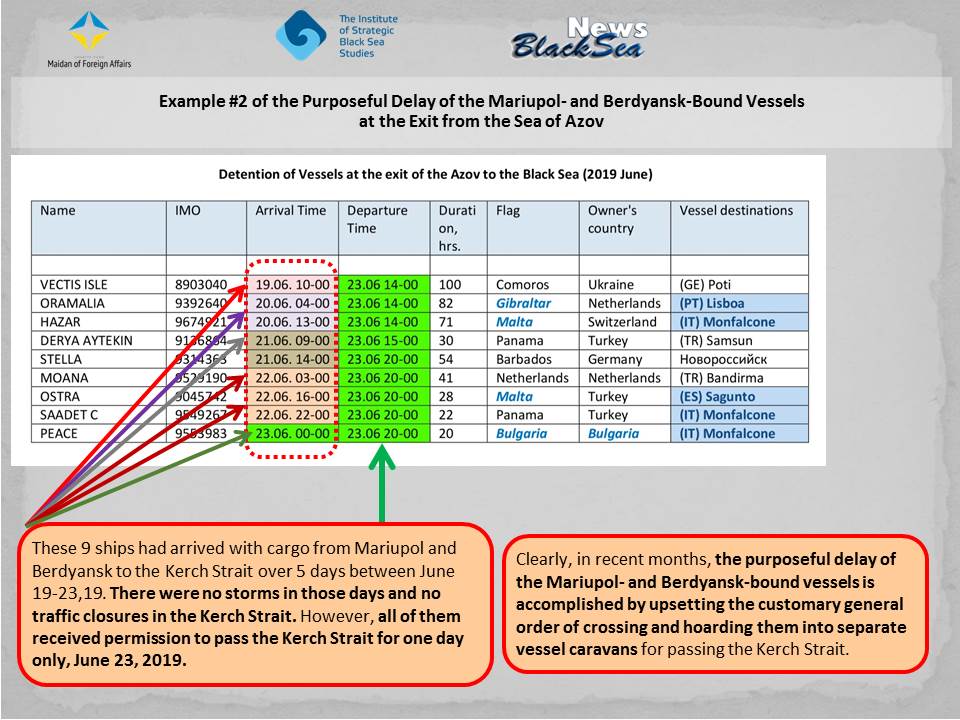 So, by now, the situation with the artificial delays of the Mariupol/Berdyansk vessels at the entrance to the Kerch Strait has returned to that of September-October 2018.

It seems time has come to once again raise the issue of the Azov sanctions package against Russia’s Azov ports actively involved in the regular cargo transportation to and from the occupied Crimea, namely, Rostov-on-Don, Azov and Temryuk.

An important clarification on what is considered the normal waiting time, that is, when there is no purposeful blockade:

In the absence of a storm, the normal waiting time for obtaining the permission from the Kerch Seaport manager — located on the occupied Crimean peninsula — to cross the Kerch Strait is up to 2-5 hrs, as it always had been before the start of the blockade in May-June 2018.