The joint monitoring group of the Black Sea Institute of Strategic Studies, the Maidan of Foreign Affairs and BSNews reports that aircraft VP-BJG of Russia's Moscow-based Nordwind Airlines may be involved in preparations for the coup in Venezuela.

In September 2018, the VP-BJG aircraft of the Nordwind Airlines provided passenger transportation to the occupied Crimea's Simferopol airport and was subsequently put on the blacklist of vessels that carry out illegal flights to the Russia-occupied peninsula.

The monitoring group regularly compiles databases of aircrafts engaged in illegal regular passenger air transportation to the occupied Crimea and forwards them to official EU and US institutions. In particular, letters with detailed databases have been sent on multiple occasions to the embassies of the EU and the US in Ukraine, the European Union's High Representative, Federica Mogerini, and the US Department of the Treasury.

We continue to emphasize the importance of introducing international sanctions in the field of civil aviation concerning Russian airlines and aircraft involved in illegal air transportation to and from the occupied Crimea.

Note: The Boeing 777-2Q8 (ER) aircraft with tail number VP-BJG of the Russian Nordwind Airlines has also flown to the Turkish and Italian airports.

On December 3rd, 2018, that same aircraft has already flown from Moscow to Caracas and back. 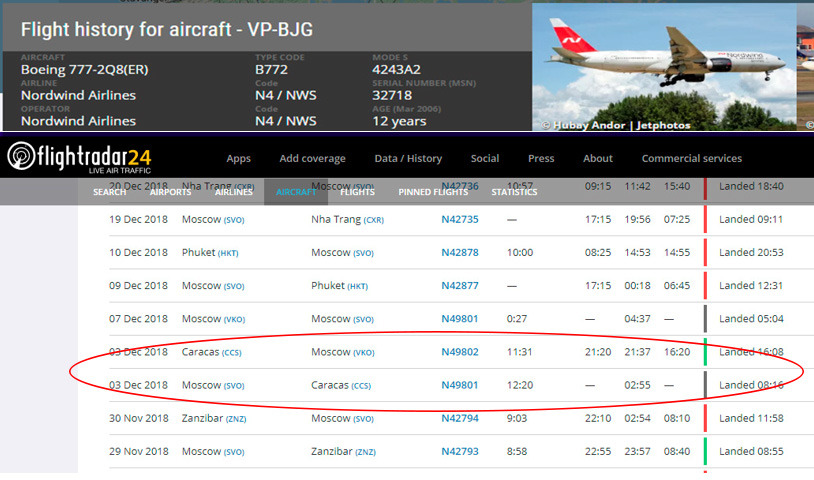 The airline and aircraft listed above have thereby violated Article 332-1 of the Criminal Code of Ukraine:

BSNews and Maidan of Foreign Affairs (Kyiv) calls on the law enforcement authorities to respond to the violations of the legal procedures for the occupied territory:

BSNews and Maidan of Foreign Affairs have included the airlines and respective aircrafts into the “black list” of those who violated the legal procedures for the temporarily occupied territory of Ukraine.