Closure of the Azov-Black Sea Region in November-December 2021

The Monitoring Group of the Institute of Black Sea Strategic Studies and BlackSeaNews reports about closure of the various areas of the Black Sea and Azov Sea from November 1 to December 15, 2021 (as shown on the maps).

On October 27, 2021, by transmitting international Coastal Warning alerts in the NAVTEX (NAVigational TEleX) messaging system, the Russian Federation announced the closure until November 15, 2021, i.e. for 20 days of a large number of Black Sea regions (Map 1, where areas covered by the RF announcement are shaded in green).

1 – the area of the Ukrainian offshore natural gas fields on the sea shelf seized at the beginning of the Crimea occupation. The area is in close proximity to the main sea route from the Bosphorus to all Ukrainian Black Sea ports of Ukraine — specifically, Chornomorsk, Odesa, Mykolaiv and Kherson — with the route from Odesa to Georgia also passing through the area. Thus, the closure creates a constant threat to all Ukraine’s maritime traffic;

2 – the area that blocks access to the coast of the occupied Crimean peninsula;

3 – the area that blocks access to the Black Sea coast of the RF Krasnodar Krai from the Kerch Strait to the city of Sochi.

The closures were due to the 6th US Navy ships conducting joint Black Sea training with the Navies of Ukraine, Georgia, Turkey, Romania and Bulgaria, namely:

On November 16, 2021, i.e., after the US Navy ships’ departure from the Black Sea, those navigation restrictions were lifted, with only the traditional RF Black Sea Fleet combat training regions remaining closed, as they have been almost continuously (Map 2).

As of December 15, 2021, this area that is in close proximity to the main sea route from the Bosphorus to all Ukrainian Black Sea ports remains closed.

That again could be related to the presence of ​​the USS Arleigh Burke (DDG 51) patrolling the Black Sea from November 25 to December 15, 2021.

However, unlike the October 27 - November 15 period, this time, the RF hasn’t created a «buffer» by closing the areas along the coast of Crimea and Russia’s Krasnodar Krai.

On December 8, 2021, in addition to the previously closed regions, under the pretext of naval gunnery firing, the RF closed for one month, i.e., until January 8, 2022,

all three regions of the Sea of ​​Azov directly adjacent to the Ukrainian coast and Ukraine's Azov ports (Maps 4 and 5), specifically:

1 — the area of the Ukrainian offshore natural gas fields on the sea shelf seized at the beginning of the Crimea occupation. The area is in close proximity to the main sea route from the Bosphorus to all Ukrainian Black Sea ports of Ukraine —specifically, Chornomorsk, Odesa, Mykolaiv and Kherson — with the route from Odessa to Georgia also passing through the area. Thus, the closure creates a constant threat to all Ukraine’s maritime traffic;

4 — the Azov coast of the Genichesk district of the Kherson region of Ukraine directly bordering the occupied Crimea;

5 — the Azov coast of the city and port of Berdyansk;

7 — the area of the Opuk training ground on the Kerch Peninsula is closed for fire trainings.

According to the Ukrainian Navy Command, the distance from the borders of the closed Sea of Azov regions where vessels of the RF BSF ships and Coast Guard of the FSB Border Service conduct combat fire trainings to the relevant areas of the Azov coast of Ukraine is 4 -5 NM or 7.4 - 9.3 km (Map 5).

1. an accidental or purposeful provocation involving the use of weapons, which can lead to military escalation in the Sea of Azov

2. a naval landing on the Ukrainian Sea of Azov coast from Genichesk to Mariupol, as the coastal relief of the coast is conducive to naval landing

3. a rapid simultaneous blocking of all Ukraine’s seaports in the Black and Azov Seas.

Besides the Black and Azov Sea closures, we must pay attention to the Kerch Strait entrance closures for warships and other — hydrographic, rescue, etc. — vessels of other states (Map 6, p. 8).

It should be noted that it’s the first time that all access to the Kerch Strait has been shut down, as before, the RF used to always leave a corridor between the closed areas. The closure was announced in April 2021 for the period from April 16 to October 31, 2021, i.e., for over six months. Subsequently, the area closure was extended from October 31 to November 15 due to the presence of ​​the three US warships mentioned above.

Thus, in 2021, Russia has demonstrated that when it comes to blocking aea regions under the pretext of military exercises, it has no limits. There is no doubt that this practice will continue. 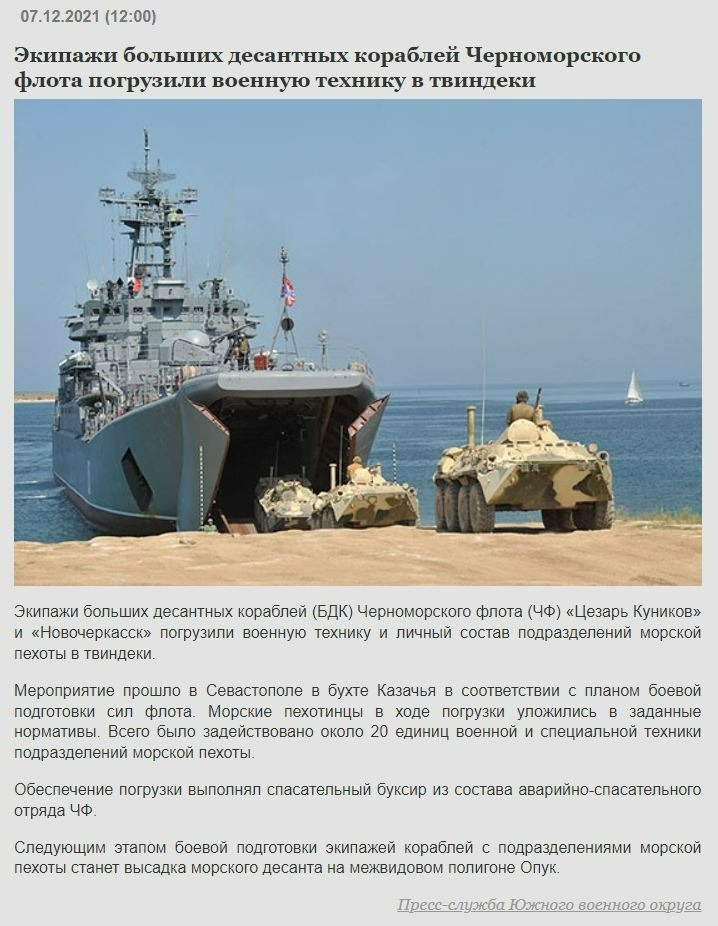 An indirect confirmation of Russia's preparation for a naval landing on the Ukrainian Sea of ​​Azov coast is the situation that developed on December 8, 2021, the very first day of the Azov Sea closure for fire training.

On December 7, 2021, the Ministry of Defense of the Russian Federation announced that two large landing ships (BDK) of the RF BSF, Novocherkassk and Caesar Kunikov, loaded «... military equipment and marine units personnel in Sevastopol» (see photo below). It was also reported that «the next stage of combat training for the crews of the ships carrying marine units would involve the marines landing at the Opuk joint-service range» — that is, in the occupied Crimea.

The Opuk range is located on the Black Sea coast of the the occupied Crimea’s Kerch Peninsula between Feodosia and Kerch (Maps 5 and 6, p. 7).

Thus, the news on the RF Ministry of Defense website turned out to be a purposeful military disinformation. Most likely, on December 8, BDK Novocherkassk entered the Sea of ​​Azov and stayed there until the December 10 afternoon,

which gave it enough time to take part in exercises near the Ukrainian coast and acquaint the crew and marine landing troops with the possible theater of war.

Note that according to volunteers, at approximately 21.00-21.30 EET on December 9, 2021, the RF BSF missile boat Shuya (board number 962) that also unexpectedly appeared in the Sea of ​​Azov, on an open radio channel threatened Ukrainian ship Donbas with opening fire if the latter didn’t change course.

Immediately afterwards, the coast post of the Maritime Guard of Ukraine, on a special open radio channel messaged the RF Coast Guard vessel Korshun (board number 373, code Huys, project 03050) that was at sea at the time, the demand to inform Shuya on the Sea of ​​Azov legal status and that the threat of fire from board #962 was a breach of law.

Right then, on December 9, 2021, that is, during an uncommon presence of a large landing ship and a missile boat of the RF BSF in the Sea of Azov in addition to the usual ships of the FSB Coast Guard, the FSB website published the following news:

At 9:12 a.m on December 9 of this year, the command ship Donbas of the Ukrainian Navy left the port of Mariupol and started moving towards the Kerch Strait.

The Ukrainian side had not submitted applications for the passage of the Kerch-Yenikalsky Canal in accordance with the seaport of Kerch Compulsory Regulations, approved by the order of the Ministry of Transport of the Russian Federation #313 from October 21, 2015. At 13:45, the Russian FSB SS Coast Guard ship accompanying it warned the vessel of the need to comply with Russian legislation in part concerning the filing of the necessary applications for passage through the Kerch Strait. The answer received stated that the ship did not plan to pass through the Kerch Strait. At present, Donbas is located at a distance of 18 nautical miles from the Kerch Strait and does not follow the requirement to change the course. These actions pose a threat to the safety of navigation.

Within minutes that contrived and false statement was picked up by Russia's leading state news agencies, other media and social networks and turned into an already habitual hysterics. The message was also later quoted by foreign media.

We believe that the immediate hysterical reaction of the Russian media to the FSB Donbas report is part of the special information and psychological operation, aimed, among other, at diverting attention from the closure of the Azov sea regions near the Ukrainian coast during the RF BSF vessels’ presence in the area.

Overall, the Black Sea regions closure from November 1 to December 13, 2021 is a now standard situation, while the one in the Sea of ​​Azov shows clear signs of rising tensions and preparation for the marine landing on the Ukrainian coast between Genichesk and Mariupol.

At the same time, the simultaneous closure of access areas to Ukrainian ports in both the Black and Azov Seas for the purpose of naval training may indicate the working out of a plan of a swift simultaneous blockade of all Ukrainian seaports in both seas.

For reference: Ukraine’s seaports handle more than 37% of Ukraine's total international trade volume, including more than 57% of its exports.